Long before the WAGs arrived in Alderley Edge there were Wizards, or so the local legends tell. King Arthur and his men are said to lie sleeping below the local sandstone cliffs protected by Merlin the Magician. However, it was not footballer’s wives or supernatural sorcerers that I sought on my recent visit – but the hearty seasonal splendour that has won the The Wizard Inn a Michelin ‘Bib Gourmand’ for over ten years! 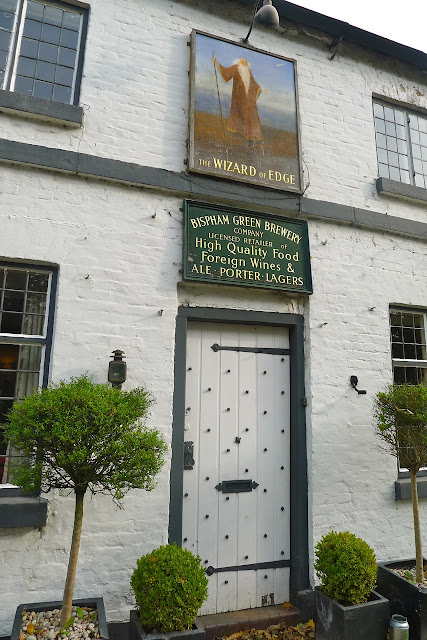 The Wizard is a traditional pub in leafy Nether Alderley, just a couple of minutes from the main shopping street of Alderley Edge and just along from the Alderley Edge Hotel Restaurant (see here). The area is popular with walkers, cyclists and horsey folk; the neighbouring Wizard Tea Rooms catering for those with especially muddy feet and particularly wet dogs. 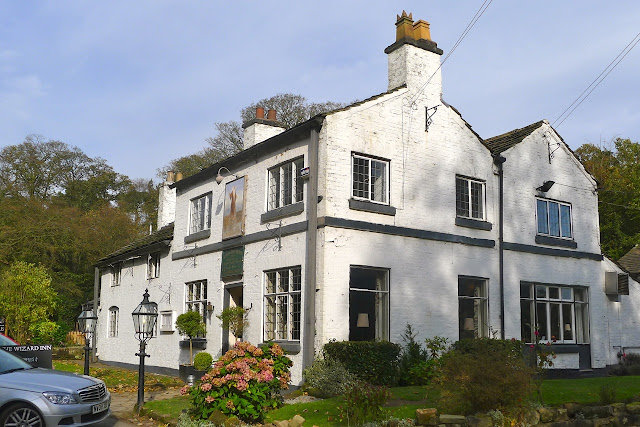 Housed in a quaint white painted building that dates back over 200 years, the pub with its low, beamed ceilings, heavy rustic furniture and open fires couldn’t be more full of character. The walls are adorned with an abundance of pictures; purposefully placed artfully askew? 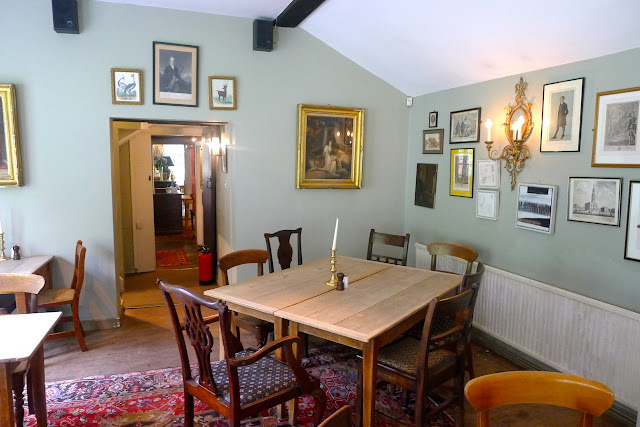 Despite its age the Wizard is well lit, the leaded windows and French doors opening onto the gardens and surrounding Wizard Wood. Over the road, ponies wait patiently to be petted by passing children, out for the day for their family’s fix of country good air. My parents, who were visiting from Spain, really loved the ‘Britishness’ of the place, which is something that they miss in their rural setting. 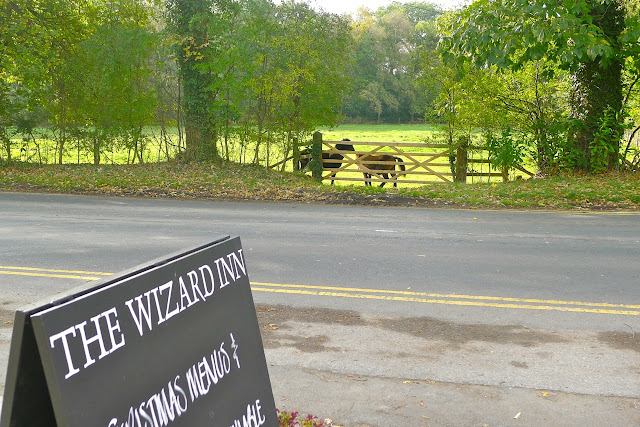 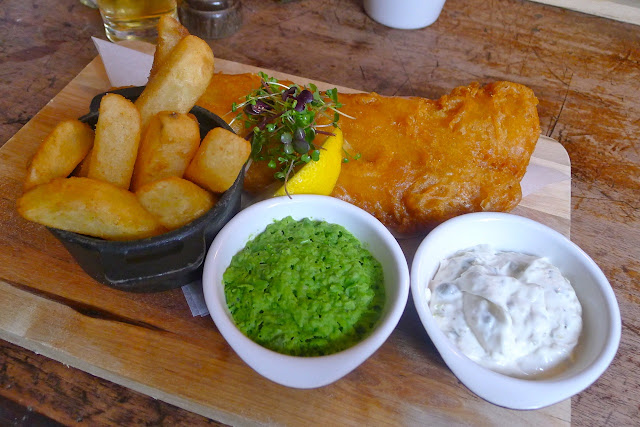 Unable to resist the temptation of a triple cooked chip, I chose the Wizard Fish & Chips. Quirkily served on-board a board the day’s ‘Market Fish’ happened to be haddock – it was well cooked with a crunchy golden batter. The ‘Homemade Tartare Sauce’ and ‘Minted Mushy Peas’ were perfect accompaniments. The ‘Triple Cooked Beef Dripping Chips’ did not disappoint, although I would’ve liked a few more! 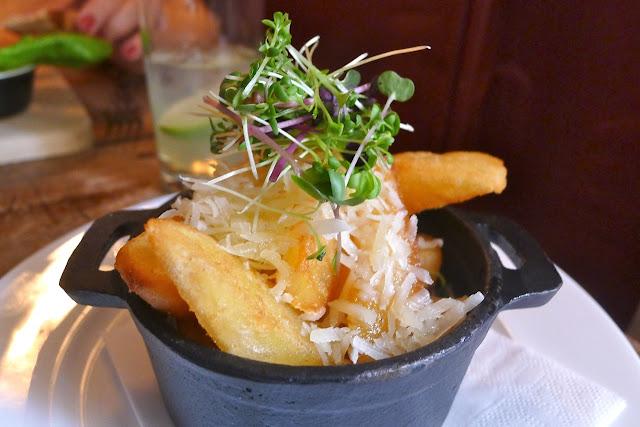 As suspected, the chips that came with the fish were simply not enough to satisfy my greedy gut, so when I noticed Posh Chips on the menu I could not, not try them! So what makes a chip ‘Posh’? Try triple cooking them in beef dripping and then topping with White Truffle and Parmesan! Yes… they were as good as they sound! 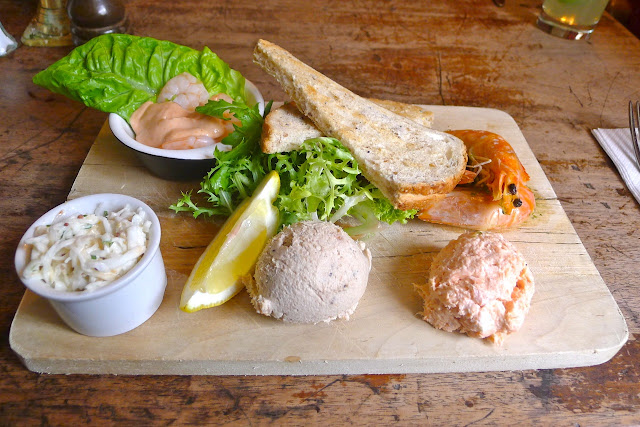 We also ordered a Fish Platter. Which the menu states includes King Prawn Cocktail, Peppered Mackerel Pate, Loch Tay Rainbow Trout, Crevettes, Cod Fish Fingers, Celeriac Slaw & Multi Seeded Bloomer – it’s only now looking at the photo that I notice our platter lacked the promised Cod Fish Finger! Not to worry, it wasn’t missed at the time. Everything was fresh and tasty - my favourite being the deliciously peppery mackerel paté. 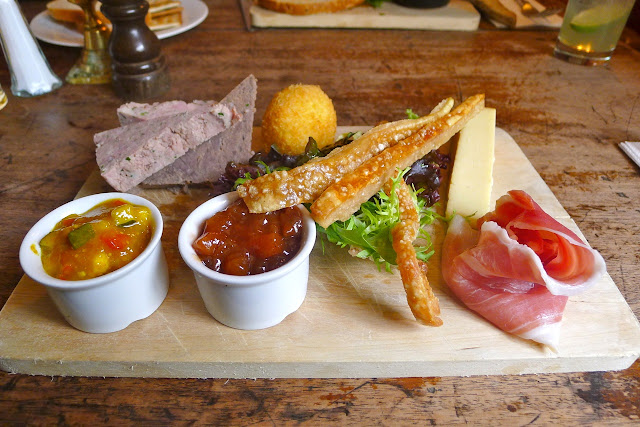 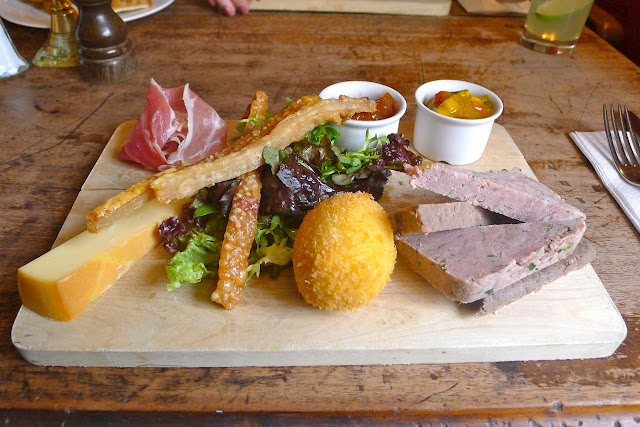 For me, the best parts of the Butcher’s Platter were the ‘Deep Fried Soft Hen’s Egg’ and the ‘Piccalilli’ - the soft buttery yolk perfectly encased in a crunchy breadcrumb shell; the piquant piccalilli probably the best I have tasted!

A magnificent meal and a wonderful place to have so locally – I can’t believe we have not been before! Made all the better by the excellent value for money as recognised by the Michelin Bib Gourmand Award.

To summarise my views on The Wizard, one word - “Magical!”