Simon Radley at The Chester Grosvenor

Chester, in Cheshire, is an ancient and beautiful city that is steeped in history. Tudor revival buildings and cobbled streets provide the town centre with its quintessential British charm. The ‘Rows’ that date from the medieval era (including what is believed to be the oldest shop front in England) are magnificent to walk along when browsing the town’s diverse range of designer boutiques and independent specialist retailers; the department store, Browns of Chester and of course, the big named high street stalwarts.

Walking around the original city walls (the most complete example in Britain), you can see some prime examples of the town’s history from the last 2000 years: the Roman amphitheatre; the Norman castle; Georgian and Victorian buildings and canals as well as the wall itself; including the intriguingly named ‘Goblin’ and ‘Bonewaldesthorne’ Towers.

If you are interested in the Roman period of history, I recommend a visit to the Spudulike restaurant on Bridge Street. I am however, unable to vouch for the potatoes but here, in the basement, you can see an original Roman hypocaust system or ‘under floor heating’.

Although, do be careful if you are Welsh: an archaic bye-law states that any Welshman ‘loitering’ within the city walls after sunset may be shot with a longbow or decapitated. Following the Welsh Revolt, King Henry V passed the law, which was never repealed and still officially stands on the statute to this day (although it no longer provides protection against prosecution for murder).

The Duke of Westminster and his ancestors have, for centuries, owned a substantial amount of land in and around Chester and the Duke’s family name of Grosvenor is inextricably linked with the city: The Grosvenor Museum, Grosvenor Park, Grosvenor Bridge and The Grosvenor Hotel are the more obvious connections. The hotel having been owned by the family since 1815 has always had a reputation for quality. The hotel’s restaurant, Simon Radley at The Chester Grosvenor, is one of only four in the country to have held a Michelin star for over twenty consecutive years (The other three being: The Waterside, Le Gavroche, and Le Manoir aux Quat' Saisons).

The restaurant was previously known as ‘The Arkle’ after a famous racehorse owned by Anne, Duchess of Westminster but was renamed and restyled in 2008 in honour of the Chef that, for such a long period of time, has been so influential in its success. The legendary horse had a short but celebrated career in the sixties, winning the Cheltenham Gold Cup three times before retiring early due to injury. The equine connection can still be seen in the many works of art that decorate the restaurant’s comfortable Arkle Bar and Lounge area.

To learn more about the town’s history, the Grosvenor Museum, on Grosvenor Street, is a great place to head. As is, The Dewa Roman Experience, which has hands-on exhibits and a reconstructed Roman street. Naturally, being a foodist, I was keen to find out what the Romans ate: discovering that the food had many “similarities” to what we ate, that evening, as part of the Tasting Menu. 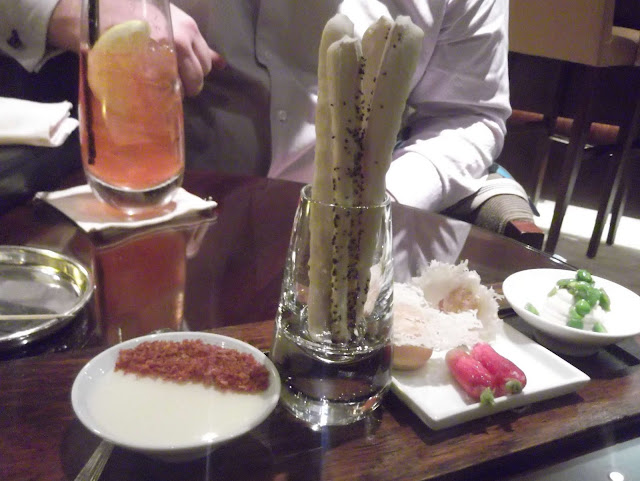 The poorer Romans mainly ate bread, soup and porridge. And after our tasty amuse bouche of White bean mouse with minted peas; Parmesan Gougères with cream cheese and spring radish; Ham hock jelly with crispy bacon and Grissini, which we ate in the lounge, we were shown into the dining room and presented with a trolley of the most fabulous breads that I have ever seen in a restaurant. 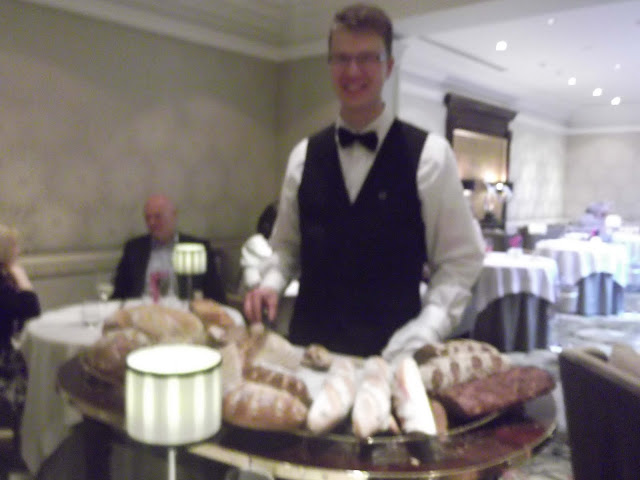 Poor people's small wooden or mud brick homes didn’t have kitchens. So they often took food round to the baker, to cook in his oven. Our breads, freshly made by ‘Barry the Baker’ (who, to me, sounds like a character from a Guy Ritchie movie) were excellent. The choices, which I greedily eagerly worked my way through over the first few courses were: Sourdough; French Baguette; Stoneground Farmhouse; Bavarian Rye; Lancashire Cheese and Onion; Boddingtons and Mashed Potato; Fig and Walnut and Cottage Granary. Sourdough is always a favourite of mine and this one did not disappoint. The real star however, was the Boddingtons (a nod to the Chef Radley’s Mancunian roots?) and Mashed Potato bread – beautifully moist with a subtle malty flavour.

Although the Romans would have regularly eaten soup and salmon, from the River Dee, I am sure never with the refinement of the next course. Simply, with the Chef’s typical understated restraint, called Amuse - a clean tasting cucumber gazpacho, with delicately pickled salmon and a little crunchy texture from delightful miniature croutons.

For ordinary Romans, meat was a luxury, unless they lived in the countryside and could go hunting or fishing. The next course certainly was luxurious (and my favourite of the evening), called Composition - Native lobster, sweetbread bonbons, girolles and summer pea. The girolles had been pickled prior to cooking and added a lovely acidity to the dish. The batter on the ‘bonbons’ was delightfully light and crisp.

Two ingredients that people would not have had access to in the past are Hass avocado and the phenomenal Kalamansi lime (a flavour, I imagine the Chef became familiar whilst working in Asia) which were combined to great effect with Dorset cock crab to produce: Micro crab. One complaint I have, is that my wife appeared to have more of the Kalamansi jelly on hers (or maybe I just said she did so she would give me some of hers?)

The next dish was Morue - creamy salt cod ravioli with local nettles and flowers. Ancient Romans, despite their ‘Italian’ origins would not have had ravioli; Roman soldiers did however bring their own nettle to the British Isles. I don’t know if they ate them, but they did use them during long, cold and wet marches, to stimulate circulation on their tired and pained legs, using a practice called ‘urtification’. Personally, if they are going to be prepared with the skill and creativity of Simon Radley, then I’d rather stick to eating them.

Richer Roman ‘citizens’ had food cooked at home in the kitchen by slaves. They ate dinner in late afternoon, with a starter, a meat course followed by fruit or nuts.  Our meat course was Landaise duck breast with Stuffed neck salami, crispy rillette, fondant liver, and olive. The neck salami was stuffed with pistachio nuts, which provided a great texture variance. The duck rillete kromeski was full of flavour and delightfully crunchy. My only criticism was the duck was a little too chewy for my taste. The lightly sautéd duck liver in olive oil was sublime. 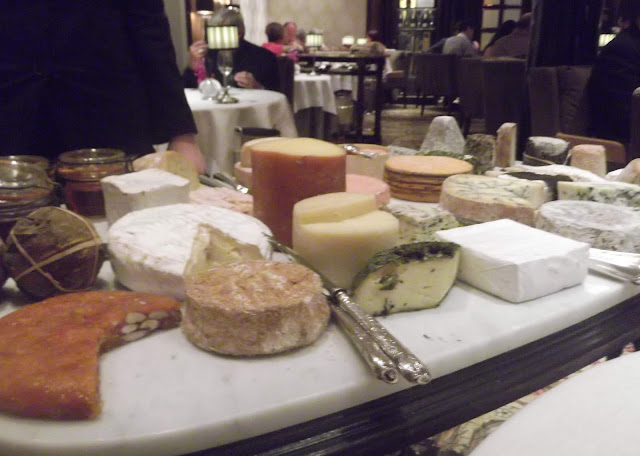 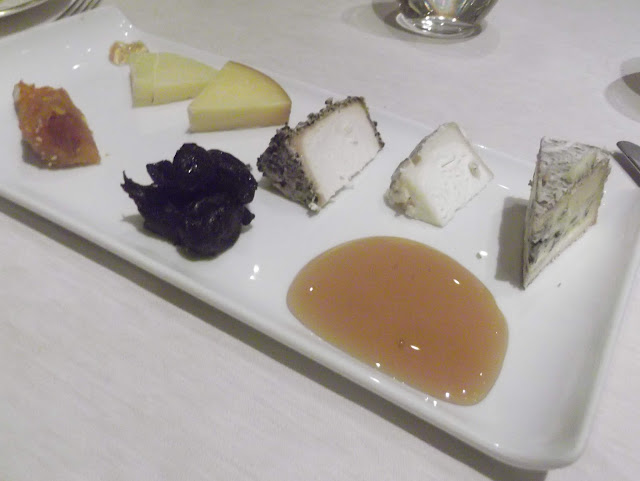 We followed our meat course with cheese from the board as an alternative to the Crumpet - Fig and apricot, organic Cheddar listed on the menu. The cheese and condiment selection at Simon Radley is superb.

Romans would serve lettuce at the end of a meal, believing it helped them to sleep. Fortunately, instead of a salad leaf, we were served Trifle.  A refreshing palate cleanser consisting of an elderflower jell, concealing a delicious plump gooseberry. The Romans certainly had gooseberries, as mentioned by Pliny the Elder in his book Naturalis Historia published circa AD 77-79 (around the time of the Roman’s arrival in Chester).

The final offering on the tasting menu was Forét Noir - Caraibé chocolate textures, warm cherry. An imaginative and innovative take on the classic pudding – it was tantalising to watch the thin disc of tempered Caraibé chocolate melt and sink as the warm cherry sauce was poured on.  The ‘cherry on top’ was a cherry on the top made more lustrous by a slither of gold leaf.

So there we have it; I’m sorry if you clicked onto this blog expecting to read about food and ended up with a history lesson. If that is the case, I’ll summarise for you: Simon Radley at The Chester Grosvenor is a magnificent restaurant and well worth visiting.