Due to the fact that we eat out at least three or four times a week, I generally do not blog about every meal. Preferring instead to write about ‘fine dining’ or places that are in someway special or unique. I wouldn’t consider Tai Pan to fall into either of those categories, but we have just enjoyed a memorable meal there. (Firstly, let me apologise for the quality of the pictures; as an unplanned post, I did not have my camera with me and had to use my iPhone.)

Having hardly eaten anything all day, we were on our way back from visiting family on the other side of Manchester when we decided that we would visit Rusholme’s Curry Mile ‘thought, (according to Wikipedia) to be the largest concentration of South Asian restaurants outside the Indian subcontinent’. Having been disappointed on our last visit to our regular ‘Punjab’ (famed locally for its Dosas) I got on to twitter to seek recommendations from my foodie friends and followers.

The overall consensus seemed to be that the quality of food available in Rusholme has been in steady decline over the last few years and that the cafes around Cheetham Hill are among the better places to get authentic, quality curries. As a result, we double backed and decided instead to go for a ‘Chinese’ having just passed Tai Pan on Upper Brook Street. 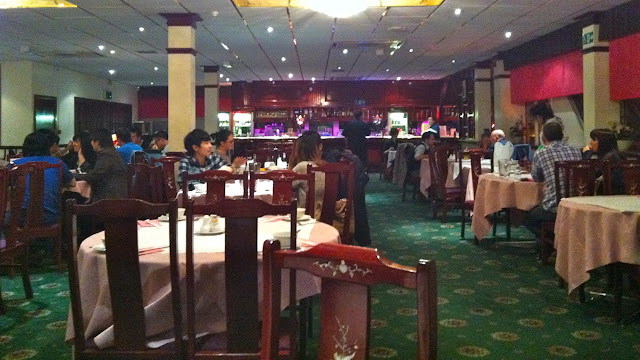 Tai Pan (translating as ‘Supreme Leader’) is a delightfully dated stereotypical kitsch Chinese restaurant in the finest 1970s style. I half expected Jim 'The Dragon' Kelly to come swaggering in to the sound of Isaac Hayes. The cavernous space has the characteristic office style suspended ceiling and large round tables surrounded by gloriously gaudy lacquered chairs. The tables are dressed with pink damask tablecloths, set with paper napkins and plastic chopsticks. Golden dragons, red lanterns and pictures of pagodas, storks and lilies complete the décor.

Despite having been recommended on a number of occasions by a Vietnamese friend of ours, this was our first visit to Tai Pan - even though we have often visited the W H Lung Cash and Carry that the restaurant sits over. One of the reasons for not having been before is that over the past few years I have generally fallen out of love with Chinese food… at least, most of the Chinese food that is abundant in the typical takeaway or restaurant. 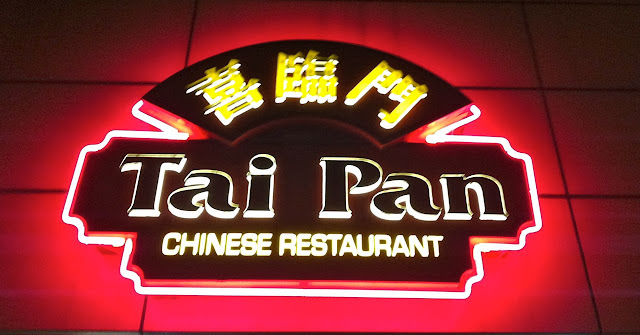 Another reason is that, in 2009 Tai Pan were fined a record £70,000 for 'absolutely outrageous' food hygiene standards. Of course, they sorted those problems and the Food Standards Agency ratings website now rates them as ‘generally satisfactory’ – which translates as roach free – always a bonus! 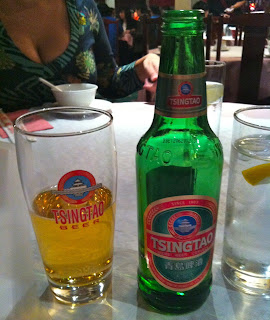 There was a time when I would have eaten Chinese takeaway or restaurant food at least once or twice a week. Nowadays, if I want Chinese food I am more likely to cook it fresh at home or opt for another Asian cuisine, preferably Japanese, Thai, Malaysian or Indonesian.  We arrived to find that a good 80% of the diners were of an East Asian persuasion, which we took as a positive sign that good quality authentic food was available. 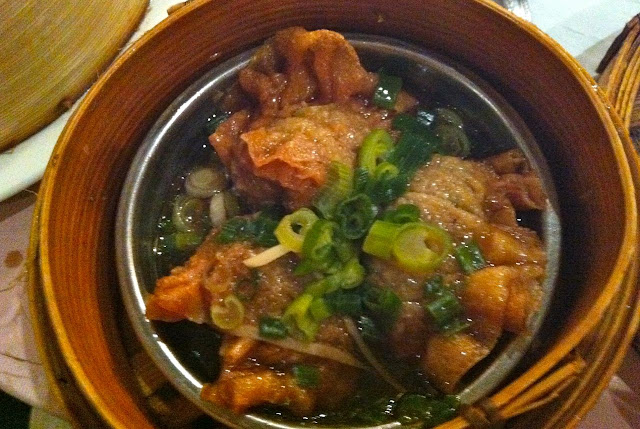 We began to peruse the huge menu, which features an impressive selection of Dim Sum. My wife selected Gern Chun Ow Yuk, which are Beef Dumplings with Ginger and Spring Onions. A tasty dish served in a steamer with an unctuous sticky sauce. 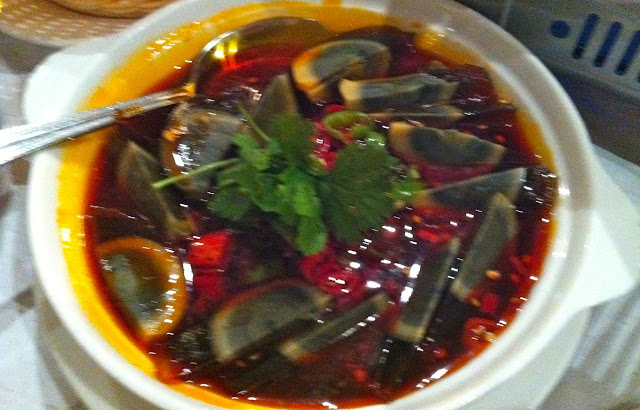 I chose the cold starter, that I have been wanting to try for a while, Preserved eggs with grilled chilli – also known as century eggs, hundred year eggs, thousand year eggs, and millennium eggs. They are made by preserving for around one hundred days using a mixture that includes charcoal and lime. As a result, the albumen (white) turns into a translucent brown jelly and the yolks develop a green hue and creamy texture. The preservation technique raises the alkalinity of the eggs, which gives them a strong flavour and ammonia like aroma. Now that I’ve had them, I’d definitely choose them again. They had a cheese like flavour and were delicious with the fiery chilli oil. 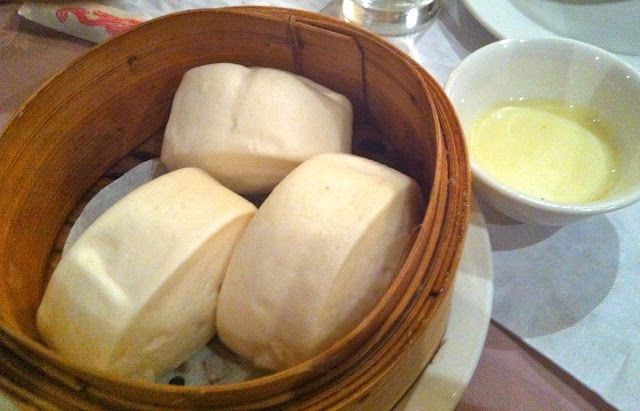 To soak up the chilli sauce, I also ordered my favourite steamed buns, which came with condensed milk. It’s easy to make these buns at home and they freeze so well and go with so much. 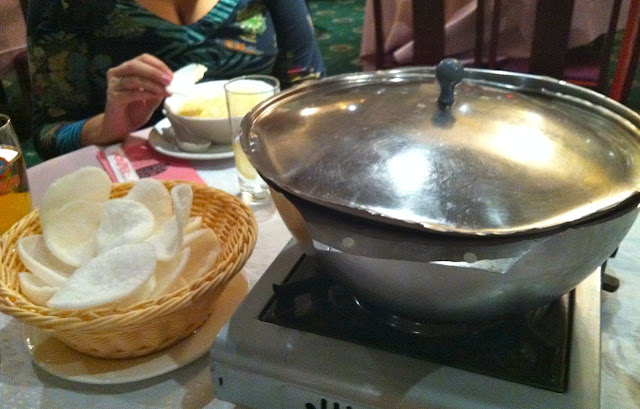 Noticing a group in the corner with a large steel pot on their table, I went over to their table to have a nosey and discovered that they were sharing a ‘Huo-guo’ or ‘hot pot’ (Not to be confused with Betty’s hotpot as served up just two miles down the road in the Rovers Return) Asking our waitress, I was informed that this dish was not featured on the ‘English’ version of the menu but we could have one if we so desired.

Our waitress advised us that the portions were large and that we’d manage with a ‘two person portion’ – I have a huge appetite, so we also ordered a boiled rice and a fried rice, just in case. The ‘steamboat’ urn had two sections so we chose to have a spicy ‘Tom Yam’ style broth in one side and a plain/vegetable in the other – a sour taste was also an option. 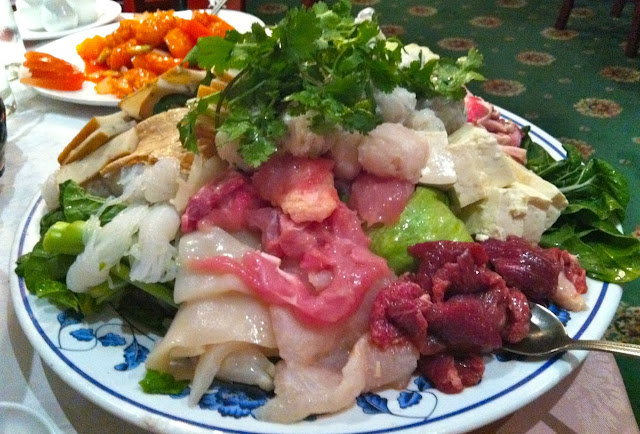 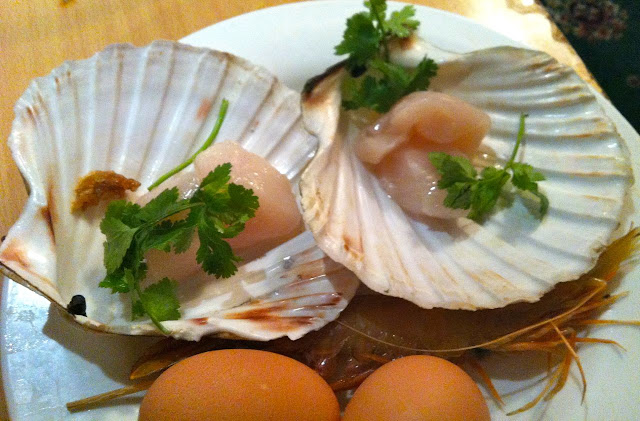 Then a side trolley arrived which had on board another plate featuring several fresh Scallops, six Large Prawns on Skewers and two raw Eggs. Our waitress placed a selection of the ingredients in the broths and cranked up the heat – minutes later we were feasting on some of the most flavoursome and fresh food I have ever eaten in a Chinese restaurant. Not a grain of MSG in sight. 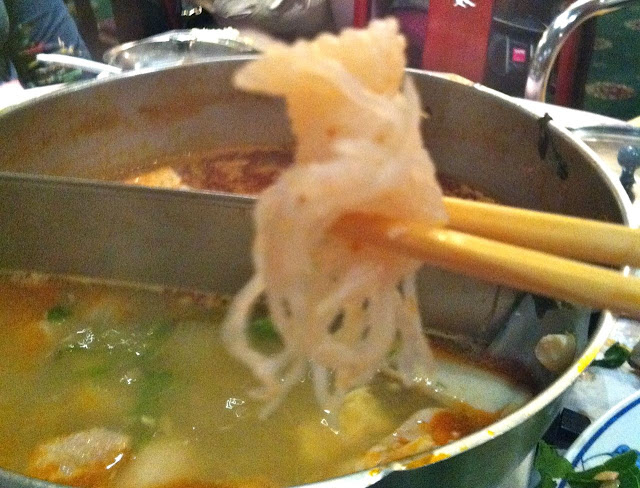 Once the waitress had demonstrated how to cook ingredients such as the beef for just a few seconds by dipping it in and out with the chopsticks she left us to cook at our own pace and to our liking. We’d boil up a batch; turn the pot to a simmer while we ate and then go again for more. After a good few bowls and having removed the peak from the mountain of food, my wife and step-daughter were becoming a little over faced… but I bravely soldiered on. 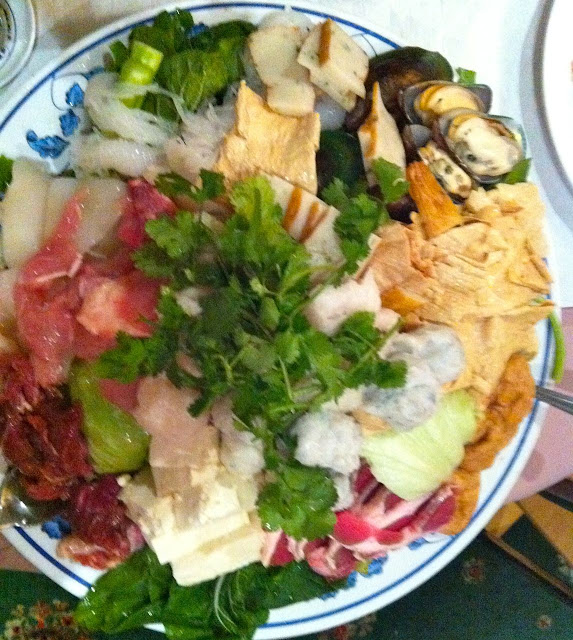 It was wonderful to have the contrasting broths - enjoying the balance from having some of the food cooked in the plain broth with its clean fresh flavour with some in the spicier Tom Yam, which was heavily flavoured with lemongrass and had a real chilli kick. 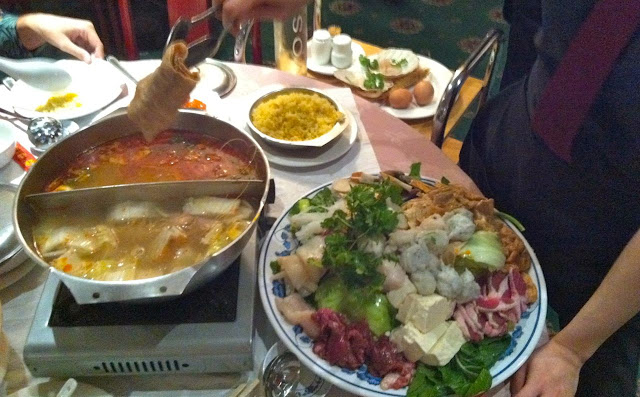 The fish and vegetables cooked this way were particularly enjoyable and were enhanced by the broths, the ‘boiled’ meat less so. I love Tofu and most Soya derivatives – but this was the first time that I have had the bean curd paper in this form. I expected it to have the soft texture of the Japanese fried tofu pouches ‘Aburaage’, used in Inarizushi but this dried form has a much firmer texture and is very nice. I’ll definitely be buying some to cook and experiment with. 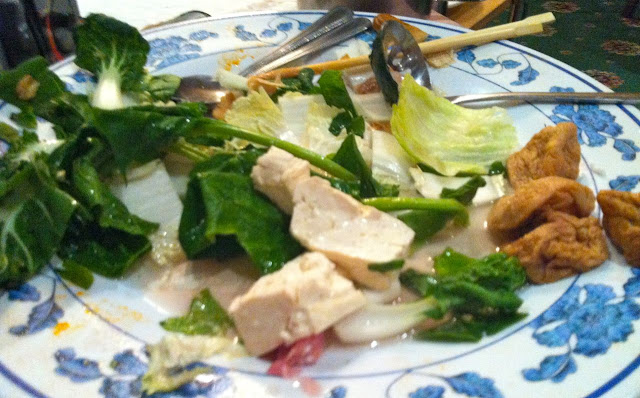 My hollow legs were slowly becoming full and despite the fact that the rice remained practically untouched, the mountain of food had been reduced to a mere molehill. Certainly not the most refined meal that I’ve eaten, but a filling flavoursome and fun food experience. I’d love to return with a larger group of friends and enjoy the exquisite preserved eggs and social ‘steamboat’ again.