You’ve heard of Victoria, Geri, Emma, Mel B and Mel C… but let me introduce you to the spiciest Spice Girl – Monica.

Monica (and family) run ‘The Spice Club’, heralded Manchester’s first supper club. Supper clubs or ‘secret supper clubs’ have been all the rage ‘down south’ and in the US for quite some time. If you haven’t heard of the concept… (What planet have you been on? - just kidding!) they work something like this: keen amateurs transform their homes into restaurants for the evening; advertise through social networks, blogs, tweets and by word of mouth; guests register their interest and book; the location is revealed; they arrive; eat; drink; be merry; pay a suggested donation and then boast to all their friends and colleagues about how trendy they have been!

Manchester was late to the party, but since The Spice Club’s launch, just over a year ago, they have rapidly grown in popularity. One reason cited for their success is that people are looking for a cheaper alternative to dining at a restaurant; for me it’s about seeking out food cooked with passion and sharing the experience with likeminded foodies.

I first met Monica and her brother Aj when they were invited, along with myself and other ‘key food people from Manchester and London’ to the Chroma Knives charity evening with Aumbry Restaurant, Aiden Byrne and Gizzi Erskine. Their friendly natures and love for authentic, quality home cooked Indian cuisine was enough to convince me to attend one of their events.

When, via Twitter (@TheSpiceClub) I saw that two places were still available for their upcoming ‘Indian Vegetarian Feast’, I booked our places and waited eagerly for details of the secret location to be revealed. 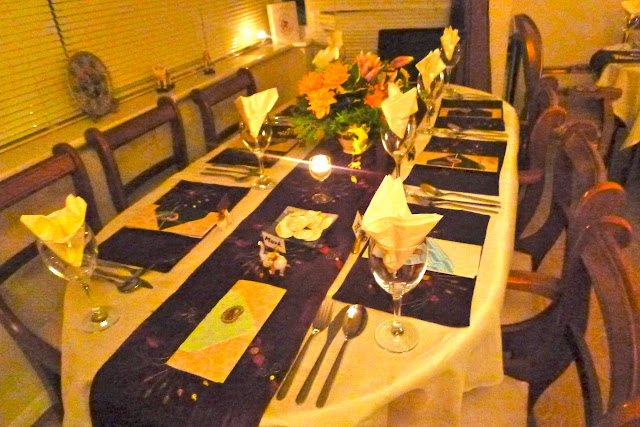 Arriving unfashionably early, my wife and I were greeted wonderfully warmly by Monica, her proud mother Anita and the most amazing smells coming from the kitchen, that the two of them had been working so hard in throughout the day. With the aid of three large dining tables, lavishly dressed in maroons, reds and gold, the family’s lounge had been transformed into a sumptuous dining room. Soft lighting, fresh flowers and candles enhanced the welcoming ambiance. A parade of papier-mâché animals held the name place cards of the twenty-four hungry curry fans who would be sharing the evening and unique dining experience. 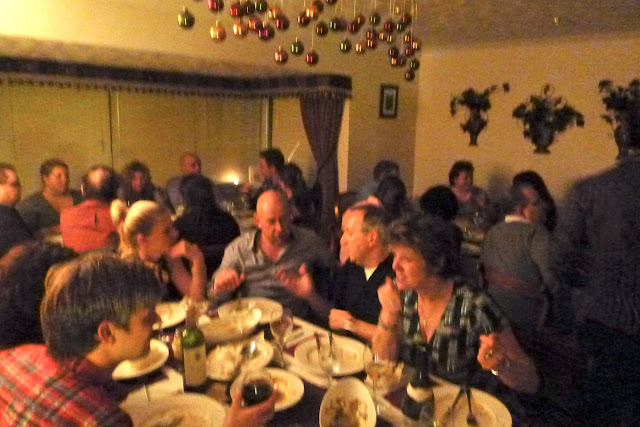 As people started to arrive, conversation started to flow as people got acquainted. Questions such as, ‘Is this your first supper club?’ ‘How did you hear about it?’ ‘Are you vegetarian?’ and ‘What do you do?’ helped to break the ice. Apart from a love of food, we soon found things in common. Of the eight people sharing our table, four were teachers; one was thinking of getting into teaching; one was a chef and another a mental health unit manager.

Despite just three of our number being ‘full time’ vegetarians we were all looking forward to the vegetarian delights as we perused the beautifully presented menus. Another thing that we had in common… we were all supper club virgins. I’m what I call a ‘part time’ vegetarian; I rarely eat meat at home or for lunches at work. When out, and eating à la carte, I tend to choose the meat free options or fish/seafood dishes. I will only have the meat if we are having a tasting menu.

Having just read about the two people who ended up in A & E in Edinburgh after participating in a 'world's hottest chilli' charity competition eating the ‘Kismot Killer’ and witnessing the Manchester Food & Drink Festival Chilli Eating Contest, my wife was a little concerned about eating at a place called ‘The Spice Club’. Her fears were soon allayed however when the food turned out to be delicately spiced and flavoursome, as opposed to fiery. 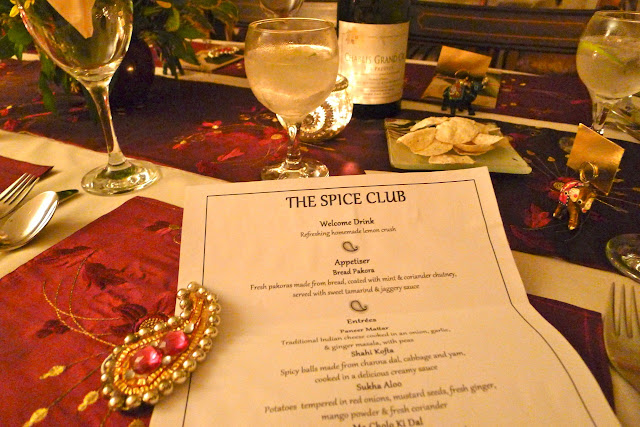 Our meal started with some mini poppadom bites and a Welcome Drink of Refreshing homemade lemon crush. Guests were also invited to ‘bring their own’ and the tables were laid with wine glasses. Aj acted as maître d' and, as well as being on hand to ensure the guests were being well looked after and the evening was running smoothly, kept peoples glasses topped up, including jugs of ice cold water. 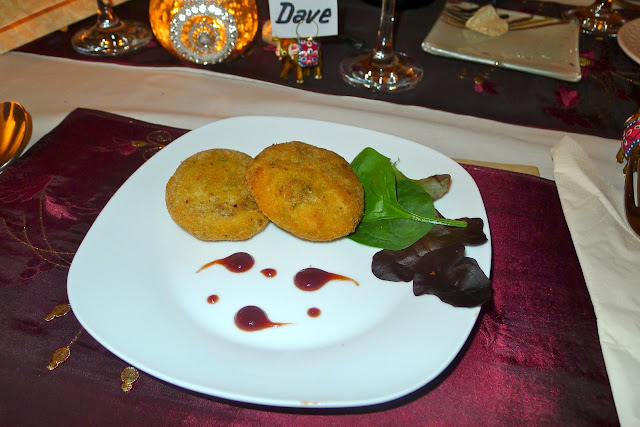 The meal started with a Bread Pakora appetiser. The fresh pakora was made from bread, coated with mint and coriander chutney, served with sweet tamarind and jaggery sauce. I have never heard of bread being used as a filling for a pakora before but for me and the rest of the table, it worked really well. Jaggery is a type of palm sugar that some Indians believe brings good luck and is often eaten at the beginning of new ventures or enterprises – a fitting way to start the meal.

Following the starter, the flowers and table decorations were cleared for the entrées, which were served ‘family style’ down the centre for sharing. The dishes were: 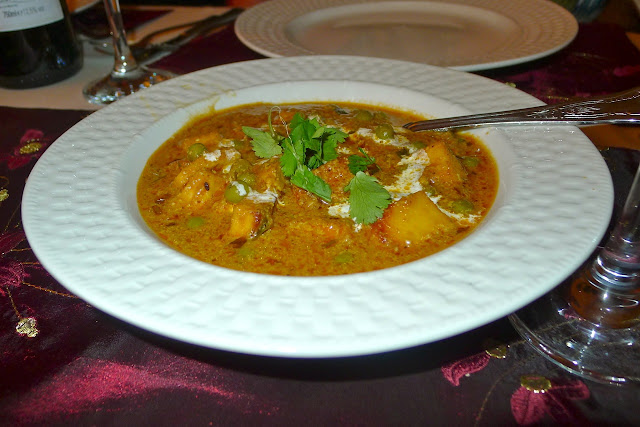 Paneer Mattar - Traditional Indian cheese cooked in an onion, garlic & ginger masala with peas. This dish was my wife’s particular favourite. I have since made a version at home using Monica’s recipe that is available on her Spice Diary – Indian Food Blog. It’s sure to become a Hoss family favourite! 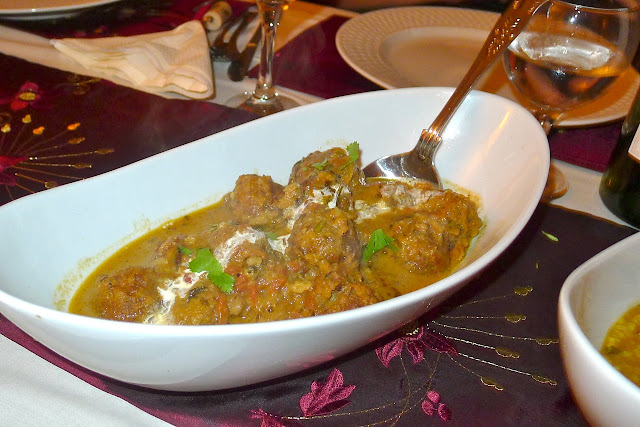 Another popular dish amongst the guests on my table was the Shahi Kofta – Spicy balls made from channa dal, cabbage & yam, cooked in a delicious creamy sauce. The texture of these balls was particularly pleasing, the pieces of channa dal (split chickpeas) within adding a delightful nuttiness. 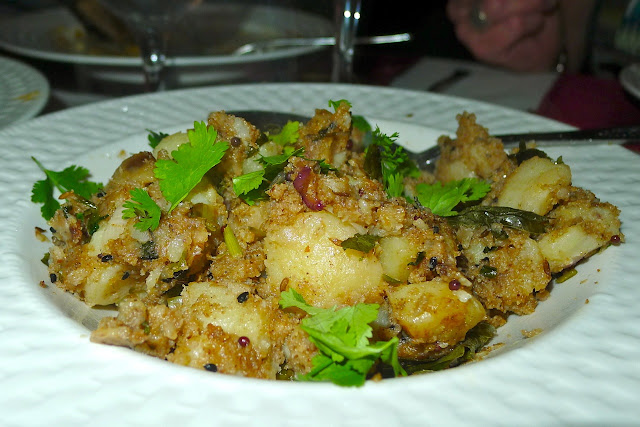 My personal favourite dish was the Sukha Aloo – Potatoes tempered in red onions, mustard seeds, fresh ginger, mango powder & fresh coriander. I’m not generally a huge eater of potatoes but this dish was wonderful. I have been cooking a lot with mustard seeds recently and enjoy their texture as much as mild spiciness. Mango powder is something I have not cooked with before but will definitely be experimenting with as an acidulant in the future. 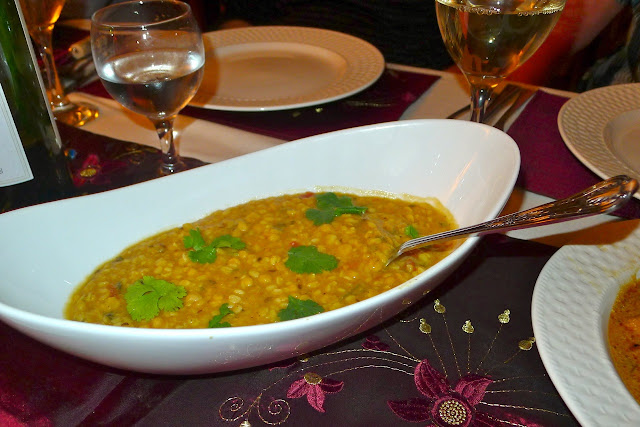 Ma Cholo Ki Dal – Urad and channa dal lentils blended together and cooked in a delicious fresh Punjabi tarka. Tarka is the method of flash frying whole spices in oil or ghee (all The Spice Club’s dishes are cooked in olive oil) to free the oils and enhance their flavours. 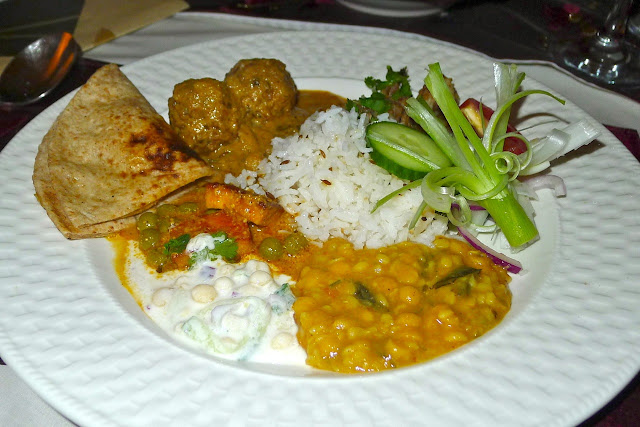 The entrées were accompanied by Basmati Rice, Fresh Hot Chapatis and the traditional North Indian Boondi Raita. The Boondi is made from fried droplets of gram (chickpea) flour batter, which is then blended with yoghurt and mixed with roasted ground cumin and fresh mint. 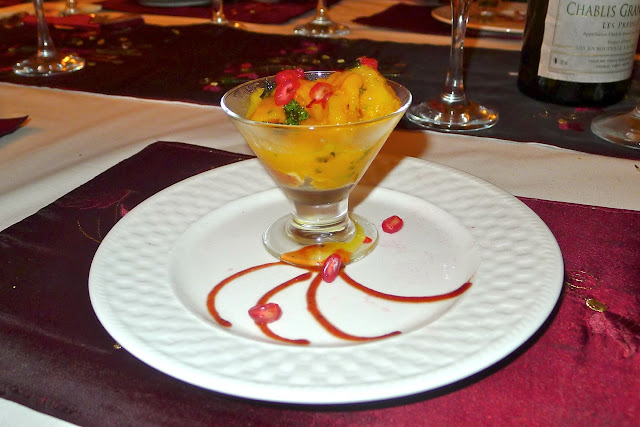 For dessert we were treated to a refreshing, homemade Mango Sorbet topped with mint sugar and fresh pomegranate. The Spice Club’s trademark subtle and flavoursome use of spices were added to the artistically arranged coulis, pleasingly spiced with cumin and a hint of cardamom. 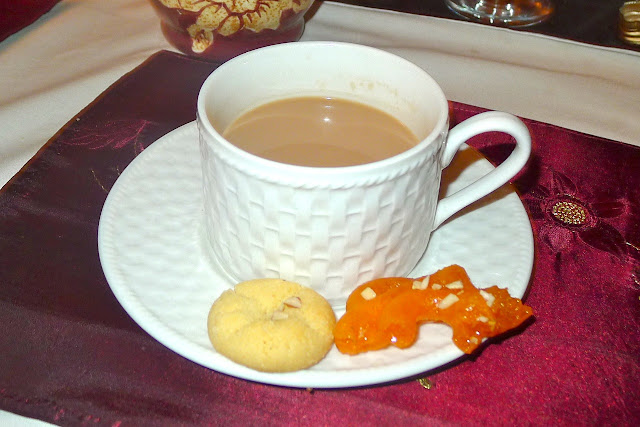 Of all the dishes on the menu, the only one that I was a little apprehensive about was the Cardamom Chai Tea – served with traditional Indian biscuits. I drink a lot of green, white and yellow teas, but generally avoid blue (oolong) and black teas. The thought therefore of a black tea, laced with spices and milk was not appealing to me in the slightest. However, the tea had not been over steeped and the spices were delicate. In fact, I enjoyed it so much, I even drank my wife’s - a fitting end to the meal.

I may have been late but now that I have officially climbed aboard the bandwagon and am no longer a supper club virgin, I’ll definitely be seeking other secret suppers and will be looking for permanent membership to The Spice Club.