The Routemaster Bus, the Fender Stratocaster Guitar, the Aga Cooker, Levi 501 Jeans, the Supermarine Spitfire and Converse Chuck Taylor All-Stars - a list of classic design icons that could go on and on.


Ok then, I’ll give you a few more… it’s great fun thinking of them: A Rolex Oyster Perpetual, Clarks Wallabies, the VW Beetle, the Dualit Toaster, the Zippo Lighter, the K6 telephone box, the Raleigh Chopper…


The best of their kind? Perhaps so… or maybe not? After all, Chris Hoy does nae ride a Raleigh Chopper! One thing they do all share however is the status of being absolute design icons. Classics. They each have an enduring quality - an excellence. They have stood the test of time and hold a permanent place in our hearts. The originals. The innovators. The trendsetters.


You can see where I am going with this, can’t you? There is one more that I must add to the list - Le Gavroche.

What can I possibly write about this celebrated colossus of cuisine that has not been already written?

You will know that Michel and Albert, the legendary Roux Brothers opened it 1967. You will have read that it was the first establishment in the UK to be bestowed one, and then two and then three of the coveted Michelin stars. You will be aware that Marco Pierre White, Philip Howard, Marcus Wareing and Gordon Ramsay all trained there. The only London restaurant in Les Grande Tables du Monde. And, we all know it is now in the superbly skilled hands of the master of the professional master-chefs, Michel Roux, Jr.

Booking a Michelin starred restaurant always makes me feel special, but when I booked Le Gavroche I felt more that that – I felt honoured. Privileged. Then, after much anticipation, as our taxi dropped us outside the famous address, those feelings came flooding back. A quiver of excitement travelled through me as I looked up to behold the sign above the door, and thought of the glitterati that have graced the grand gabled doorway.

The splendour continued, as we were welcomed into the lavish and elegant bar area. The plush red walls, oak furniture and artworks are delightfully dated – like those in a stately home. As we descended the stairs to the dining room, the opulence and magnificence came into it’s own. The low ceiling reinforced the ambience of an exclusive Gentlemen’s Club. Adorning the walls, original works by Picasso, Chagall, Miró, Giacometti and Dalí aspire to feed your mind as effectively as the artists in the Roux kitchen feed your appetite.

The finery of the table settings was exceptional. Crisp white linen, crystal glasses and bespoke polished silver, featuring Gavroche, the street boy or urchin from Les Miserables, that inspired the restaurant’s name. Unique sculptures crafted from silver cutlery sit prominently on the tables providing a talking point, fun and individuality to the tables. A quirky touch was the plates featuring an image of Michel Roux Jr. (One thing that I didn’t welcome being on the table was the little card offering for sale, signed copies of the chef’s books – this felt a little cheap.) 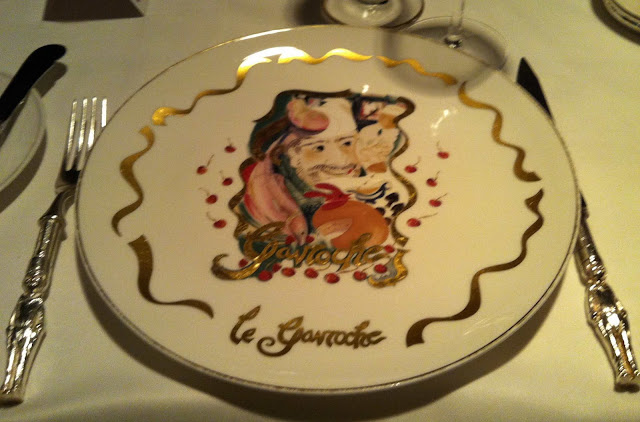 As we took our seats, I was excited to note that sitting on the next table was the mighty Albert Roux himself. His presence and aura as the head of the Roux Empire and as a person was immense. It was great to imagine what may have been going though his mind as he sat, surveying this restaurant, which he established all those years ago and how proud he must be to eat the food prepared by his son, continuing his legacy.

The real majesty of Le Gavroche comes not just from the old school luxury of the dining room but from the flawless service and fabulous food. I am not going to go into detail about every aspect of the menu. Suffice to say, each dish, both my wife’s choices and my own, showcased the finest produce, and were, as you would expect, cooked and seasoned to perfection.

One stand out memory was the lemon, honey and mustard dressing on the second of our amuse bouches, which was simply divine! Naturally, I have had this classic flavour combination many, many times but the balance between the flavours on this occasion was wondrous; the bitterness of the lemons, the sweetness of the honey and the sharp heat from the mustard working in perfect harmony – simple, masterful cookery.

Another outstanding dish was the Médaillon de porc grille et jus lié a la páte de coing: top-notch, quality pork medallions, teeming with phenomenal flavour. Possibly the best pork I have ever tasted! (The other pig in contention was the one I ate at Northcote Manor).

Another amazing part of the meal was my Plateau de fromages – the cheeseboard was the largest and most comprehensive I have seen in any restaurant. After much deliberation and feeling like a kid in a sweetshop, I chose five French cheeses. A Crottin and a fine Camembert au Calvados caught my eye; I then opted for two of my favourites in a Beaufort and a Livarot. My fifth and final choice was a cheese, which I have never tasted before, Boulette d'Avesnes - conical shaped with a soft and crumbly texture, ensconced in a rusty-hued beer-washed rind, flavoured with paprika. The cows milk curd itself had an intense herby flavour; predominantly tarragon with peppery and parsley notes and a hint of cloves. I’ll definitely keep an eye out for this one in the future – an intriguing cheese to have on any cheeseboard - a real find.

Our key waiter for lunch was Assistant Manager, Enrico Molino. Enrico presented with a faultless balance of attentiveness – as an individual, the best service I have ever received. General Manager, Emmanuel Landré came over to our table at the end of the meal – a thoroughly charming man and a testament to the renowned impeccable Le Gavroche service created by his mentor Silvano Giraldin, the godfather of ‘The Art of the Table.’
Our lunch at Le Gavroche was a truly special dining experience. Le Gavroche is classic. Le Gavroche has an enduring quality - an excellence. Le Gavroche will now hold a permanent place in my heart. An original. An innovator. A trendsetter…  In the words of Michel Roux, Jr. Le Gavroche is, “Top notch!”

Le Gavroche has ranked as high the Restaurant Magazine's 22nd Best Restaurant in the World (2008).