Leaving my wife on the balcony of our hotel with a bottle of Anís del Mono, meaning ‘The Monkey’s Anisette’ and some nibbles, I decided to brave the midday sunshine and walk the mile or so down the Avenida de la Constitución to a charming restaurant - Restaurante “La Ermita” en la Plaza de Toros; located under the porticoes of the bullring. 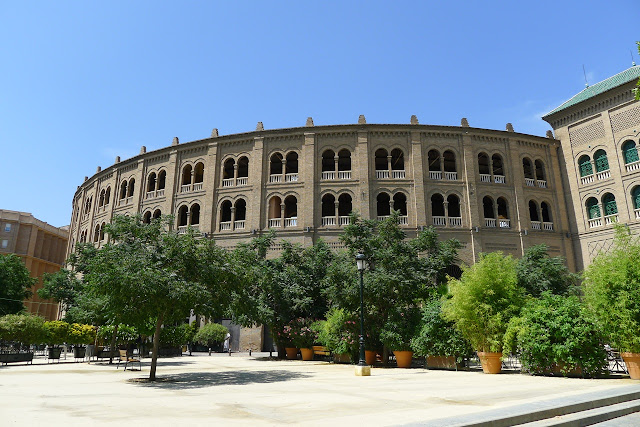 One of the largest in Andalusia with a capacity of 14,500 the bullring first opened in 1929 and is still in use, although the popularity of bullfighting is waning among the younger Spanish generations. 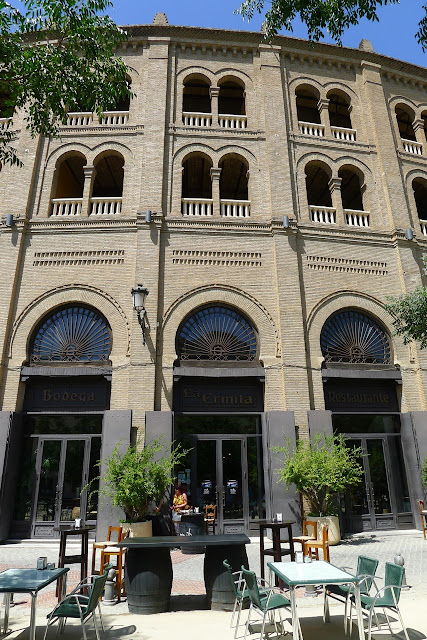 Despite eating there on a couple of occasions in the past, I have since tried to become a little more mindful of what I eat; eating more sustainable, local and organic products and have also been choosing to eat much less meat, toying with the idea of giving it up altogether. Bearing this in mind, I did consider whether I wanted to eat at a restaurant so connected with such a ‘sport’. 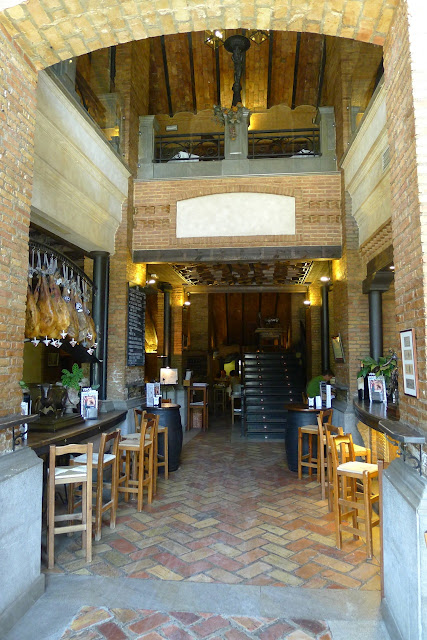 Three factors managed to override my moral compass: firstly, a respect for the culture that I am visiting and its traditions; secondly, the fact that famous, former veggie Sting (he now eats meat which he has raised) played a concert at the Plaza de Toros the previous month and if he, being much more of an activist than myself, didn’t have a problem with the whole idea, then why should I? thirdly, because I remember the food there being damn tasty. A bit of a ‘sell out’ to the cause, I know! 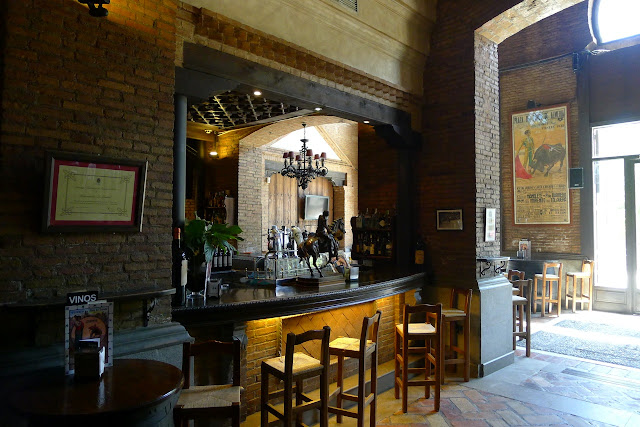 Many historic artifacts and bullfighting memorabilia adorns the walls of the restaurant, including: posters, photographs, artworks and statues. There is also a large bull’s head; stuffed and mounted and overlooking the main dining area. At the time of eating, I tried not to imagine how it may have endured a slow, torturous death amid barbaric cheering in the area above. 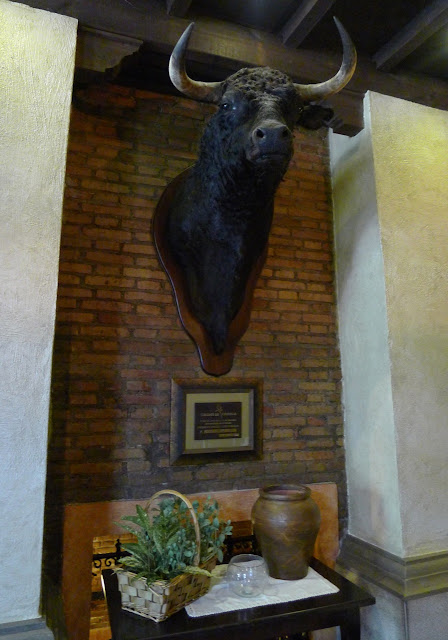 Instead I remembered my dad’s favourite joke, saying “It mush have been shifting when it hit the other side!” and the Ellen Degeneres classic, “Stuffed deer heads on walls are bad enough, but it’s worse when you see them wearing dark glasses, having streamers around their necks and a hat on their antlers. Because then you know they were enjoying themselves at a party when they were shot.” 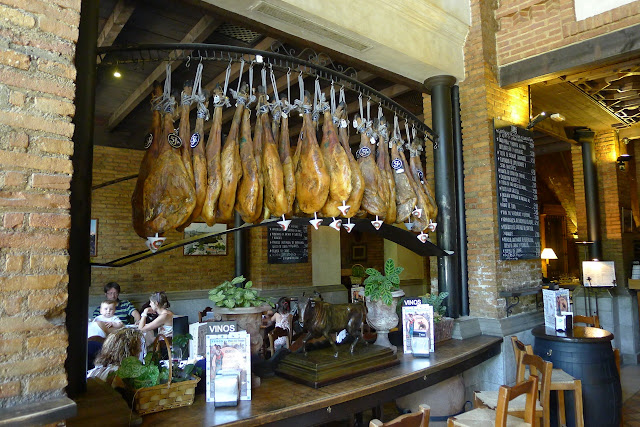 Putting aside personal views of bullfighting and animal rights, the restaurant’s location and interior certainly is impressive and a ‘must do’ for those in Granada hoping to get a taste of Spanish culture. The exposed brickwork, stone floors and dark wood are all characteristic of traditional rustic décor; the obligatory barrel tables and hanging jamóns complete the picture. 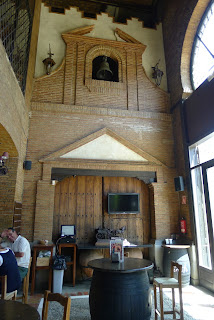 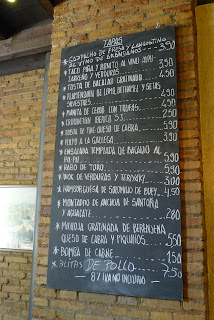 As you enter, the bar area serves a less formal tapas menu and caters for the younger crowd. The soft lighting towards the rear of the venue, along with beautifully set tables with linen tablecloths and napkins provide a more formal or romantic setting. Semi-private dining spaces above and below the stairs are perfect for families or groups. 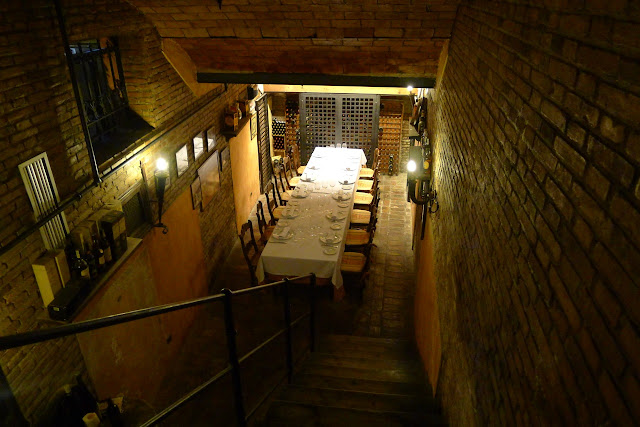 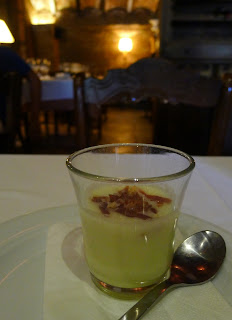 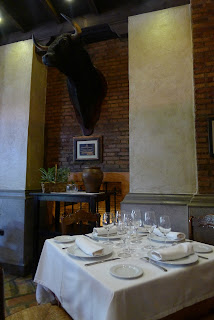 My lunch started with an amuse bouche featuring an apple (manzana) flavoured cold soup topped with fine slivers of jamón ibérico – an interesting take on the classic pork and apple flavour combination.Instead of ordering a starter and a main, I decided to order a tapas dish, two starters and ‘una media ración’ (a half sized main portion.) 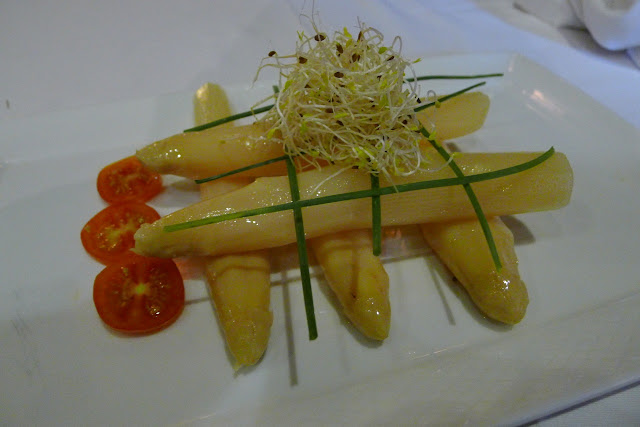 The first dish to arrive was, Espárragos blancos de Navarra - white asparagus from the autonomous Navarre region of Spain, bordering the Basque Country. White asparagus is a favourite of mine and the Navarran stuff is said to be the best – this was served far too cold and subsequently lost some of its delicious subtle flavour. 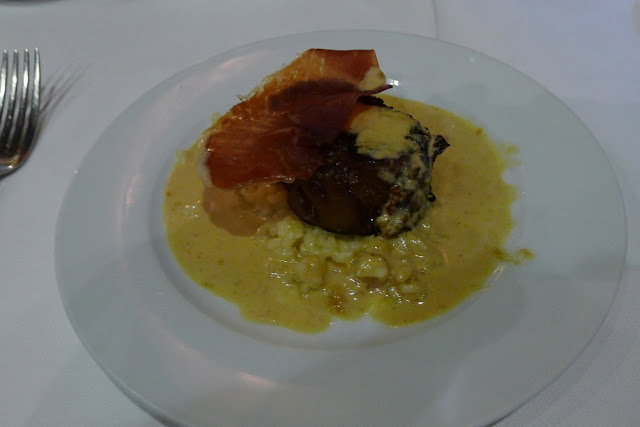 The tapas dish, Manita de Cerdo con Trufas was the next to arrive – not quite Pierre Koffman or Marco Pierre White standard this was a tasty enough dish. The pig’s trotters were well cooked and meatier (as opposed to fatty and gristly) than many I have had; although I did struggle to taste any truffle but for €4.50, I don’t know quite what I expected. 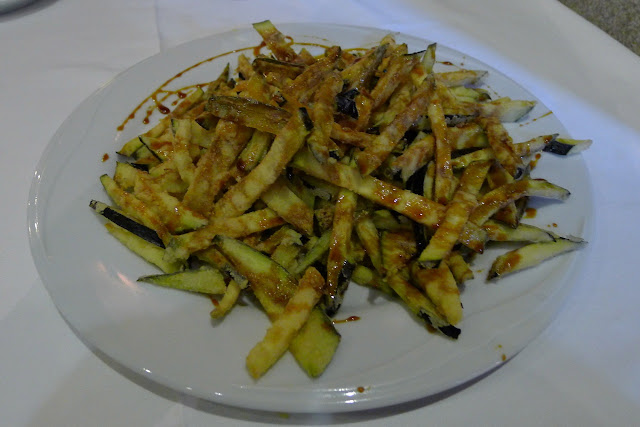 The next ‘starter’ to arrive was a mountain of Berenjena Frita con Miel de Caña – a specialty of Granada, Malaga and the Canary Islands this dish features lightly battered aubergine drizzled in ‘Miel de Caña’, a type of molasses. I can eat, but the size of this portion was a little overwhelming; what is more once I had eaten the top layer coated in the delicious ‘sugar cane honey’ the bottom half was bare (and nobody wants a bare bottom.) 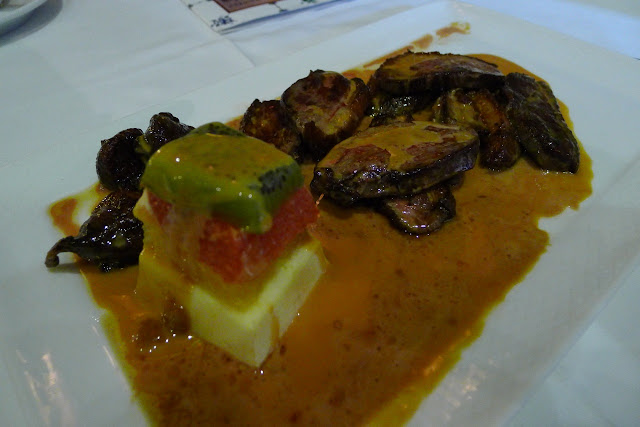 My final dish, Hígado de Pato a la salsa de canela e higos secos –roughly translates as duck livers with cinnamon and dry figs. The figs were great, the livers a little overdone for my preference but still edible. The accompanying apple, orange, pink grapefruit and kiwi tower was largely strange and the cinnamon sauce also lacked quality; worse was the manner in which the passing waiter, obviously in a hurry to get somewhere, plonked it down on the table. 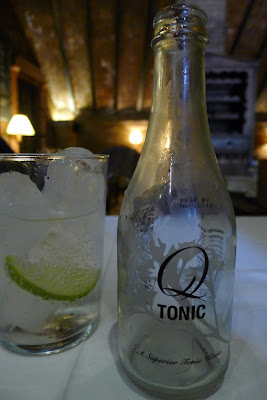