Nutters – Not just a meal but an adventure!

‘Not just a meal but an adventure,’ is the claim made on the Nutters restaurant business cards.  Our meal on Sunday to mark 18 years of successful service, certainly fell into this category.

Andrew’s adventure didn’t just start eighteen years ago when, at the ridiculously young age of 21, he, along with his parents opened their first eponymous Nutters Restaurant. His father Rodney, the genial general manager and sommelier who celebrates his 70th birthday this week and his mother, Jean, who helps with administration and accounts still play a very active role in making the restaurant the truly successfully family run business that it remains to this day.

For the first major milestone in Andrew’s story you will have to go back a further eight years, when as a fresh faced thirteen year old he entered the National Junior Cook of the Year competition, finishing as runner up. At sixteen he then went on to compete against adults in the contest to find the Daily Mail Cook of the Year; it was here as a finalist, that he was offered a job in the eighty strong kitchen brigade at London’s prestigious Savoy Hotel by the legendary Anton Edelmann.

Upon completing this first apprenticeship he went on to gain valuable experience in Michelin starred restaurants across France before returning to London to work alongside Gary Rhodes at The Greenhouse. It was around this time (c.1997) that I first became a fan.

Being at University and needing to learn how to feed myself, I took to watching Ready Steady Cook, on which both Rhodes and Nutter were regulars. As young exciting chefs, I was a fan of their fun and innovative take on British classics and possibly in awe of their spiky hair! So when Nutter started hosting his own shows, such as Remote Control Cooking and Utter Nutter, I naturally watched those too. Soon most things in my repertoire were based on Nutter recipes.

Indeed, Andrew’s ‘Utter Nutter’ book that was published to accompany the television series was the first cookbook that I ever bought. My copy is now well worn and faded but I still enjoy making his famous Bury Black Pudding Wontons and use his simple pancake recipe every Shrove Tuesday.

Fast forward some six or seven years later, I had moved from London to Manchester and wanting to treat my wife asked a colleague what was the best restaurant in the area and was told unequivocally, ‘Nutters.’ What is more, they had just moved up the road, almost doubling capacity from 80 to 150 covers, to an impressive 18th Century manor house. Set in 6 ½ acres of glorious Lancashire greenery with vistas across Ashworth moors the new location soon helped them to win UK Restaurant of the Year. 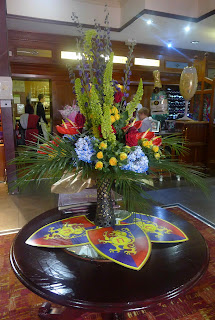 Sometimes when a restaurant moves to a larger premises there is a question over whether the quality will be maintained but if anything, the gothic charm of the impressive building enhances the exceptional food; this is one of the reasons why I have returned many times. The six course ‘surprise’ gourmet menu is always a delight and offers great value for money.

Another plus to the upscaled location is the helicopter landing pad – not many restaurants can boast of having their own helipad which must be a bonus for the likes of Michael Winner who visited the restaurant and gave it a glowing review. 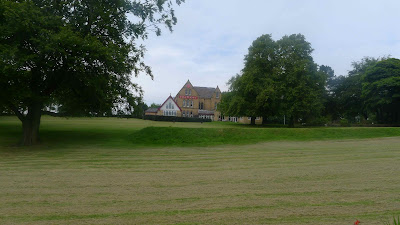 Assuming, as we did, that you choose not to take the chopper, turning off of Edenfield Road; through the grand gated entrance; up the winding driveway; past the manicured lawns to Nutters is always an enjoyable experience, but on the day of Nutter’s 18th Birthday Celebration this was made all the more special by the Bellini cocktail, red carpet, medieval decoration and dress of the staff that were laid on to greet us. I do like a theme! 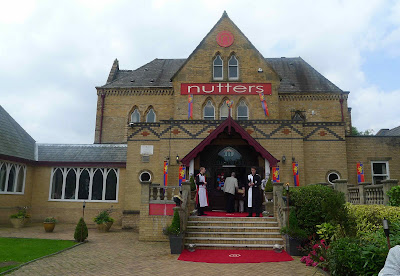 We took our seats in the magnificently decorated dining room. There had been some changes since we were last here including a swanky modern bar and lounge area. This meant that the numerous awards that the restaurant has gained over the years were now adorning the walls of the main space. As too was Andrew’s impressive collection of menus from some of the world’s greatest restaurants, including a section that pays a chronological homage to the famous kitchens in which he has worked. 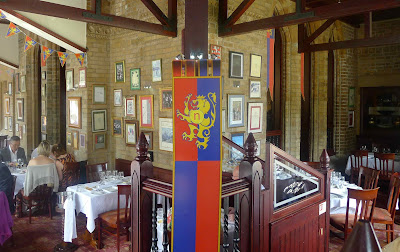 The menu was presented on an ‘aged’ scroll, the first course being a Mini Game Pie & Parfait – the game pie was rich and flavoursome and the parfait topped with a herb butter, served with garlic croutes helped to get us further into a regal banqueting mood. As we ate, The Chicago Teddy Bears Society Jazz Band enhanced our mood further, entertaining us by helping to create a real party atmosphere. 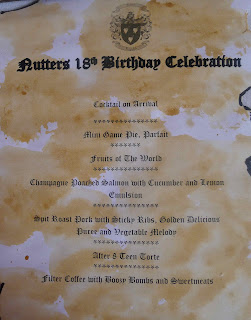 Next, to great applause our chef and host for the evening took to the mike to thanks everyone for coming and to share some anecdotes from the last 18 years. These included the tale of an armed robbery where a 65 year old Rodney was tied up! Andrew also shared some interesting facts, such as having served an estimated 78,000 of those delicious signature Bury Black Pudding Wontons and, showing real commitment to local producers, the 250,000 free range eggs all supplied by a single local farmer (and his hens).

In traditional medieval manner, the next starter was a modern and exotic take on a fruit platter; Fruits of The World – the highlights being slices of deliciously tart blood peach and a refreshing Whimberry sorbet. 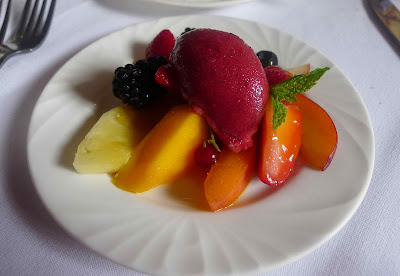 Next up was the celebratory, Champagne Poached Salmon with Cucumber and Lemon Emulsion – a lovely light dish with perfectly poached salmon, fine spaghetti, salty River Dee samphire and a sweet Tomberry dressing. The lemon, dill and chive in the cream cheese emulsion helped to cut through the sweetness of the Tomberries beautifully. 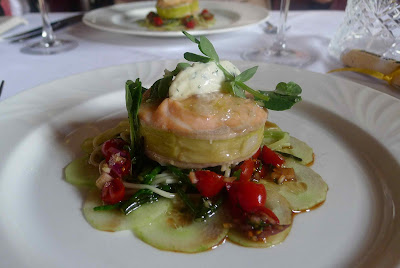 All of a sudden, the band stopped playing and ‘Swing low sweet chariot’ starting blasting from the speaker system. I assumed the band, who were all getting on a bit and had been playing for a good hour had gone for a lie down and that someone had forgotten to turn the master volume down from the earlier speech that Andrew had made on the mike. But the volume didn’t get turned down. 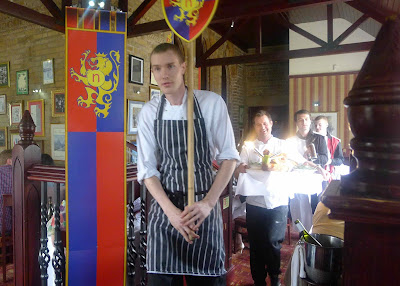 Instead, a flag bearer appeared from the kitchen, followed by Andrew and a procession of waiters, carrying aloft the handsome spit roast hog, complete with apple in its mouth and giant sparklers! What an entrance! What a spectacle! What a pig! 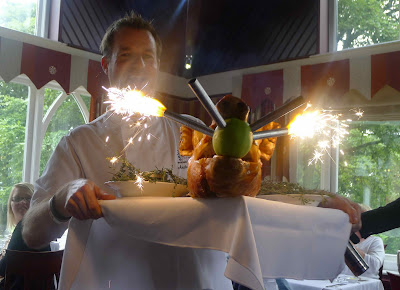 The Spit Roast pork with Sticky Ribs, Golden Delicious Puree and Vegetable Melody was obviously our next course – the mash was smooth and creamy; the Golden Delicious puree, delicious; the pork and sticky ribs meltingly tender, but the real star was the crisp, crunchy crackling - especially the ‘crackling straws’ (my name). 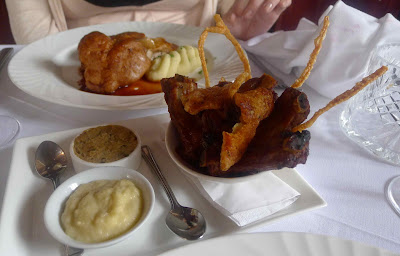 The dessert was a minty chocolate cheesecake, After 8 Teen Torte that was fittingly presented as a clock. (You can see what he’s done there, can’t you?) Mine had been personalised with my Hungry Hoss moniker and a ♯gooseocclock; a kind thank you from Andrew for the bottle of Grey Goose which I bought him to help celebrate after following him on Twitter (@nutsfood). 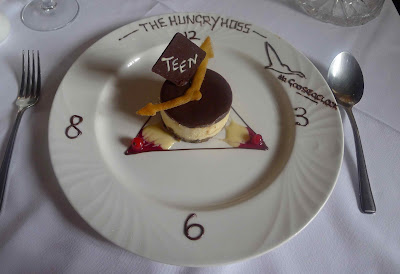 To finish, we were served Filter Coffee with Boozy Bombs and Sweetmeats – my wife bagsied the Grand Marnier and Cointreau flavoured Boozy Bombs and the Marzipan Delice on the understanding that I could have the other five; that’s what a good partnership is all about (me getting two more). My favourites were the Double Chocolate Browny (complete with iced 18) and the Blackberry Marshmallow. 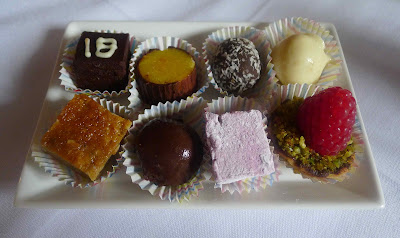 After the meal, Andrew was in hot demand from well wishing regulars and people wanting signed copies of the hot off the press ‘Relish Greater Manchester and Cheshire’ recipe book but between this he still found tome to share a Goose with my wife and I at the bar. All in all, a great day at a great restaurant with a great chef, and his family! Here’s to the next successful 18 years! (I can still imagine a spritely Rodney, at 88, whizzing round the dining room; overseeing the service, schmoozing and sommeliering!) Cheers! 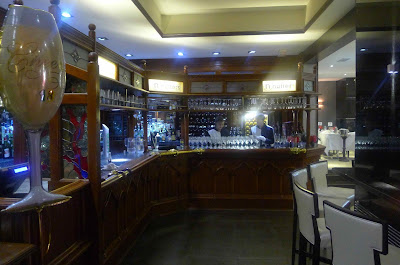 Recently, in an article for the Manchester Evening News, Jean-Christophe Novelli, himself a former recipient of two, believes that Andrew should be awarded a Michelin star. I agree.