Today we decided to return to the scene of a crime. For as far as were concerned Cafe Alhambra in Granada's central Plaza de Bibrambla serves the best churros con chocolate in town and despite the memory of the heinous crime to which we fell foul last time we were there, they are too good to resist.

Let me explain; on our last visit, being the supposed ever vigilant tourist that I am, I had secreted money and bank cards around my person in various secure zipped pockets in an attempt to foil would be thieves. Getting ready to leave, and summoning 'La cuenta' I retrieved my wallet from one such secure pocket to settle the bill. Having paid, I was waiting for my wife to finish her last mouthful of cerveza before standing to resecure my wallet when two 'street urchins' approached, seemingly trying to sell copies of a Spanish newspaper. My rudimentary grasp of the language not sufficient, I naturally smiled and waved them away.

They then became a little more insistent, thrusting the newspaper under my nose whilst simultaneously and rather deftly palming my wallet from the table. I gave chase, but through the busy alleyways their agility and youth soon had the better of me and left me making frantic calls to the bank to cancel cards.

Fortunately, on this visit, thanks to me clutching my newly acquired man bag with one hand, whilst I fed myself the delicious churros with the other, the 'meal' passed pleasantly without incident (unless I include the dollop of chocolate sauce that fell onto my new crisp, white linen shirt.) 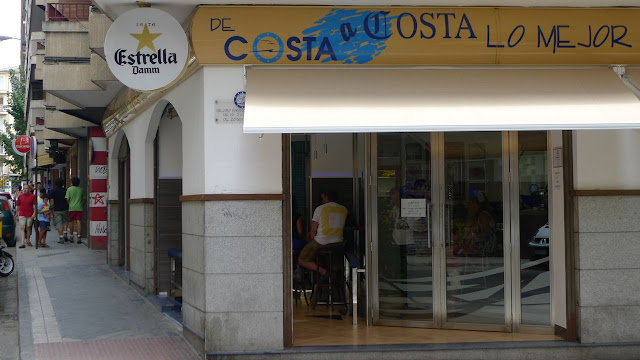 After this late breakfast / brunch / snack we made our way down to De Costa a Costa (From Coast to Coast), the place that I, with a little help from my Michelin app, had selected for lunch. The seafood specialties and Michelin's summary as 'Excellent management with friendly service. Modern interior, nicely decorated in a seafaring style, with a regular local clientele.' being enough to warrant the short walk away from the town's busier thoroughfares to this side street in a quieter neighbourhood. 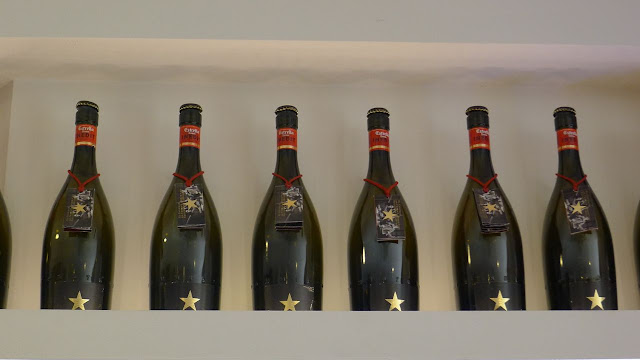 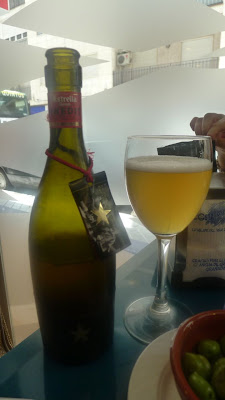 In the window, rows of the Ferran Adrià Estrella Damm Inedit beer, which I had been eager to try, made the first positive impression. I am not a beer drinker but being a sucker for branding or celebrity endorsements, I am willing to try anything that the culinary god Ferran Adrià puts his name to! My wife, who does like a beer, said it was light and fruity (apparently flavoured with coriander, orange peel and liqourice) To me, it just tasted like beer but I was still excited to be drinking an elBulli beer! 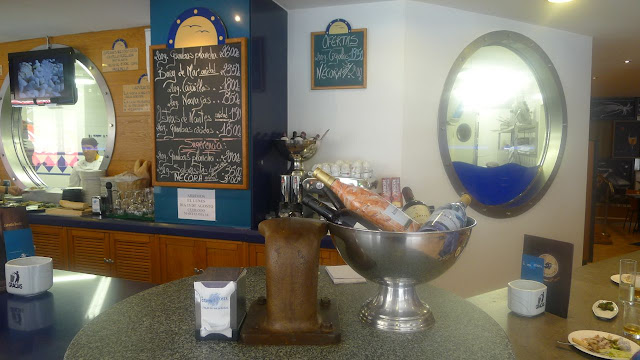 The venue itself was indeed both 'modern' and ‘seafaring' in style. The bar area resembled a boat; oversized steel portholes looked through into the busy kitchen; chalk boards displayed the catch of the day; wooden planks set in white stones imitated groynes; the blue and white tableware had a modern fish motif; the light fittings resembled sails and wavy patterns run around the walls. Marinistic photography and artworks completed the décor. 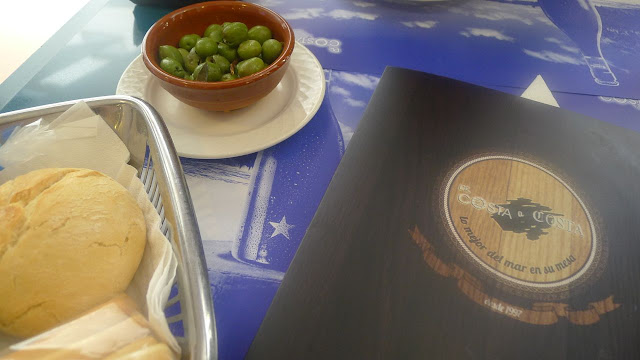 We arrived early for lunch and the place soon filled up with a seemingly local crowd, which made for a lively and energetic atmosphere.  The friendly service that Michelin mentions was certainly evident. The staff were attentive and smiley; their sunny personalities, echoes of the glorious Andalusian weather. Despite the language barrier, the staff were pleased to talk to us about the dishes and make recommendations (including the excellent setas con gambas). 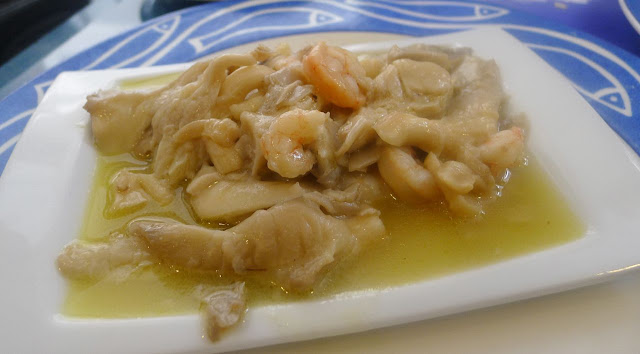 Setas con Gambas - I'm not too sure what the actual difference (if any) between champiñones and setas is, but this mushroom and prawn dish certainly was champion! The cooking juices were so flavoursome, perfect for mopping up with the hard Spanish bread. We often jokingly call the Spanish breads bricks, although they are soon softened up with a plentiful supply of oil and vinegar or in this case the garlicky sauce. 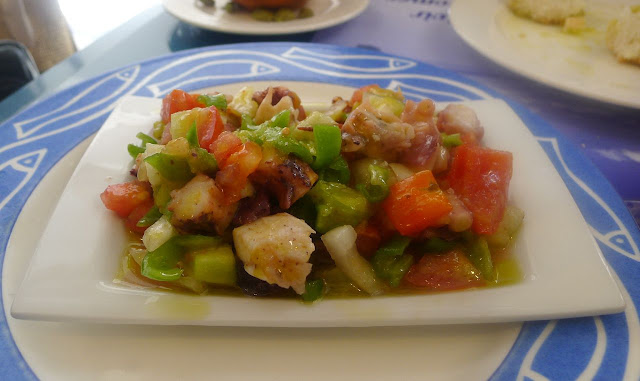 Salpicón de pulpo - I commented to my wife the same thing that I said in Barcelona's Cal Pep, Tapa ç24 and Inopia, what all these establishments have in common is that they serve up food that has the same appearance as any other tapas style eatery in the country, yet they seem to be able to impart much more flavour into their dishes. I can only assume that the freshness and quality of ingredient, oil and seasoning makes the world of difference. 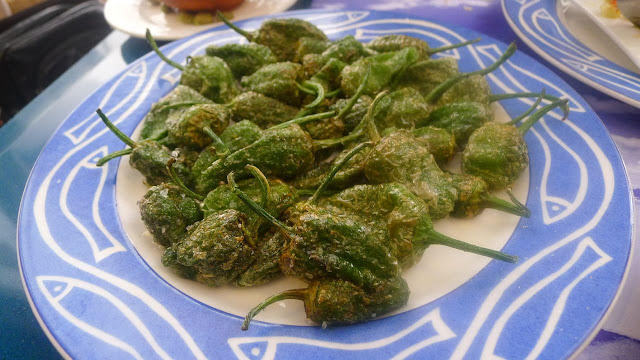 Pimientos de Padrón - proper peppers (all too often small peppers are passed off as the real thing) from Padrón in Galicia result in a kind of peppery Russian roulette. Fried in olive oil, coarsely salted and mostly sweet, the thumb sized peppers occasionally throw up a fiery surprise. Around one in five will contain higher levels of 'capsaicin' giving credence to the Galician phrase, "Os pementos de Padrón, uns pican e outros non." or "Padrón peppers, some are hot and some are not!" Hot or not, all are delicious! 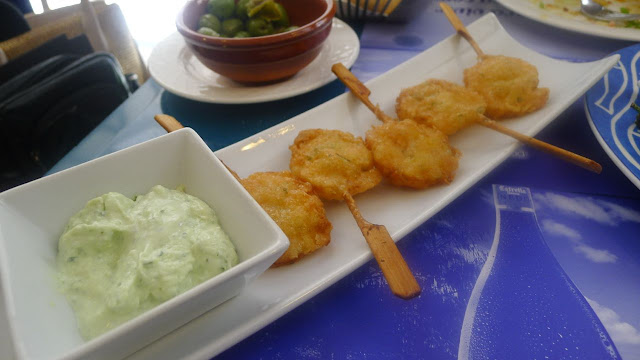 Piruletas de langustinos - translating as langoustine lollies these were lightly battered and accompanied by a parsley mayonnaise.  Very tasty. I've said it before and I'm not ashamed to admit, I do like food on a stick! 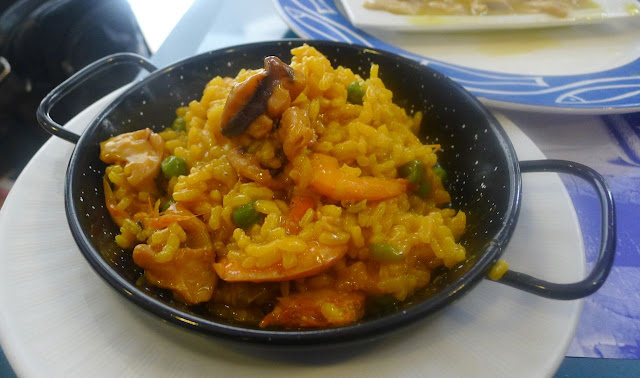 Paella del día - a tapas dish provided on the house or 'gratis', made with real saffron, as opposed to the artificial colouring that is all too common, this was a great example. Featuring meaty chunks of pulpo and sweet little prawns. 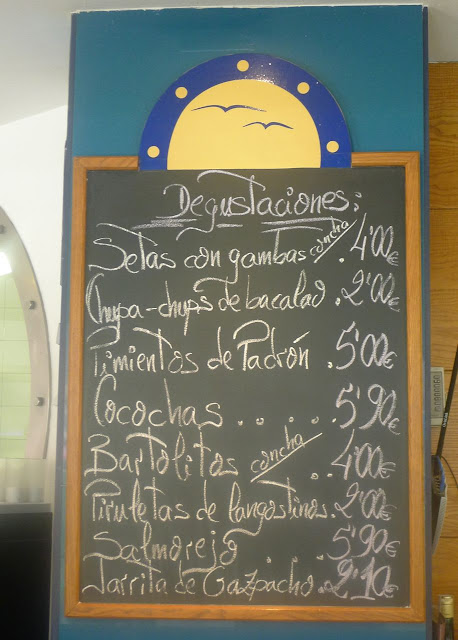 The one disappointment was the fact that they were out of percebes (or goose barnacles). These resemble witches fingers and are an Iberian delicacy; one that I am still yet to try.

All in all one of the best seafood specialty tapas bars that I have eaten at outside of Barcelona – pretty good going for a town that isn’t even on the coast!