Arriving in Granada, armed with the 2011 Michelin Guide to Europe App on my iPhone, the plan was to find some traditional tapas joints and eat like 'reyes' or kings!

Granada does not have any starred restaurants and we have visited it's better, or at least more formal, establishments on our previous stays in the city. Hence the reason for the decision to locate the best of the tapas bars. What Granada lacks in terms of Michelin rated eateries it certainly makes up for in historical wonderment - the famous Moorish citadel and palace, the Alhambra, being the one of the cities and indeed Spain’s major tourist attractions.

Since our last visit the shops seem to be getting a little trendier with the opening of a store from the hip Spanish fashion label Desigual and a number of other designer boutiques off of Mesones and Puerta Real. On the downside there also seems to be a rise in the amount of political graffiti, homelessness and beggars. It is certainly one of those cities where you feel the need to be extra vigilant with your bags and belongings.

Sitting in the reception of our hotel (Hotel Abadia - a charming Moroccan inspired establishment at the wrong end of town, and one that we have stayed in now a number of times. I wouldn’t necessarily recommend it, but we love it) I went through the Michelin App marking off on the map the places that seemed to fit the brief. Words and phrases, such as: 'traditional' 'charming' 'regional specialties’ and 'rustic atmosphere' being the ones that caught my eye.

The phrase 'Closed August' seemed to recur quite often. (Away from the coastal areas many Spanish businesses traditionally close for their own holidays throughout this month.) Still, I managed to draw up a ‘hit list’ and plotted them onto my map. Eagerly, we set off for Casa Enrique - after a hot but pleasant walk across town, taking in a few of the cities historic sites we arrived to discover that Michelin's 'endearing tavern-style' translates as ‘no seating.’ As charming and authentic as this place was, we really needed a sit down. So, onto the next place on the list La Fábula, fortunately just around the corner. 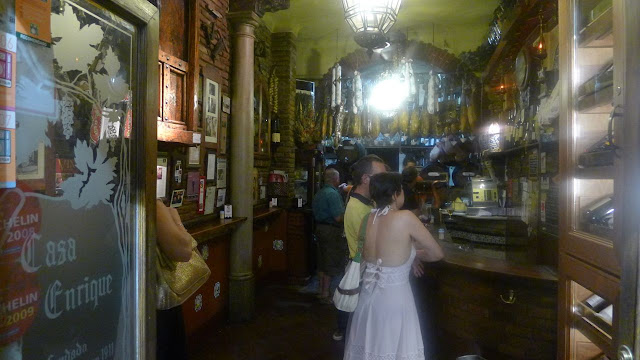 Unfortunately, as I was informed by the smiling girl on reception of the adjoining hotel, this too was 'Closed August' something my faithful Michelin guide had neglected to mention.  Checking the map and Michelin app and finding no other listings in the immediate area, our options as we saw them, were go back to Casa Enrique to stand and eat, or, 'risk' eating at, heaven forbid, an unrecommended establishment! We stood for a moment weighing up the possibilities when it occurred to me; why not ask the smiling receptionist if there is anywhere 'good' and local that she could suggest? 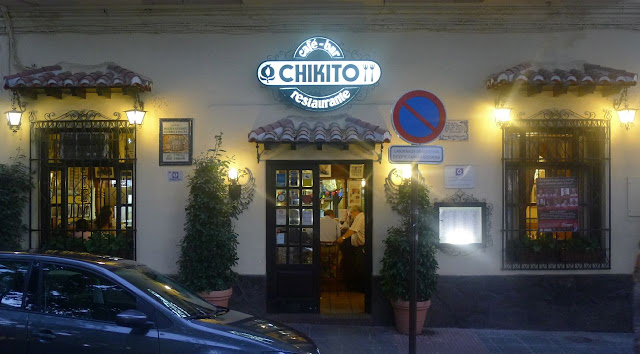 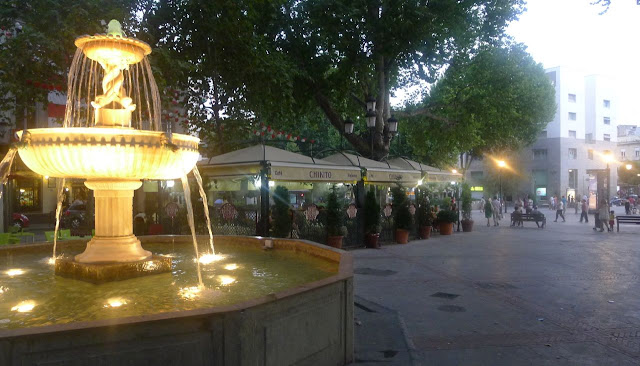 After much shrugging and scratching of her head and then asking a colleague who did the same our prospects of a decent meal that evening seemed to be fading. That was until another colleague, who had now been brought in on the debate, with an apparent Eureka moment suggested 'Chikito'. The shrugging gave way to enthusiastic nodding of agreement between the three. We were quickly on our way, following what seemed like simple enough directions. 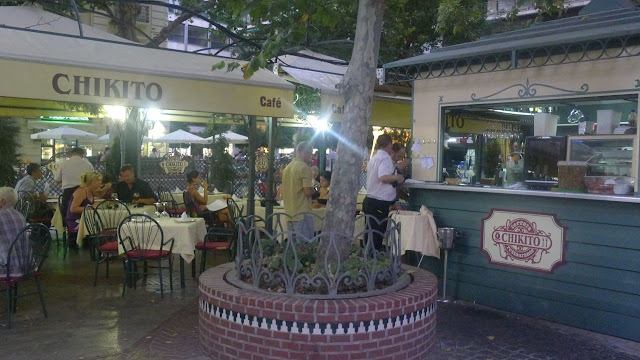 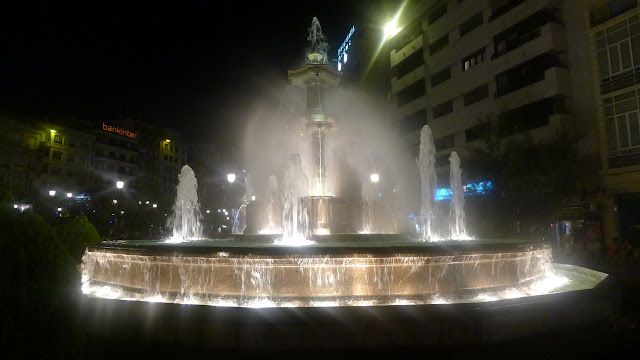 Sure enough, we were soon sat outside in Chikito's charming terraced area. First impressions were very good. The restaurant was situated in a great area to sit and people watch, the Puerta Real area with views of the magnificent ‘Fuente de las Batallas’ fountain. The other thing that was particularly excellent was the cooling mist or water vapour (but definitely not steam, as I had to keep correcting my wife) that was intermittently spritzed over the diners - a fabulous, and particularly welcome, idea! 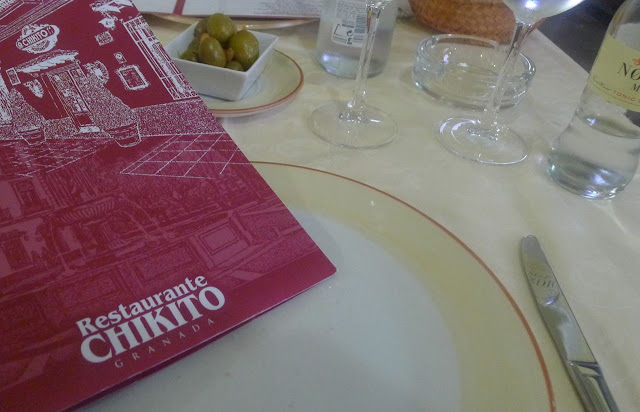 Drinks ordered, we were soon starting to cool as we perused ‘el menú’ and nibbled on some tasty olives. The choice seemed great, featuring many regional and national specialties. I opted for the Tortilla Sacromonte a Nuestro Estilo - an omelette made with lamb's brains and testicles, asparagus, ham and roast peppers. The testicles were not 'nutty' as my wife quipped but more akin to something like chewy pieces of squid, with no real discernible flavour. The brain was firm but spongy with a mild offaly flavour, more like a liver parfait or pate than offal in its 'raw' state.  The omelette itself was gorgeous and light, the egg barely cooked.

My wife went for Foie con Laminas de Manzana al Pedro Ximenez - Foie Gras with wafers of apple and a Pedro Ximenez sauce. Served cold, the foie and apple were sliced thinly and stacked to form a tian, the sweet, rich glossy sauce liberally coating the impressive and flavoursome dish. My wife really enjoyed this, saying that she’d definitely order it again. 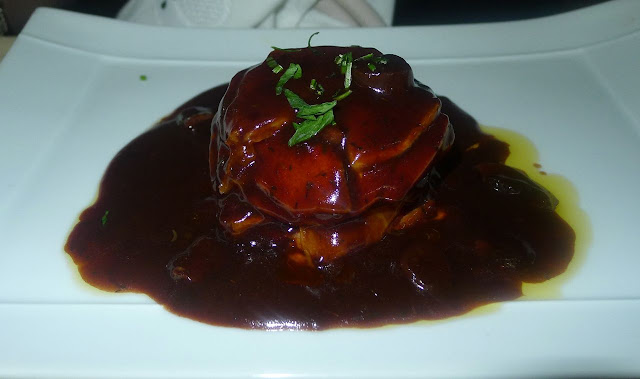 For my main course I choose something that I had not tried before, Lomo de Esturión de Rio Frio a la Parilla  - a chargrilled fillet of Sturgeon locally sourced from Rio Frio, a river and town bearing the same name that lies about five miles from our house in Salinas. This was the first time that I have seen sturgeon on a menu, of course, sturgeons are more famous for their prized roe which is made into caviar. My fillet was cooked rare and had a mild flavour and a texture more reminiscent of veal than fish. 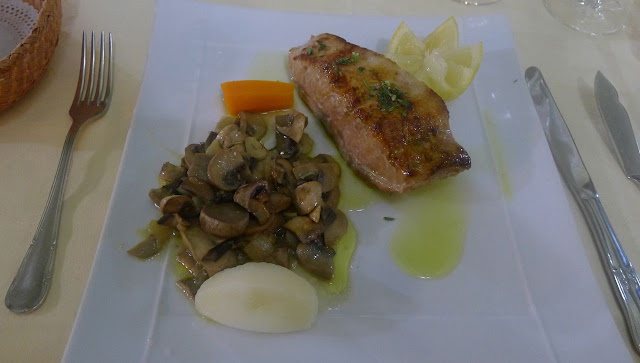 My wife fancied a lighter option for her main and chose, Ensalada Tropical al Gusto del Chef - a tropical salad featuring pineapple, papaya, physalis, pomegranate, melon, carambola, kiwi, strawberry, banana and sweetcorn. All served on a bed of crisp lettuce and sliced beefsteak tomatoes. Very often dishes like this are served straight from the fridge which leaves the fruits too cold, pleasingly on this occasion everything on the plate appeared freshly cut and a toothsome temperature. 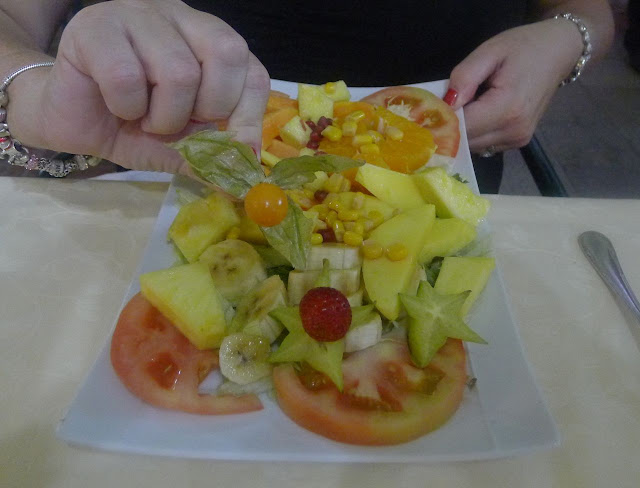 I chose to skip dessert, planning to return to Casa Enrique for some cheese and a digestif. My wife chose a Crème Caramel type dessert - I'm not sure exactly what as my attention at this point was taken by an Italian gentleman at the next table, who was rather loudly and drunkenly reading out the menu to his embarrassed partner and making loud pig noises every time he came across a dish that featured pork. 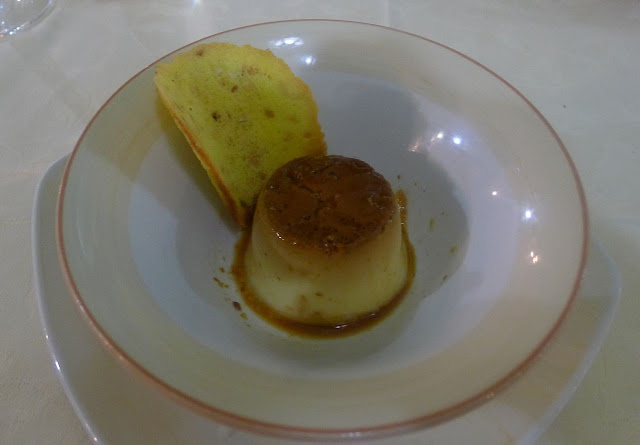 Back at Casa Enrique, black and white photos on the walls spoke of the bars early history, showing how it remains largely unchanged since its opening in 1911; casks of sherry having sat in the same position for the past one hundred years. Colour photos and newspaper clippings tell of the bars more recent history as a celebrity hangout famous for its authentic rustic charms and quality charcuterie. The only change seems to be outside where the horse and carriages of yesteryear have been replaced by bright lights, buses and zooming scooters. 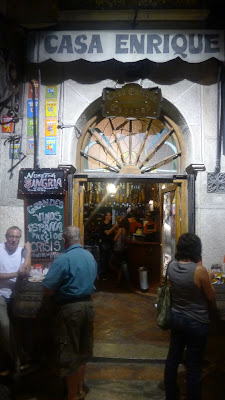 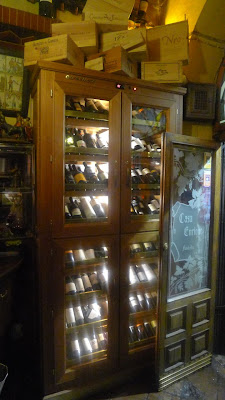 The cheese was nice and a welcome end to my evening's eating. Although, I do usually prefer, when eating Manchego to have at least two different vintages on the plate, this way I find it makes for greater appreciation and enjoyment of their individual nuances. Entirely my fault for not doing so here, as my method of ordering "Queso, por favor." was, on reflection, perhaps not specific enough. 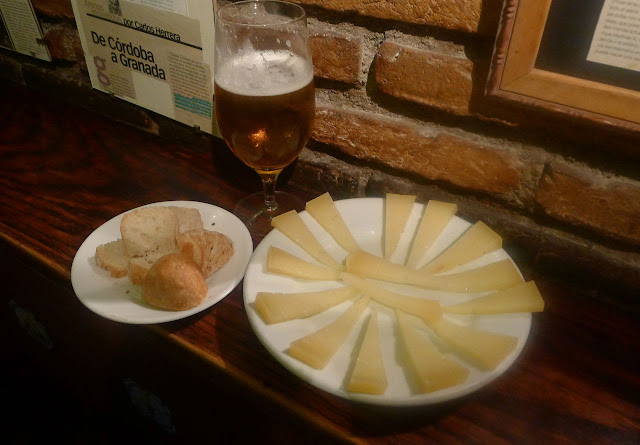 Our first night in Granada an overall success, thanks to the trusty Michelin guide and a bit of local knowledge. We’ll definitely have to return to La Fábula during a month other than August to thank their staff for their recommendation and, of course, to sample their food. 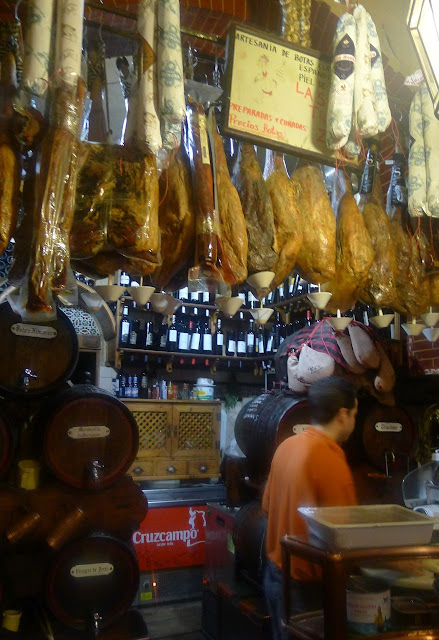 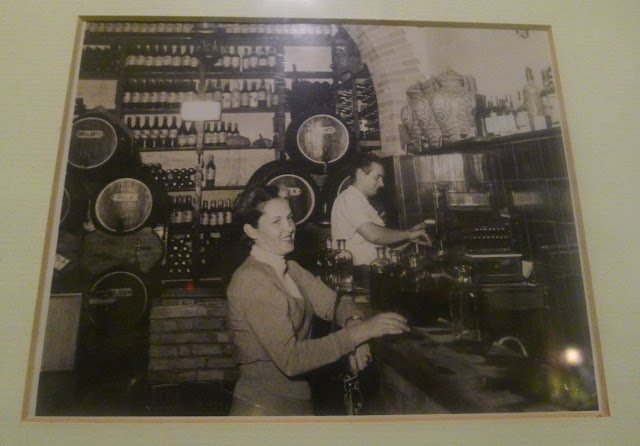