The pizza’s history can be traced as far back as the Ancient Greeks but not until 1889, did the stripy-ice-cream loving Neapolitans create the modern pizza when with a stoke of genius, they decided to add cheese!

Of course, Pizza can vary massively in quality, from frozen microwavable ‘things’ to the gourmet creations of Gabriele Bonci and Simone Padoan. A quick Google search about pizza soon informed me that the food loving people of America eat around 350 slices of pizza each second or 100 acres per day (it didn’t say if this was as a collective or each!) I also discovered that there are approximately 10,000 pizzerias in the UK.

Now, pizza is far from being my favourite food but I can’t fine dine everyday and sometimes a humble pizza pie is a fuss free option for a quick lunch. Consequently, and despite my natural aversion to chain restaurants I do occasionally find myself in a Pizza Express (or more embarrassingly, a Pizza Hut!) So the prospect of a good independent pizzeria in the city centre of Manchester seemed like the perfect solution and one I had to check out. 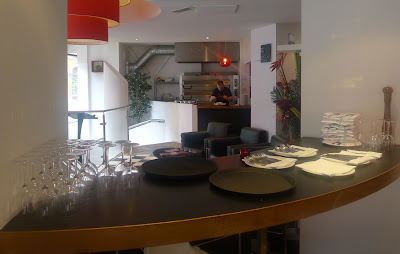 For a while now, I have been hearing good things about Dough Pizza Kitchen. With its location just a stone’s through from Manchester’s Arndale Centre and main shopping thoroughfare, Market Street, it was inevitable that I would eventually get round to giving it a go. Although, I’d like to add that this visit was at my wife’s insistence. I wanted to go to Abode or the 2nd Floor Restaurant at Harvey Nicks, but apparently, we go there ‘too much!’

Dough is a sister restaurant to the trendy bar and cocktail lounge, Apotheca. Both located in the same listed building in Manchester’s arty and, dare I say, farty Northern Quarter. Set over two floors and boasting 140 covers, the venue is modern and family friendly. (Although I did find the acoustics to be a little dodgy; to me, it sounded like I was eating my lunch in a swimming pool.) 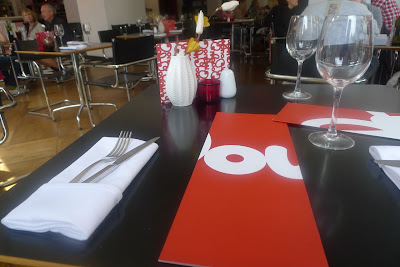 On a more positive note, they have a decent drinks menu, good service and linen napkins. The choice of pizzas is pretty exhaustive from classics to the more experimental. They also offer a range of salads and pasta dishes from the oven. The dough for the pizza bases is made on site and diners can choose from traditional, wholemeal and gluten-free.

To start we shared, Dough to dip – eight dough sticks with hummus, sweet chilli sauce, pesto, oil & balsamic vinegar and garlic butter. The dish was well presented with fresh, hot batons of dough. The pesto was made in house and very tasty. There could have been a little more vinegar in with the oil but overall a good dish to start and share.

For my main, I opted for the interesting sounding pizza: Asian Mackerel – Smoked mackerel, roasted cashew nuts, green peppers, red onions, mozzarella, our tomato sauce and topped with coriander and horseradish crème fraiche. Just to be different, I thought I’d go for the wholemeal base; after all, I do generally prefer wholemeal bread. On this occasion it proved to be a mistake, the base tasted too much of dough: floury and claggy. The toppings were tasty and worked for me, despite being a little different from those on a traditional pizza.

My wife went for, Duck & Brie – Roasted duck with pear, brie, mozzarella, thyme and pickled red cabbage. Choosing the standard base was a wise move. The toppings worked well as a combination and also with the base. I think the thing to consider when choosing a pizza such as this or the Paella Pizza (below) is, just because the toppings sound good, will they also complement the bread, tomato and cheese of the pizza itself?

Earlier, I had a little dig at the Northern Quarter calling it ‘arty’ and ‘farty’, but on reflection this is a tad unfair and was perhaps just my pretentious punt at a witty pun. There are, in fact, some great eateries, cafes and bars there. The pick of the bunch being such places as Sweet Mandarin, Teacup and Cakes and Socio Rehab; and a whole load of others that I have yet to try.

But, back to Dough? Yes for pizza loving families, groups or for people wanting a change from everything else that is currently on offer in the city centre. But for me… No, not by choice (unless I was in a group and they all wanted to go) there are too many other preferable options to return to, or check out. Northern Quarter = Yes. Dough = No.