“Cuisine: Inventive - Comments: Charming restaurant with a wooden ceiling and views of the cloister.”

So says what could be the most understated entry the Michelin guide has to offer. From these comments I was expecting a small bistro style restaurant serving up classic Spanish dishes with, perhaps, a slight modern or inventive twist. I took 'charming' to mean small and quaint. I took 'wooden ceiling' to mean simple and rustic. I took 'views of the cloister' to mean a terrace over looking your average cloister (if there is such as thing as an average cloister.) The truth is, not knowing quite what to expect, what met us certainly exceeded whatever expectations we may have had. 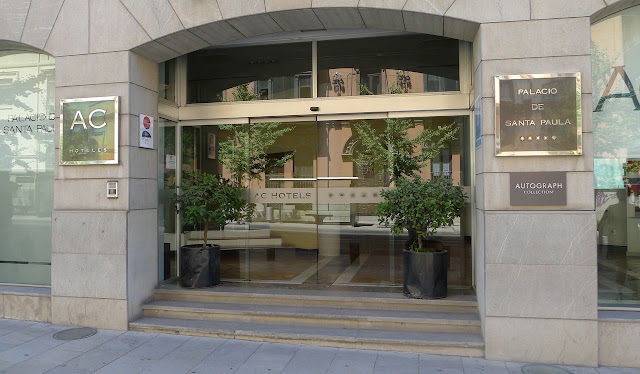 In reality, 'charming' became a plush hotel restaurant housed in one of Granada's finest 5 star hotels, The AC Palacio de Santa Paula. The building’s history including its origins, in the 14th century, as a Casa Moriscos and, in the 16th century, as the Santa Paula Convent. 'Wooden ceiling' turned out to be the ornately carved, magnificent ceiling to the lofty space that was once home to the convent's library and reading room. 'Views of the cloister' turned out to be a beautiful setting, overlooking a grand cobblestoned courtyard, complete with fountain and surrounded by immense Corinthian pillars and arches. All overlooked by the imposing gothic tower of this wonderful Mudéjar architecture. 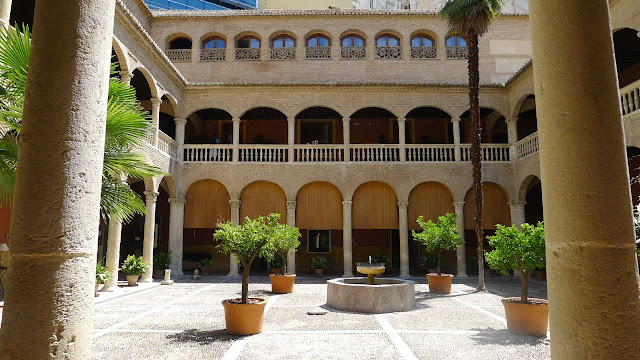 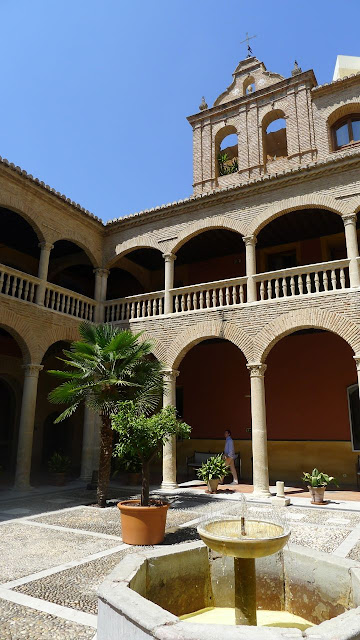 At the entrance to the dining room, we were pleasantly surprised to be met by a large poster depicting the proud executive chef / proprietor Juan Andrés Rodríguez Morilla holding an award proclaiming him 2009 Mejor Cocinero de España (the 2009 Best Spanish Chef). Inside, more awards and accolades decorated the space. The Seville born chef who opened this restaurant in 2000 has quite a pedigree. He was the first Andalusian chef to win 'National Cook of the Year', a title he has now held an unprecedented twelve times. He has also worked in the two-starred La Alqueria Restaurante in the elBulli Hotel Hacienda Benazuz and the one starred Drolma Restaurante at the Hotel Majestic in Barcelona and El Cenador de Salvador in Madrid. 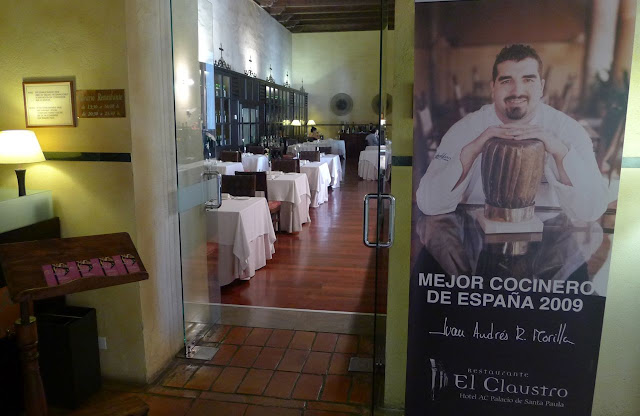 Upon being seated we were handed English copies of the restaurant's A La Carte and Set Menus: The five course Classic (€60), The seven course Sensations (€75) and the nine course Gastronomic (€100). We opted for the Sensations Menu, mainly because it featured a cold almond soup, a dish that I have recently made myself and had at the Michelin starred Fraiche in Birkenhead and wanted to compare. We also liked the sound of the scallops carpaccio. 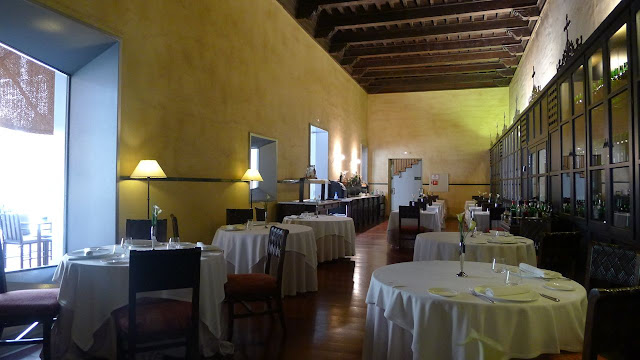 The dining room impressed with crisp linen tablecloths, napkins, fine tableware, quality cutlery and soft romantic lighting. Typically Spanish, the décor was sumptuous rather than rustic. The ambience lifted by soothing classical music complementing this once spiritual setting. The large former bookshelves, adorned with the cross, that extended down one side of the restaurant, reminds diners of the room’s former purpose and now houses some of the restaurant's collection of fine wines (I'm not sure how much the sisters would have approved). 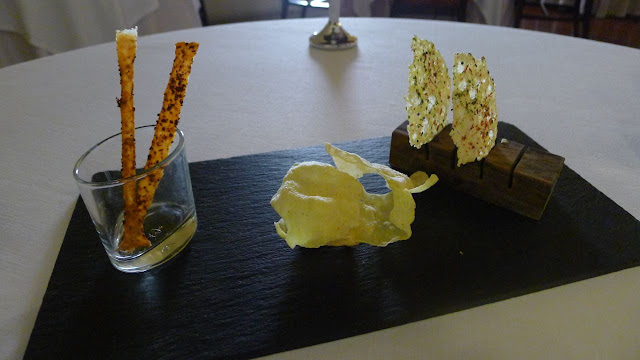 First to arrive was an amuse bouche featuring a trio of  treats: an oriental spiced flatbread; a light poppadum style wafer, with delicate curry spices and a pizza inspired Manchego wafer. We were soon offered a selection of breads. Over the course of the meal I managed to sample one of each: an olive oil bread; a cheese, a brown; a white and a tomato flavoured bread. The cheese one was my favourite but the real stars were the accompanying toasted Maldon salt and the chef's own locally produced olive oil made with Picual olives. 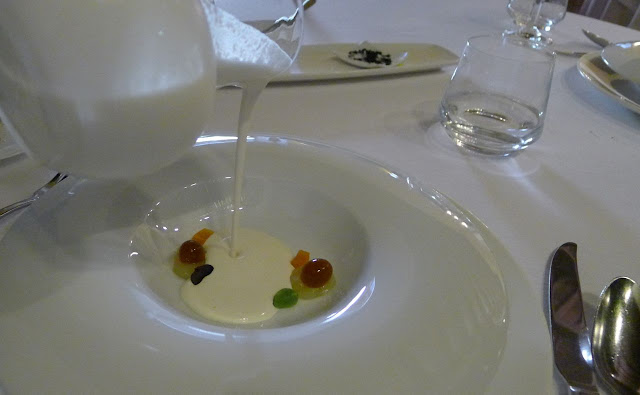 "Ajo Blanco"  (Typical Almonds and Garlic Cold Soup) with Apple and Dry Apricots - the chilled soup was a refreshing start to the meal. The pureed apple and cube of dried apricot provided a smack of sweetness. The surprise elements in this dish were two spherifications of Pedro Ximénez sherry, which delightfully burst on the tongue imparting a further rush of fruity sweetness. 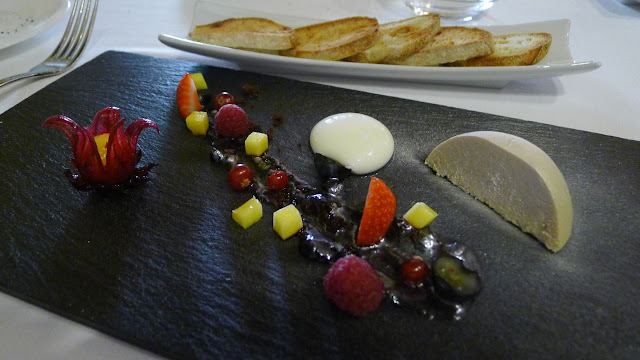 Foie with Red Fruits Jam – served on a black slate this next course was a visual work of art. The sweet sticky jam was studded with fresh red berries and contrasting cubes of yellow mango (the colours of the Spanish flag). Another use of spherification, this time enclosing some fresh natural yoghurt. The generous serving of foie gras, as if not indulgent enough, had been sprayed a glittery gold colour. 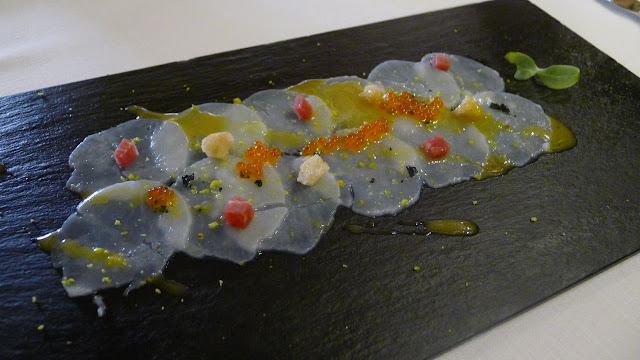 Scallops Carpaccio with Trout Caviar - this was my wife's favourite dish, the translucent paper-thin slices of scallop looked like tiny jellyfish floating in the depths of the black serving slate. The salt and vinegar seasoning came from cubes of ibérico ham and in popping bursts from the trout caviar, locally sourced from Rio Frio and a subtly acidic vinegary gelée. 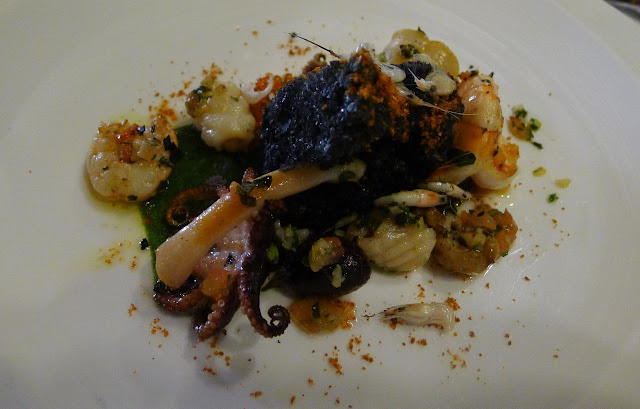 Sautéed Seafood from the Andalusian Coast - this dish delivered in both its imaginative concept and impeccable flavour. The ‘seaweed’ seabed was made from a thin layer of jelly (I'm struggling to make this sound as appetising as it was, suffices to say this vivid green sheet of molecular gastronomy was perfectly good.) Upon the seabed sat a 'rock' formed from butter and squid ink, so light and buttery, it melted with the slightest breath or touch, coating everything in a rich glossy sauce. Around the rock, swam a celebration of local seafood - exquisite, tiny shrimp, meaty prawns, lightly sautéed squid and a plump baby octopus. A joyful dish. 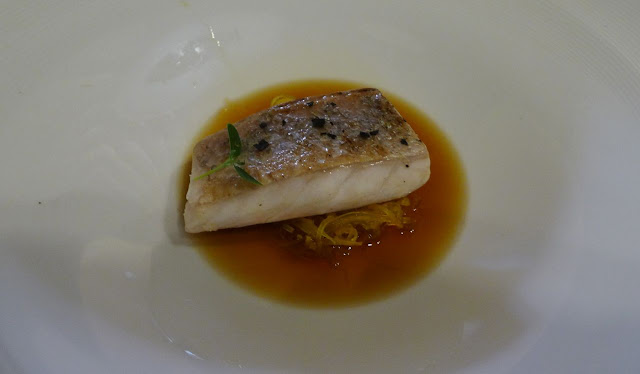 Sea Bass with Squash Vermicelli and Smoked Tuna Consommé - although, perhaps the simplest, this was my favourite dish. The bass itself was as delicate and fresh as any I’ve tasted. I said simple, didn't I? I may have temporarily over looked the 'squash noodle', don't quote me on this one but I think they are made with some kind of methylcellulose and a gelling agent such as agar agar or gelatine - all a bit technical. The real punch of flavour in this dish came in the form of the fabulously clear, umami rich smoked tuna consommé. (The flavour memory is flooding back to me as I write.) Quite sublime. 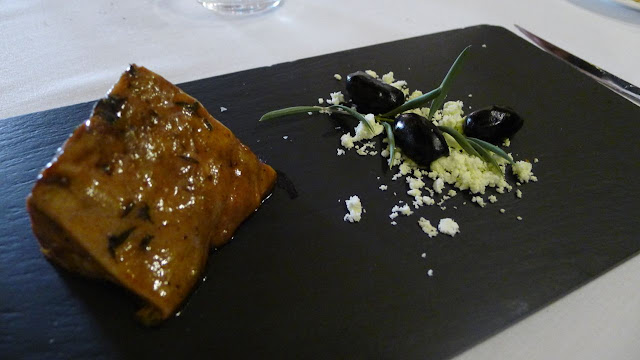 Lamb with Alpujarran Goat Cheese "Olives" - this dish had a tough few acts to follow and perhaps should have been the star; it certainly looked the part. The lamb had been sous vide for no less than twenty-four hours and although obviously meltingly tender was not as flavoursome as one might have expected. The goats cheese 'olives' employed techniques similar to the specification to create a soft black 'olive skin' that encased the goats cheese and the surprise 'pit' of a sherry soaked raisin. These, along with an olive sprig garnish, were placed upon dehydrated olive oil that represented the local specialty 'migas' - a visually impressive dish and great concept that sadly lacked a little in flavour. 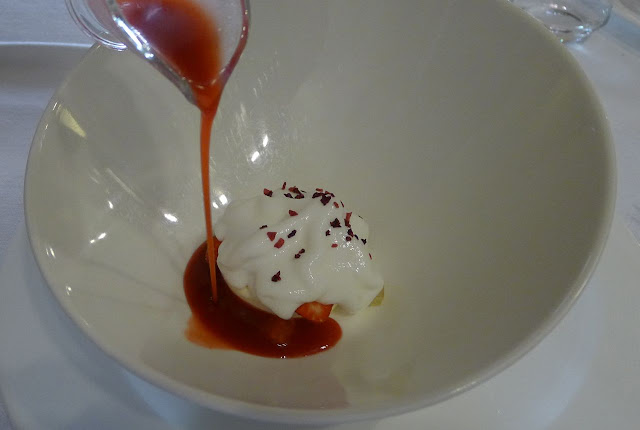 Strawberry and Vanilla Soup - bearing in mind the creativity of some of the previous courses, this dessert could easily have been seen as an anticlimax. Relatively, simple as it was, the refreshing 'soup' was a fitting end to the meal.

We decided against coffee, planning to walk along to a local bar that overlooks the cathedral. We were however, presented with a coffee flavoured 'ice-cream' and some delightful petit fours - the dark chocolate with pink peppercorns, being my favourite. 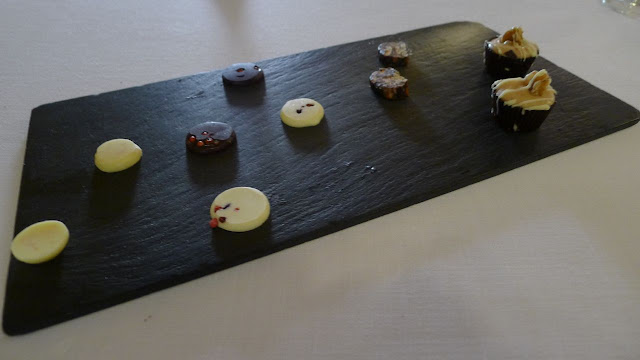 I think what made this meal particularly enjoyable was a matter of expectation. We went to El Claustro expecting that 'Charming restaurant with a wooden ceiling and views of the cloister' and were treated to a meal that was as awe-inspiring as the historic venue itself. For us, without doubt, the best place we have eaten in Granada.