I hate having to cancel a restaurant reservation, as I know that for small independent restaurants especially, frequent no shows and cancellations can be ruinous.

We had booked an overnight trip to London to meet up with my stepson who was visiting briefly from Singapore. For this night we booked the Town Hall Hotel and Apartment and a meal at The Typing Room (post to follow).

With a last minute change of plans, an extra night in London meant we had to find another night’s accommodation and somewhere to eat… my first thought was Lyle’s and their online reservation system had one time slot left, 9:45pm. This seemed a little late to eat but I loved Lyle’s when we visited last time (see here).

I won’t bore you with all the details but after my lunch in Leeds (at The Man Behind The Curtain) I had expected to be back in Manchester by 3 and in London by seven. When at 4pm I was at a standstill on the Motorway leaving Leeds, I called Lyle’s and explained to the lady who answered the phone that I was stuck un traffic “oop North” and would need a minor miracle to make it down in time, so it was best if I cancelled … “Booo!”

Instead of ‘accepting’ the cancellation, they were really cool about it and said that if I managed to get down before they closed to call in for a drink and they’d sort at least something to eat… a minor miracle and an unusually clear run for a Friday evening, we finally made it to Shoreditch after ten. 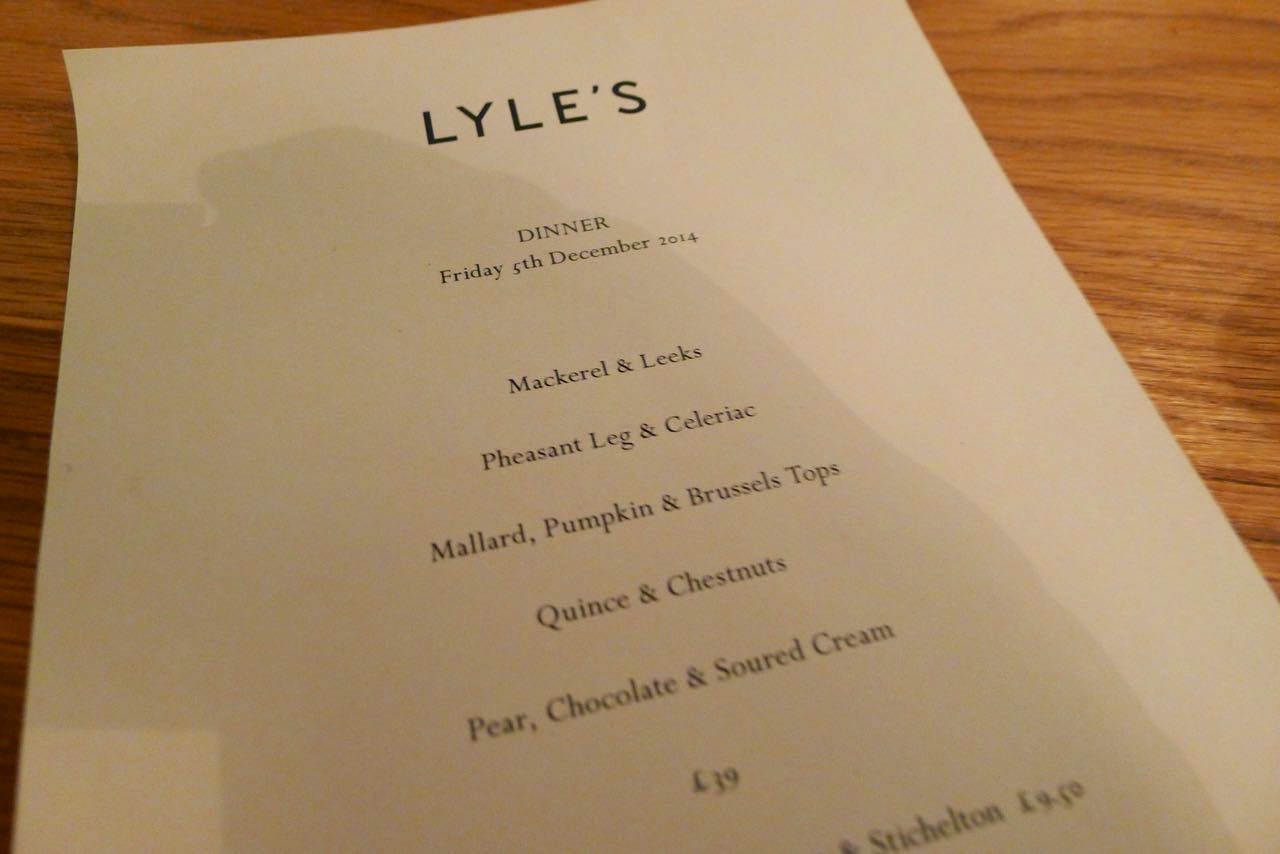 Parking up, I arrived at Lyle’s a little flustered but was greeted with the news that not only would I be able to get ‘something’ to eat, the full menu was still an option!

At just £39 for five creative courses of conscientiously sourced ingredients, Lyle’s offers exceptional value for the capital. Chef James Lowe has an almost unparalleled ability to extract so much flavour from every morsel that leaves his kitchen. 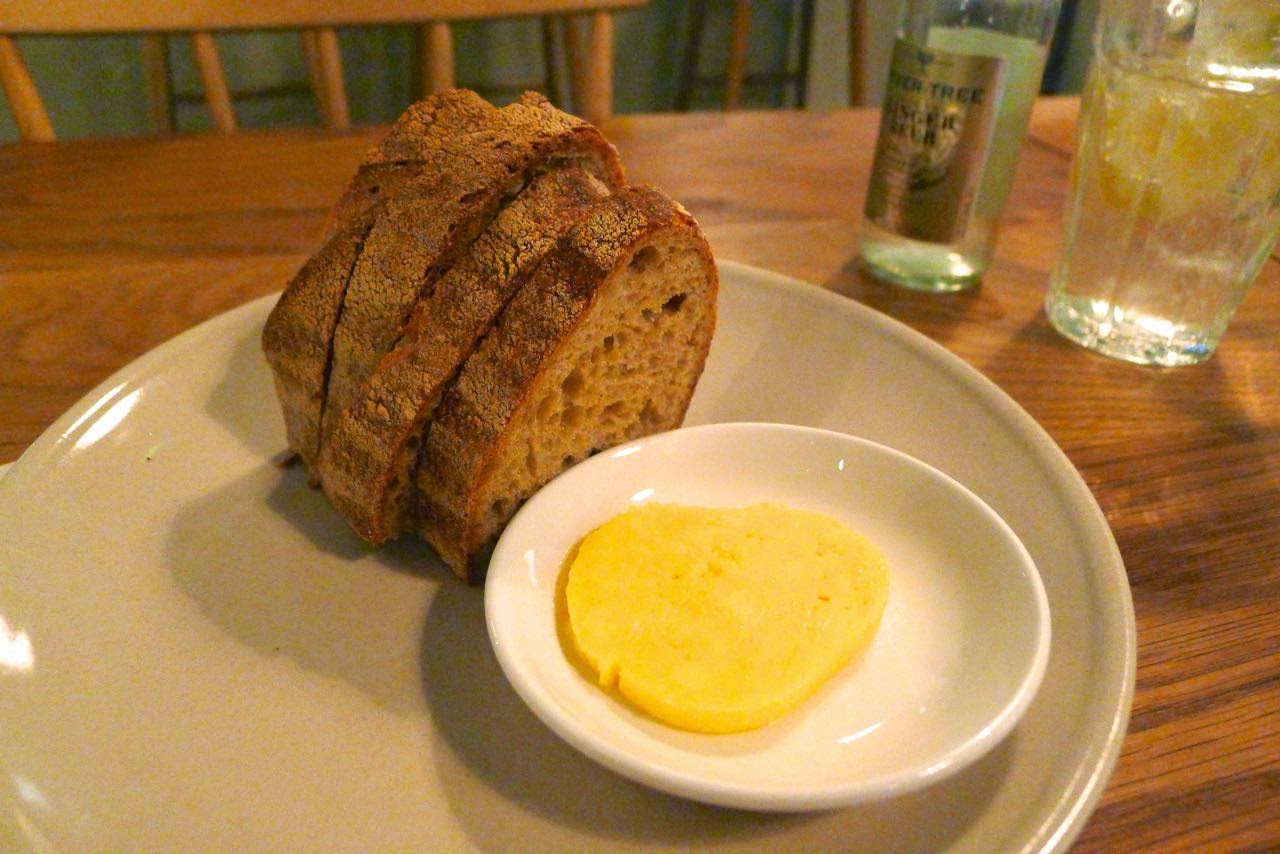 When I last visited to Lyle’s they were buying bread in but James is now happy with his Sourdough recipe… I was too! 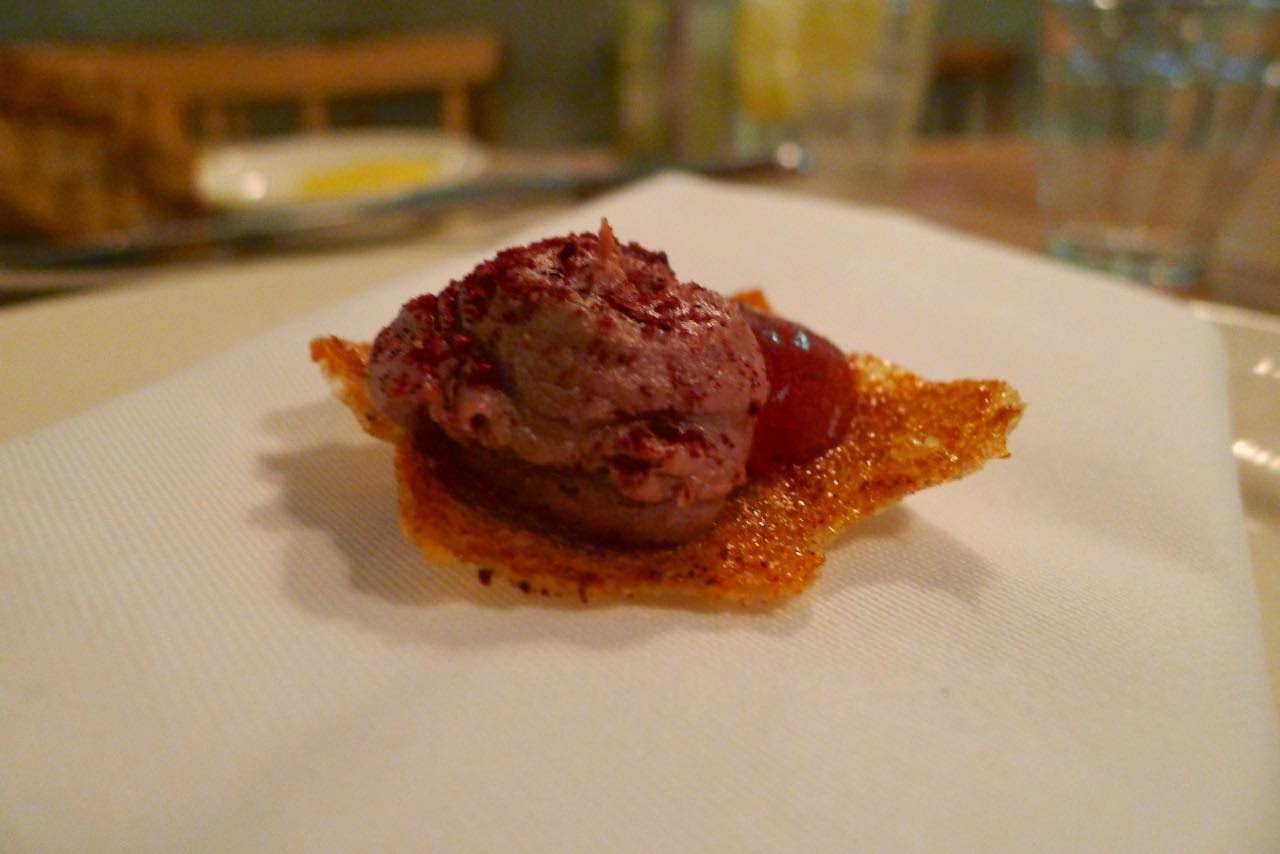 I was even happier when the canapé of Game Liver Parfait with Crab Apple Jelly arrived… crab apples are a readily available yet woefully underused British ingredient; they pair especially well with game. Simon Rogan often makes good use of crab apples. 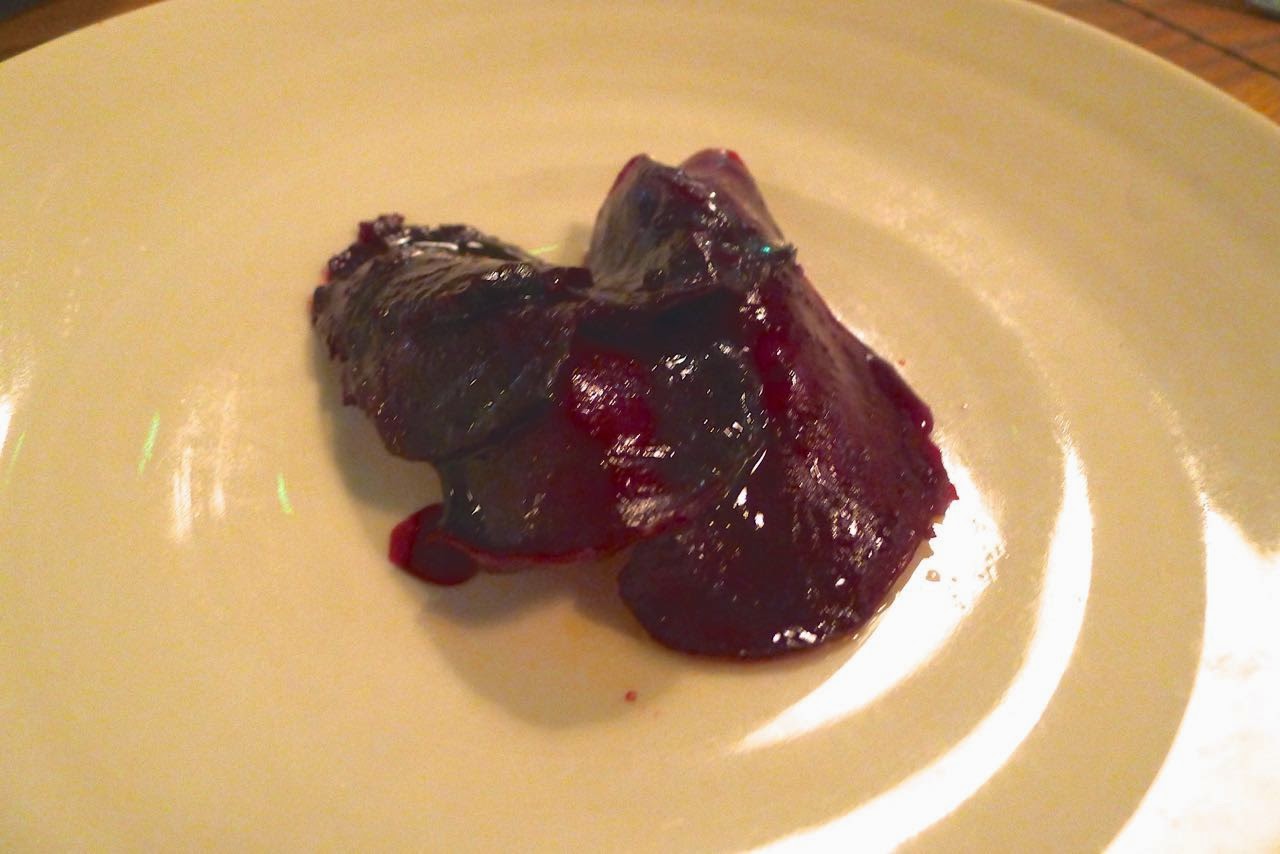 The next dish, Eel & Beetroot, featured one of my favourite ingredients in smoked eel. This was served with a horseradish cream and thin slivers of beetroot; a classic flavour combination. 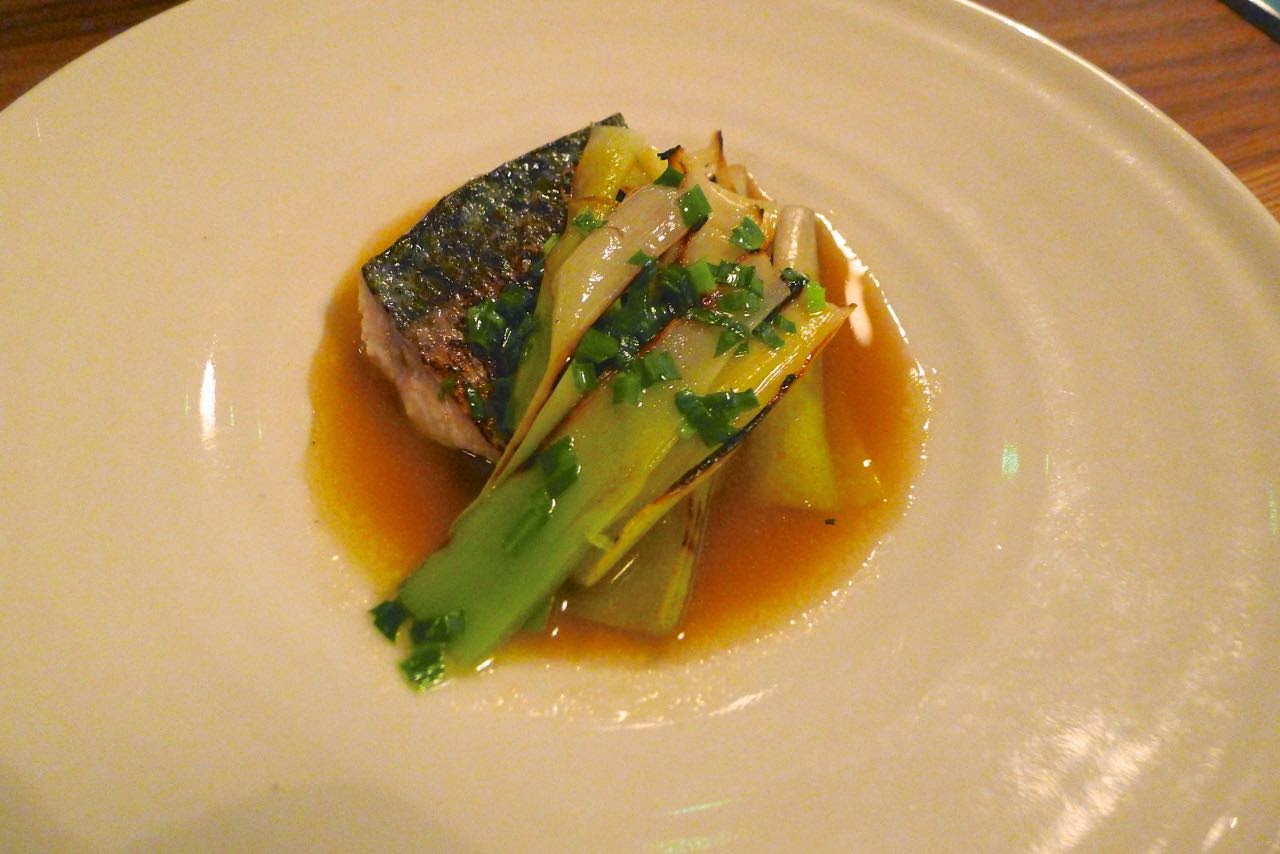 No messing, the Mackerel & Leeks dish that came next is a contender for my dish of the year. The intensity of flavours and sensory overload ramped up further with the heady scent of wild garlic… nothing short of sublime. 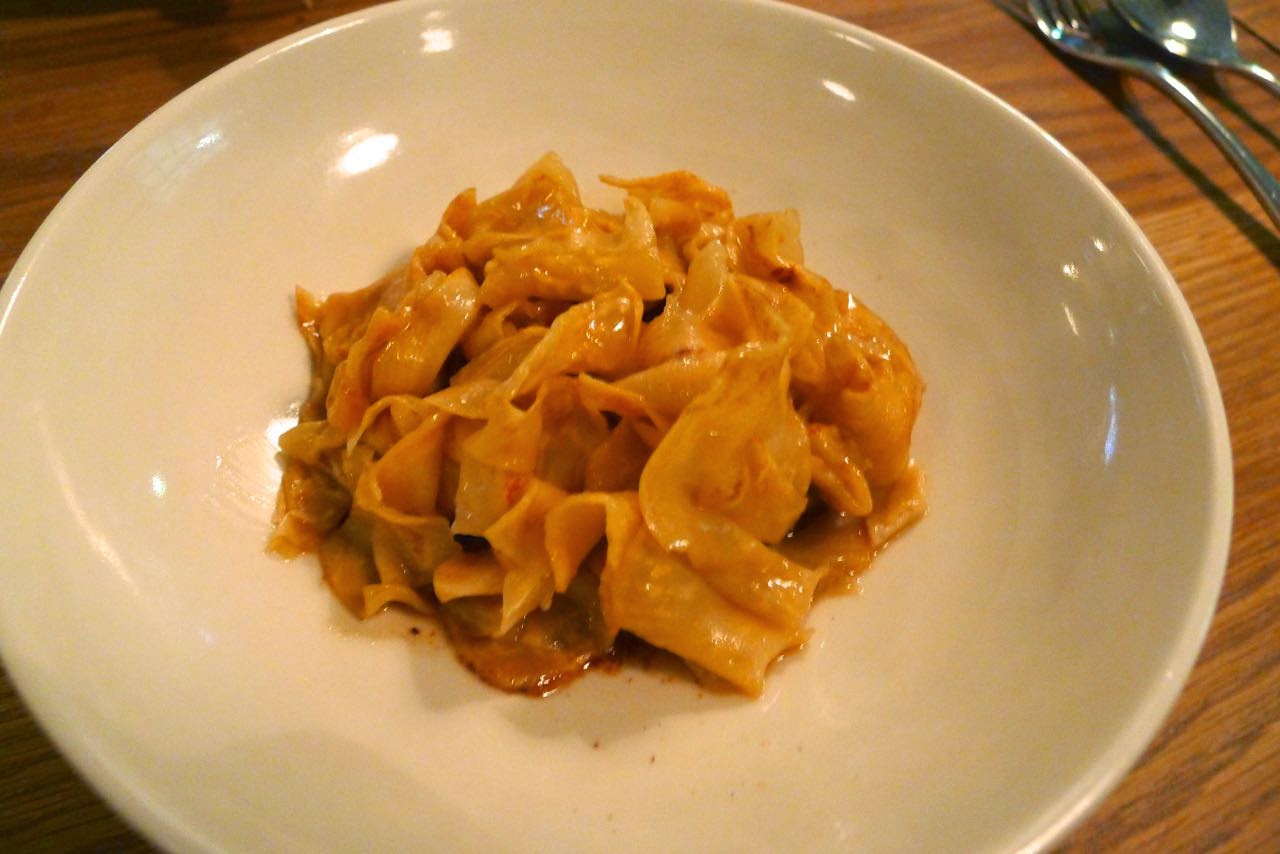 Whatever dish had the job of following the mackerel was going to have to be a blinder too… it was! Flavoured with anise the Pheasant & Celeriac featured braised pheasant leg with dehydrated (& rehydrated) celeriac. 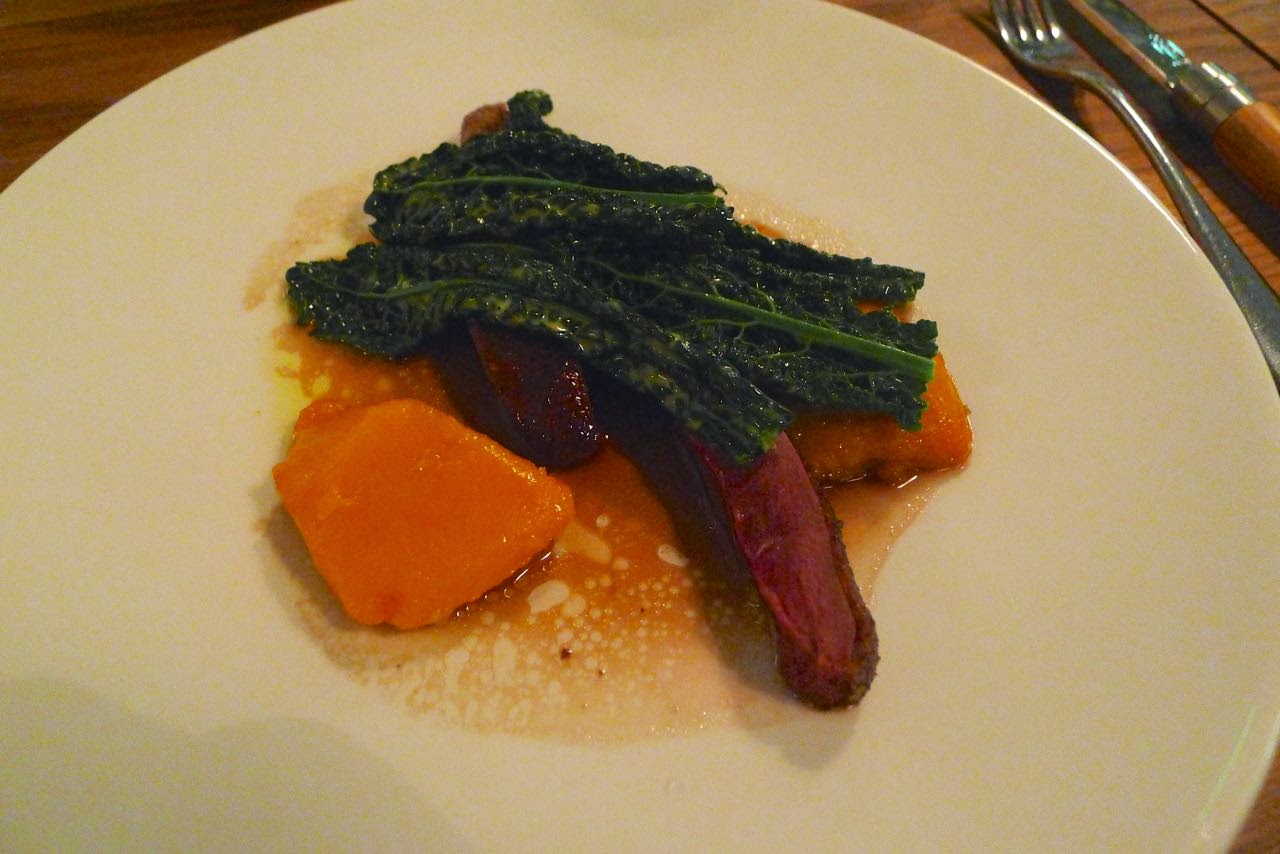 Hung for a week, the duck, squash and brassica combination of Mallard, Pumpkin & Brussels Tops was a delightfully simple wintery dish… you can’t mess with produce this good. 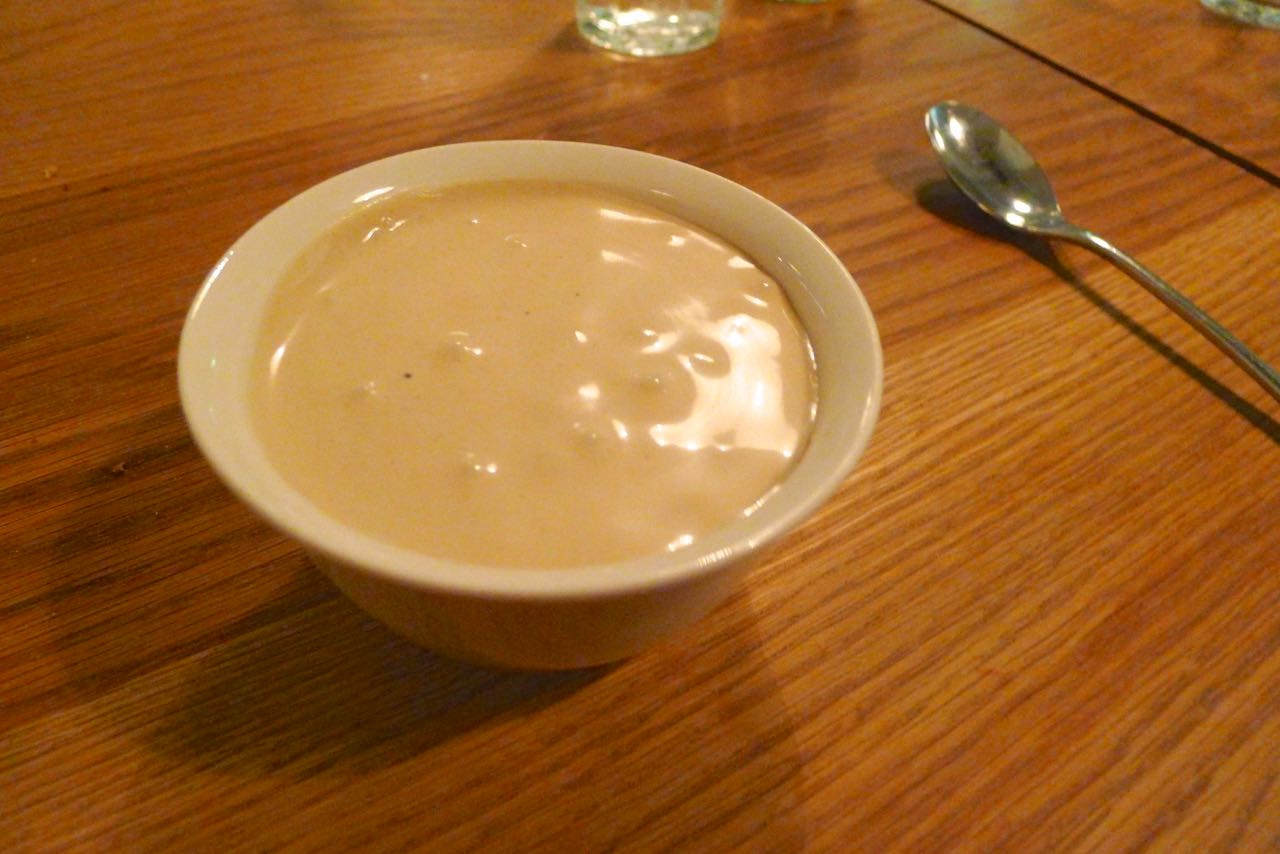 Described by the affable front of house supremo John Ogier as ‘chestnut custard,’ the Quince & Chestnuts dish was topped with what was more like a chestnut yoghurt to me; whatever it was, tasted great along with a dice of poached quince and crisp shards of candied chestnut. 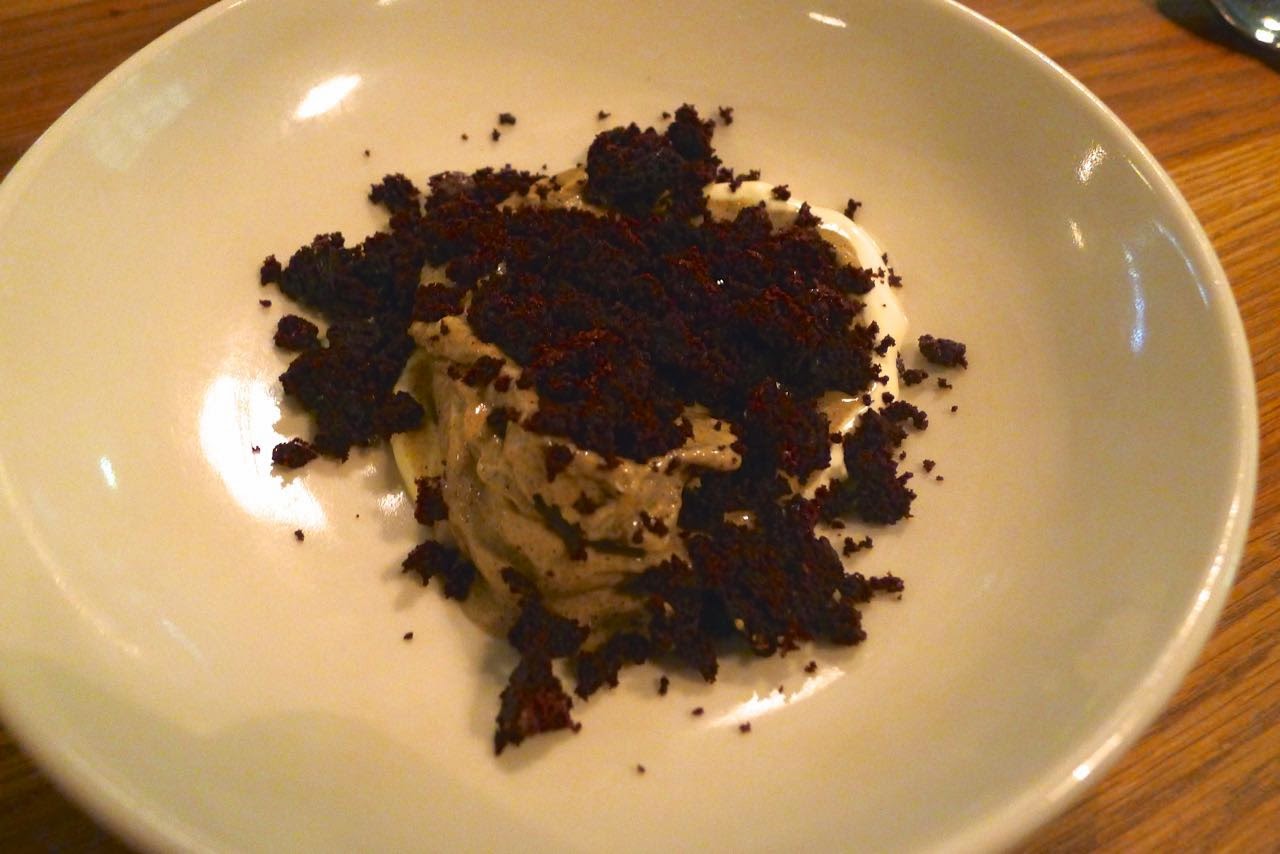 To finish, the fantastic combination of a festive poached pear sorbet with a rich chocolate crumble, Pear, Chocolate & Soured Cream.

I love Lyle’s… next time I’m going to plan better… I don’t want to risk *almost* having to cancel!

Apologies for the pants photos, I’m going to go at lunchtime next when the light is good and get some decent ones.