The Man Behind The Curtain, Leeds

“Somewhere over the Pennines, way up high (above Flannels)
There's a restaurant I heard of, once in a lullaby
Somewhere over in Leeds, there’s a menu
Where the dreams that you dare to dream, really do come true.”

Named as obvious nod to the Great and Powerful Oz character in The Wizard of Oz, the The Man Behind The Curtain is a flamboyant, magical restaurant that you won’t have to be a “friend of Dorothy” to enjoy. 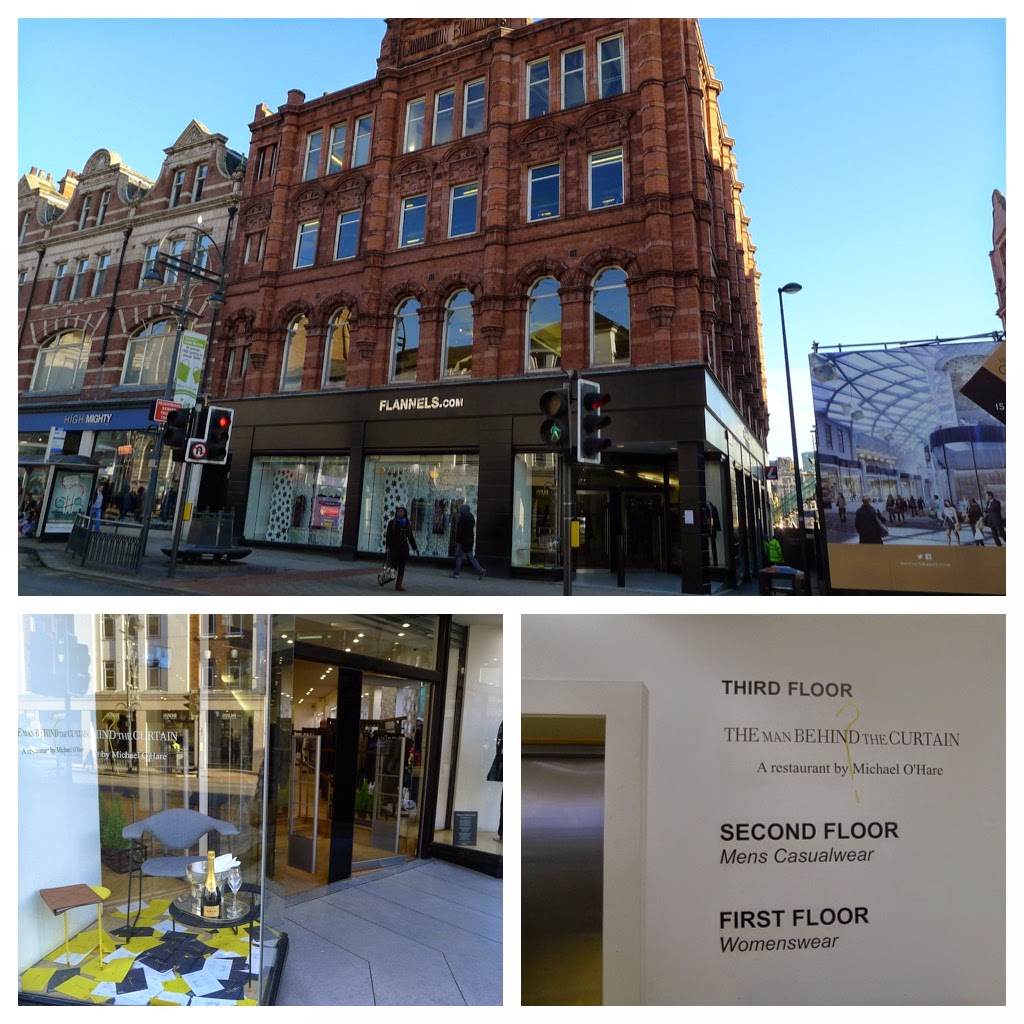 There’s no yellow brick road, munchkins or flying monkeys (that I saw) but the food I ate showed proprietor Michael O’Hare to be a chef with ‘heart’, ‘courage’ and, most importantly, a ‘brain’.

All chefs talk about how they cook with ”passion” and from their “heart” (which do become redundant unless they are also cooking with seasoning and control). A quick post meal chat with Michael O’Hare proved that he is no different. He also talked to me about wanting to “switch a younger generation onto fine dining” this was after I had jotted in my notes how, to me, TMBTC was “fine dining for the MTV generation”… the venue and menu is a fast paced, bombastic, musical, colourful attack on the senses. 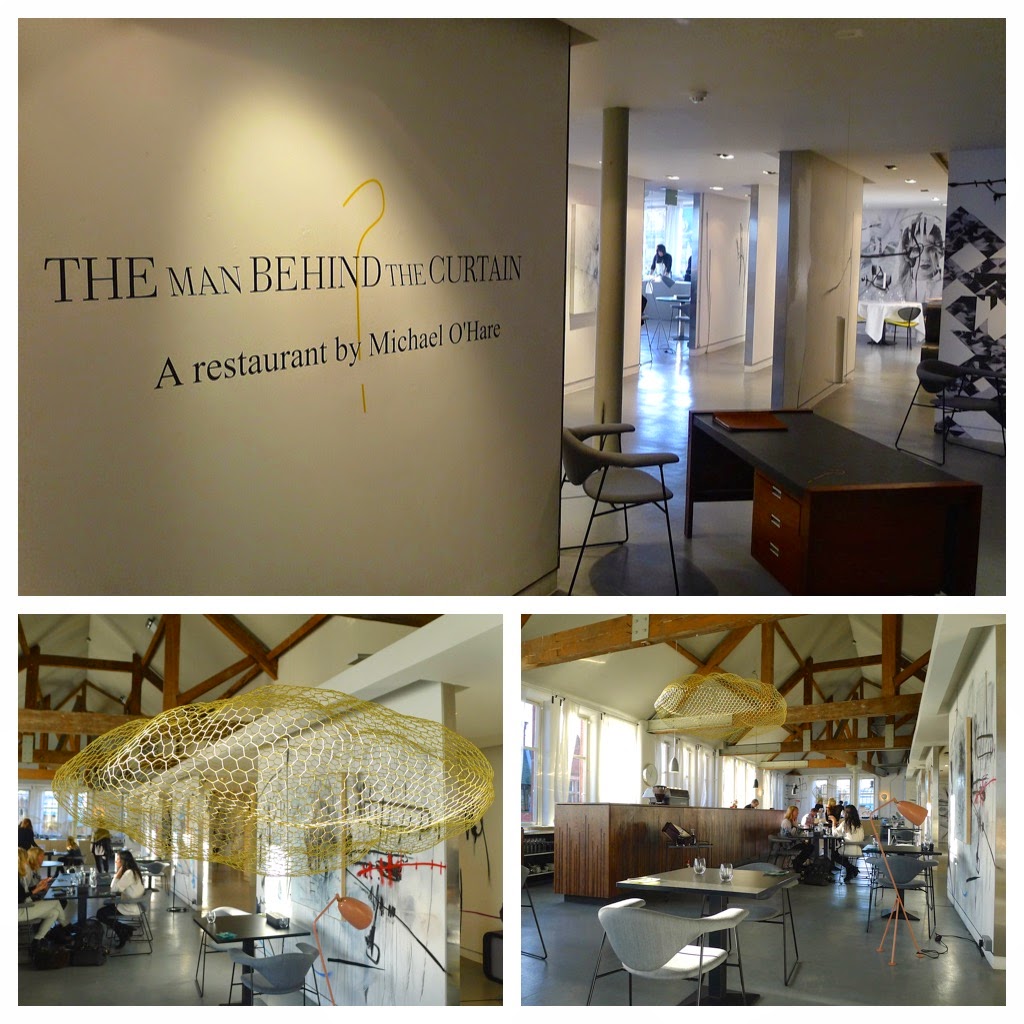 To move his progressive food from the relatively small Blind Swine in York to a 3000 square foot former art gallery (and the formal Anthony’s at Flannels) is courageous in itself; to then decorate the with graffiti style artworks, the visually charged space becomes further proof of O’Hare’s courage.

Although unfounded, the having a ‘brain’ was the part I was concerned about before visiting… all too often I have eaten disappointing meals by deluded chefs who think that by owning a copy of Modernist Cuisine, investing in some kitchen gadgetry and teaching themselves some new tricks combined with ad hoc flavour combinations they will become the next Heston on René Redzepi.

O’Hare trained under Redzepi at Noma but also learnt his craft with the likes of John Burton Race. Fortunately (in most cases) and despite appearance of the food (and himself), the cooking showed enough restraint. If anything, some of the flavours could be a little bolder to compete with the vibrant presentations. 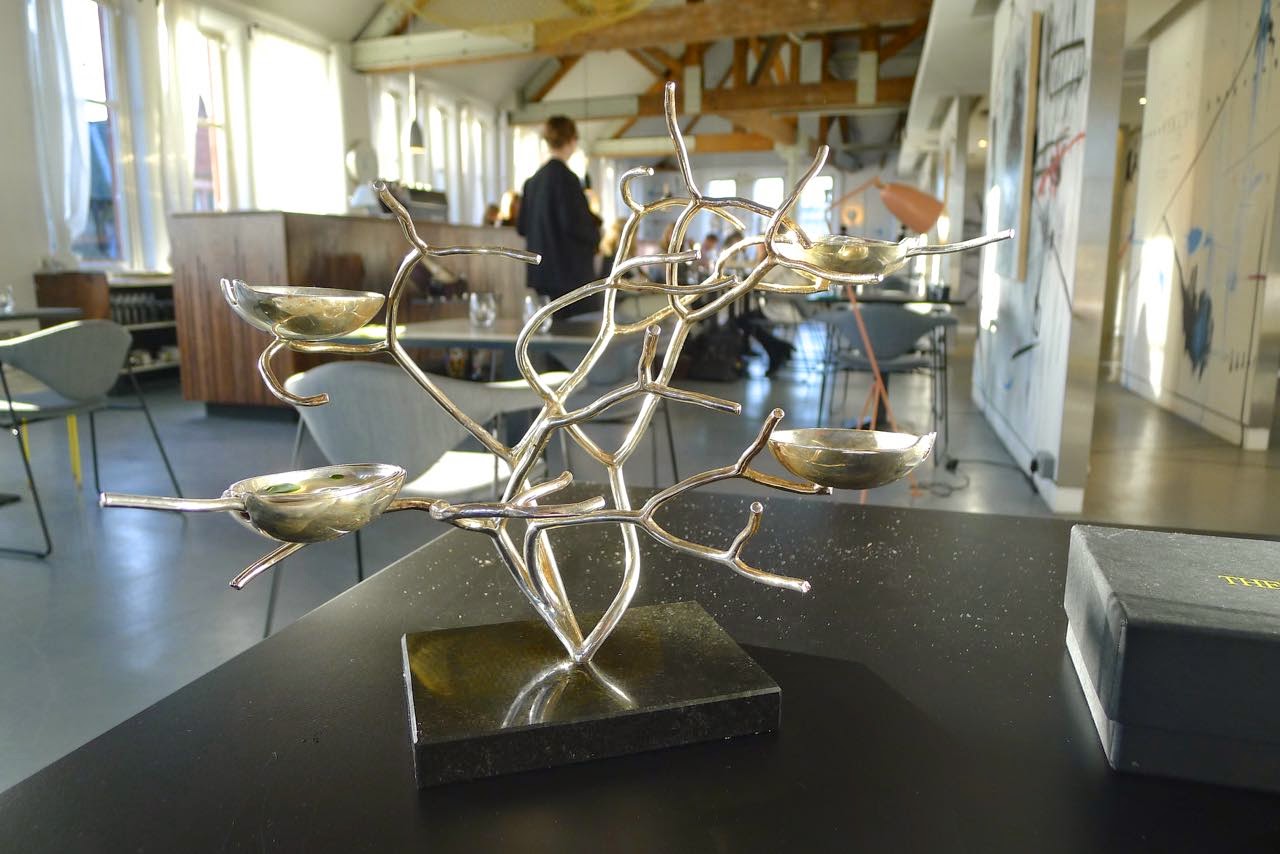 Although as a paying customer and not invited by the restaurant or PR company, they did know I would be joining them for lunch. As such, I was offered the opportunity to dine “Omakse’ style (Chef’s choice), order the Tasting menu or the 3 or 5 course lunches. Naturally, I decided to allow Chef to exercise creative freedom and ended up with dishes from both menus and well as some off the cuff riffs. 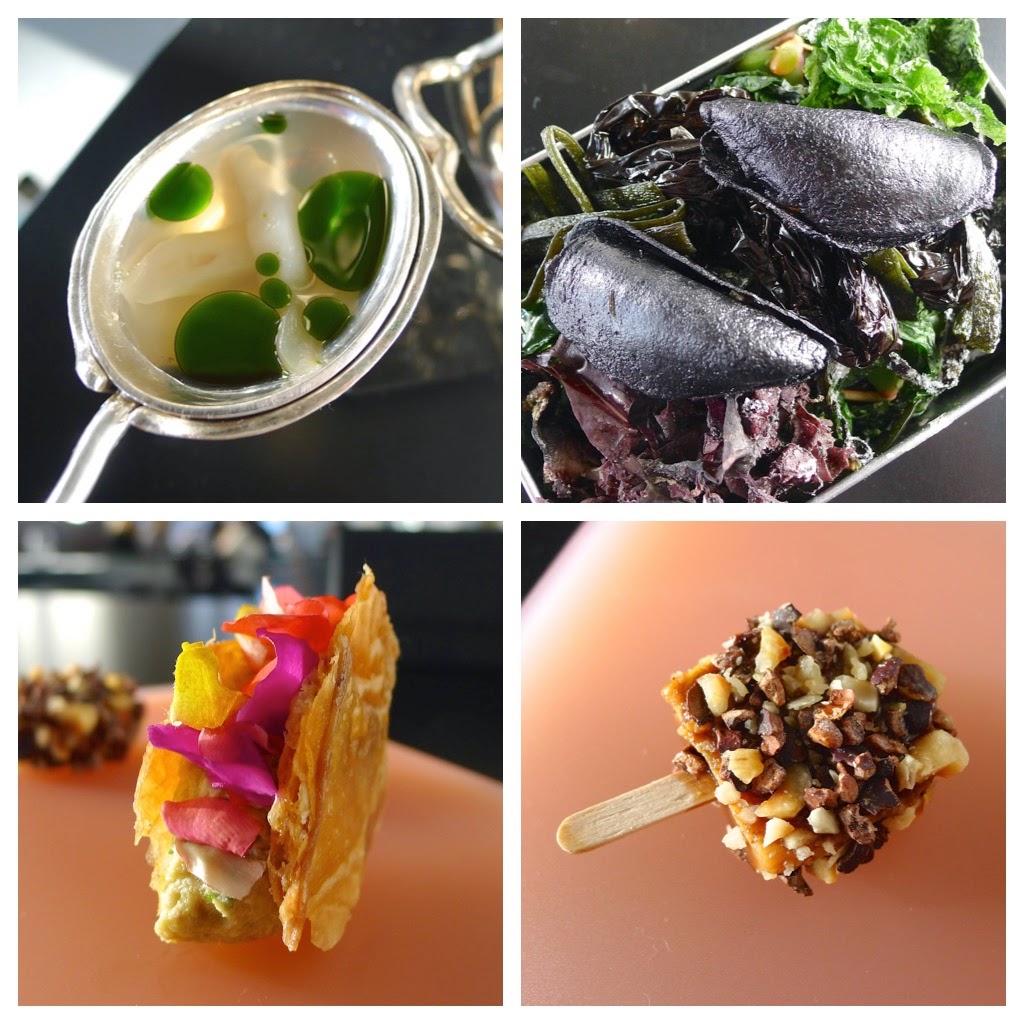 The meal started with a series of snacks – Raw Razor Clam in a mussel consommé with dill oil, which was a delightfully subtle dish; a Squid Ink Mussel, which was crisp and had a lovely smack of salt; a Chicken Skin Wafer with a Thai chicken pate and petals and a Foie Gras Magnum, which was the only disappointment due to it’s gluey texture and nuts which had lost their bite. 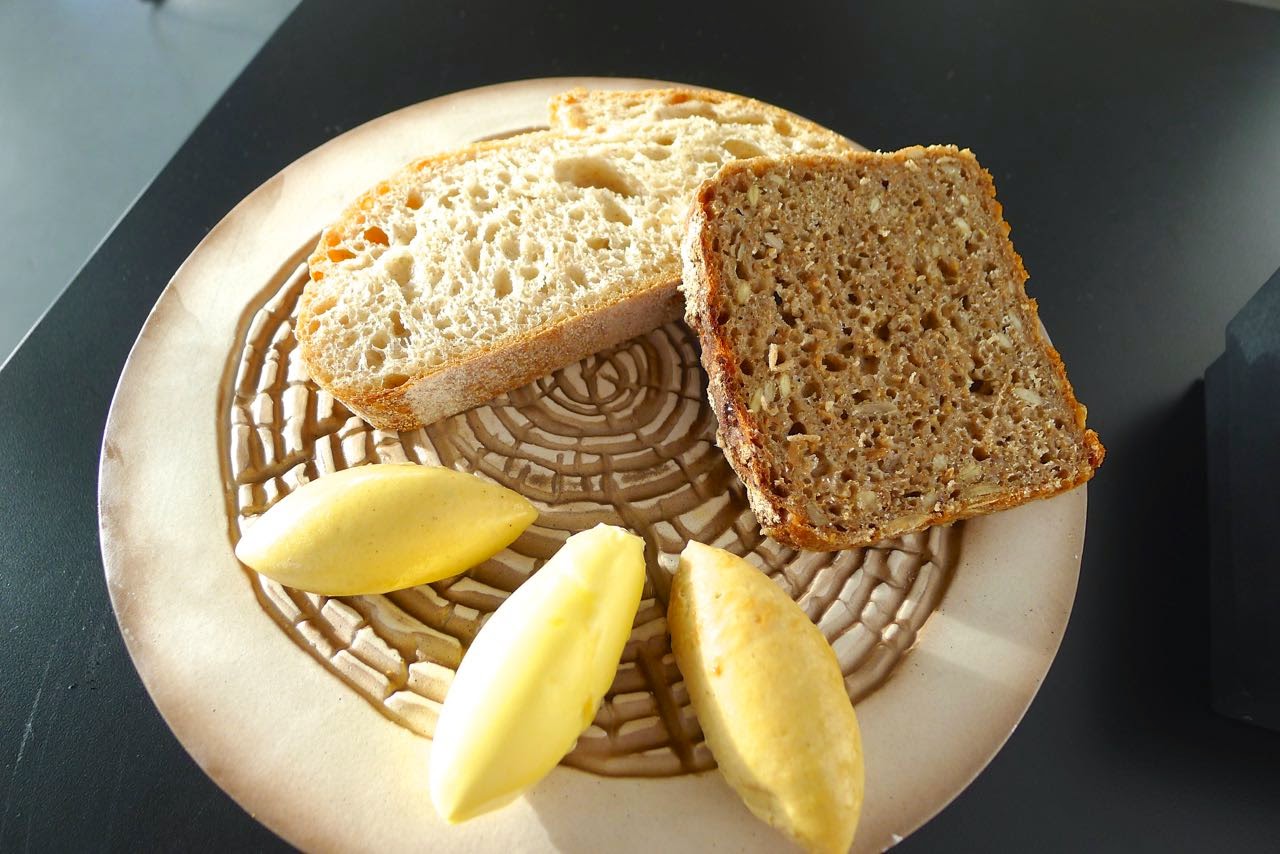 The Rye and Sourdough breads with butter selection. 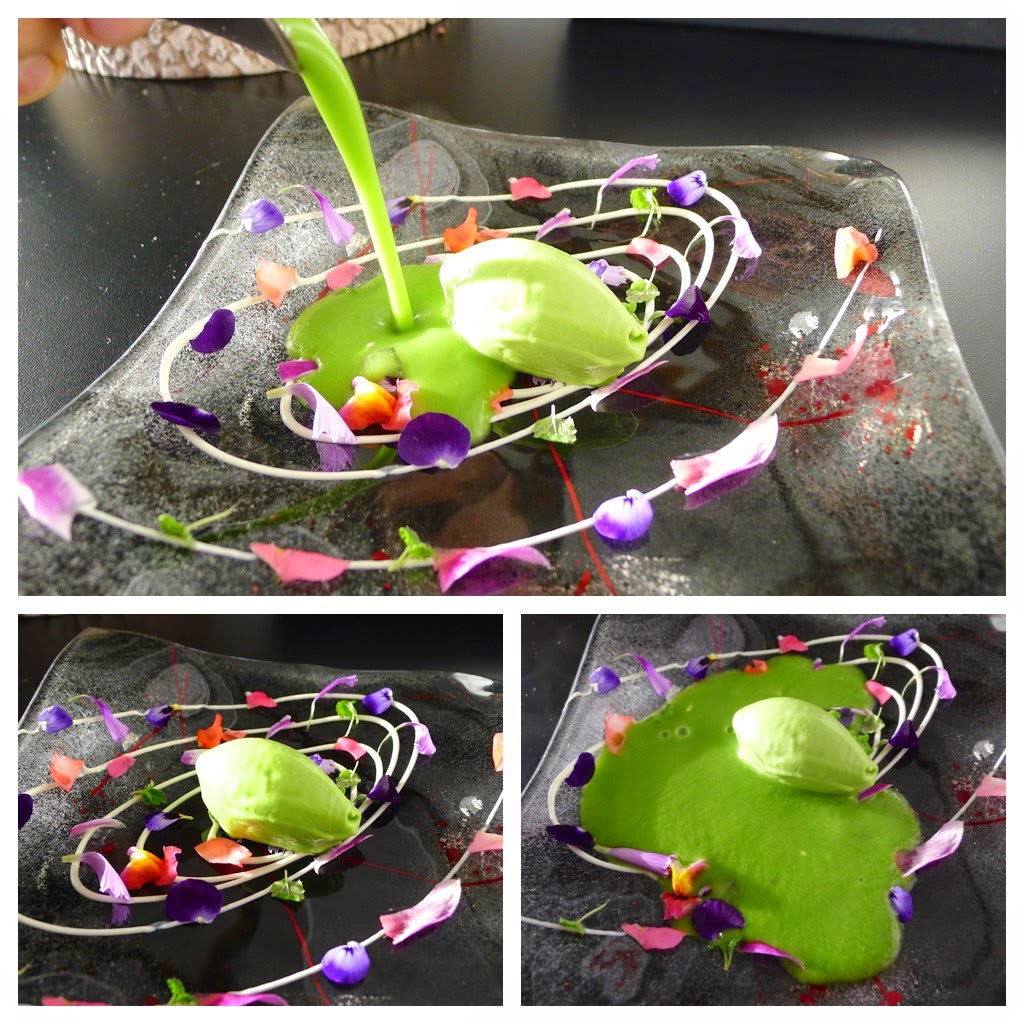 ‘Pea Soup - Hot & Cold’ proved to be a summery dish featuring a pea sorbet and steaming soup – the simple flavours were completed by crème fraiche and more petals. 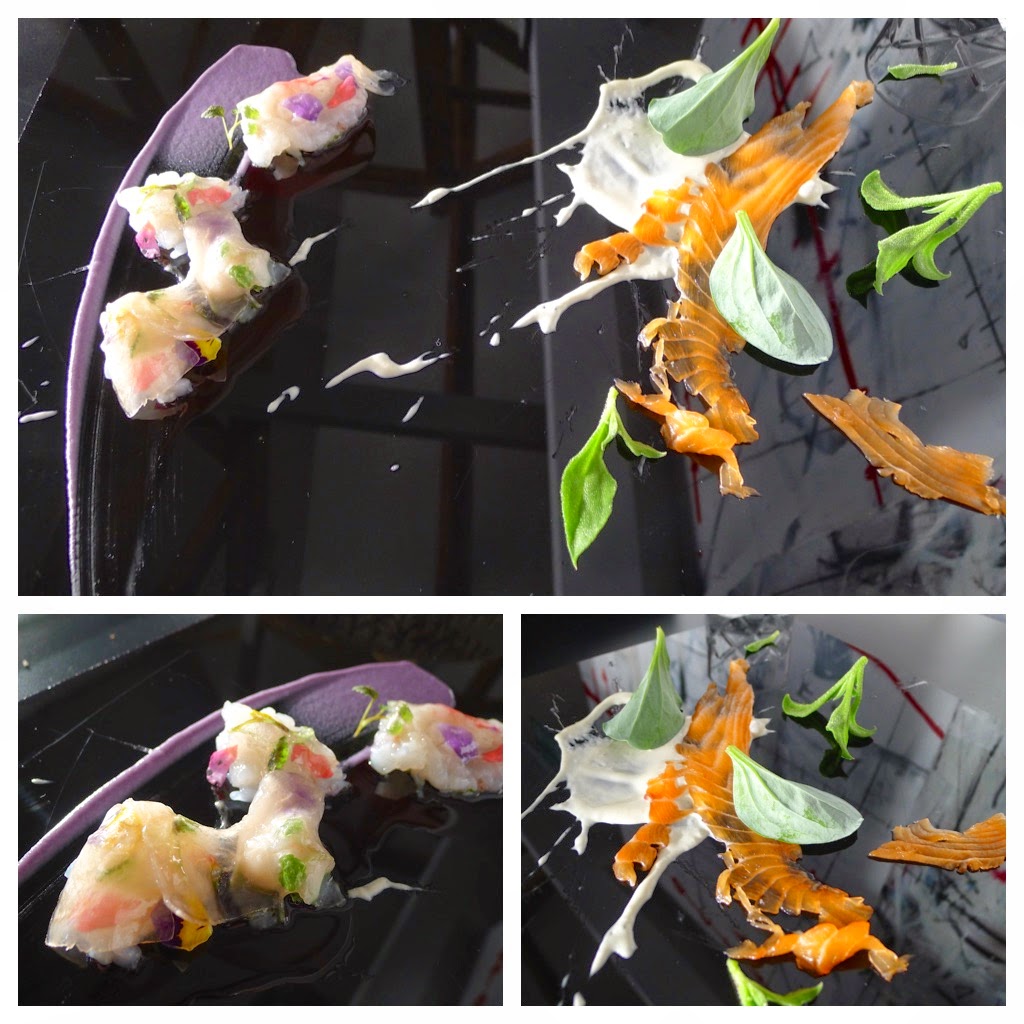 Next up, on a shiny black platter, Michael sent two dishes in one – the Langoustine sashimi, lavender and lardo di Colonnata dish was from the evening tasting menu, whilst the Smoked Salmon with horseradish crème, ice plant and oyster leaf was part of the lunchtime offering. Both were good but it was the control and balance of flavours of the former that really impressed. 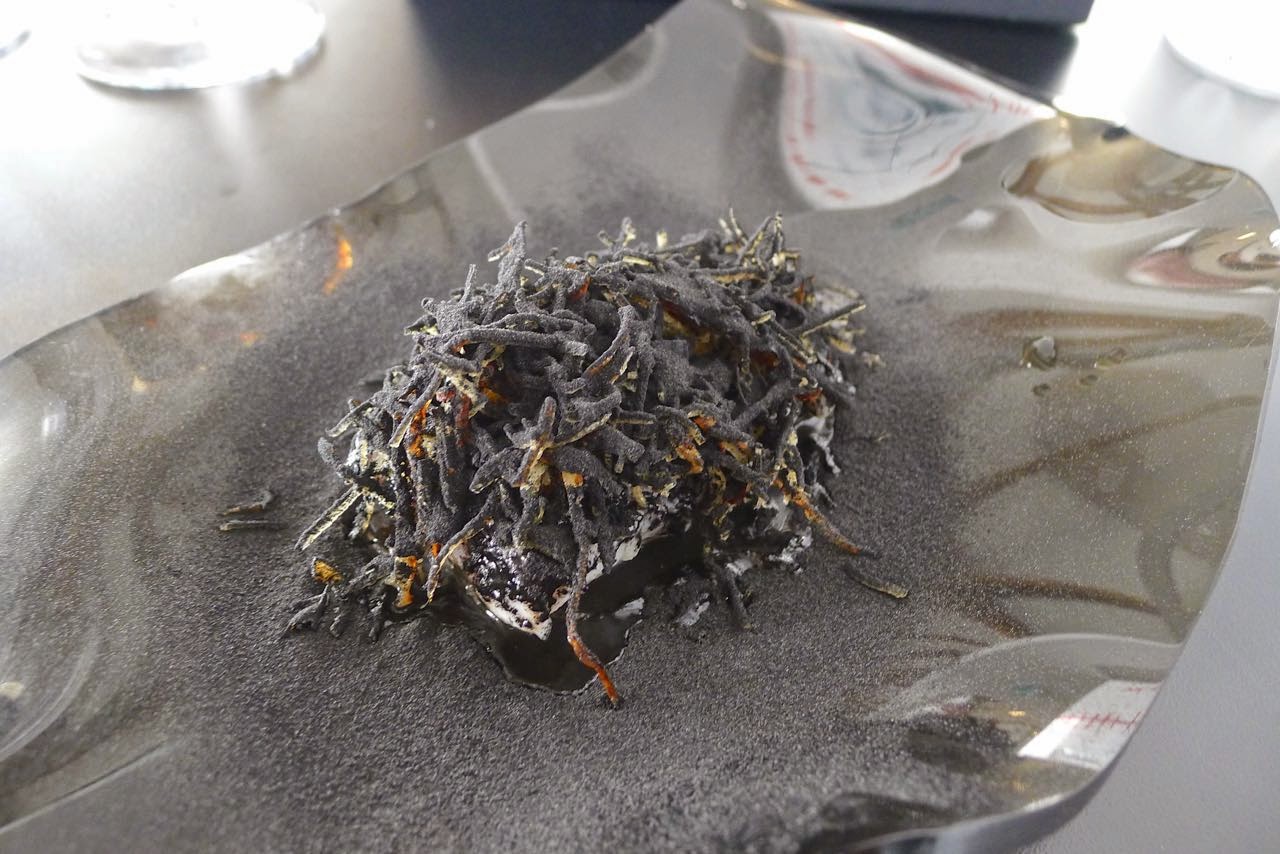 The next dish ‘Black Cod’ was without doubt the sexiest of the lunch -concept and flavour working together. On a sleek black Perspex ‘plate’, a white flaky piece of cod had been topped with squid ink sauce, cod skin dashi, crisp shards of potato and shallots before being veiled underneath a fine squid ink powder. 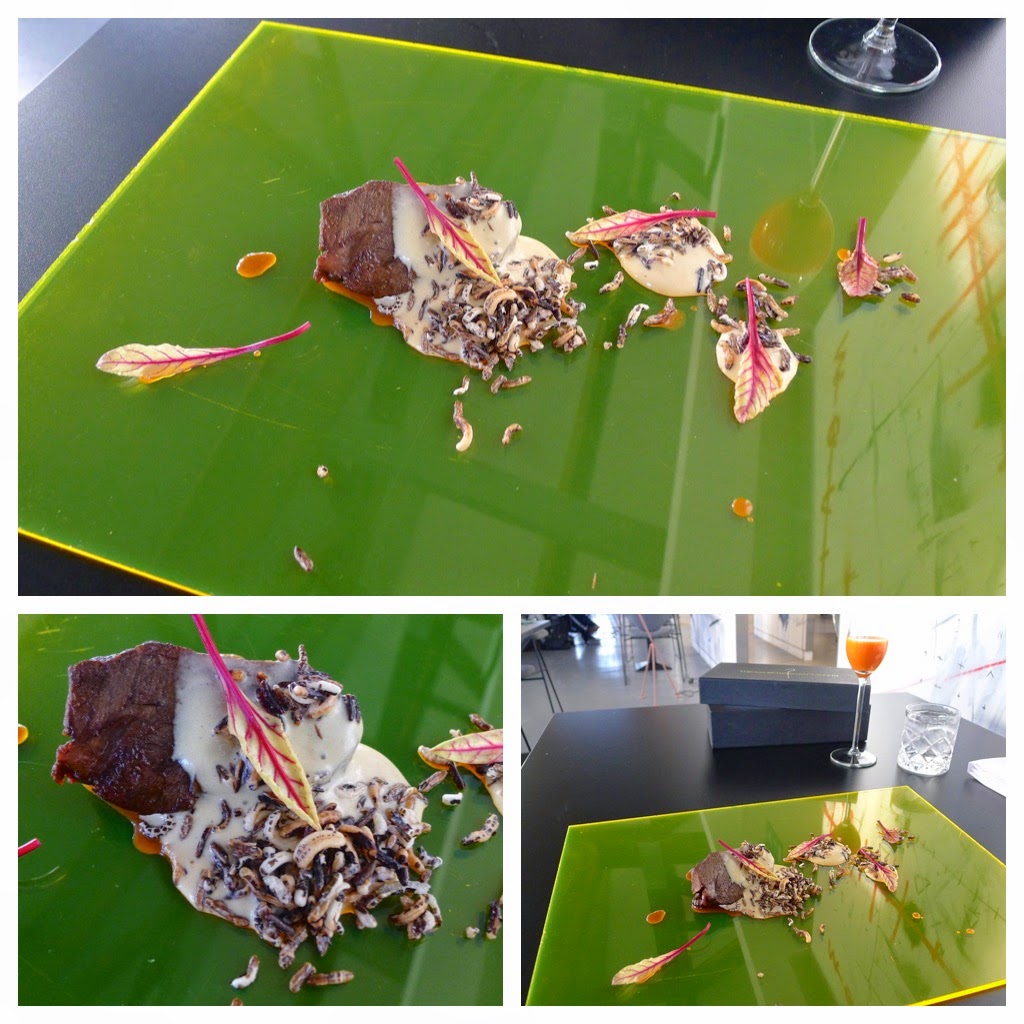 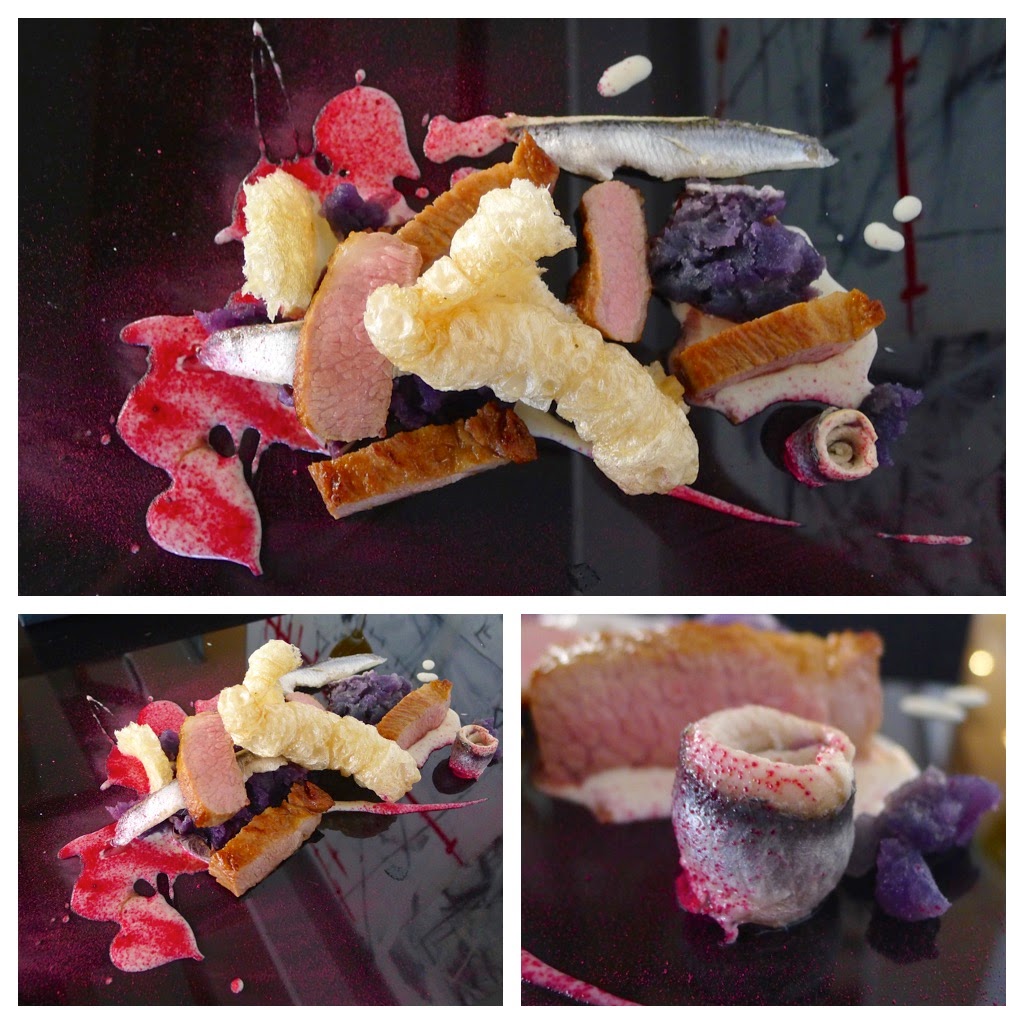 For me, the next dish, ‘Secretos d Ibérica’, was not perfect. The main elements of Ibérico pork (served delightfully pink) and boquerones were perfect bedfellows but I’d like the garlic flavour of the ajo blanco to be ramped up a notch and I’m not a fan of the purple potatoes, especially when served cold as these were. 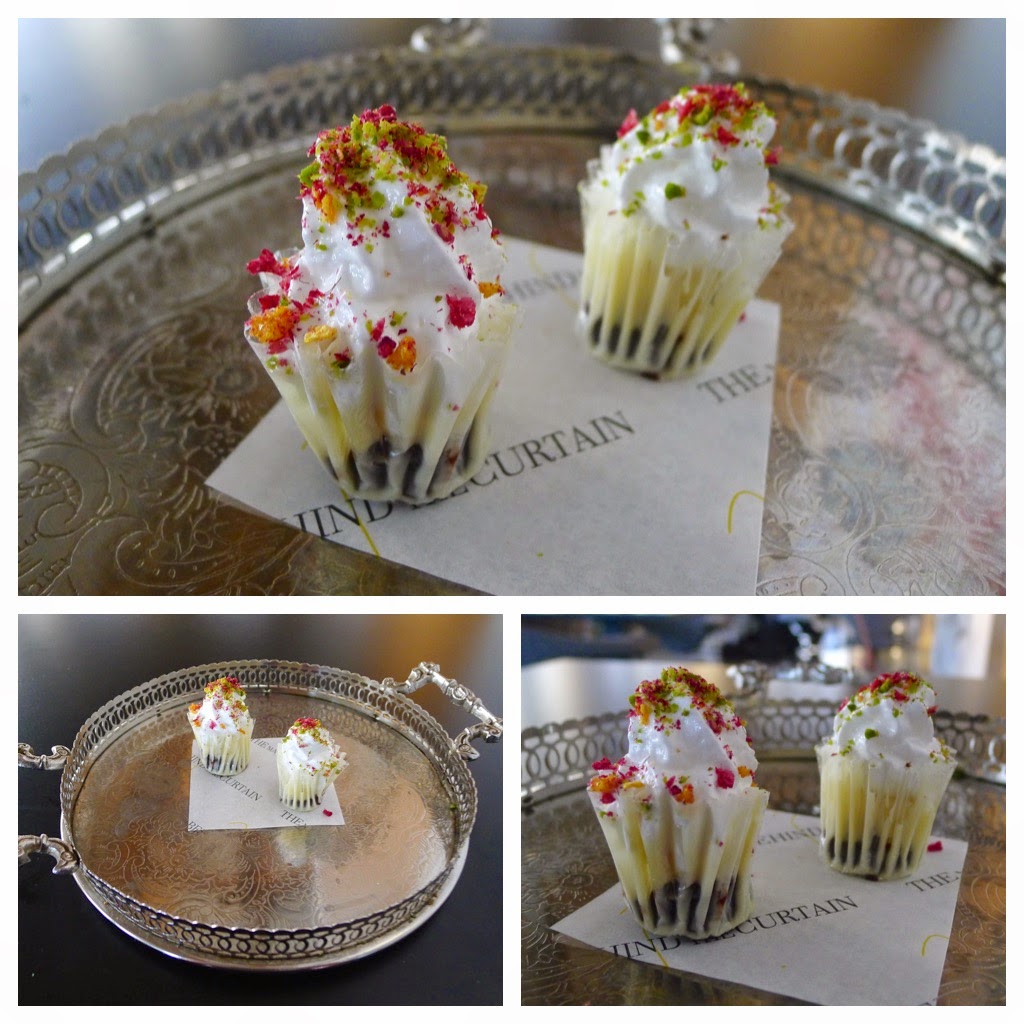 Turning sweet, Mini Cup Cakes made from white chocolate with a liquid passion fruit centre were delightful. They came topped with a silky Italian meringue, freeze dried passion fruit, raspberry and pistachio powder. Oh, the ‘paper’ cup was edible too! 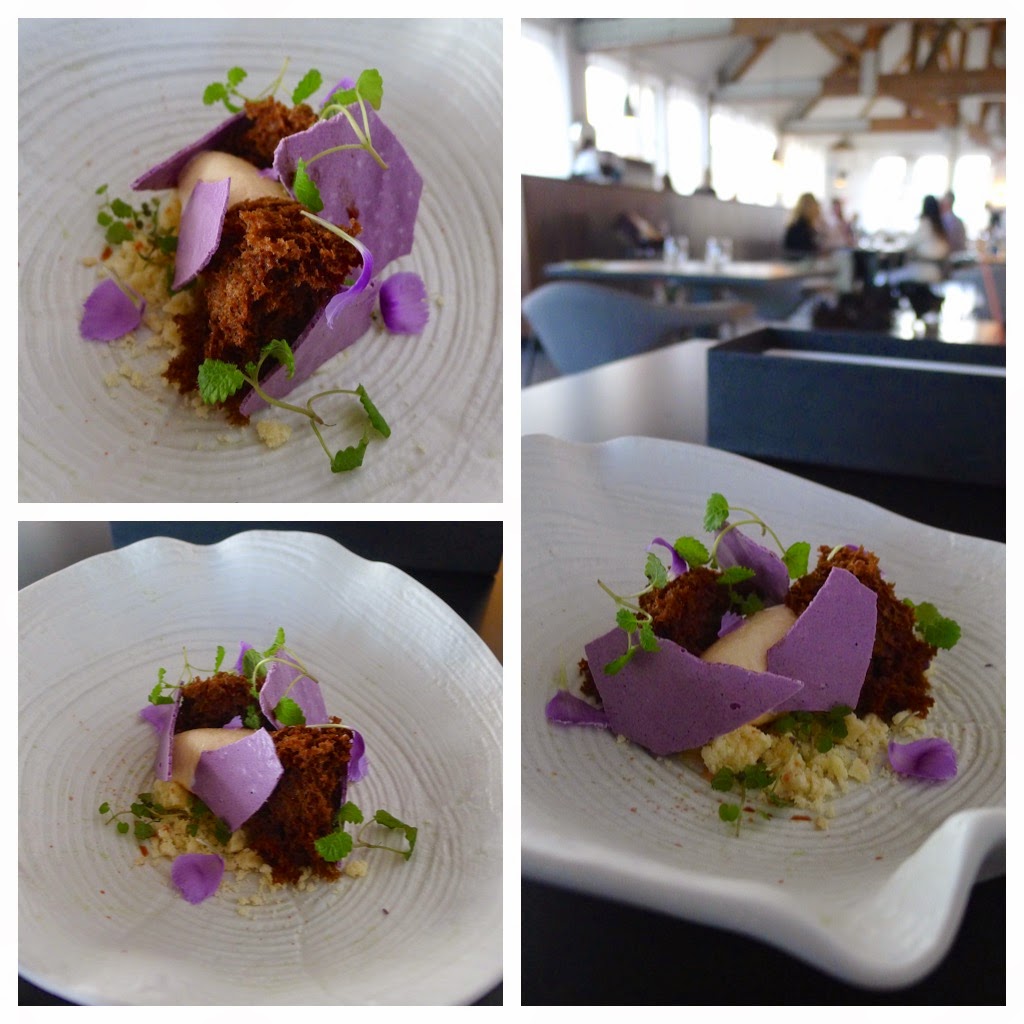 The next dish was a light Black Garlic Cake with milk ice cream and sorrel. This was good but it was the theatrics and flavours of the Thai inspired final dessert that really wowed. With the One of the best dessert dishes I’ve had all year! 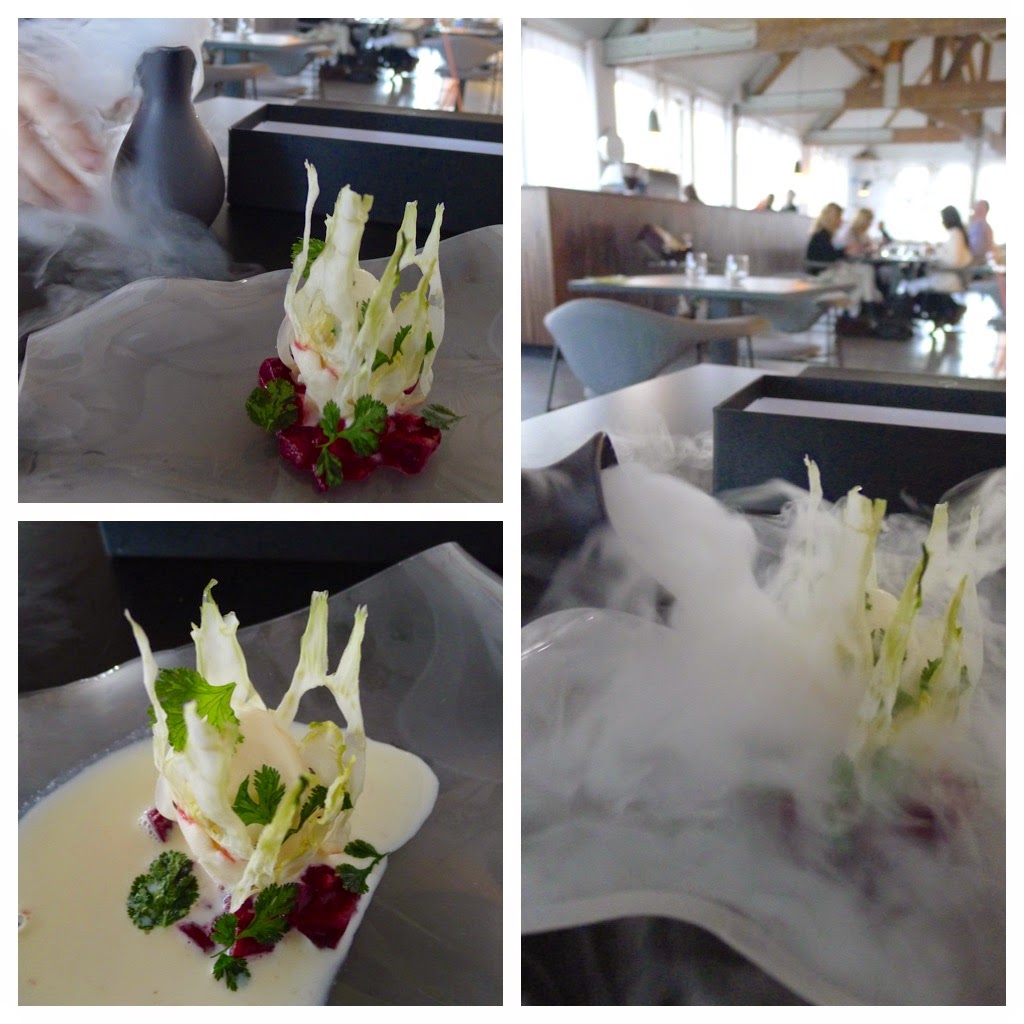 To sum up, The Man Behind The Curtain is a wonderful place to eat… to me, Michael O’Hare has proved unequivocally that he is the most rock ‘n’ roll chef since Gino D’Acampo stole Paul Young’s guitars. 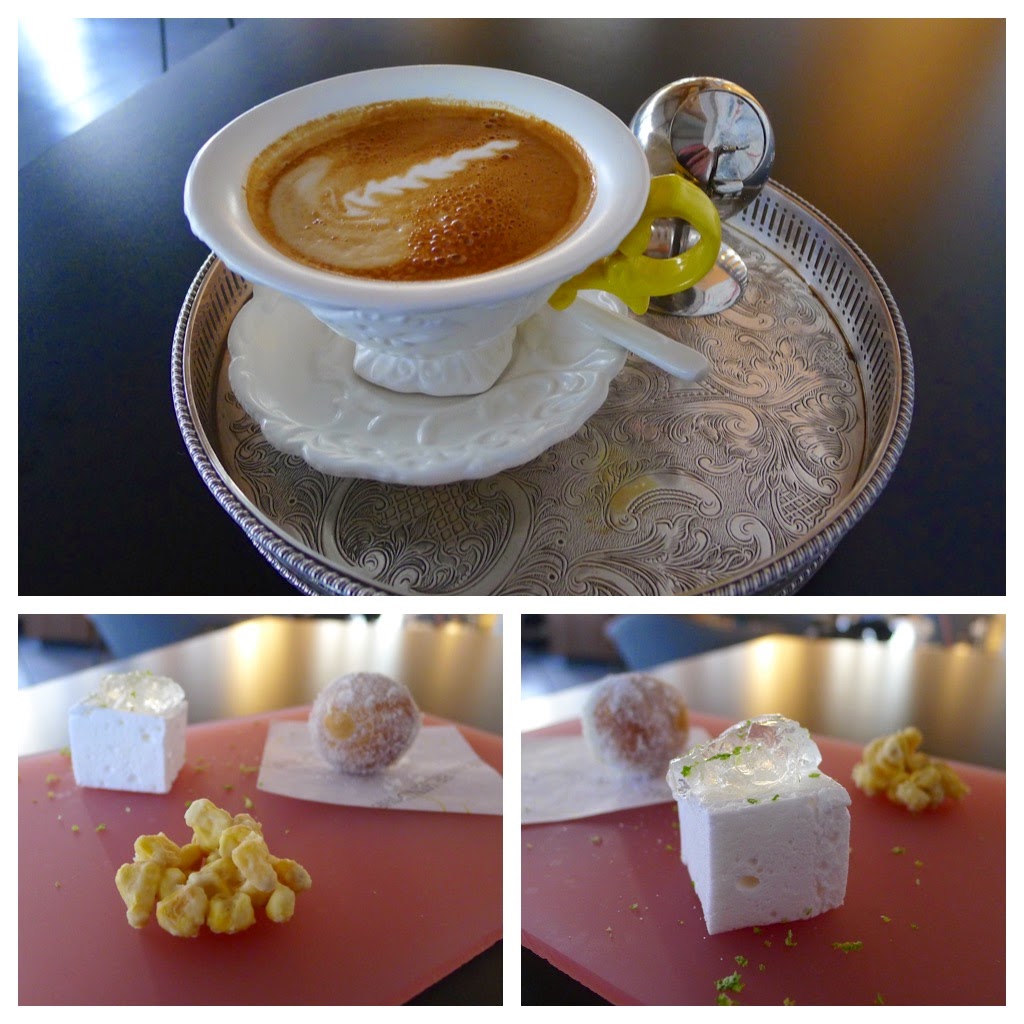 Email ThisBlogThis!Share to TwitterShare to FacebookShare to Pinterest
Labels: 1 Michelin Star, Fine dining, The Man Behind the Curtain, Yorkshire