The Yew Tree Inn is another of Cheshire’s highly regarded foodie pubs. Recently voted the Good Pub Guide’s ‘Cheshire Dining Pub of the Year, 2014’ and listed in both The Good food and Michelin Guides, it also clocks in at just under an hour’s drive* from the centre of Manchester. 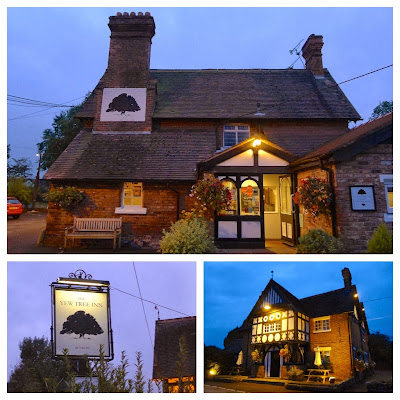 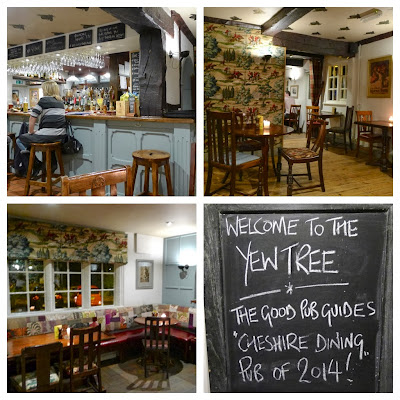 Aside from a couple of locals propping up the bar, the pub indeed seemed very food centric, with most people eating. Despite first impressions being very traditional with beams and wooden furniture, quirky touches such as a wall coved in hunt scene fabric and large flies on the ceiling added a unique charm. A good atmosphere and friendly service are just two of the reasons why I would return… the menu and food being others: 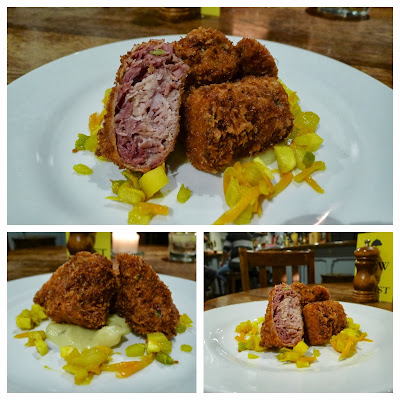 Ham Hock croquettes served with apple & tarragon jam – I really enjoyed this dish… the apple and tarragon ‘jam’ and fruity slaw offering a delightful contrast with the generous portion of hearty ham hock croquettes in their crisp, crunchy breadcrumb casings. 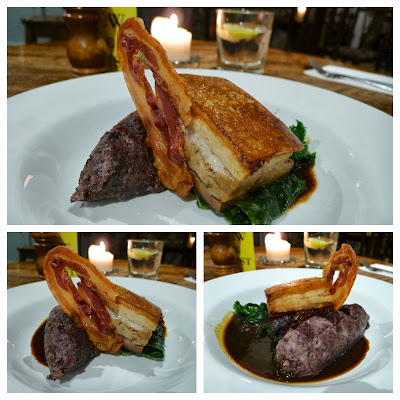 “Three Little Pigs” roast pork belly, Bury black pudding mash and crispy pancetta – this really was the story of the three little pigs: like a house made from wood, the stick of crispy pancetta didn’t really work for me as the skin on the belly provided sufficient crispiness to the dish; I’d have preferred a pig in a blanket, or a devil on horseback for a little sweetness. 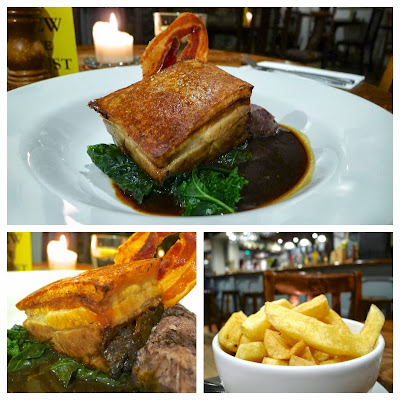 Unlike a house made from straw, the mash did not blow me away as I felt it lacked in seasoning. The happy ending came in the form of a generous brick sized piece of pork belly that would certainly keep the wolves at bay. The gravy and kale elements were great too, as was my side of ‘Pub chips’.

Having just got off a diet and not wanting to pile the pounds back on too quickly, I skipped dessert on this occasion despite the tempting sounding ‘Sticky date & chocolate pudding with hot fudge sauce’ ‘Cinnamon doughnuts with homemade marshmallow & hot chocolate dipping sauce’ and  ‘Jam “Roly-Poly” with custard’. There is always next time…

*Check out my “best ‘gastropubs’ within an hour’s drive of Manchester” page for other places offering good food and a pleasant drive in the countryside.