Steak & Lobster at Alto is the latest incarnation of the second / more informal dining space at the 5* Radisson Blu Edwardian in Manchester's historic Free Trade Hall. 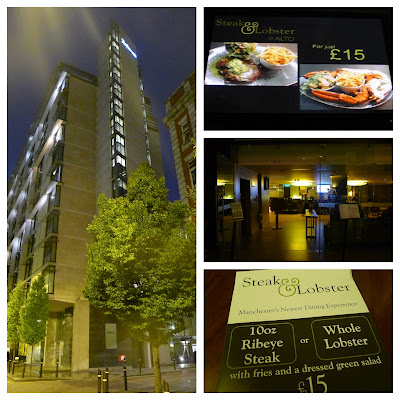 What they say: The latest, inspiring, dining experience to launch in Manchester is Steak & Lobster at Alto restaurant.  The new concept: no menu, just a simple choice between the eponymous mains.
A 10oz. rib eye steak or a lobster served whole. Both are served with garlic and chive butter, French fries and a side salad. Select either option for only £15. That’s it! Nice and simple. Great food, amazing value.
Cemented by today’s trend for simple, quick and quality dining; it will be a hot ticket for those looking to hold impromptu business lunches, the city centre shopper or for those dining with friends.

Steak: £15 for a 10oz Rib-eye with fries and salad that could be ‘refilled’ sound like excellent value and too good to be true. The steak had been cooked rare as requested but was not very flavoursome – I don’t like to criticise this as in most Manchester restaurants you can expect to pay in the region of £25 for a rib-eye; I expect you get what you pay for. 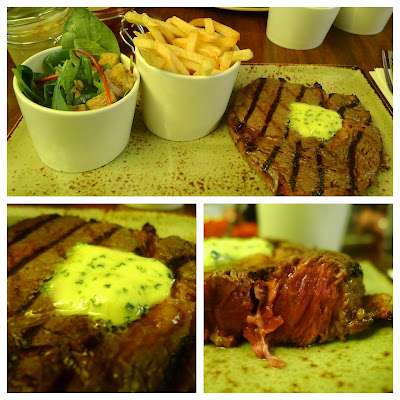 Lobster: a whole lobster for £15 again sounds like excellent value. Sadly this one had shrivelled up meat in that claws that I think suggests the fella has recently ‘moulted’ and not yet grown into its new pincers – not a lot the restaurant could have done to have known about this but still a little disappointing. 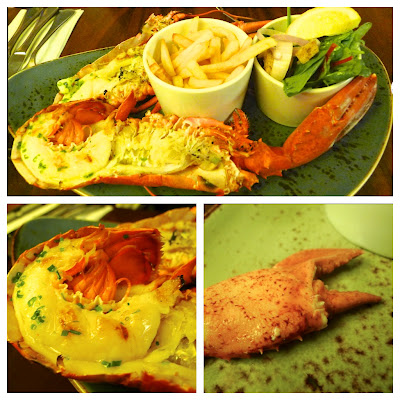 Food high points: The fries were sufficiently good for me to request a second portion but I wouldn’t really say they were a ‘high point’. In fact, I didn’t find any and I did not get the impression this was because it was the opening night… the food came out promptly and was well cooked… for me, it just lacked a little in overall quality but was made just about acceptable by the price. 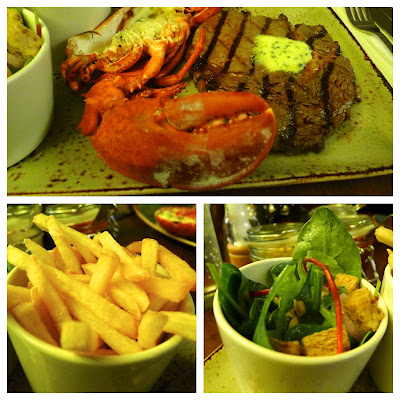 Food low points: In addition to the details mentioned above, I found the onion in the salad too harsh. For me, when a menu is so simple the food needs to be spot on.

Décor / ambience: Chairs were a low point… literally: on arrival we were shown to seating at the side of the restaurant. I did the thing decreed by etiquette and offered my wife the seat on the banquette overlooking the dining room. I took up the plush looking velvet “seat” (possibly a footstall) facing my wife… it was ridiculously low. We tried swapping positions but now, I towered over her. Instead we took up a table in the middle – these chairs were too narrow forcing my legs into the centre of the table and the large central leg and raised plinth… altogether this made for an uncomfortable dining experience. I also found the lighting a little odd – very dark at the entrance/bar area and sporadic in the dining room. 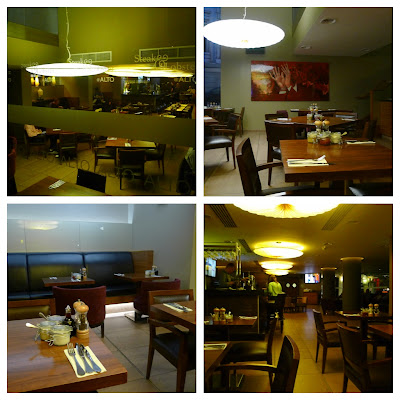 Service: I asked a fella if the lobsters were ‘Nova Scotian’ or ‘Native’ and was told, “Yes, Nova Scotian… from Scotland.”

Unconvinced, I asked one of the female waitresses where the lobsters were from and was told, “From a tank… nearby… in Warrington, I think.”

I gave up but a nearby chap (a guest of the hotel), very impressed with his lobster, asked, “How long have you been doing this for?” The waitress went away to consult with another and came back with the answer, “From Scotland.”

Verdict (Would I return?): I love the concept and it is cheap - personally I’d rather pay a premium and get a better product but I can see how hotel guests and people nearby wanting a quick, simple meal would enjoy what is offered.