With all its wonderful boulangerie, patisseries, chocolatiers, bistros, vins, cheeses and markets, choosing Paris was the easy part.

Choosing where to stay, I found a funky little boutique hotel just off Montparnasse called Hotel Academies des Arts on the ever reliable Mr & Mrs Smith website - which then just the mammoth task of choosing where to eat.

When traveling, this for me is always a time consuming job as I want to get a full flavour of the city I am visiting. This may mean seeking out the finest, most authentic, historic or iconic restaurants or seeking local flavours and specialties through street food and informal eateries.

In Paris, the birthplace of André Michelin, I knew I had to select a 3-Michelin-starred restaurant. With the two-starred Passage 53, a couple of one star places and some top notch bistros down as definates on the itinerary other meals would be taken from a shortlist of ‘maybes’ - all based on the concept, if we are in 'the right place at the right time'. 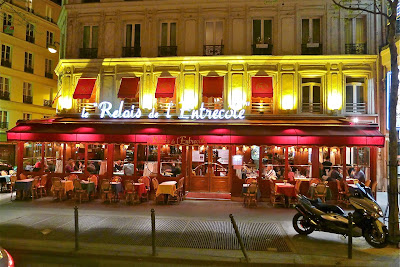 One place on the ‘maybe’ list was Le Relais de l’Entrecôte , mainly because they are set to open a carbon copy in Manchester’s King Street and I thought it would be good to try the Paris elder. 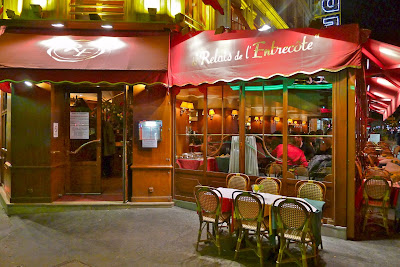 Arriving latish on a Sunday evening, I knew our eating options would be limited and thought we’d have to make do with the bottle of champagne and selection of Pierre Hermé macarons that I had arranged to be in our room on arrival. Whilst in the taxi however, my wife spotted Entrecôte – what is more it was less than 200 yards from our hotel and open - "Right place, right time... Result!" 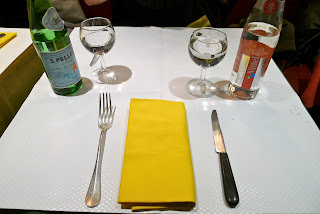 The place itself was heaving, although the queue was short and well managed. Tables seemingly being turned relatively quickly and we only waited about five minutes before being seated. 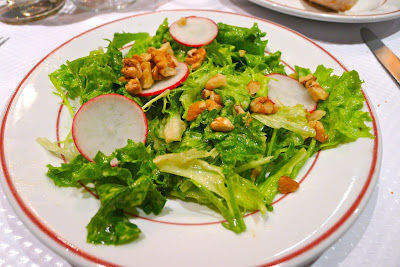 With all the decision making we had made to get us here Le Relais de l’Entrecôte’s unique concept now seemed refreshingly simple - there is not a choice of starters, instead all diners are presented with a green salad, radishes and walnuts. The salad arrived, crisp and fresh, dressed in lively mustard vinaigrette.

Similarly, only one main course is available, steak frites, served with a ‘secret recipe sauce’ – the only decision that needs to be made involves choosing to have the steak ‘Bien cuit.’ (well done), à point (medium), saignant (rare) or ‘bleu.’ 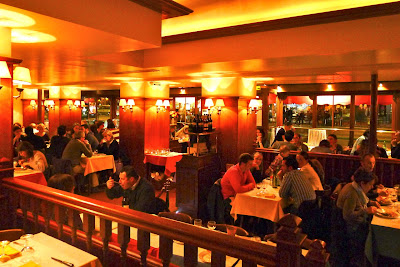 My wife selected ‘à point’ whilst I went ‘saignant’ – in actuality there didn’t seem to be much difference and I’d guess we were both given rare. (I’m not one to make a fuss if my steak is not cooked exactly as I like it – as long as it’s not cremated it’s all good to me.)

When the steak arrived, given the ‘touristy’ nature of the place and reasonable prices, I half expected shoddy meat - pleasingly though, the quality exceeded my expectations. Likewise, the accompanying French fries were also better than expected and well seasoned. 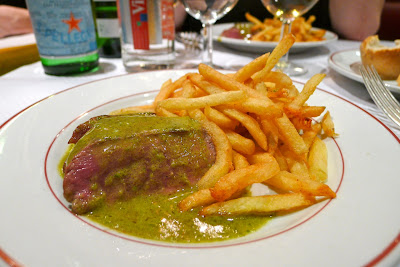 Whilst, for me, the 'secret sauce' was not especially appetising and will certainly not replace a classic Béarnaise as my favoured steak accompaniment, it’s good to try different things and was still enjoyable enough to find itself mopped up with the fresh French baguette. 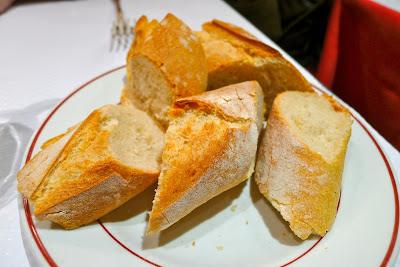 For those intrigued by the ‘secret’, a quick Google will reveal various conjecture as to the mysteries behind the sauce with ingredients ranging from and including: butter, chicken livers and stock, fresh thyme, thyme flower, tarragon, marjoram, dill, rosemary, basil, paprika, anchovies, whipped cream, white mustard and seasoning.

Another Entrecôte ‘gimmick’ involves bringing the steak to you in two stages, with ‘one half held back to keep warm, so you can enjoy it at its best and is accompanied with more freshly prepared frites.’ Although my wife was full after her first plate, living up to my 'Hungry Hoss' moniker got the nod in just in time for her to also indicate for more. So after eating three plates – I suppose I have to give it a thumbs up overall.

For those missing the opportunity of agonising over a menu, the comprehensive dessert selection features the best of classic French goodies – you don’t have to be au fait with the language to understand such delights as tarte, délice, glacé, mille-feuille, fromage, sorbet, profiteroles, gateaux and chocolat. 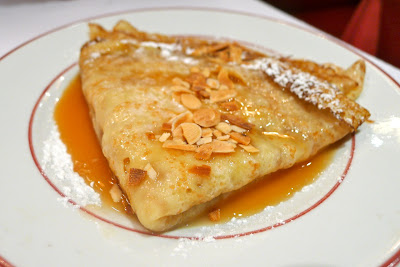 My wife selected La Crêpe Brûlée whilst I chose the impressively stacked Le Vacherin Du ‘Relais’ – both were delicious. 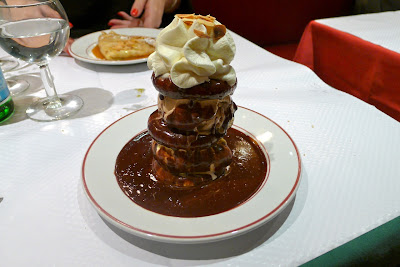 Thoughts naturally cast to how well the Le Relais de l’Entrecôte concept will work in Manchester – it will certainly be interesting to see and great to be able to compare with its Parisienne doyenne.