I like a challenge and the one I have set myself today is to compose a post about a restaurant in Cheshire’s Alderley Edge without mentioning Premiership footballers, Wags, Bentleys or any of the cast of Coronation Street. That should include not starting with the fact that, regular customer and Man Utd manager, Alex Ferguson officially opened ‘The Alderley Restaurant’ at The Alderley Edge Hotel, in 1994. I’m sure all this is interesting to football and celebrity fans but has been said many times before.

Instead, I’ll start with what should be more interesting to readers of a ‘foodie blog’ - the venue, the chef, the service and, of course, the food!

The Venue
The fifty-roomed hotel, owned by the J.W. Lees brewing family (Look our for their new ‘all-malt British beer created by Marco Pierre White’ called ‘The Governor’; named in honour of Marco’s father’s greyhound) is housed in one of The Edge’s original grand mansions. Built in 1850 as a private residence for a rich Mancunian industrial family, the Elizabethan-Gothic style building has also been home to a family of cotton merchants, a doctor and also, during the Second World War, US servicemen.

The 3 AA Rosette ‘Alderley Restaurant’ is very much a typical hotel restaurant, albeit with an extra sprinkling of quality. The bar and lounge area, features modern tub style leather chairs; comfortable leather chairs are also present in the dining room. The pièce de résistance in the room is unquestionably the baby grand piano; the pianist deftly played mellow versions of show tunes through the evening.

The muted greys and creams of the walls are very sophisticated and pops of rich tonal purples, oranges and umbers add a modern note to the overall elegant feel. Artworks include black and white photographs depicting images from the surrounding Cheshire countryside. The dining room is located in a large Victorian style conservatory, the original brickwork of what would have been an external wall complete with ornate lintel make for an impressive location. A classic room with contemporary touches that reflects the chef’s cooking.

The Chef
Hailing from ‘down the road’ in Rochdale, creative Head Chef Chris Holland has been in charge of the kitchen since 2006, having worked there for some years before promotion. His food philosophy is “Modern British food, locally sourced ingredients, fresh clean flavours.” This is highlighted in his daily changing Market Menu; as well as the Lunch, A La Carte and Vegetarian menus, where quality produce such as Cheshire and Cumbrian fell bred lamb, are accompanied by the North West’s finest seasonal vegetables and locally sourced and foraged produce.

The Service
For us, the weakest part of the evening considering the restaurant is ‘tipped for a Michelin star’. Although, I would not consider the service to be bad, with certainly no significant errors, little tweaks in this area would elevate the dining experience to being more into line with what we have come to expect form a starred establishment. In my opinion, the food that we were served wholeheartedly deserves such an accolade and matches the quality that we have received from many a starred chef.

The Food
Being a little mindful of our budget and enticed by the dishes, we opted for the cheaper Market Menu (we will definitely go back at some point and try the Tasting). 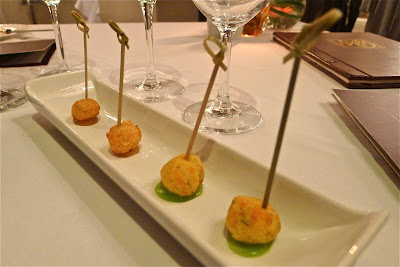 We were served a couple of different amuse bouche dishes. The first being delightful kromeski style ‘Bonbons’ with accompanying fruity gelées; the zingy lime one being my particular favourite. 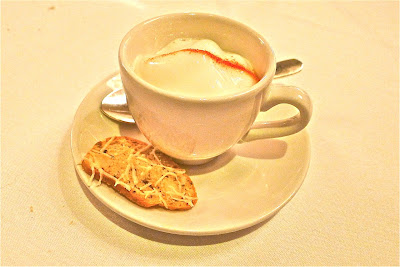 Next, came a dinky espresso cup and saucer containing Tomato & Cucumber Espumas with a tomato powder sprinkled on the frothy top – lovely intense flavours, like a frothy gazpacho. This was served with a delectable Parmesan and almond biscotti. 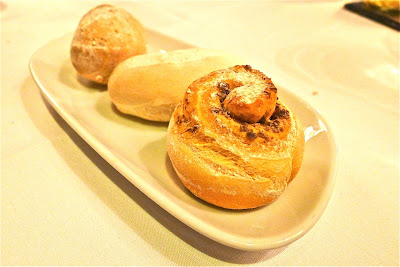 Bread served included a white, a granary and a tomato and olive. All were delicious but the tomato and olive bread was one of the nicest rolls I have tasted in a long time – I couldn’t get enough of them! These (like most of the menu) are made fresh on the premises; you’d be surprised how many top restaurants do not make their own bread. 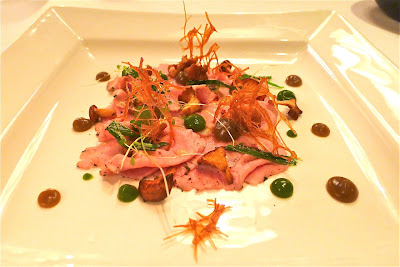 My wife’s chosen starter was the Carpaccio of Truffle Infused Veal, Pickled Girolles, Mushroom Gel, Tarragon – a visually impressive dish, with flavours to match. Excellent veal and delightfully acidic pickled girolles. My wife is still raving over this course! 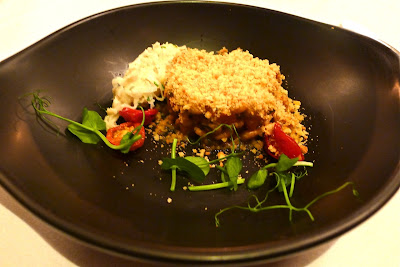 My starter was Massalla Spiced Brown Shrimp “Crumble”, Apple and Celeriac Slaw, Watercress – I adore brown shrimp, and regularly buy them from the fishmongers in Manchester’s Arndale Centre but have usually eaten them straight from the bag before I even get them home! Next time, I will do my best to resist the temptation and have a go at recreating this dish. Good texture combinations and lovely, clean flavours. 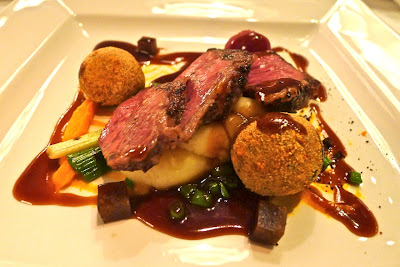 My wife’s main was something along the lines of Cheshire Beef, Charred Leeks, Summer Truffle Doughnuts, “Oxo” and “Guinness” with Ken Holland’s Beets. I can’t be 100% sure if I’ve got that right because I was enjoying mine so much that I forgot to take a proper mental note. I did manage to sneak one of the truffle doughnuts, which was delicious and swipe a chip though the intense, sticky reduction - wonderful strong flavours. 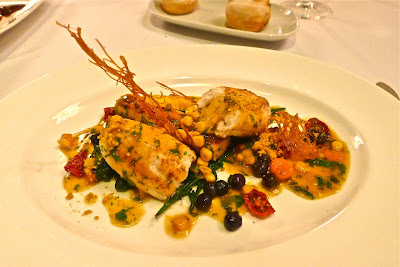 My main was the amazing Cornish Lemon Sole, Smoked Salmon and Crab Boudin with Corn Broth. Lemon sole is a favourite fish of mine and the accompaniments that Chef Holland and his team prepared certainly did it justice – the boudin (or sausage) of salmon and crab added additional dimension of seafood flavour to the dish that complement the sole. The small dark spheres that you can see in the picture that look like olives were actually beetroot. Further great flavours and texture came from the kernels of corn and crunchy samphire.

To accompany the dishes we ordered sides of Triple Cooked Chips and a Truffle Scented Mash – not that we needs them as portion sizes were generous; just because we wanted to see what they were like. They didn’t disappoint. 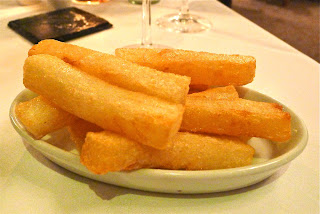 The chips were, to my mind, perfect! Crisp on the outside, fluffy in the middle! Strange isn’t it? You can take all this fancy ingredients and modish cooking techniques but a well-cooked chip is hard to beat! 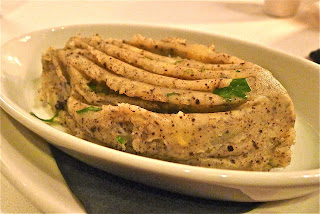 My wife was equally impressed with her mash – she’s a bit of a mash aficionado and even I who am not a huge mash fan had to concede that the truffle touch elevated this to another level. 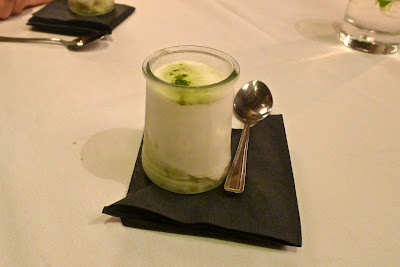 Pre dessert was a delightfully sharp and sour palate cleanser featuring a Mint granita with a lime espuma topped with a sprinkling of matcha. I loved this; the lime was too sharp for my wife, which meant that I had two… bonus! 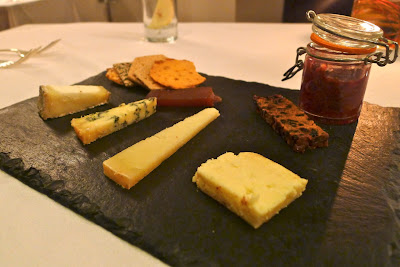 As we waited for our desserts, one of the front of house team approached to say that there would be a slight delay as the chef was not happy with the soufflé and that they would provide a complimentary cheeseboard while we waited. An unnecessary but very welcome measure. The ‘homemade’ condiments included an intense, fruity plum chutney and a slice of rich fruitcake. 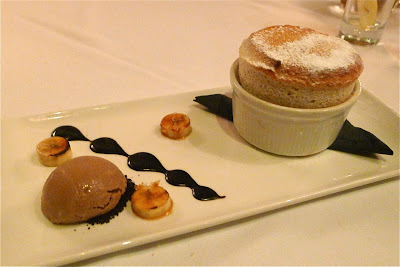 After the cheese, a Hot Banana Soufflé with Cluziel Chocolate Ice Cream that met the chef’s high standards made its way to the table. All I can say is that it was well worth the wait. Perfect. 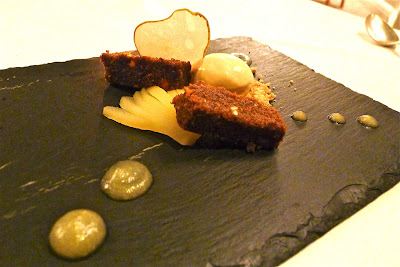 My choice od dessert was the Treacle and Hazelnut Cake, Poached English Pear, Salted Caramel Ice Cream – its now September and pears and treacle are classic Autumnal flavours but this dish was cleverly created light enough to be enjoyed in the tail end of Summer. Salted caramel (and chocolate) is bang on trend moment; Heston even has a Salted Caramel Popcorn Ice Cream in his new Waitrose range. For my taste, this one could’ve taken a little more salt but what was especially good was the pear crisp - a delightful dessert. 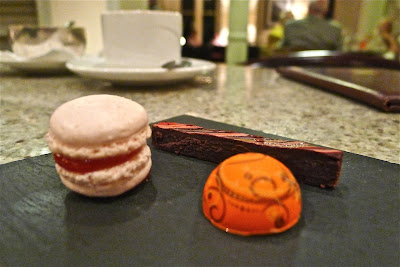 After the meal, we opted to take our coffee in the comfort of the lounge area to further enjoy the pianist at closer quarters. The petit fours consisted of two beautiful chocolates made in house and a mini strawberry macaron. I love macarons and made some for myself for the first time the other day; so now that I am an ‘expert’, I’d say that the batter had been over beaten as it was too dry and meringue like - still very tasty though and a great end to a fabulous meal.

As I said earlier, the Alderley Restaurant has been hotly tipped for a Michelin star and from my experience of dining in starred establishments they are surely not far off. Food wise, they are pretty much there and I’ll certainly be going back to enjoy the tasting menu as soon as possible.