Ever an optimist, whenever I stumble across an old lamp (admittedly rarely), I give it a spirited rub in the hope that Barbara Eden will appear and grant me three wishes.

My first would be for immortality; I’d then ask for unlimited riches and the third would be a decent gastropub within a few minutes drive of where I live.

Unless I rapidly find and rub many more lamps (or move house), none of these seem likely any time soon.

If you live in Bury however, you could be in luck. Probably not on the immortality front and I’m guessing if you had unlimited riches, you’d have already move far away from Bury… but, at least, you do now have a decent gastropub! 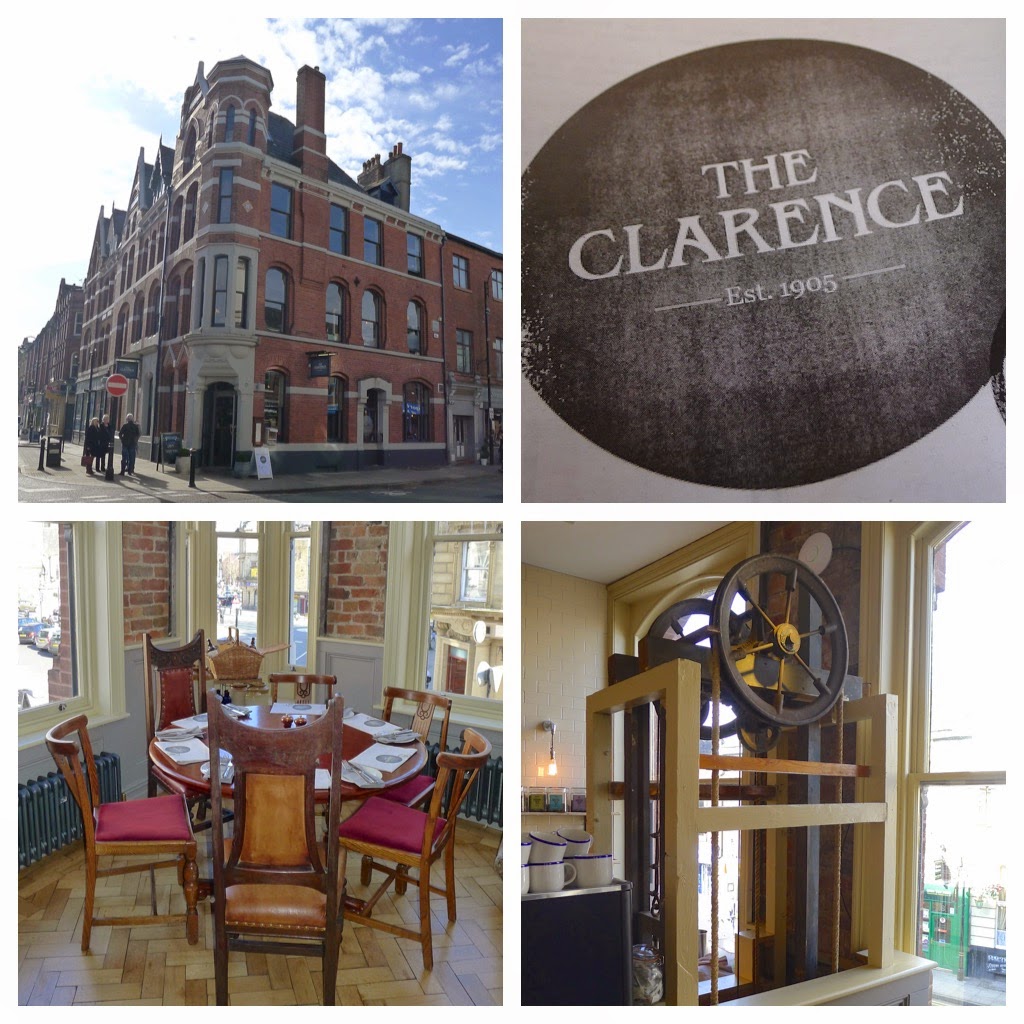 Not just any old gastro pub either… after 3 years of restoration, The Clarence (established 1905) has been restored with many original features, plus a few modern touches. Not least of which is the ‘Silver Street Brewing Co.’ microbrewery, living the pub’s basement.

In the kitchen, Manchester born, tattooed chef Liam Rutherford returns to the north after spending several years working for Gary Rhodes; including stints at the Michelin starred W1 and as Head Chef at Rhodes @ The Dome. 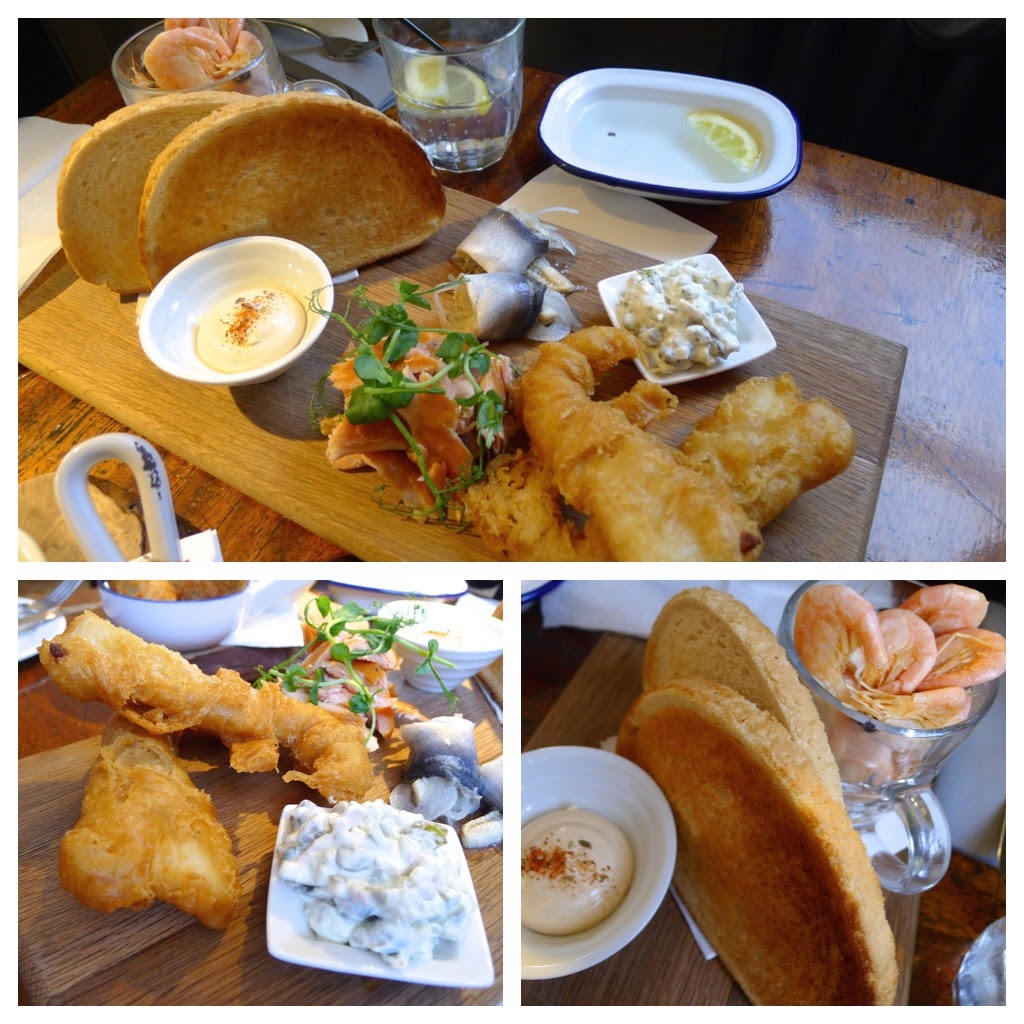 “From the Sea” – the ‘share board’ featured hot smoked salmon, beer battered haddock, ½ pint of Greenland prawns, some delicious rollmops and ‘Dave’s crusty white bloomer’. It was all good stuff and nicely done. The beer batter had great flavour; my one piece of constructive criticism would be for a little more piquancy in the tartar sauce. 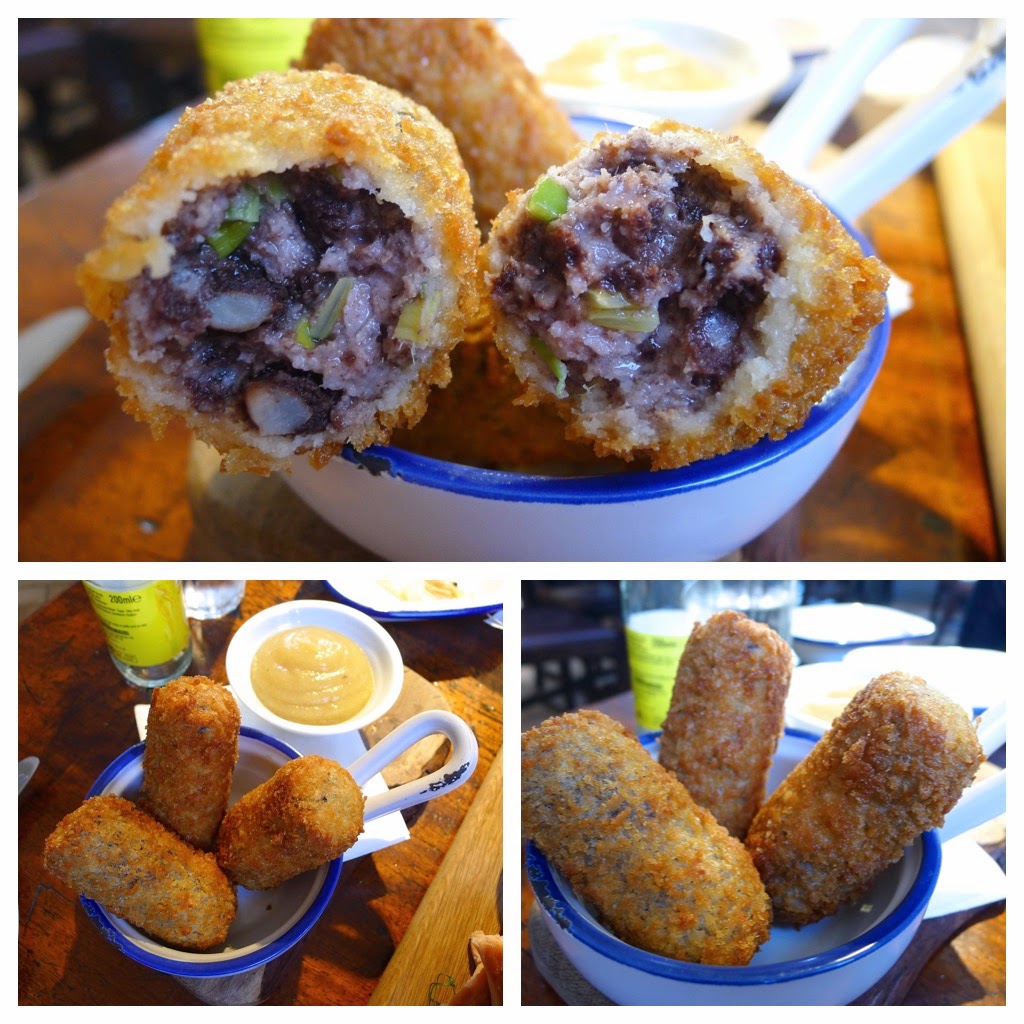 Bury Black Pudding & Leek Croquettes – making use of the celebrated Bury Black Pudding, these croquettes were very good indeed. A robust apple sauce laced with the Clarence’s own Silver Street Porter acted as the perfect consort. 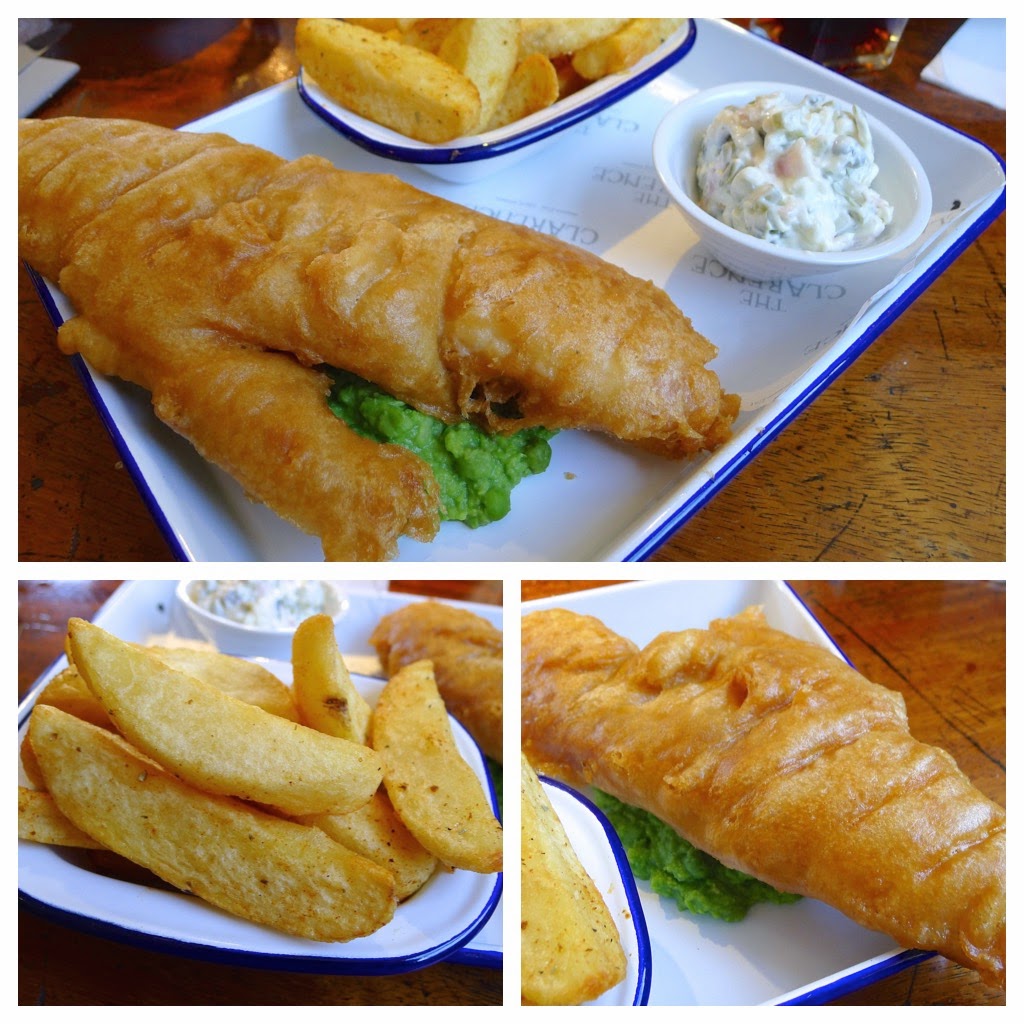 Silver Street Beer Battered Fish & Chips – with the same beery batter from the sharing board, this was another tasty piece of battered cod. I liked the ‘mushy peas’ had been mixed with a few whole ones for texture. 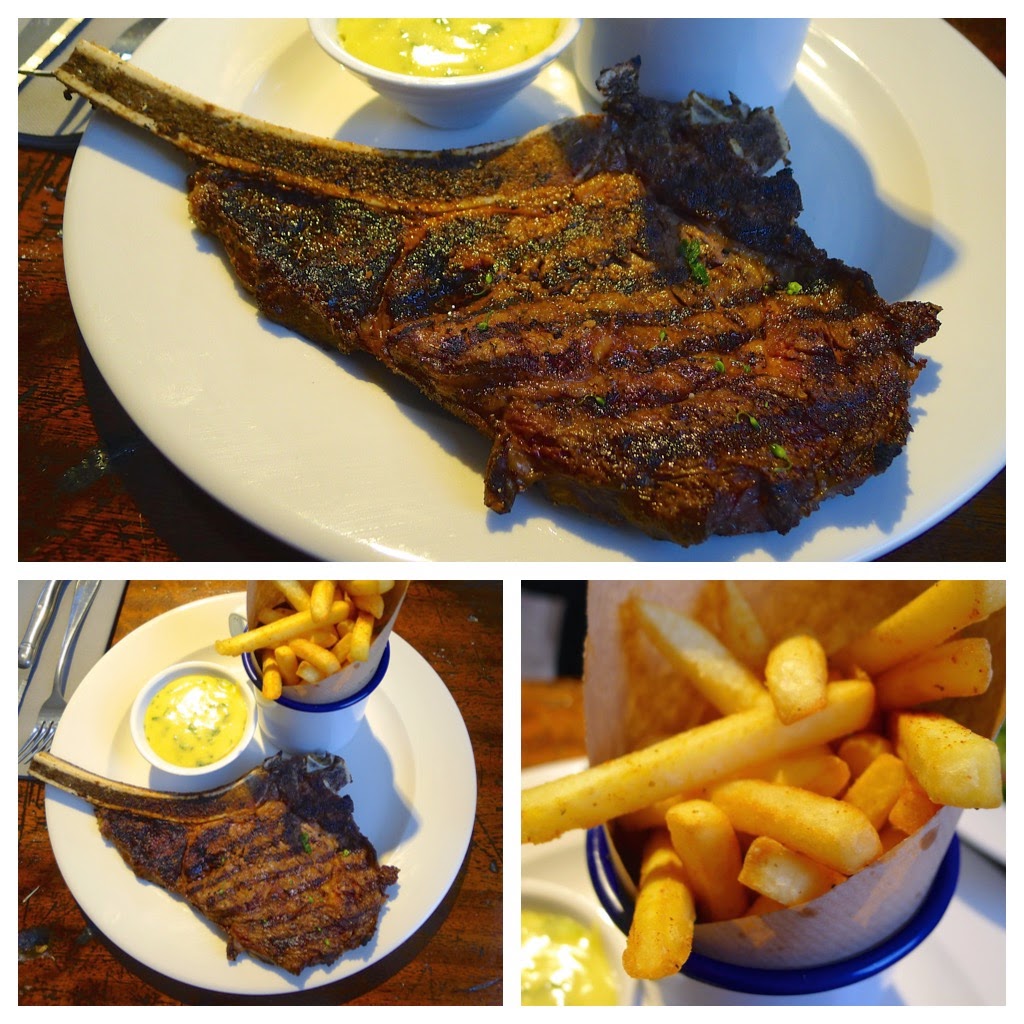 16oz Côte de Boeuf – the steak had some nice markings from the char grill and came with a decent enough béarnaise. The skinny fries come with a house seasoning as standard so it’s worth mentioning when ordering if you’d rather have them plain. 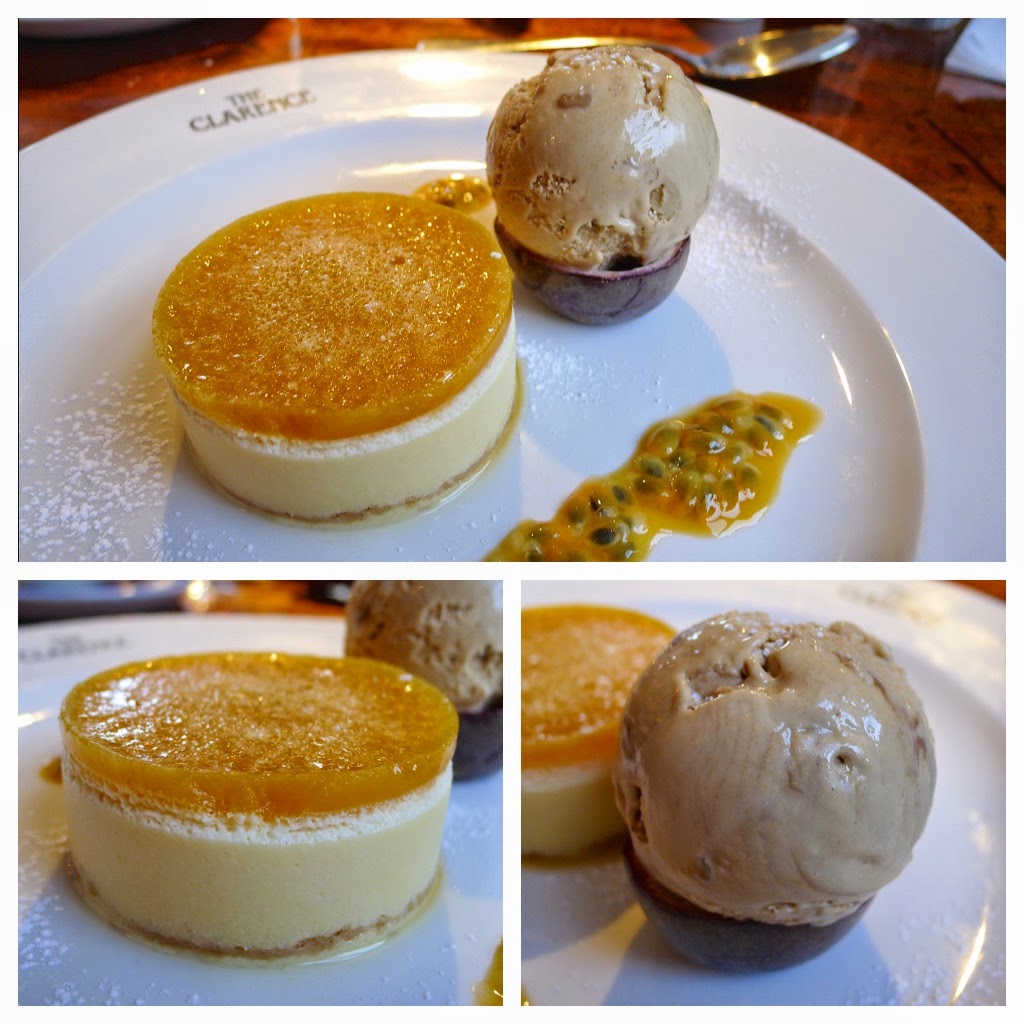 Passion Fruit Bavarois, Carmelita Ice Cream – a lovely end to our meal with plenty of deliciously sharp, tropical passion fruit flavour from the fresh fruit and in the gelée.

With a Sunday Roast that comes in 3 sizes – kids, traditional and ‘Full Monty’ which includes cauliflower gratin, champ mash and garlic & herb crusted bone marrow – we are sure to be back soon!