A Beginner’s Guide To The Best Breakfast in London: Shoreditch & nearby 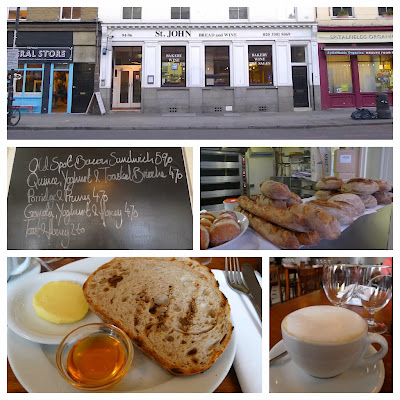 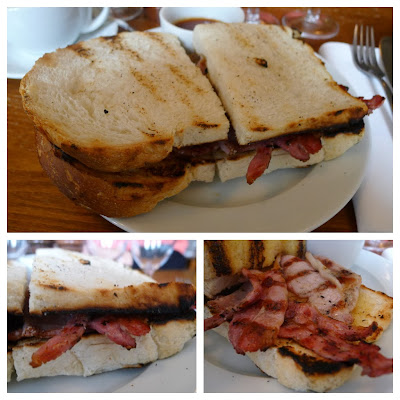 With a bacon sarnie named by the Hardens restaurant guide as “the best bacon sandwich you’ll ever eat”, the simple perfection of Fergus Henderson’s St John Bread & Wine makes it one of my favourite places to eat in London (if not the world). Also: Toast & Honey. 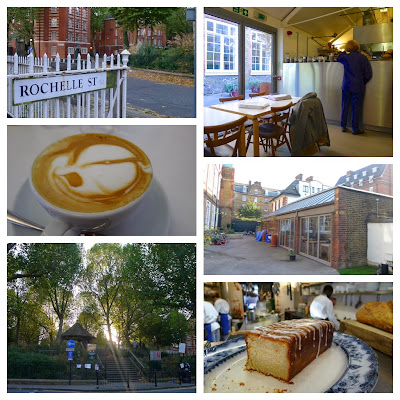 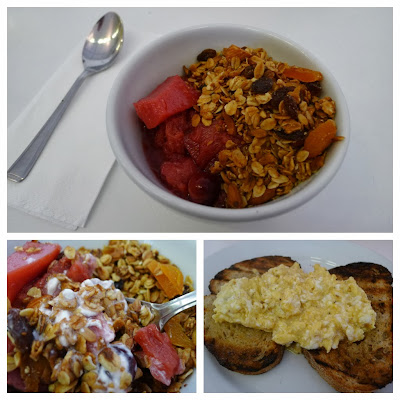 Housed in a converted bike shed in playground of the former Victorian Rochelle School on Arnold Circus, Rochelle Canteen is run by Melanie Arnold and Margot Henderson (aka Mrs. St. John). Like hubby’s St. Johns, the menu is simple, follows the nose to tail ethos and changes daily.  I wanted the eggs so did my wife; so I had the granola. From now on, I will always have the granola… ‘twas good! 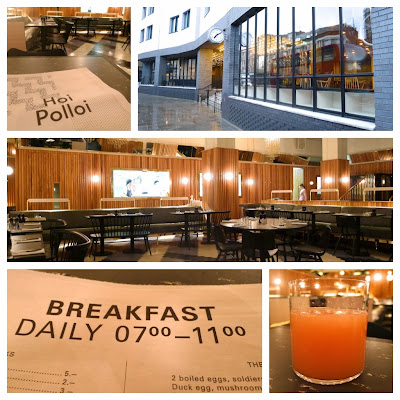 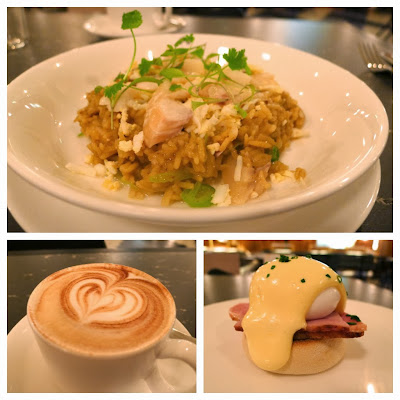 Bistrotheque’s new brasserie in Shoreditch’s new Ace Hotel, Hoi Polloi, has a great all day menu with some excellent breakfast choices. The Kedgeree had a real spicy kick, generous flakes of fish and grated egg. The soundtrack was hip too! (Also: freshly squozen juices, good coffee and Eggs Benedict) 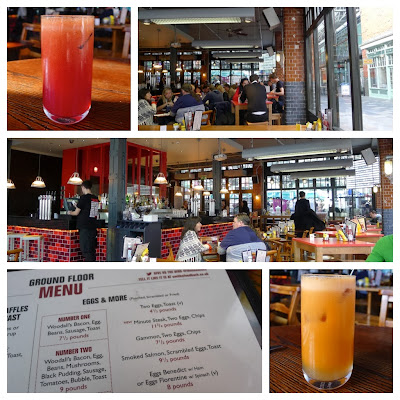 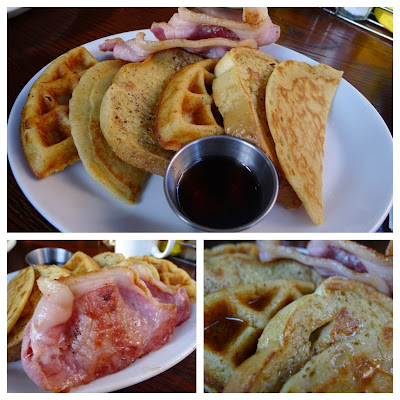 Smiths of Smithfield was formerly shouty John Torode’s place but don’t hold that against it. If you like maple syrup but can’t decide whether to have waffles, pancakes or French toast? Why not have all three in the ‘Lumber Jack Stack’ (plus some Woodall’s bacon, obvs!) 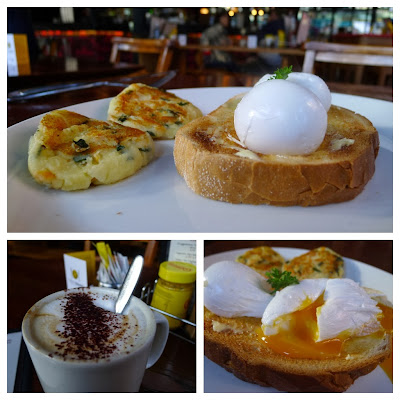 If such greed makes you feel guilty, have an SOS (Beetroot, Carrot, Celery, Apple, Ginger) or Ginger Zinger (Carrot, Ginger, Apple) from the Juice Bar to help rebalance your ying with yer yang. Also: a mug of Cappuccino; Two Poached Eggs on Toast and Bubble. 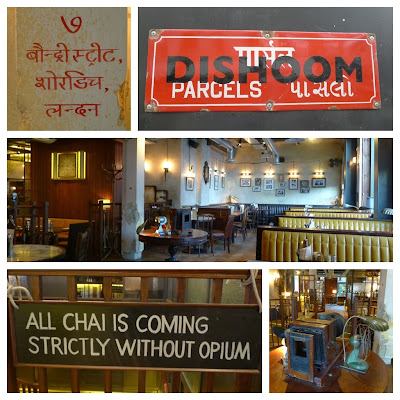 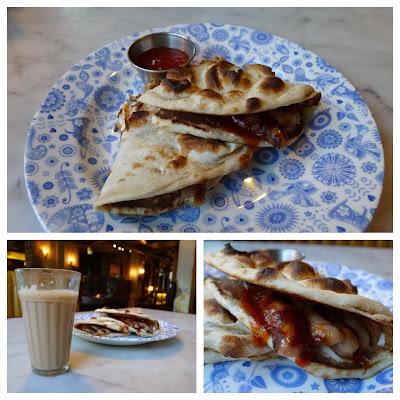 ‘A Bombay Café in London’ Dishoom offers a refreshingly different vibe for breakfast (or any meal for that matter). Who would have thought Cumbrian sausage, chilli tomato jam, cream cheese, coriander and naan bread are a marriage made in heaven? Also: check out the Bacon Naan and Egg Naan on Mrs Petticoat. 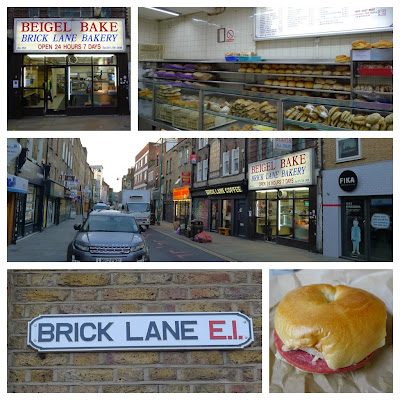 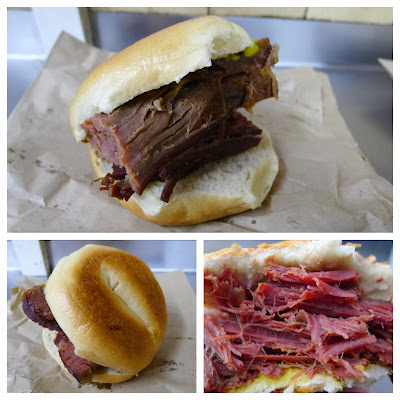 Open 24 hours a day, 7 days a week, serving the same menu for forever, the beigels of Brick Lane are not exclusively a breakfast item… for years they were the only way to sate my post clubbing munchies – a plain beigel was just 10p in those days; they are now an astronomical 25p #inflation (Also: my favourite for 20 years, a Salami Beigel) 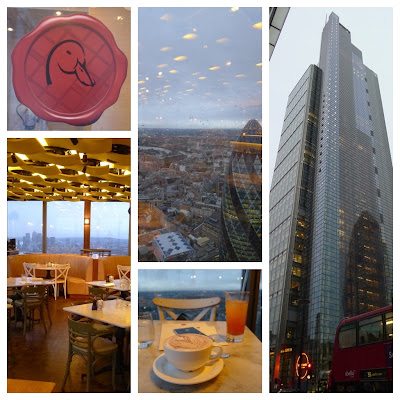 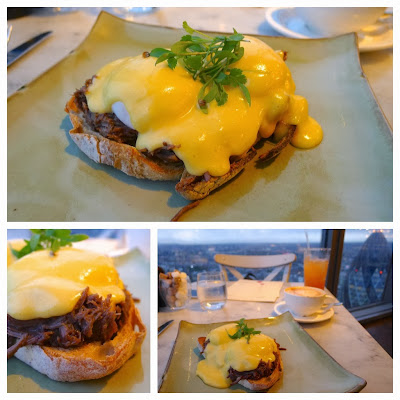 Located on the 40th floor of the Heron Tower, like Beigel Bake, Duck & Waffle is also open 24/7 (although their clientele is no doubt a little less representative of the East End’s underbelly). The views too are a little more impressive. More impressive than even the views… braised ox cheek, charred sourdough, perfectly poached eggs and hollandaise.

Email ThisBlogThis!Share to TwitterShare to FacebookShare to Pinterest
Labels: A Beginner’s Guide To..., Fergus Henderson, London