* Shinji was awarded a Michelin Star in 2016

Serving Edomae-style sushi, Shinji by Kanesaka at the Raffles Hotel, is considered one of the finest restaurants of its type outside of Japan. 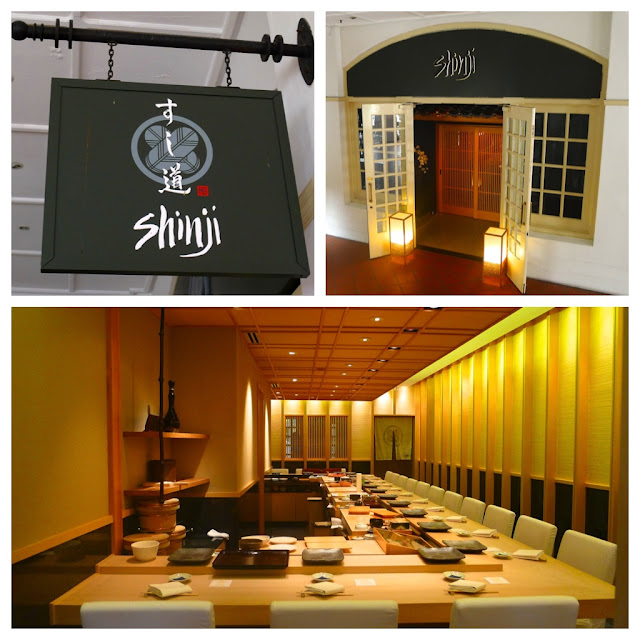 Four times a week, fish and seafood fresh from the waters of Tokyo Bay are shipped from Tsukiji Market where they are expertly prepared by master chef Koichiro Oshino and his team. 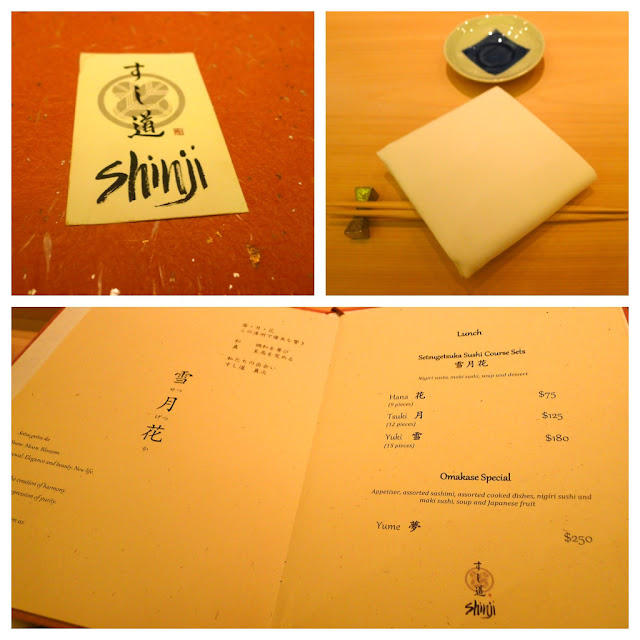 This was our second visit and was enough to confirm Shinji as one of my favourite places to eat in the world. When I last visited (see here), we enjoyed the 9 piece Hana Omakase; this time, we skipped the 12 piece Tsuki and went for the 15 piece Yuki (with soup and dessert). 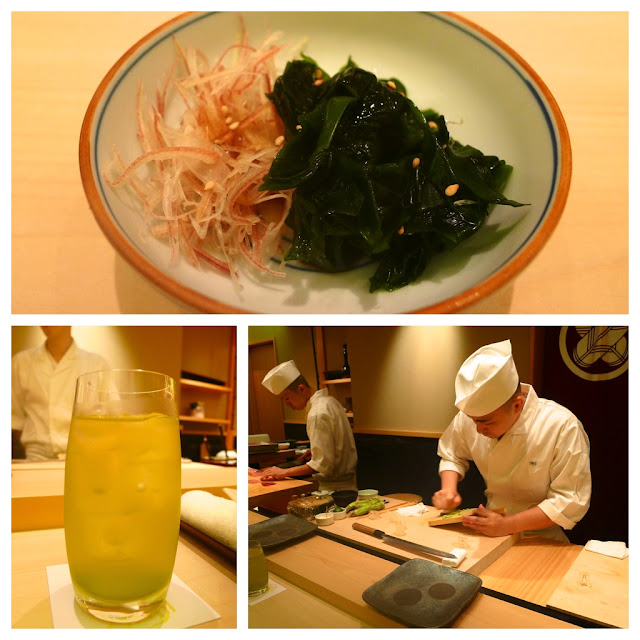 As previously, the meal started with a bowl of finely prepared, Seaweed and ginger with soy and sesame. The seaweed is fresh and delicate, As the chef prepared each piece of sushi and places them in front of the diner he said the name of the fish in Japanese and English. I noted that this one was called ‘Laser Fish’. Not knowing what it was at the time, I thought I’d look it up later, but I cannot find what this fish may have been. It tasted somewhere between Suzuki (sea bass) and Tai (snapper). 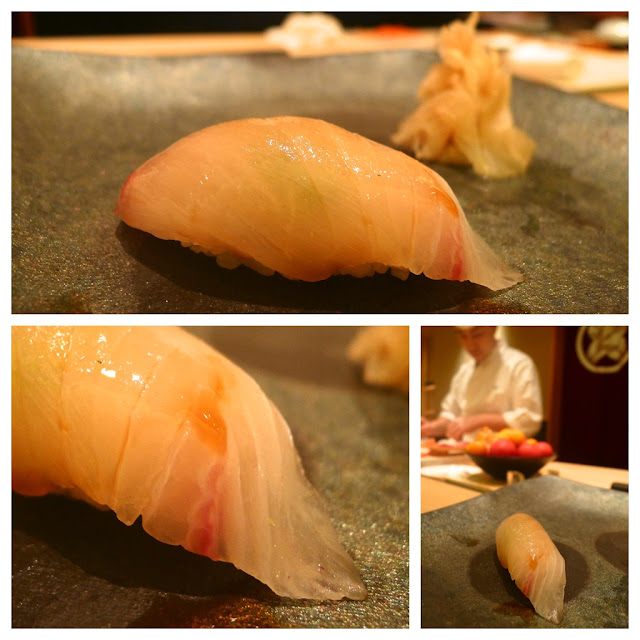 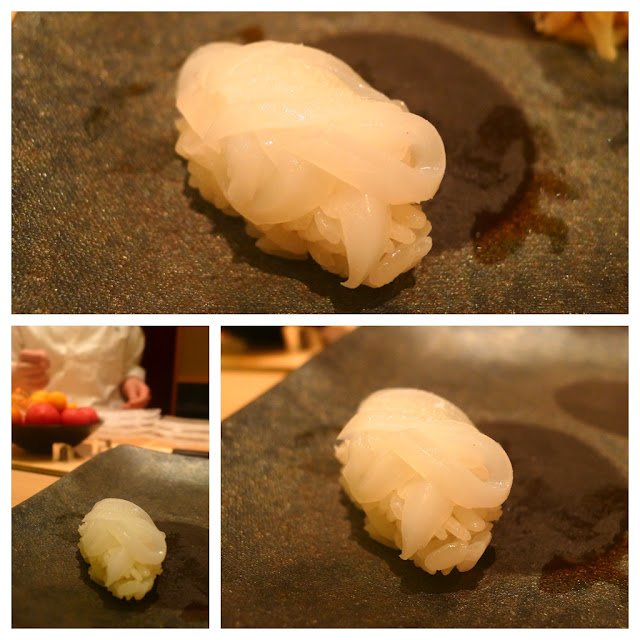 Ika (Squid) at Shinji, the squid is cut into an almost translucent slither before being cut into fine strips (this, I assume helps to reduce any chewiness) and kissed with a little lime juice lime for a fresh lick. Akagai (Ark Shell) with its orangey pink hue and butterflied presentation, I think the ‘red clam’ is one of the most attractive of sushi. It has a firm texture and deep flavour. 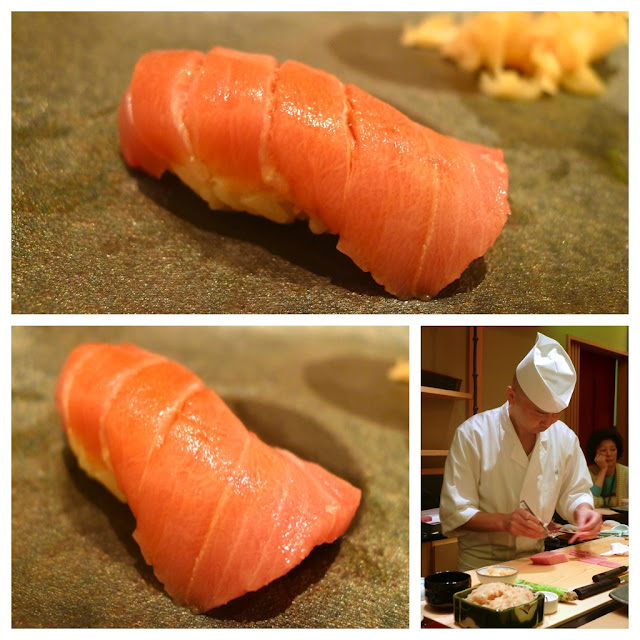 Chutoro (Medium Toro) cut from the upper belly section of the tuna, this ‘medium fatty’ piece of fish serves as an interesting contrast to the fatty tuna that followed. 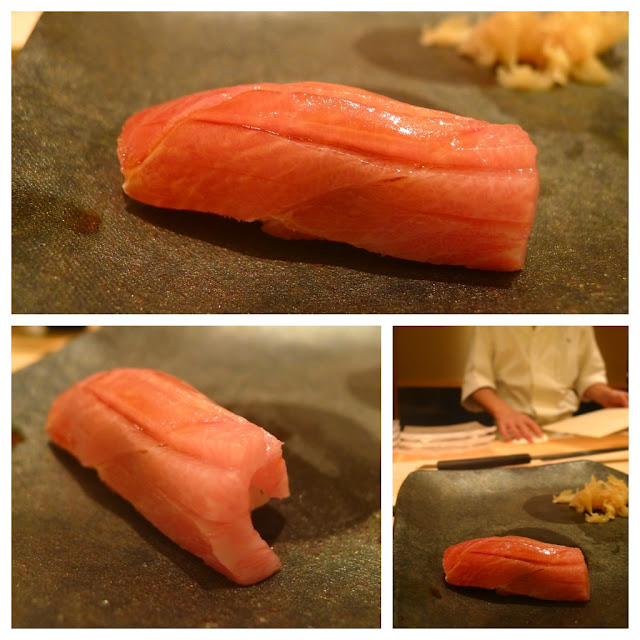 Otoro (Big Toro) cut from the lowest proportion of the tuna belly, the supremely fatty ‘otroro’ is the Rolls Royce of the tuna world. It’s this cut that can command exorbitantly high prices at Tsukiji Market when the quality is high and the day’s catch has been poor. One taste of the indulgently rich, melt in the mouth, tuna and you can see why. 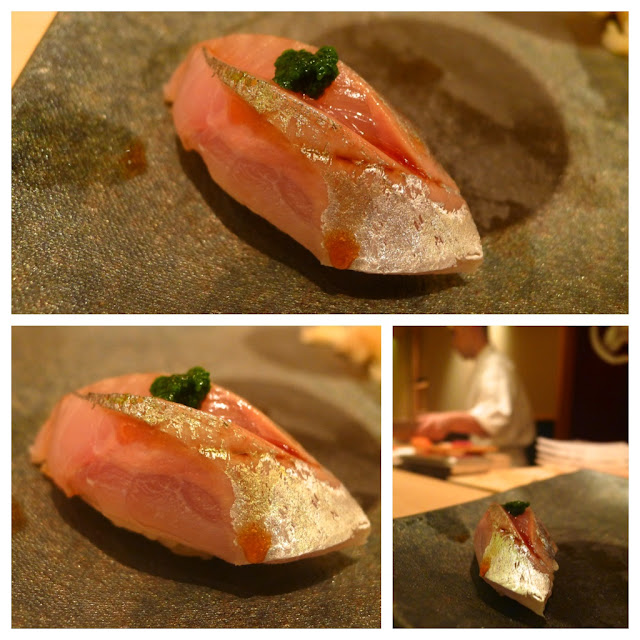 Aji (Horse Mackerel) after the expensive treat of the otoro and its amazing texture, we were treated to the much more economical Aji; although, when it comes to flavour, this fish is truly well-heeled. To cut through the oiliness, grated ginger, citrus or, as in this case, spring onion is often added to bring out its sweetness. Maguro Zuke (Marinated Tuna) a firm fleshed, non-fatty section of Blue fin tuna ‘zuke’ refers to its having been marinated in soy. It’s one of the most traditional ‘neta’ (toppings) in Edo style sushi. 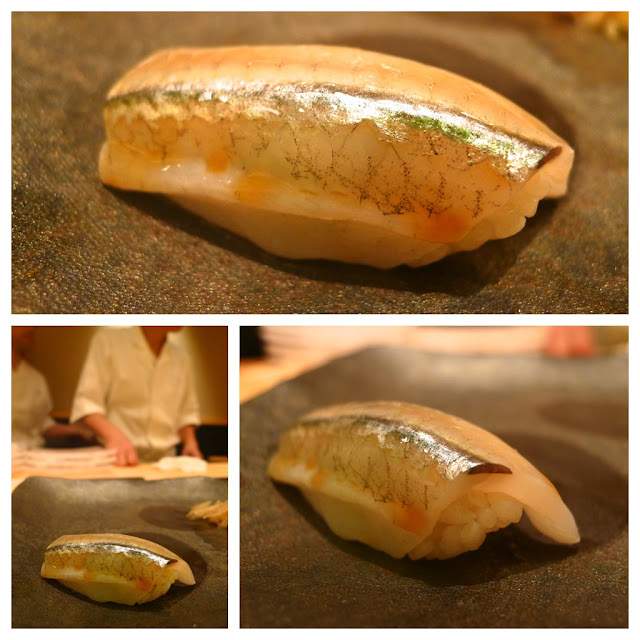 Sayori (Japanese Halfbeak) this was my first taste of ‘Needle Fish’ – it’s an elegant fish with a delicate texture and clean fresh taste, lifted by a slight caress of soy. 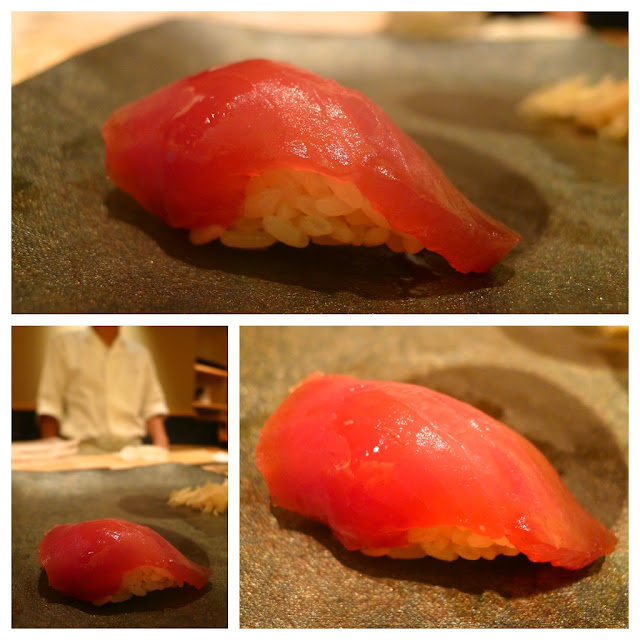 Katsuo (Bonito) reputedly a favourite the Samurai, like maguro, bonito is an example of akami (red fish meat) and another traditional ‘tane’ (neta) from the Edo period. A seasonal speciality, Bonito has different tastes at throughout the year (shun no aji) as the amount of oil and fat will depend on water temperatures and alike. 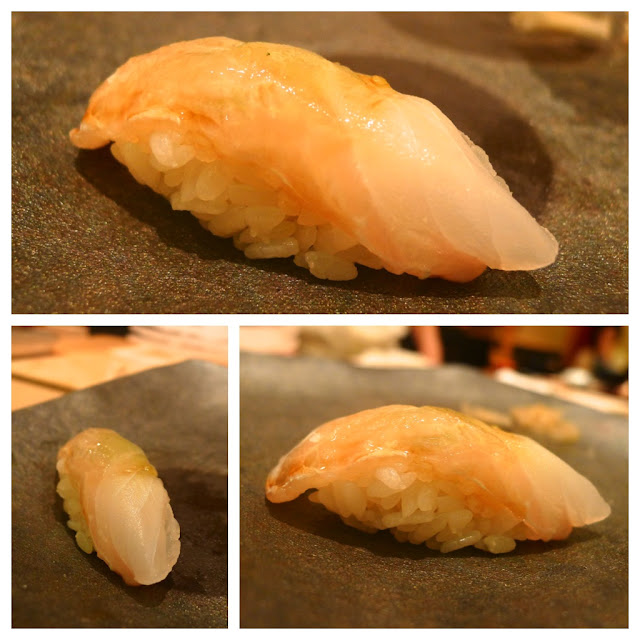 Karei (Flounder) a light, sweet meat with a surprising amount of umami. 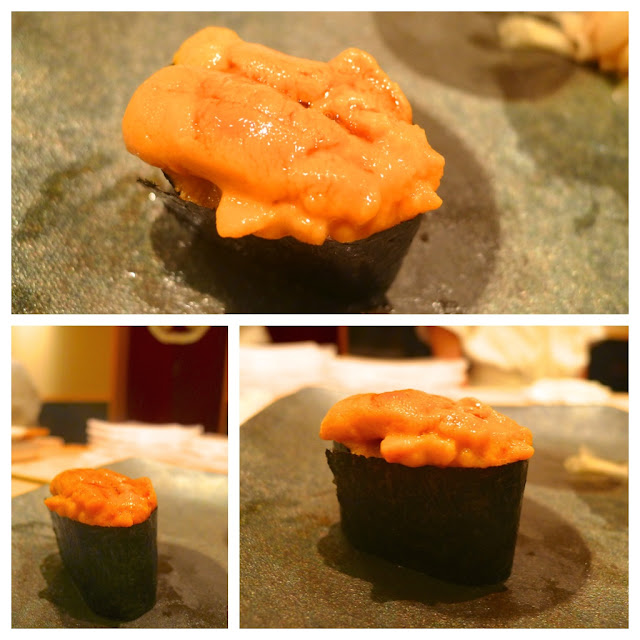 Uni (Sea Urchin Gonads) one of the most prized delicacies in Japanese cuisine. From my experience, its quality and flavour can vary wildly but when you get ‘the good stuff’, not a lot can match it – a sensuous creamy texture which melts on the tongue, leaving behind the essence of the ocean. 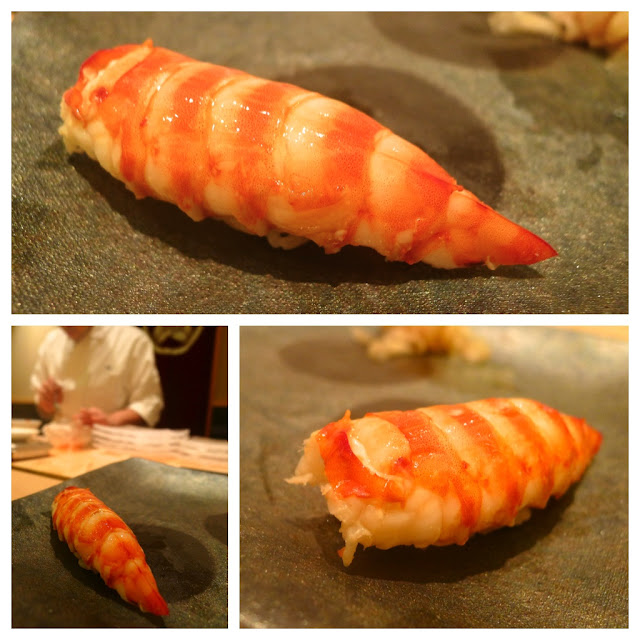 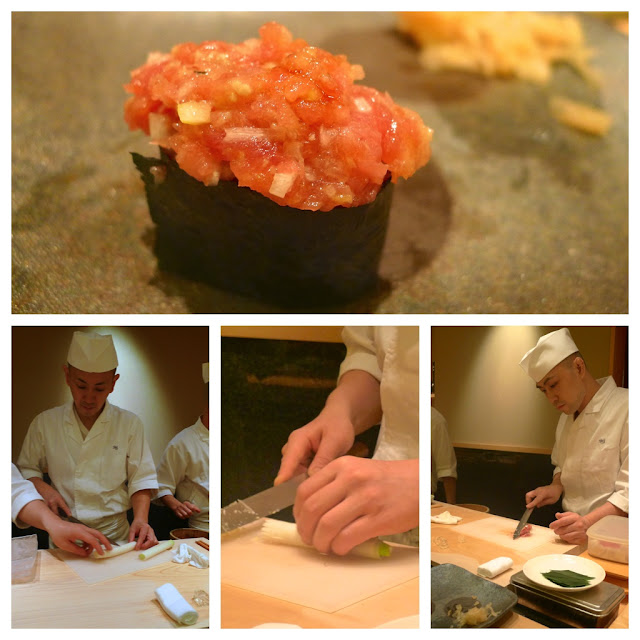 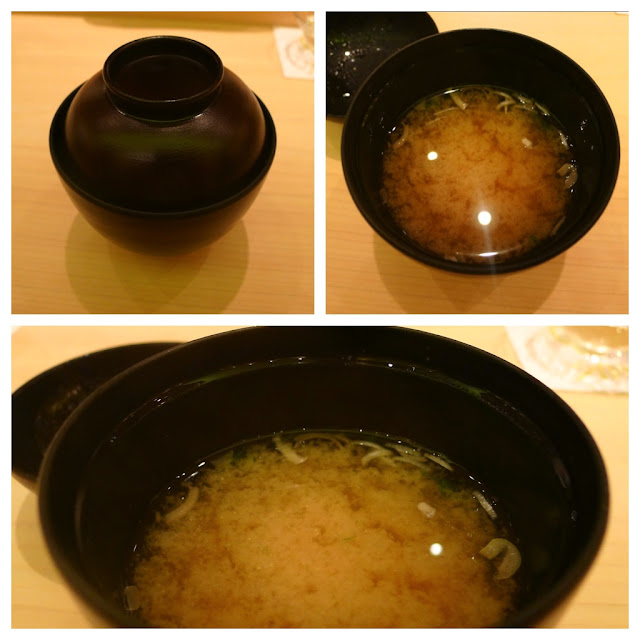 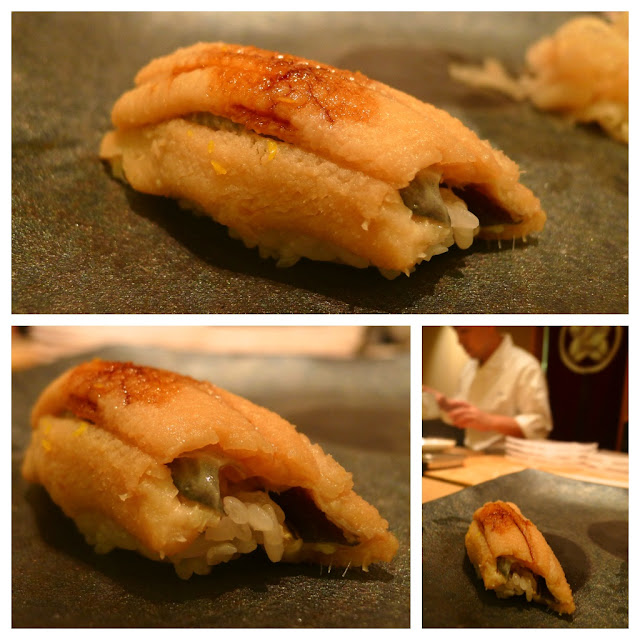 Anago (Conger Eel) due to its abundance in Tokyo Bay (formerly Edo Bay) during the Edo period, Anago was one of the earliest fish to be used as a ‘nimono-dane’ (cooked or simmered tane). After poaching it has a loose, fragile texture with a subtle, sweet taste. It was topped with a little yuzu zest and a ‘tsume’ reduction, made from the poaching liquor. 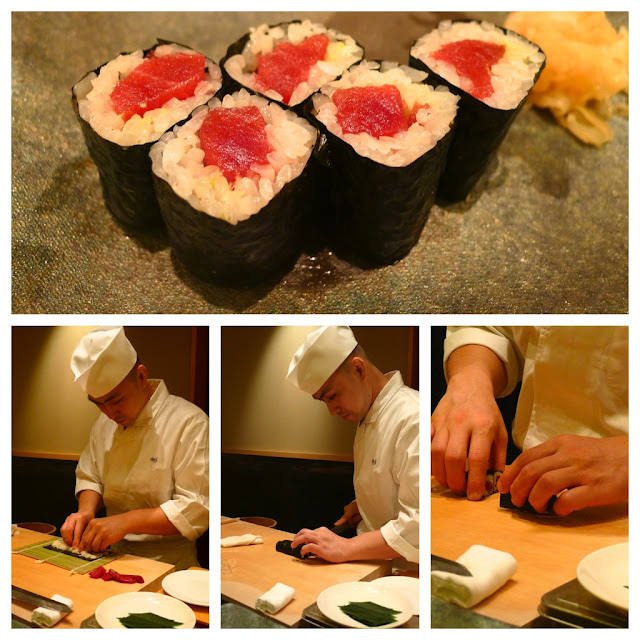 Tekka Maki is a type of hosomaki (thin roll with a single). Tekka, meaning “flaming steel”, refers to the red colour of the maguro ‘gu’ (filling). 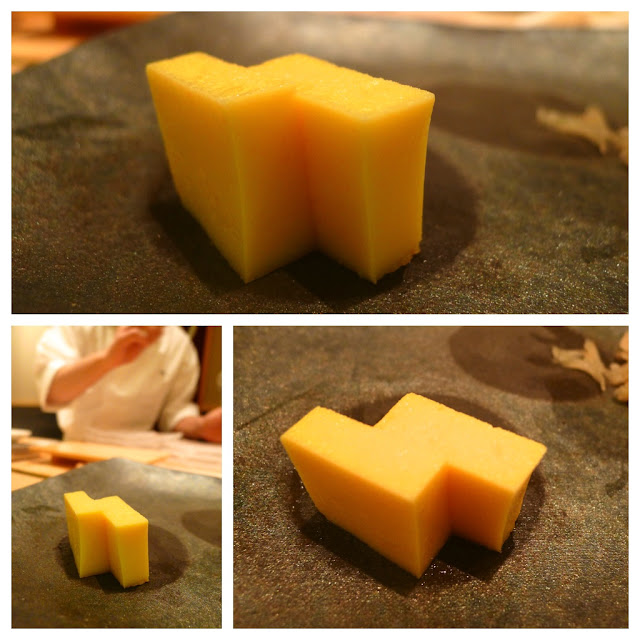 Tamago a silky smooth sweet egg and prawn paste ‘omelette’ that I’m told takes an hour to prepare each day. 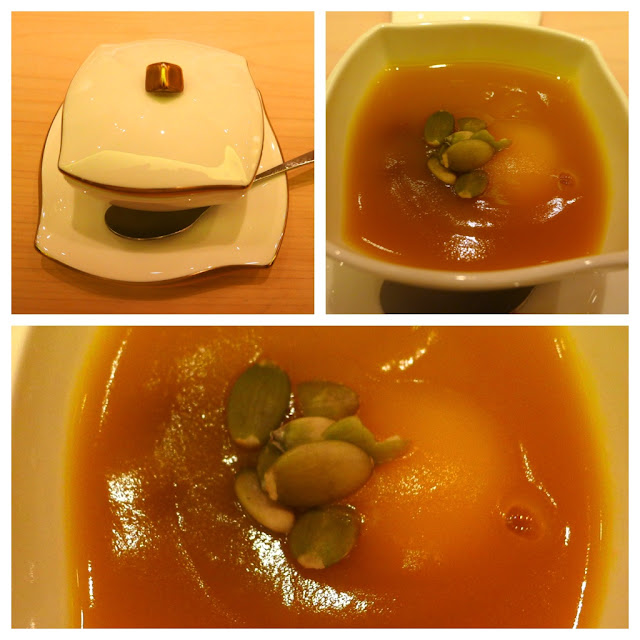 We drank Tengumai ‘Junmai-shu’ Sake from the Ishikawa Prefecture. Made using the rare traditional methods of ‘Yamahai-jikomi’ by seventh generation of brewers at the Shata Shuzo Brewery (founded in 1832). We also drank an Akamaou Shochu (Red Sweet Potato Spirit). 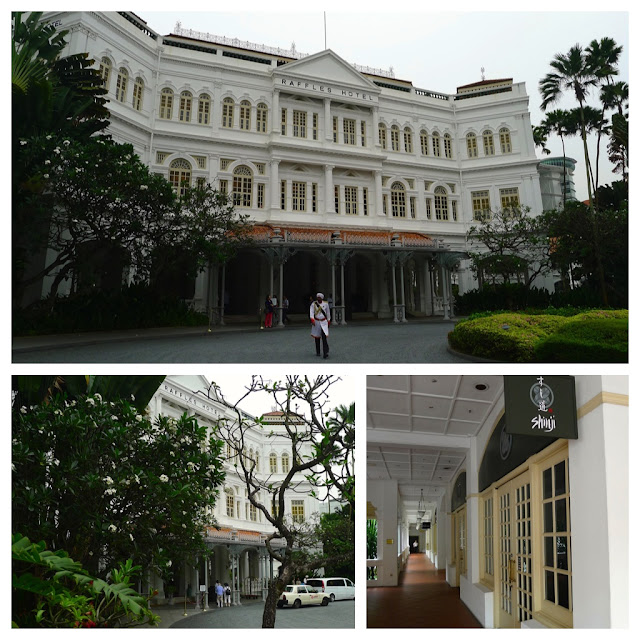 Shinji by Kanesaka as recently been voted as the 32nd best restaurant in Asia by Asia’s 50 Best (here).