The Garden by Simon Radley at Oddfellows, Chester

Located on Lower Bridge Street, ‘Oddfellows Hall’ is a building with a rich history as a private house, a school, offices, shops and of course, as the meeting hall of the Oddfellows’ Friendly Society – nowadays, its dapple-grey neo-classical façade gives little hint to the quirky, colourful interior and ornamented baroque decoration found within. 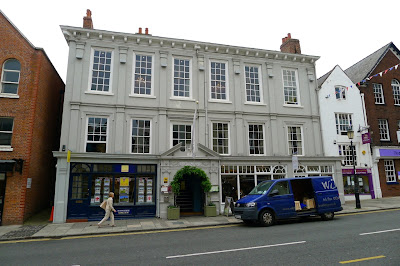 Since becoming a boutique hotel and restaurant a few years ago there have been a few changes to both the chefs and the menus at Oddfellows; including some hoo-ha when Michelin accused the owners of “misleading” customers by claiming ‘Michelin starred’ chef Richard Phillips was in charge of the kitchens at a time when he did not hold a star. 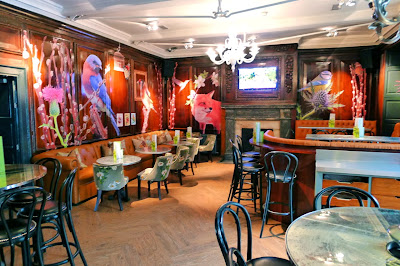 Fortunately, that is now all behind them as Oddfellows have recently reopened as ‘The Garden by Simon Radley’ - a chef who does currently posses a Michelin star, a couple of hundred yards away, at the Chester Grosvenor.

You can read a little about Simon and Chester’s history in my Simon Radley at The Chester Grosvenor post (see here). 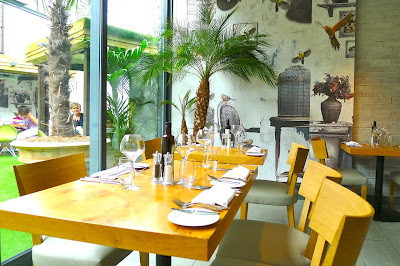 During my recent lunch visit, I appeared to be the only odd fellow present – the rest of the diners seemingly made up from ‘the ladies that lunch’ set: there were several female pairs or groups with just one mixed sex couple and of course, me, the only solo diner. 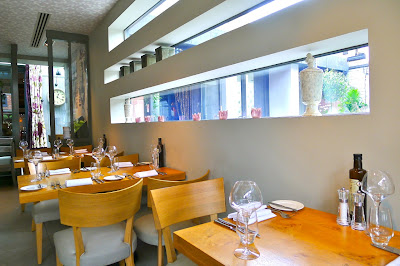 I even ‘recognised’ a famous ‘actress’ having lunch – ‘someone like’ Helen Mirren or Alison Steadman, but not either of those... to be honest, she may have been a newsreader - the point I am making is ‘The Garden’ seems very much the place to be seen in Chester. 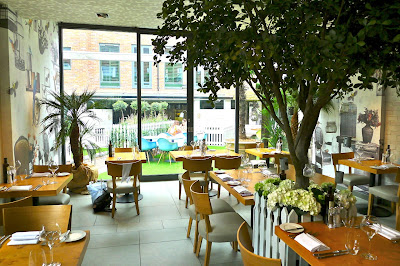 I may have been dining alone but I entertained myself with a game of musical chairs (to a ‘chilltronica’ soundtrack). 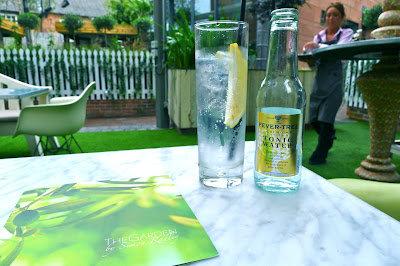 ‘Seat number 1: the conservatory’ - having felt that I made a 'mistake' at The Ledbury when opting to sit outside, I declined the hosts initial offer and took a conservatory seat looking out into the garden. The décor is what I would describe as ‘botanical, lepidopterist and ornithologist quirk’ - I liked it. 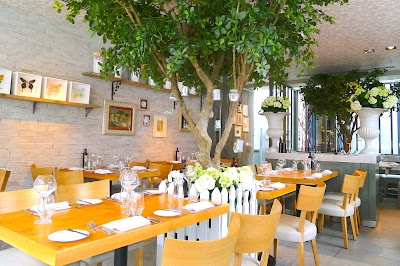 Having ordered a drink, I begun to peruse the menu, which reminded me that the restaurant is called 'The Garden'. I quickly decided then to move to ‘seat number 2: in the Garden’. 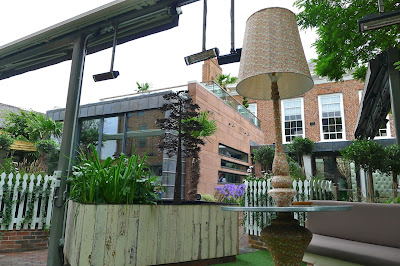 A good choice; especially in light of the recent glum weather as it seemed a shame not to make the most of sunshine that was trying so hard to break through the clouds. 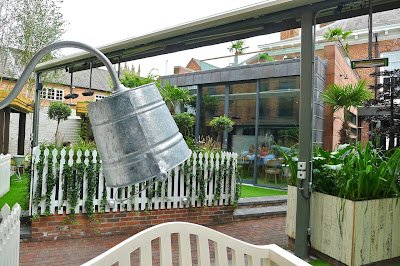 The outside space is as funky as the inside - design features such as: oversized lampshade tables; and galvanized bucket light fittings; gnome seats: AstroTurf, turf and white picket fences all helping to make a well deigned, modern and welcoming space. 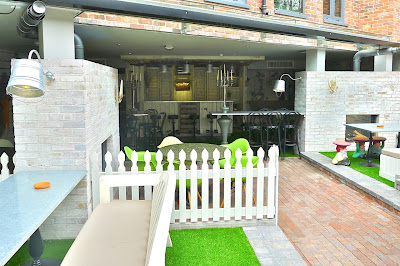 There are a number of secluded areas and private cabins - as inviting as they looked, dining alone, I felt that I shouldn’t take a whole cabin to myself and instead opted for a small table in an exposed patch of ‘grass’. 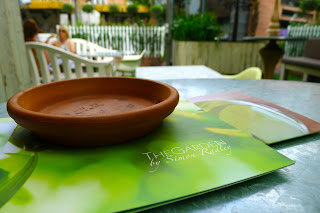 My starter, a Goat’s Cheese Pannacotta promptly arrived… very promptly. I understand that all the components are pre-prepared but at least go through some pretense in the kitchen. The menu description also listed 'fig, shoots and lavender honey'… there was no mention of the mustard in the dressing. 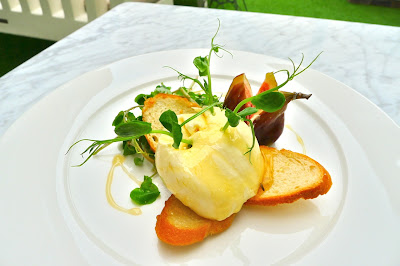 The unannounced mustard, I felt, generally bullied the subtle flavours of fig and cheese. Only with careful loading of my fork with enough of the Pannacotta could I temper its potency but even with this measure, the goats’ cheese was all but lost - a real shame as I deemed the Pannacotta itself to be very good. 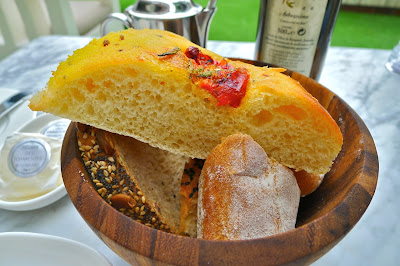 I found the Bread and Oil to be very good. 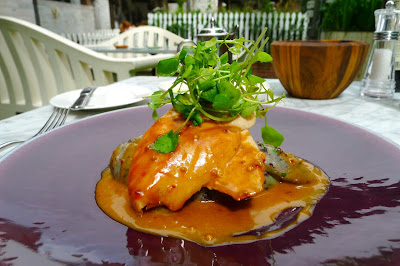 The chicken breast, although not the best and most tasty of qualities was perfectly well cooked and moist. Despite my already high hopes, the ‘mash’ was even better than expected – generously mixed with tasty bites of pearl barley. 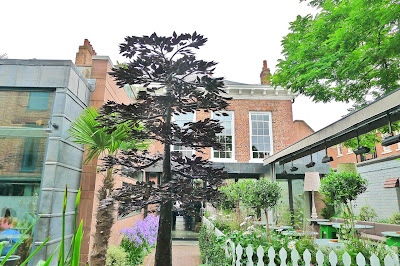 Fittingly for a restaurant called ‘The Garden’, I did notice other diners receiving their chips in dinky terracotta plant pots. It was about this point that I moved to ‘Seat number 3: in the shade’ - having spent the previous three days cutting a large hawthorn hedge that borders my property, I had already started to burn on the back of my neck, so when the sun eventually won its ongoing battle with the clouds the shady spot was welcomed. 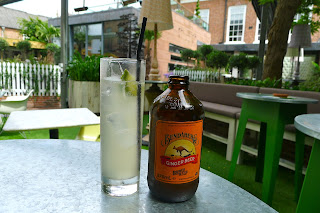 For ‘afters’, I was initially torn between the Sticky Toffee Pudding with Butterscotch Sauce and the “Strawberry” Eton Mess. Selecting the summery option there followed an incredibly long wait… you'd have thought it was a soufflé. 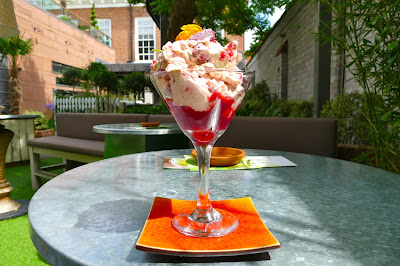 Eventually, an impressive looking ‘mess’ arrived, garnished with a Nasturtium Flower and Pâte de Fruit. I took a spoonful and it was delicious… it was smooth, it was creamy, it was studded with crunchy and chewy meringue… it was raspberry!
Not a problem – I like raspberries; in fact I prefer them to strawberries but I know some (my wife, for one) would have been disappointed with the surprise switch of one fruit for another.

My few gripes aside… I liked Oddfellows and will definitely go back.