If I were to begin to describe a country with the words ‘small’ and ‘mountainous’, then Wales would be a pretty good first guess.

If I were to go on to describe the land as ‘permanently rainy’, you may think I was being a little harsh (even with the recent weather).

What if I told you this place has ‘rain mines’ and that the ‘exceptionally wet rain’ is the country’s main export?

At this point, fans of Terry Pratchett’s Discworld series may recognise that I am referring to the fictional land of Llamedos – an obvious parody, which closely resembles Wales and the Welsh.

Llamedos reads ‘Sod 'em all’ when spelled backwards; Pratchett apparently took inspiration for this from Dylan Thomas’ play ‘Under Milk Wood’ which featured the equally fictitious Welsh town of Llareggub (‘bugger all’ in reverse). 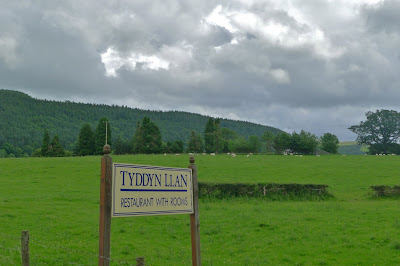 On a Saturday lunchtime, with bugger all to do thanks to the unending rain, my wife and I decided to drive to Wales to visit Tyddyn Llan – a Michelin starred restaurant in the very real and entirely non-fictitious town of Llandrillo. 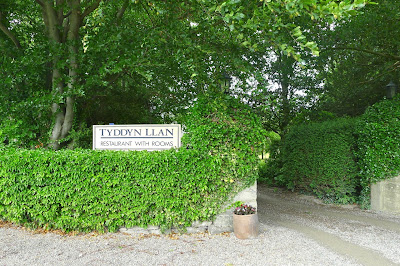 Set in a typically scenic and verdant location in the valleys on the edge of Snowdonia, Tyddyn Llan is a restaurant with rooms, run by Chef Brian Webb and his convivial wife, Susan. 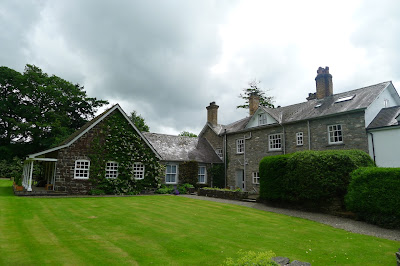 The Georgian country house is decorated in keeping with the style expected. The lawns were beautifully manicured with neatly trimmed hedges and full flowerbeds – we would love to return for a weekend break; I know my wife would be happy sat by the pond with her Kindle whilst I could go off yomping.

The large welcoming lounge areas had a relaxed homely feel; this comes in part from being surrounded by Brian and Susan’s many personal collections of books, ornaments and curios collected on their travels. A glass display case is crammed full of Harrods’ Bears but it was the ashtrays and matchboxes from some of the world’s finest restaurants that peaked my interest. 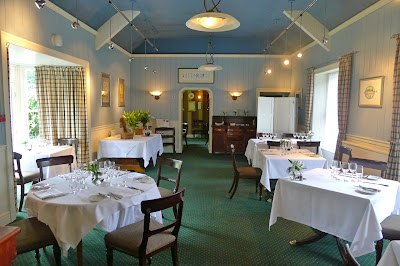 With regards to the food, it would be too easy to start to compare Tyddlyn Llan with other one-starred restaurants that I have been to and comment on how the food is not as progressive or artistically presented as most - I could envisage that a more critical eye may call the, largely classical, food ‘dated’ and even ‘unimaginative’.

For me, it is important to remember though that although Brian does not seemingly follow the latest food trends, techniques or flourishes on his plates, instead, flavours and quality ingredients, coming, in the main, from the finest local sources are treated respectfully and allowed to speak for themselves. 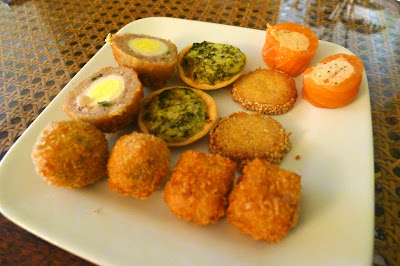 One local foodstuff that I was glad to see on the menu was ‘Welshman's caviar’ laverbread – albeit just a small taster set into crisp pastry tartlets on the platter of welcoming canapés. The platter also featured cheese ham croquetas, fish cakes, Parmesan biscuits; smoked salmon and dill mousses and dinky quail’s egg ‘scotch egg’ (with a disappointingly set yolk)… They may have looked like a plate of beige food that would be advertised by Kerry Katona but each morsel was well cooked (bar the yolk) and tasty. 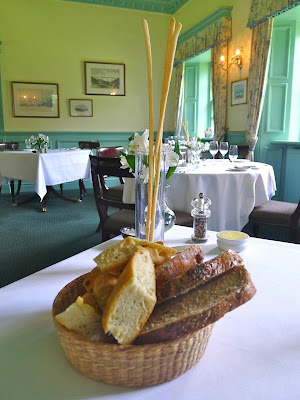 The breads at the table were all homemade and particularly good – especially the date and hazelnut and the two foot long grissini. 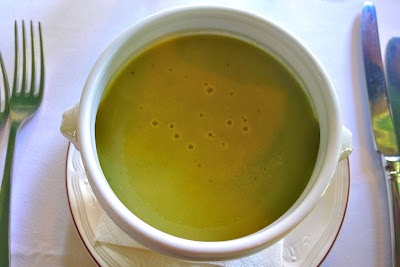 Uncharacteristically, I chose to start with the soup; an Asparagus Soup. This was a wise choice: it was served piping hot and tasted wonderful – exactly what it said on the tin! (No, I am not suggesting it came from a tin… I’m guessing it came from *Claremont Farm). 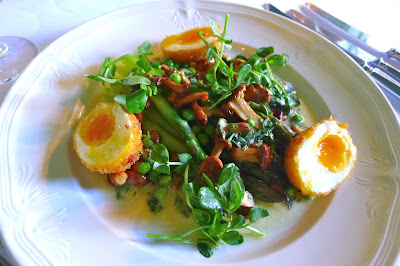 My wife selected the other asparagus dish on the menu, Claremont Farm Asparagus with Girolles, Herb Butter, Pea Shoots and Crisp Egg – despite the fact that my soup was so good, I was still a little envious of this dish; a generous portion with the most delightful herb butter.

One criticism is that we had asked specifically for our next two ‘starters’ to be served as a second course, before the main – inexplicably the kitchen decided to ignore this request and sent them at the same time as the asparagus dishes. This was not a major problem as my soup was hot enough to leave to eat second and my wife too decided to eat her salad first but the table was at this point full with four large plates and it was all a bit overwhelming. 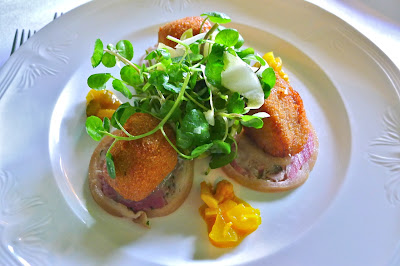 The food however, was good… well, my Crubeens with Piccalilli and Wirral Watercress Salad was. The pig’s trotter ballotine was great but it was the meat inside the breadcrumb crust that made this dish exceptional - wonderfully rich and flavoursome. The piccalilli was also very good: I’ve developed a new found love for piccalilli recently after having more great examples at The Parkers Arms (see here) and Aiden Byrne’s The Church Green. 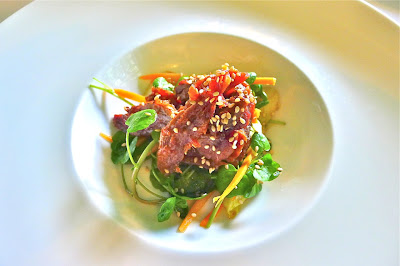 We felt that my wife’s Crisp Goosnargh Duck Confit with Watercress Salad was a tasty enough, yet strange little dish for a Michelin starred restaurant of this type. The heavy Asian influence was not mentioned on the menu description and seemed out of place, in terms of conception and even execution, amongst the other dishes we ate. 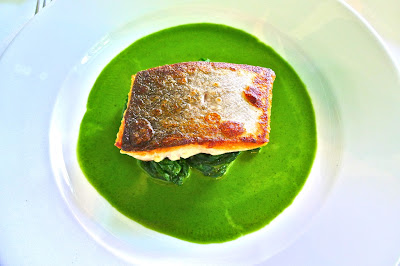 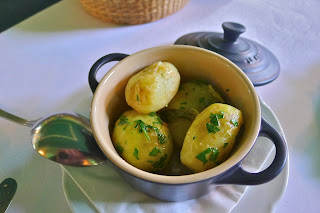 For my main, I selected Wild Sewin with Watercress Salad – the sea trout (sewin) was a little ‘over done’ for my taste but had good flavour; similarly, the accompanying ‘salad’ (sauce in my book) had also developed a skin – my guess is they had both been sat under the pass lights for a little too long. 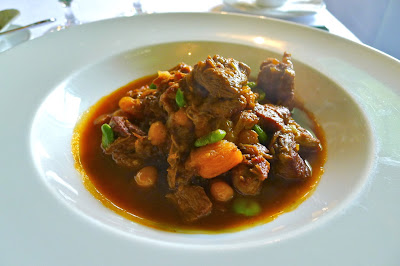 My wife’s Braised Moroccan Style Lamb (if again, a little oddly placed on the menu) was one of the best Moroccan dishes I have tasted, even when in Morocco! It had a superb spicy kick – in fact too spicy for my wife, which meant that I got to finish it off… result! 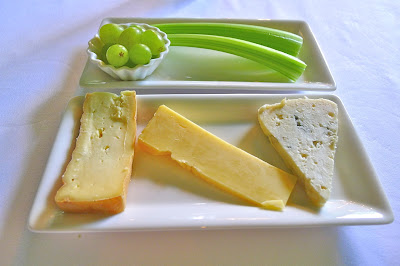 To finish my wife selected the Cheese plate. Which I think included a Ardahan, Per Las and a Keens Cheddar – sorry, I didn’t take any notes but suffice to say, they were three quality cheeses. 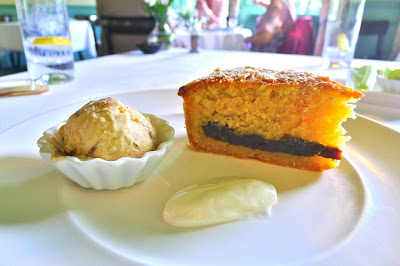 I ended with a top notch Prune and Almond Tart. 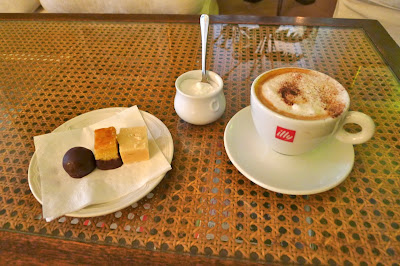 We decided to take the coffee and petit fours back in the lounge. Spotting a bit of sun finally breaking through the rain clouds, I downed and gobbled these and left my wife to pay as I went outside to snap a few pics to try and capture Tyddyn Llan in its best light and prove that Wales is not ‘permanently rainy’. 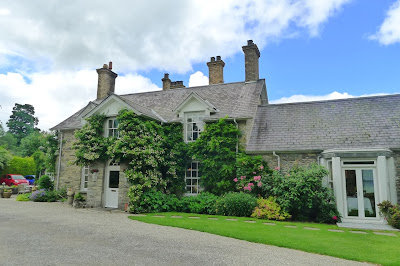 All in all, Tyddyn Llan is a wonderful destination and seems to be prefect place to stay in the area for generous and friendly hospitality with great food.