What does The Mark Addy’s rugged Radcliffe-born chef, Robert Owen Brown have in common with Red Magazine, the ‘must have’ monthly for ‘real women who lead real lives’? 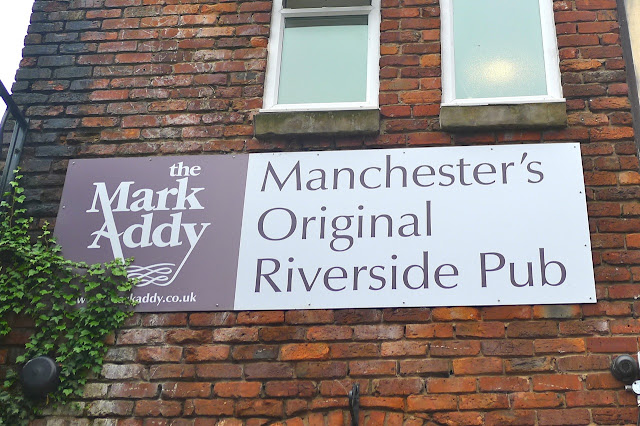 Give up? Perhaps the only think you could think of was Robert’s distinctive curly red mop? Like me, I’m sure the only time Owen-Brown would consider picking up the ‘luxury women's lifestyle magazine’ Red would be if there was a pile of them in a dentist’s waiting room (or some such place) and only then, if there was a mention of food on the cover.

The reason I mention Red then, is because I was recently asked to contribute a one-line restaurant recommendation for the ‘Ask a local’ feature of an article one of their writers is putting together about Manchester.

My first thought was to recommend somewhere in Manchester’s famous Chinatown, such as Red Chilli or the excellent, little Japanese place, Yuzu. Then I considered somewhere in the urbanite Northern Quarter - perhaps its eponymous TNQ restaurant, Teacup on Thomas Street or even the soon to be opened SoLita (South of Little Italy). I thought too about representing Manchester’s gay and lesbian community with an endorsement for the charming Richmond Tearooms.

Then again; what about the one time preeminent French at the Midland? What is it the readership of Red would want? Surely the slick, Second Floor at Harvey Nicks and San Carlo Cicchetti at House of Fraser, with their quality food and convenient shopping locations would be popular choices with Red readers? (The city’s historical Italian connection with the latter also adding a bit of ‘Ask a local’ flavour.) 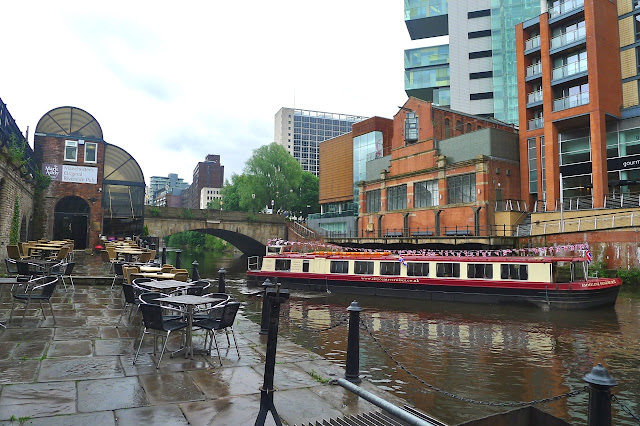 No, instead I decided to give my one line recommendation to The Mark Addy. 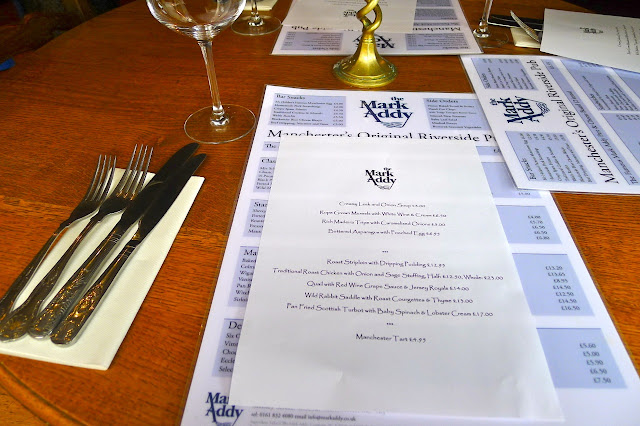 Granted, it may not be the most idyllic of food venues for the ‘ladies that lunch’ as it is perhaps more fitting with ‘people who crunch’ (on pork scratchings, pan fried sweetbreads, devilled whitebait and, of course, Mr. Holden’s panko breadcrumb encrusted, Manchester Eggs) but, I believe The Mark Addy represents the city well. 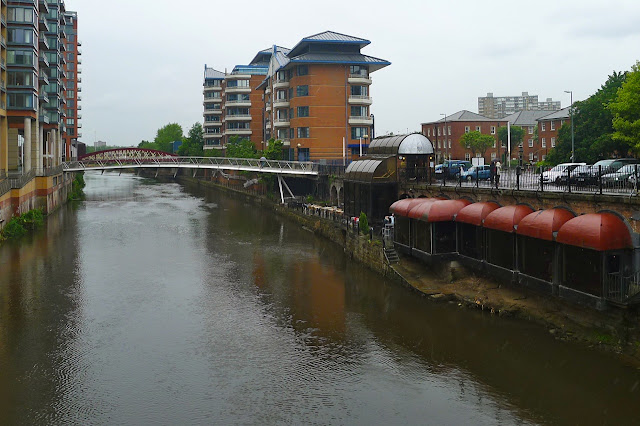 Manchester stalwart Robert Owen Brown is a long time champion of local and regional produce. There are historical connections too that make the Addy popular with visitors and locals alike. The location on the banks of the River Irwell is reminiscent of Manchester’s industrial past. 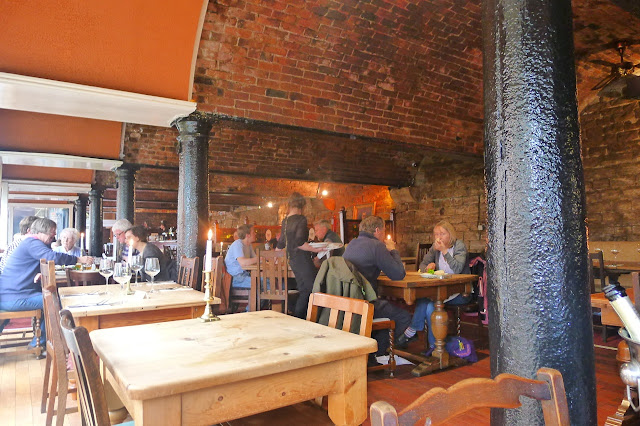 Admittedly, some do see the venue and its location as a little grotty and grim but its better to think of it as Northern, gritty and gutsy; much like the nineteenth century publican from whom The Mark Addy takes its name - a champion oarsman, honoured with an Albert Medal for rescuing upwards of 50 people from the river. 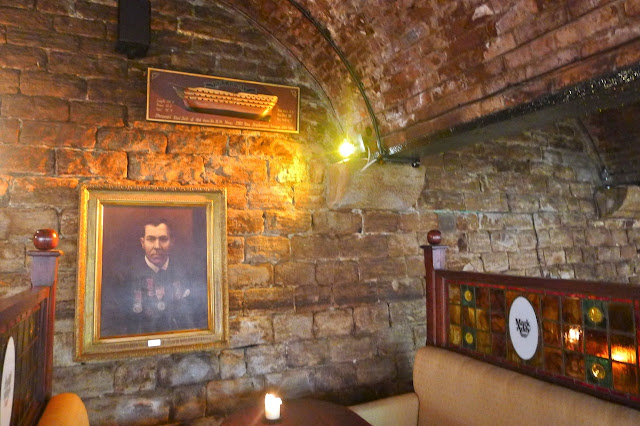 The pub is certainly a ‘no frills’ establishment – if you want glitz and glamour, there are plenty of other places in the city (some mentioned above) but if you want hearty, ‘home-style’ fayre served up in generous portions, then the riverside location is perfect (even more so on a rare, warm Manchester day.) 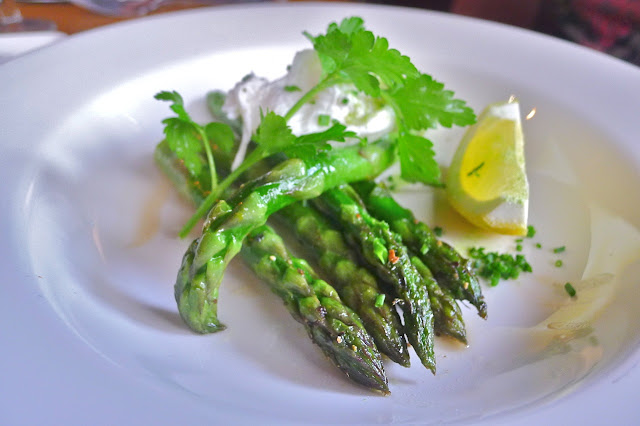 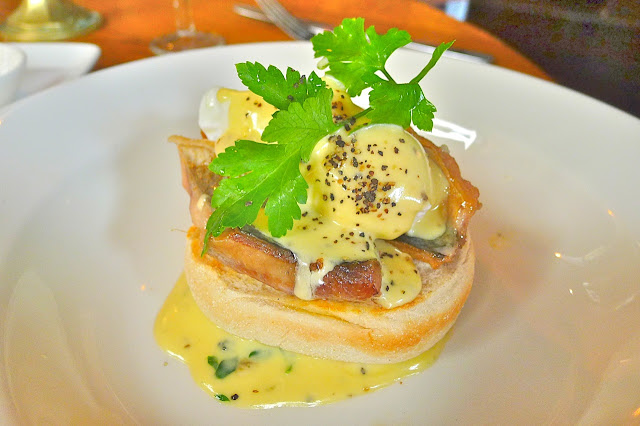 To start, we (three of us) shared Buttered Asparagus with Poached Egg, Manx Kipper on a Muffin with Blue Cheese & Runny Egg and Roasted Bone Marrow with Parsley & Caper Salad. 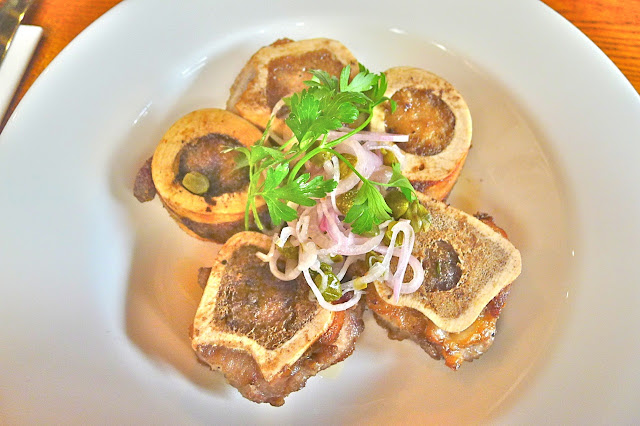 Each and every component was well cooked and flavoursome - the marrow with the caper salad, my personal favourite. 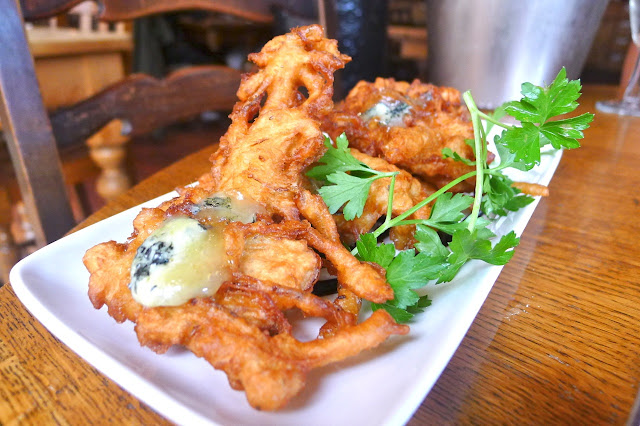 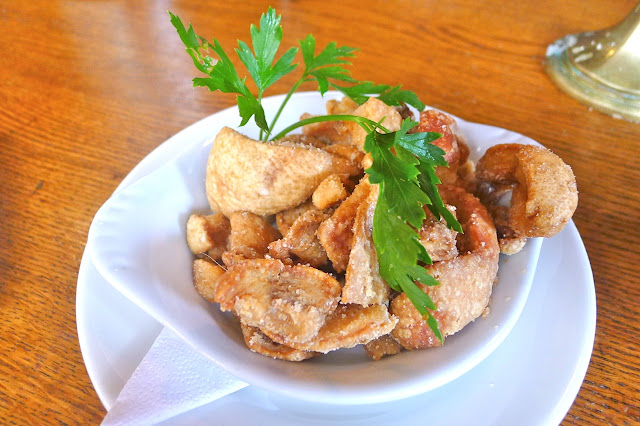 To accompany our starters, we selected a couple of ‘Bar Snacks’ – the Homemade Pork Scratchings were good and the Blacksticks Blue Cheese Bhajis, excellent – although a little more of the tangy Lancashire blue cheese would have been most welcome. 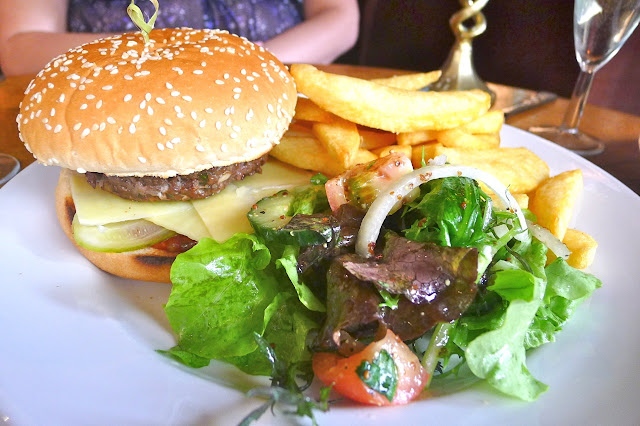 For her main, my stepdaughter selected the ½ Pound Burger with Cheese, Pickle & Salsa – the pickle and salsa were delicious and the salad well dressed with a generous portion of good chips. I found the burger and bun themselves to be no better than average – burgers are seemingly all the rage at the moment and the Mark Addy should be striving to serve one of the best in town. 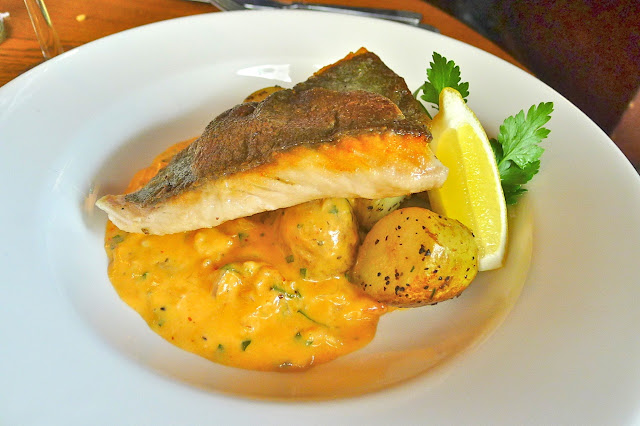 My wife’s Pan Fried Scottish Turbot with Baby Spinach & Lobster Cream was another excellent dish - the fish was well cooked and the rich lobster sauce was to die for. 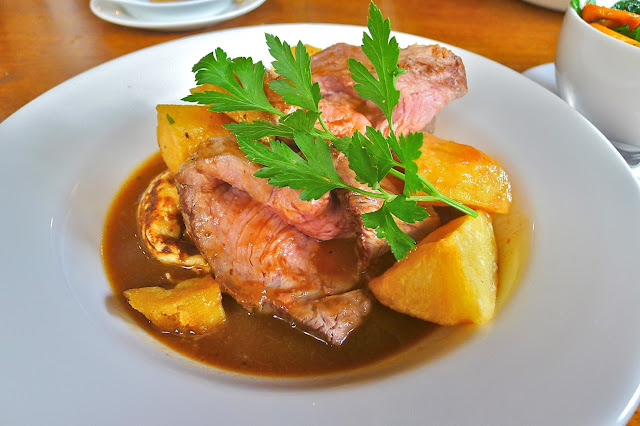 My Roast Strip Loin with Dripping Pudding was divine. I typically try and avoid saying how ‘tender’ the meat was when I write a blog post as it’s a bit of a cop out, but this meat was deliciously tender; there are no other words for it!

Re: ‘Dripping Pudding’ – dripping puds have been cooked in Britain for centuries, predating the more famous offering from over the border. Google tells me, that in 1737 a recipe for 'A dripping pudding' was published in "The Whole Duty of a Woman" and predates, by ten years, the first written recipe for the similar 'Yorkshire pudding' – of course, due to the Wars of the Roses and the ‘friendly’ Lancashire / Yorkshire rivalry that still exists today, no self-respecting Red-rosed chef or restaurant should dream of serving a ‘Yorkie’ Pud! 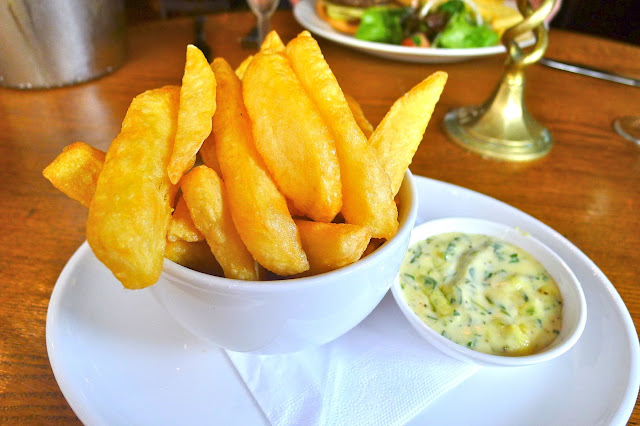 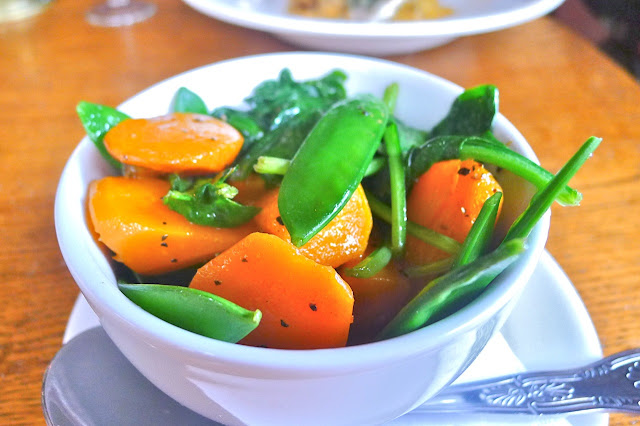 My sides of Hand Cut Chips with Tangy Tarragon Butter Sauce and Seasonal Veg were delicious too - although the huge meat portion (and extra bar snacks) meant that I couldn’t finish them. The butter sauce was exceptional. 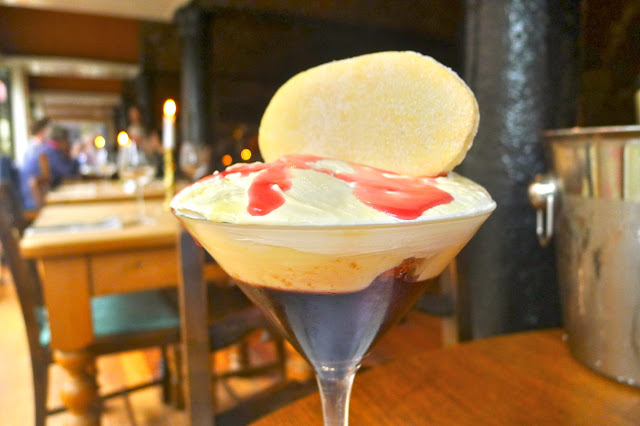 I had been eyeing up the cheese selection, including a Mrs Kirkham’s Lancashire, Mrs. Appleby’s Cheshire and Ribblesdale Goat and, disproving the anti-York stance, a Hawes Smoked Wensleydale but was just too stuffed. My stepdaughter however found room for the Vimto trifle with Bobbies Foot (biscuit) and was suitably impressed. 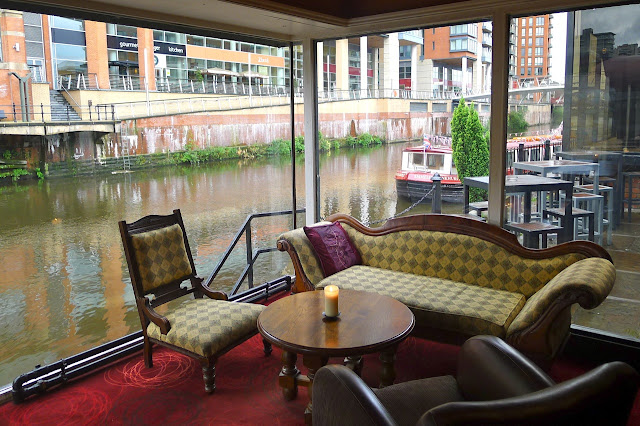 So there we have it, Red Magazine may be for ‘real women who lead real lives’ but my belief is that Robert Owen Brown’s The Mark Addy is perfect for ‘real Northern* folk who love real food’.

*Plus, of course, any visitors (including Yorkshiremen and even Southerners) who want a true taste of the region’s finest.