Please bear with me if you are not a fan of Little Britain… for I am unable to mention Fat Cow without thinking of Matt Lucas’ Marjorie Dawes character berating Fat Pat with the chant, “Fat cow! Fat cow! Fat cow!” 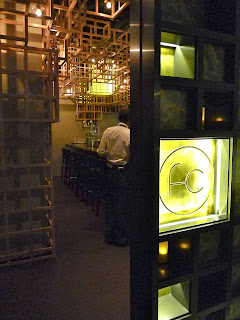 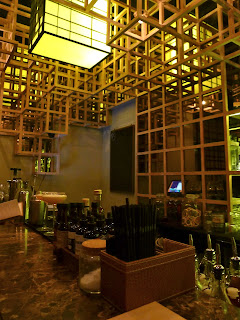 Now that I’ve got that out of my system, I’ll tell you a little about the Singapore’s funkily named Fat Cow restaurant, housed within the somewhat bizarre setting of the Camden Medical Centre. 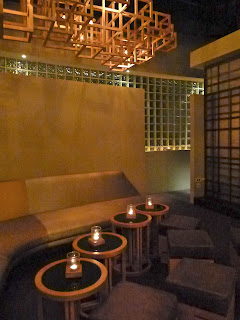 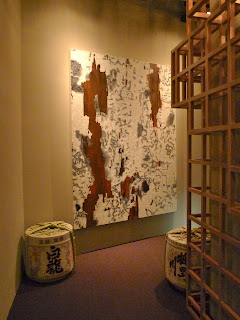 By day, people visit the centre for its menu of cardiology, plastic surgery, ophthalmology, dentistry, physiotherapy, psychiatry and gynaecology… come the evening however, Fat Cow serves up some of the city-state’s finest cocktails, foie gras, sushi, sashimi and, of course, premium beef. 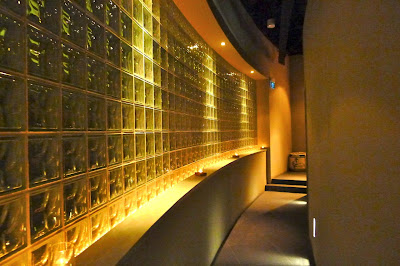 Outwardly the setting may be a little off the wall, inside however Fat Cow is simply stunning. Dramatic features include, the high ceilings with suspended geometric wooden sculptures, evocative of shoji screens; sweeping glass walls leading to the open kitchen with its counter seats (off of which you’ll find various screen off ‘private dining’ areas. 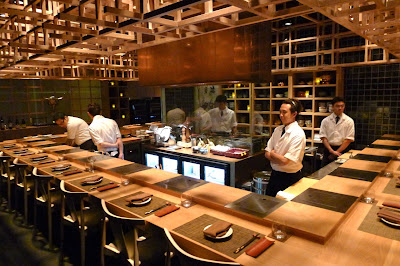 Imposing artworks and komo-taru (saké casks) complete the look - if you happen to be a locations manager, looking for a ‘Yakuza den’ or even Quentin Tarantino looking for somewhere to film Kill Bill 3, you’d be hard pushed to find somewhere that fits the bill more.

Speaking of bills, describing themselves as "Japanese-inspired meat atelier" you know a meal here will not fall into the ‘cheap eats’ category. But you get what you pay for and, as well as the finest ingredients, the staff too come with great pedigree. 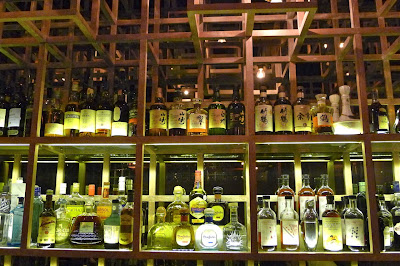 The word ‘mixologist’ gets bandied about all too often these days for anyone with a cocktail shaker, jigger and muddler but Fat Cow’s bar is over seen by Matthew Radajl who, along with the likes of 28 Hong Kong Street’s Michael Callaghan, City Space’s Richard Gillam and, of course, The Cufflink Club’s Joel Fraser is one of Singapore’s finest cocktail architects.

Taking care of the food is, Hong Kong-born Chef Wing Lam who has worked as Sous Chef at the Asian influenced Gordon Ramsay at the London in West Hollywood. 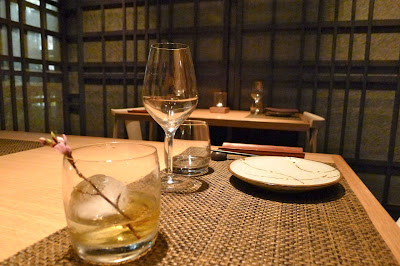 To start we ordered a selection of dishes and sashimi to share: 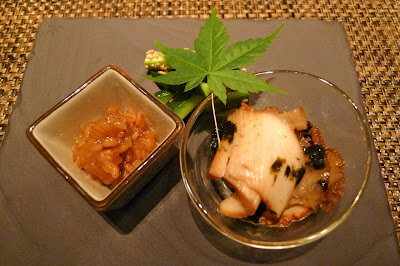 Abalone and Kyuri – the fresh, braised abalone was a world away from the tinned variety I had previously eaten in the UK. Its subtle, scallopy sea-like sweetness in perfect synergy with the umami rich golden whole grain miso and pickled sesame topped cucumbers. 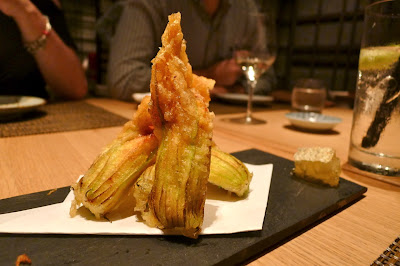 Zucchini Blossom Tempura – stuffed with Hokkaido Scallop and Hairy Crab (Kegani), these were absolutely delicious accompanied by oozing fresh honeycomb (not the stuff in the middle of a Crunchie… the proper stuff from bees!) 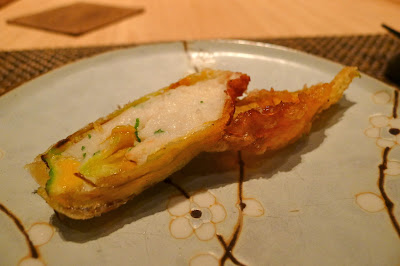 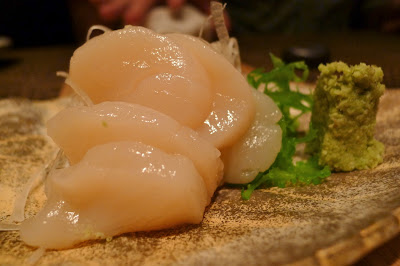 Trio of Maguro (Blue Fin Tuna) featuring the fatty Otoro Aburi, Chūtoro, served with a hint of garlic and a Marinated Akami. 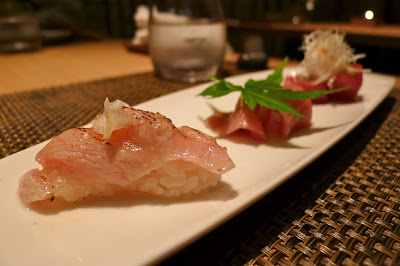 In 2010, Greenpeace added Blue Fin Tuna to its ‘seafood red list’, however in 2011, it was decided not to class the species as ‘endangered’, instead, it is ‘just’ a ‘species of concern’ – any morals I may have on the subject were, rightly or wrongly, less of a concern upon tasting. 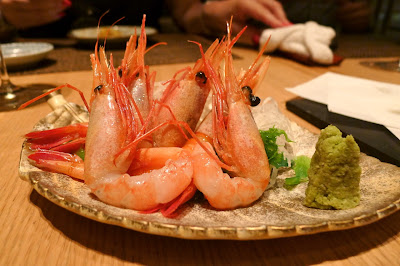 Amaebi – sweet tasty shrimp unusually (and pleasingly for sucking out the ‘brains’) served with their heads on.

Now onto the reason we had come to Fat Cow… the steaks.

Many times, after a decent steak, whether cooked in a Michelin starred restaurant, at a humble grill house or even on a friend’s BBQ, I have found myself saying, “That was one of the best steaks I’ve ever tasted.” 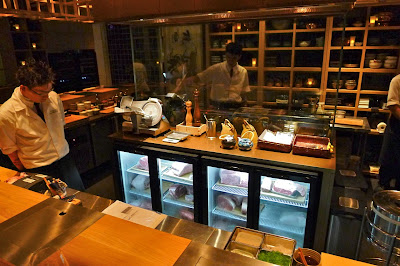 At Fat Cow, without a shadow of a doubt, theirs WAS the best steak I have ever tasted. Full stop.

As well as top grade half-blood Wagyu from Australia’s Stockyard Ranch, pure-blood Wagyu from the Blackmore Ranch and US Wagyu/Angus cross from Snake River Farms, the menu lists A3 and the highest attainable ‘A5 grade’ Wagyu from the Kagoshima Prefecture (widely, considered ‘some’ of the finest steak available any where in the world.) 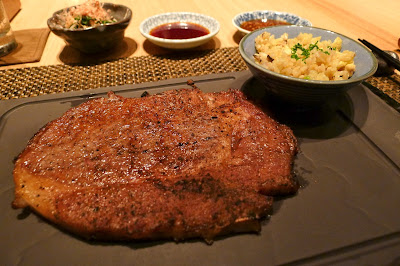 A little inside knowledge however told me to ask if their was any ‘special steak’ not listed on the menu. My luck was in, for they had taken delivery of what is generally considered ‘the best of the best’ ‘the Rolls Royce of steak’ – A5 Ohmi Wagyu from a premium herd where just seven cows are killed per year. (I could tell you about a dream I had, featuring seven Fat Cows and seven thin cows… but that’s a whole other story.)

Ohmi beef, hails from the remote rural settlement of Ohmi-Hachiman in the Shiga Prefecture of Japan. Over centuries the special care and feeding techniques developed by generation of skilled Ohmi farmers have led to the development of the matchless qualities of this most prized meat. 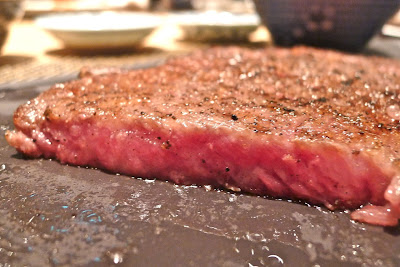 The pampering and attentive care for the cattle’s well being includes grazing in the unique mineral-rich ‘terroir’, water and fresh air on the banks of lake Biwa; as well as an apparent ‘stress free’ life, complete with regular massages and the ‘enjoyment’ of classical music.

I selected to have my steak served in a style known as ‘black and blue’ -seared on the outside on a white hot burning ‘Binchōtan’ Charcoal Grill. This grilling technique, which dates back to the Edo period, results in a distinctively smoky and flavourful charred crust but leaves the centre raw. 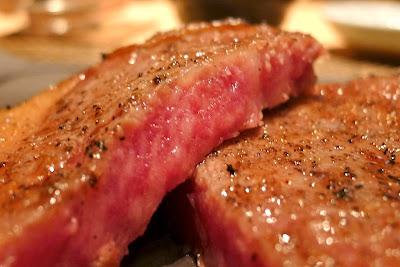 The first thing I noticed was that instead of setting the table with a steak knife, they put a rather blunt looking object that could’ve passed for a butter knife… I needn’t have worried for indeed, the cliché of being able to cut through the steak ‘like butter’ was subsequently proven. 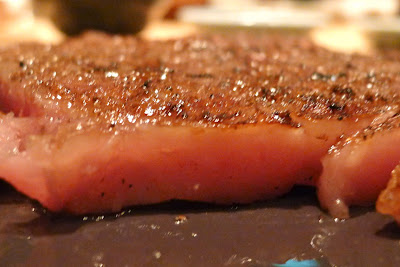 Despite being marbled with a seemingly greater percentage of fat than actual beef, the ‘sashi’ as the marbling is called in Japanese Wagyu always gives a unique sweet, smooth flavor that never tastes too fatty. I’m not sure why or how this is the case, but it’s something to do with the type of fat - more unsaturated fat than saturated, I think.

Compared with Wagyu that I’ve had previously, the Ohmi was a uniquely delicious and sweet meat, balanced with an umami richness and the most extraordinarily soft, melting texture and tenderness – every mouthful eliciting the kind of ‘oohs and aahs’ from me that should not be heard in a public place (fortunately we were sat in a private room and not at the main counter). 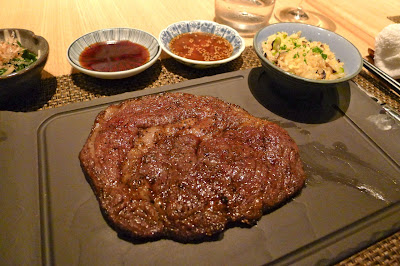 To compare, my stepson selected steak from the Australian Wagyu from the Blackmore Ranch, also cooked on the Charcoal Grill. Most ‘Wagyu’ producers outside of Japan actually stock crossbreeds; Blackmore is among the few ranches that rear ‘fullblood’ cows. The Australians use a different quality grading to the Japanese.

Rated 8+, this was one below the highest 9+, but still a premium steak of exceptional quality. Up against the Ohmi, it couldn’t compete in terms of ‘melt in the mouthability’ but for pure beefy goodness it was still one of the best steaks I’ve ever had. 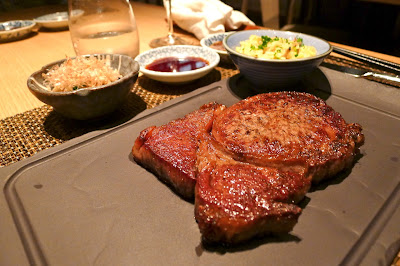 My stepson’s partner went for the Stockyard beef, flash seared on the ‘Teppan’. Another, excellent quality beef with a much more robust flavour, but again, compared to the Ohmi it was outclassed – It’s a strange thing to say, but this actually tasted like ‘a steak’ whereas the Ohmi had a flavour and texture entirely of its own. 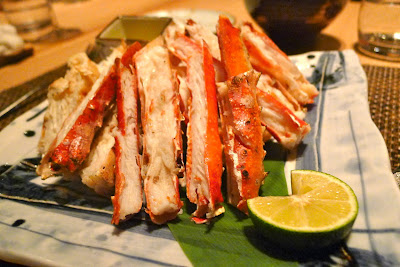 My wife opted for the Alaskan King Crab – like the meat at Fat Cow, the crab is paid for by the gram. I’m pretty sure she ordered 200g (the same size as our steaks) that turned out to be an impressive portion of the most delicate, sweet and piquant crabmeat.

To accompany our mains, we shared some grilled sides: Nasu (eggplant); Satsumaimo (sweet potato); Shironegi (giant spring onions) and Shishito (Japanese pepper). All were tasty but the Nasu and Shironegi were my favourites. 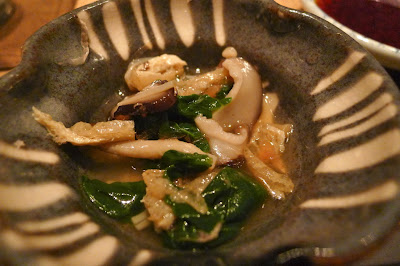 The final side was a ‘soup’ made with the rare and flavourful Matsutake or ‘The King of Mushrooms’. I love mushrooms but considering the price paid, these didn’t blow me away – I’m glad to have tried them though and would have them again given the opportunity.

We decided to swerve Fat Cow’s desserts and instead went to Janice Wong’s 2am: Dessert Bar.