A Beginner’s Guide To... Ten Of The Best Pizzas In Naples

If you’re heading to Naples (Napoli), I’m guessing one thing you’ll definitely want to do is visit museums and art galleries eat pizza.

Prior to visiting, I did plenty of research as to where the best places are to do just that. Sadly, some of those on my list were closed for their August holidays (Starita and 50 Kalò being the most notable examples).

There are already various ‘best of’ and ‘top 10’ lists on the internet, unlike the authors of the majority of these, I’m not a self-proclaimed pizza expert (to be honest, I’m not even that much of a pizza fan. “Sacrilege!” I hear some cry). But, as they say, “when in Rome” and I was in Naples… “the home of pizza”, it would have been rude not to! 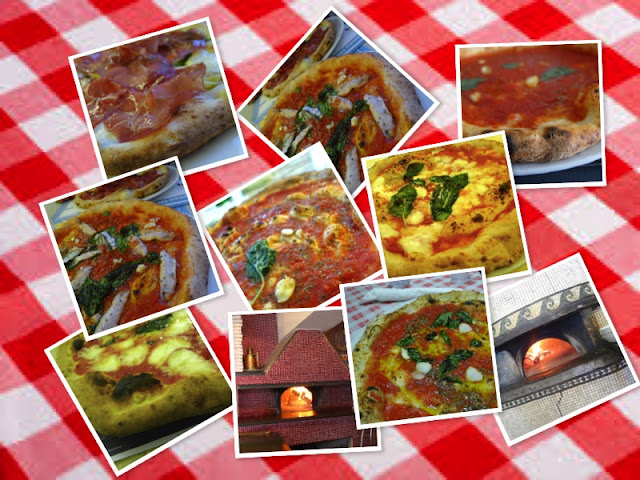 Throughout many of the numerous lists, constants as to where the best pizzas are to be found include historic pizzeria such as, Da Michele (made famous by Julia Roberts in “Eat Pray Love”), Di Matteo (made famous by Bill Clinton), Starita (made famous by Sophia Loren and having a branch in New York) and Pizzeria Sorbillo.

Whilst these pizzerie have been around for many, many years (Da Michele dates back to 1870), one upstart that has been challenging for the number one spot in these lists is La Notizia – an artisanal pizzeria by pizzaiolo Enzo Coccia.

Pizzas in Naples are perhaps a little different to what you are used to – wood fired (taking just 60 – 90 seconds to cook), they have an ultra thin base with a fluffy, chewy crust. Signs of a perfect pizza show singe marks called ‘leoparding’ on the crust and base.

The thinness of the dough, along with oil and tomato sauce pooling in the centre (giving a ‘soupy’ consistency) mean they are usually eaten with a knife and fork or via the ‘quad fold’ method, if enjoyed as street food.

L'Antica Pizzeria Da Michele (Via Sersale, 1/3) – often touted as “the best pizzeria in the world”, Da Michele was undoubtedly the busiest (and touristy) of the places I visited – no doubt helped by the scene from Eat Pray Love with Julia Roberts (I haven’t seen it) and its status in the guide books but mostly, I’m sure, down to the fact that the pizza was indeed, quite special.

Like a supermarket deli counter, the deal here is get a number and wait in the street with scores of others until it’s called. Luckily, I was on my own and was ushered straight through to join three moody French (not that all French people are moody but these were) people to make a table of four.

Da Michele famously serves just two types of pizza, the ‘Marinara’ (tomatoes, oregano, olive oil, and garlic) and ‘Pizza Margherita’, which uses tomatoes, olive oil, fresh mozzarella di bufala and fresh basil leaves (applied before cooking). I went for the latter. No complaints re: the pizza but the place was just too busy and slapdash for my liking; I wouldn't return.

Pizzeria Trianon Da Ciro (Via Pietro Colletta, 44/46) – just up and over the road from Da Michele, Trianon is another long established (1923) pizzeria. With over 450 covers across three floors and two wood burning stoves, it seemed much more popular with Italians in the know than tourists.

They offer a wider choice than many Neoplolitain pizzeria, including their famous oversized  ‘a ruota del carreto’ pizza.

Pizzeria Di Matteo (Via dei Tribunali, 94) – another place popular with tourists, Di Matteo has a seating area but also serves takeaway pizzas and fried snacks, including ‘pizza fritta’. Not wanting to wait for a seat, I ordered a pizza to take away. Like all pizza in Naples, it was good but not worth the wait.

La Figlia Del Presidente (Via Grande Archivio 23) – In Naples, it’s much more common to find a pizzaiolo (male pizza chef) than a pizzaiola. At La Figlia Del Presidente (The President’s Daughter – it was her father who cooked the pizza for Bill Clinton at Di Matteo), Maria Caccialli serves her pizzas in a glorious setting within an old vaulted bomb shelter. A delightful place!

Pizzeria Al 22 (Via Pignasecca 22) – located at number 22 on the bustling market of Via Pignasecca, I particularly enjoyed this pizzeria. If I was a local I think it would be one of my favourite pizzerie. Unlike the touristy haunts in the guides, it was not too busy but still served an excellent quality, value for money product. Their ‘Marinara’ was the best I ate. Friendly folk too!

Pizzeria La Notizia (Via Caravaggio, 94) – Enzo Coccia owns two branches of the modern La Notizia (the other at Via Caravaggio, 53). It’s a little out of the city centre but was so worth the effort (taxi ride). I had a fairly traditional Marinara with the addition of alici (anchovies) – fresh, plump, vinegared ones (not the salty fellas you find in tins). 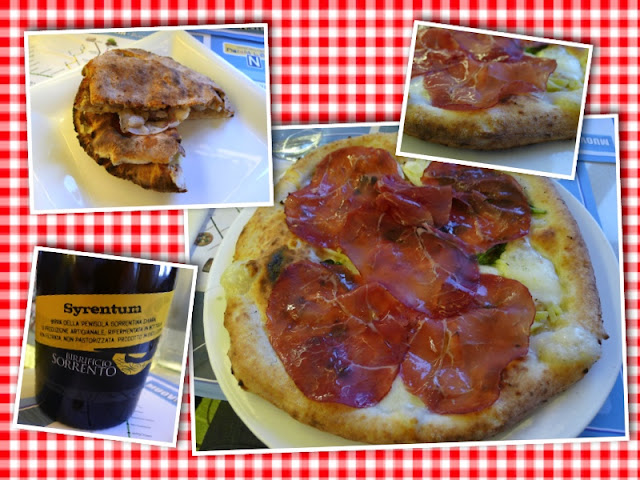 My wife had the ‘Citreum’ topped with the thinly sliced pith from Albedo of Procida lemons, buffalo mozzarella and air-dried buffalo beef. This sounds like a new idea but is apparently based on a 2000-year-old Roman recipe. We also enjoyed ‘Murzillo’ (something akin to a pizza dough pita bread) – one with Pecorino di Laticauda & ventreseca (pork belly) and one with brawn and smoked mozzarella.

It seems, that in the polite way queens do, she commented on liking how, on one of the pizzas, the tomatoes, basil and mozzarella represented the red, green and white of the Italian flag… the ‘Pizza Margherita’ was born!

Judging by all the framed pictures along with an endless stream looping on the wall mounted TV of the current owner draped over various “celebrities”, the owner seemed to think he was one too – this I found quite nauseating. Of all the places visited, this is the one I liked least – to me if felt as they were trading on the history rather than quality of product and friendliness of service; an overpriced touristy trap that I’d avoid in the future.

Palazzo Petrucci Pizzeria (San Domenico Maggiore, 16) – an off shoot of the Michelin starred Palazzo Petrucci, the pizzeria is also located in the Piazza San Domenico Maggiore and has plenty of outdoor seating, a great spot for people (and pigeon) watching. Inside, the pizzeria is swankier than most but you’ll pay for the privilege. My marinara pizza was too tomato-ey for my taste. Good dough though.

La Masardona (Via Capaccio Guilo Cesare, 27) – not strictly a pizzeria, La Masardona is reputedly the best place in Naples for pizza fritta (fried pizza). Having never tried it before, the idea sounded like an abomination but it really was quite enjoyable – filthy, but enjoyable all the same.

It certainly had the biggest queue I’d seen in Naples for a non-touristy place. I took the lead from the chap in front of me and ordered the ‘Completa’ (ricotta and provelone cheeses, tomato, basil, pepper and cicoli – a type, of pressed, fatty pork rind).

Minutes later, I was handed a wax paper wrapped parcel that felt like it contained lava from Vesuvius. I found a place to sit – a broken chair by a roadside that may have ‘belonged’ to the homeless chap sleeping nearby. I could see these taking off in Manchester if anyone decided to put them on the menu.

Another “Ten of the best: Pizzas in Napoli”?

Without time (or belly space) to try all the highly rated places, I’ve added an extra ten pizzerie to this list that I hope to get around to trying on my next visit – if you’ve been to these (or others), please comment at the bottom of this page.

Pizzeria Starita a Meterdei (Via Materdei, 27) – established in 1901, Starita is widely considered one of the best. After making the journey we discovered it was closed for August holidays so we sadly didn’t get to try.

Europeo Di Mattozzi (Via Marchese Campodisola, 4) – a Michelin listed restaurant, we had an enjoyable meal here but did not get back  for the pizza.

Pizzeria Da Pellone al Vasto (Via Nazionale, 93) – a quality place, in a non-touristy area a little walk from the main station (I walked there but found it shut for August, like many others) Their pizza fritta is a specialty.

Il Pizzaiolo Del Presidente (Via dei Tribunali 120/121) – the pizzeria belonging to the father of the daughter who owns La Figlia Del Presidente who used to work on his brother’s Di Matteo. Confused? Much.

Pizzeria Port'Alba (Via Port'Alba 18) – widely believed to be the world’s first pizzeria, traces it’s roots back to 1738. Since opening in it’s current location (1830) the pizza oven has been lined with lava rocks from Mount Vesuvius.

Pizzeria Oliva Concettina ai tre Santi (Via Arena della Sanità, 7) – another traditional pizzeria (1951) not far from Starita. Worth checking out if you’re in the area. The menu of fried dishes and pizzas looks good.

Lombardi a Santa Chiara (Via Benedetto Croce, 59) – annoyingly, Lombardi was not on my original list and I must’ve walked past it on several occasions. Opened in 1892, it’s looks another traditional Neapolitan pizza place that has had time to perfect what they do.

Pizzeria Da Attilio (Via Pignasecca 17) – another on the bustling Via Pignasecca 17, opened since 1944, it’s got to be worth checking out if visiting the nearby Al 22. Closed August.

50 Kalò (Piazza Sannazaro, 201B) – open just a couple of years, Ciro Salvo, the young, pizzaiolo at the helm, is taking on the long established places by sourcing the best ingredients such as heirloom tomatoes from small regional farms, premium olive oil and the best “00” flour. Really gutted 50 Kalò was closed during my visit. There is always next time.

Email ThisBlogThis!Share to TwitterShare to FacebookShare to Pinterest
Labels: A Beginner’s Guide To..., Italian, Italy, Naples