"Best of the rest" March

It’s been a funny old month for my blog and twitter.

Along with @hollowlegs, @McMoop and @Tweat_Up, my twitter account @hungryhoss was suspended on March 10th for retweeting a screenshot of an email from a London based blagger to Gauthier, Soho, asking for a free meal in exchange for a “positive review”.

Unknowingly, as I only read the main body of the email, it contained the charming fellow’s phone number and we were subsequently reported for breach of the data protection act, or some such.

The marketing director for Gauthier, @Jameslewisland, who posted the original tweet, has since had his account reinstated. Despite following the appeal process which should “take a few days”, at the time of writing, other accounts seem to be in twitter limbo or are permanently suspended, who knows?

Not being on twitter, which I see as an extension of the blog, I thought it was finally time to hang up my camera and notebook. An idea I had been toying with for quite some time. After a few days I had the ‘urge’ to write up me meal from The French by Simon Rogan’s first birthday.

On a roll, also posted pictures and a few words about the Michelin starred Adam’s in Birmingham.

Here is the pick of the other places I visited in March, with pictures of some of the foods I ate: 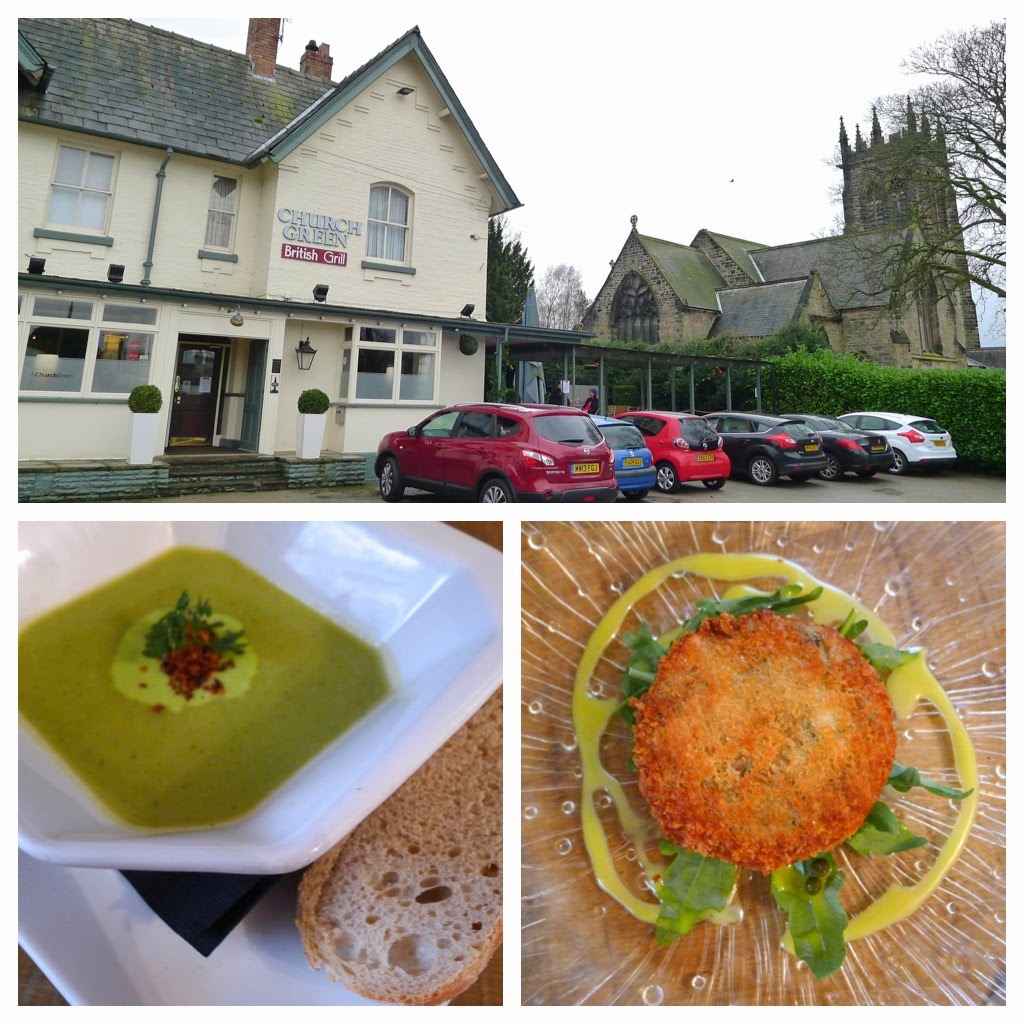 I’ve eaten several meals at The Church Green over the years but this was my first since chef / proprietor Aiden Byrne moved to Manchester House.  Young chef, Ben Chaplin heads up the kitchen these days and I experienced no decline in the quality of food or service since my previous visits. 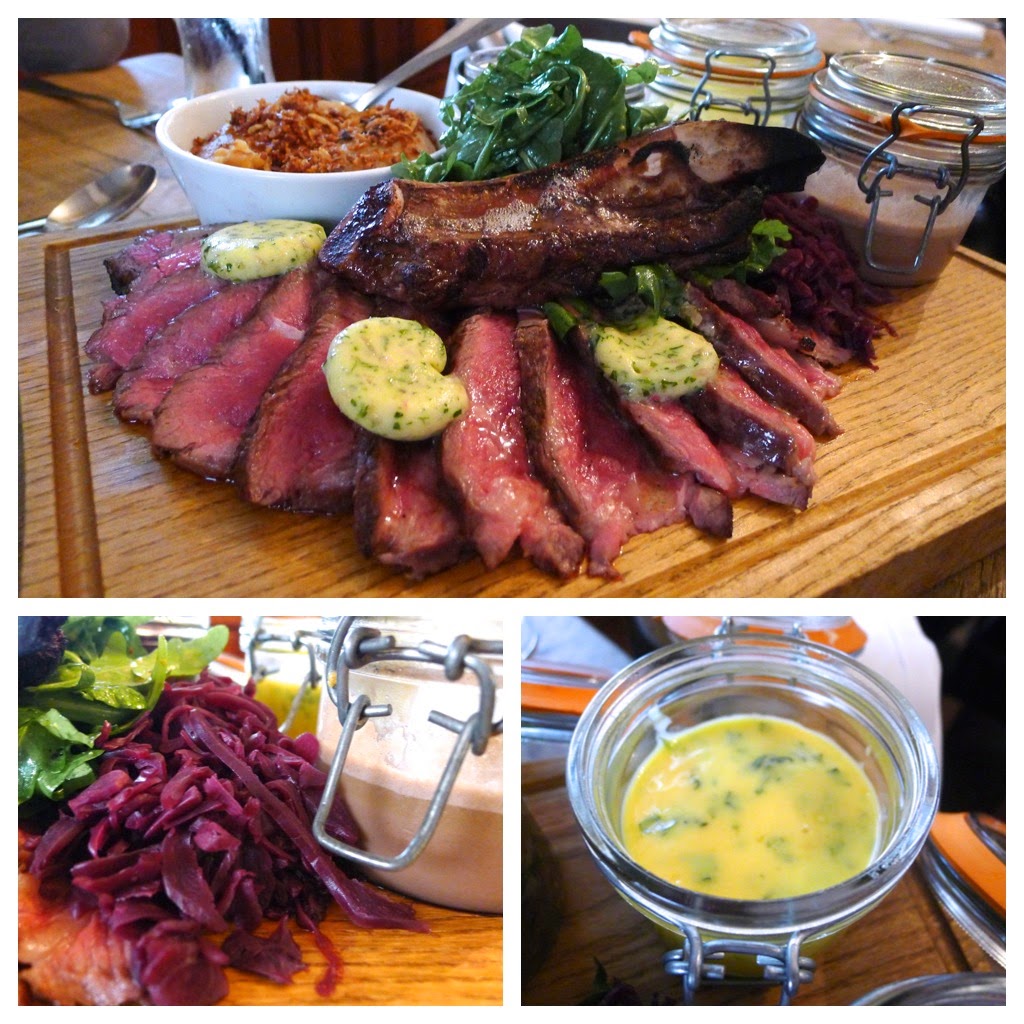 The star dish was undoubtedly the 25oz Wing Rib of Beef – we selected: Cauliflower mornay, Parmesan and truffle fries, Roasted onion mash, Braised ox cheek and crispy onion and Pickled red cabbage as sides; and Béarnaise and Port and Stilton sauces. The pot of Ox cheek was fabulous – hearty, full of flavour and crisp crispy onions! 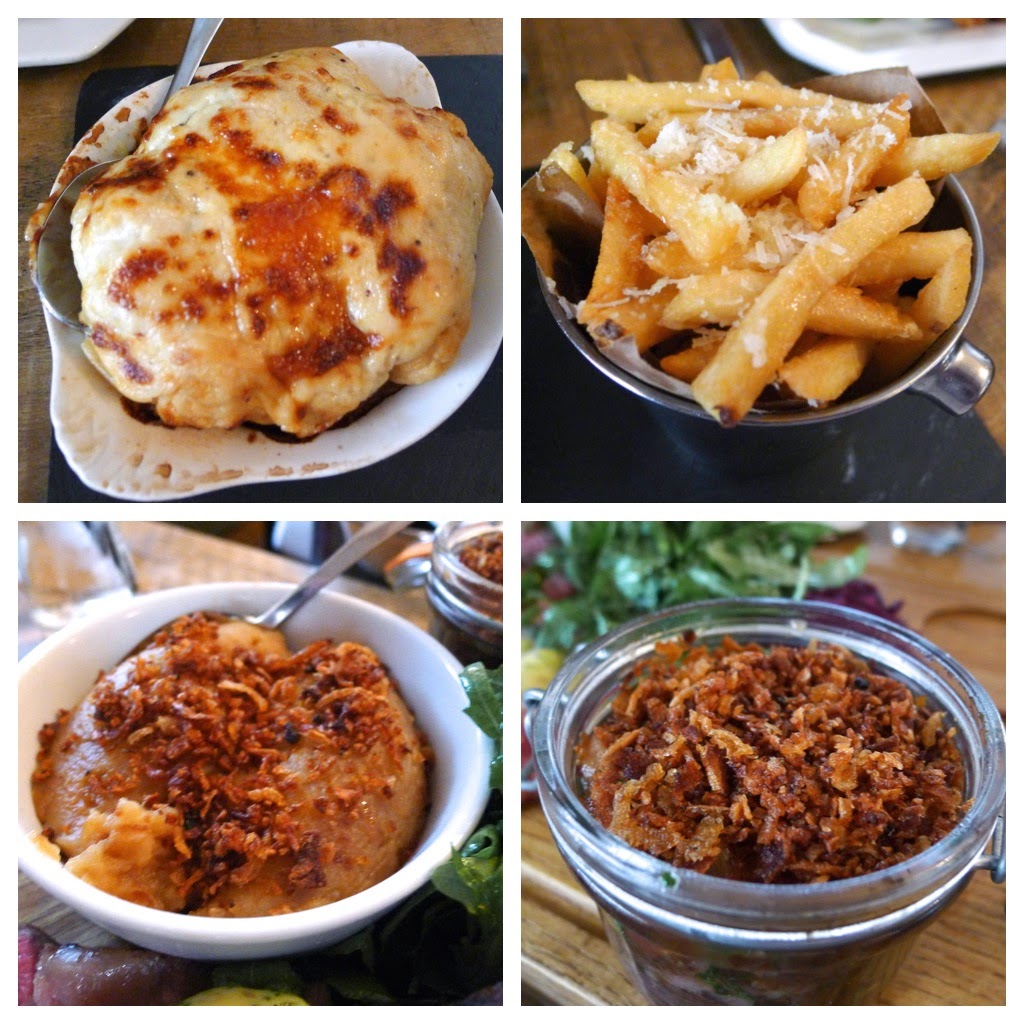 Also very good was the Sunday Roast of pork loin with apple sauce, crackling and all the trimmings and my starter of Roast celeriac and black garlic risotto with scallops. 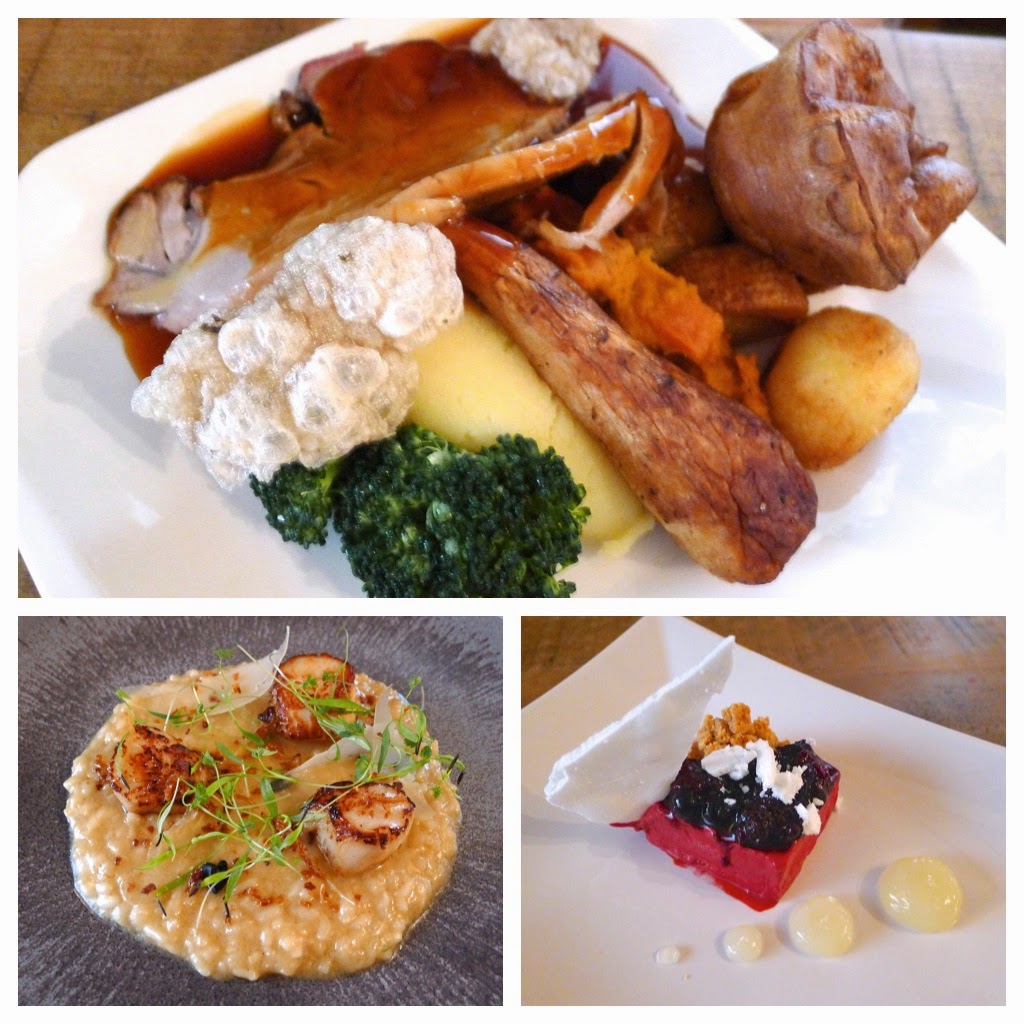 We also ate: Soup of the day with crusty bread; a large Smoked haddock fishcake with a rocket and caper salad and Berry parfait with lemon and meringue for dessert.

With 3 AA rosettes, the Peacock at Rowsley is a highly rated restaurant and boutique hotel (listed on Mr & Mrs Smith). We went for the 3 course set lunch but added an extra starter to create our own ‘tasting menu’.

Head Chef Dan Smith started out his career under John Burton Race and Alan Murchison at L’Ortolan. Later working under John at the two Michelin starred Landmark and for Tom Aikens. As you’d imagine his food has a firm grounding in tradition.  We ate: 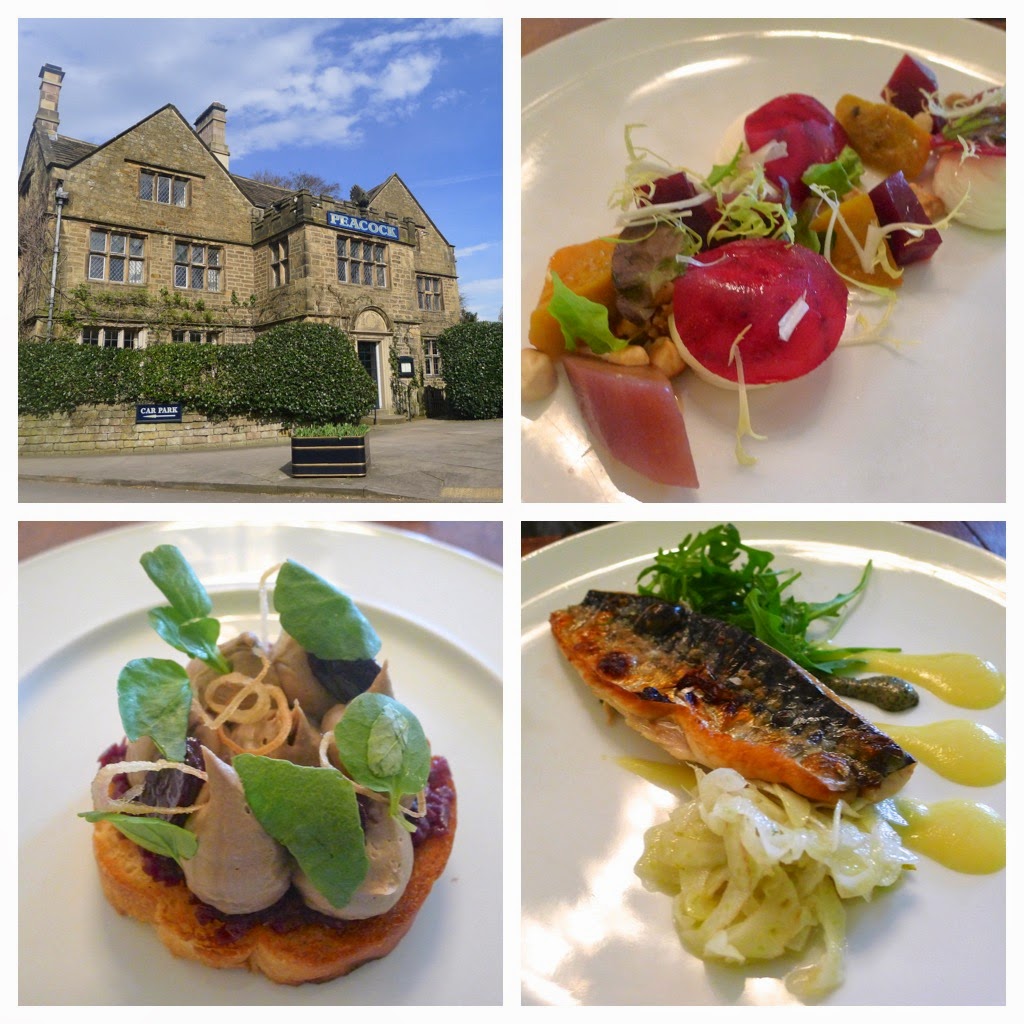 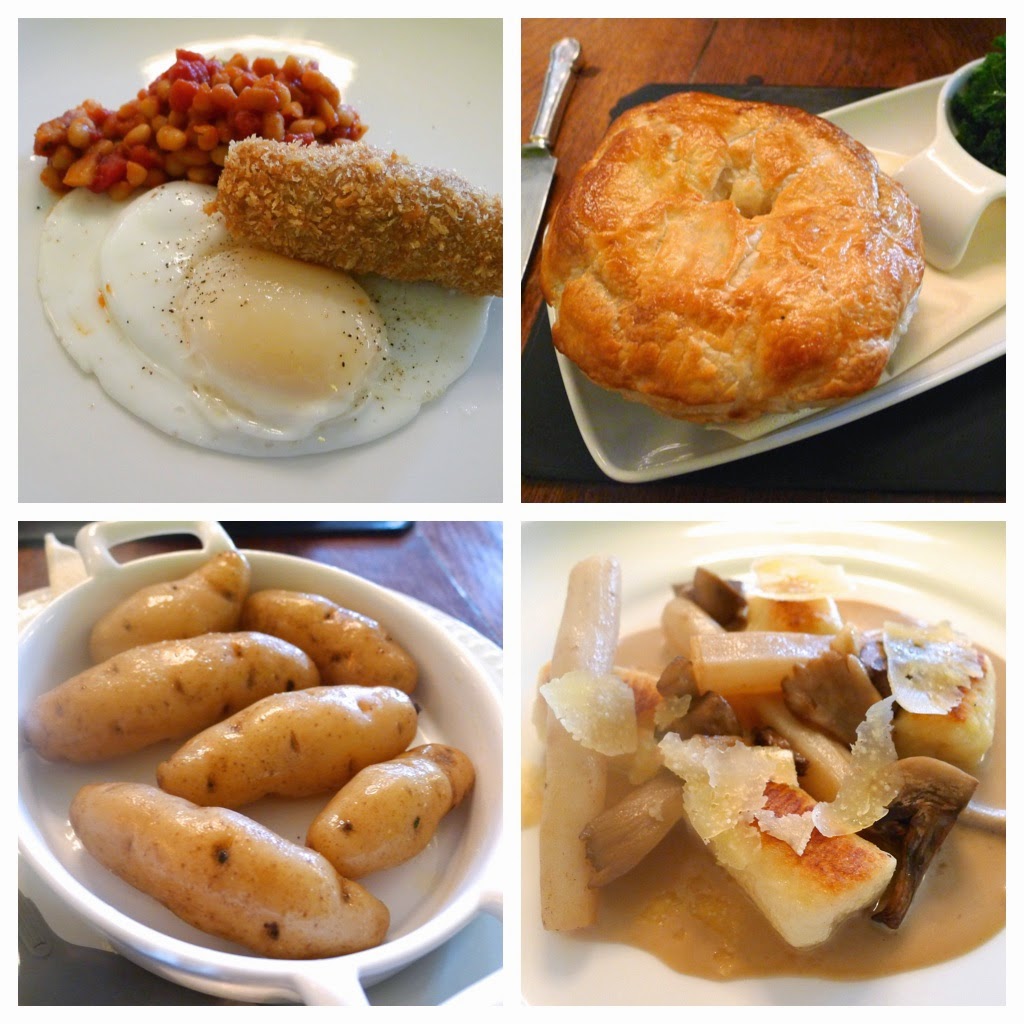 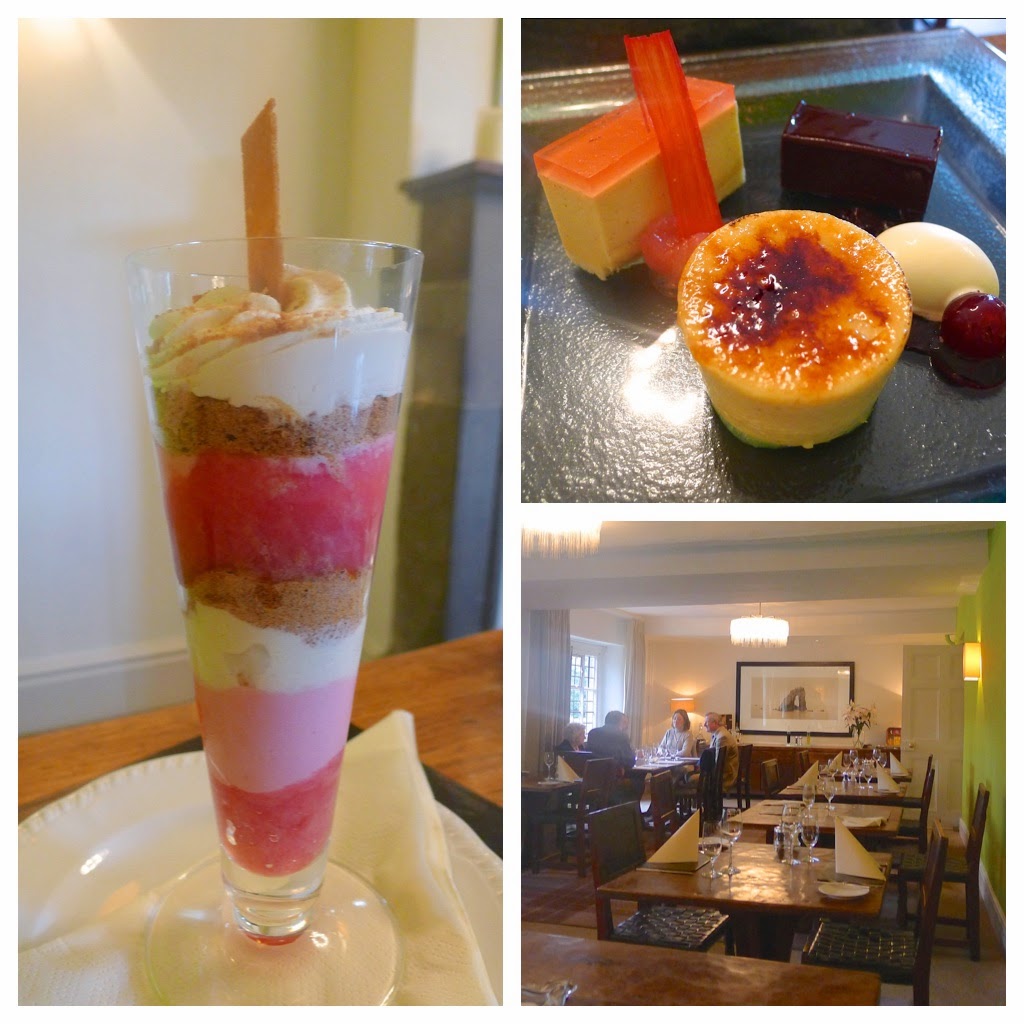 Bollington Packet - a ploughman’s lunch on the idyllic Cheshire waterways.

He is offering a wide range of bespoke cruises for up to twelve people – serving afternoon teas, lunches and traditional 3 course fayre at very reasonable prices. He will be serving local produce, including excellent bread from local artisan bakers Flour Water Salt. 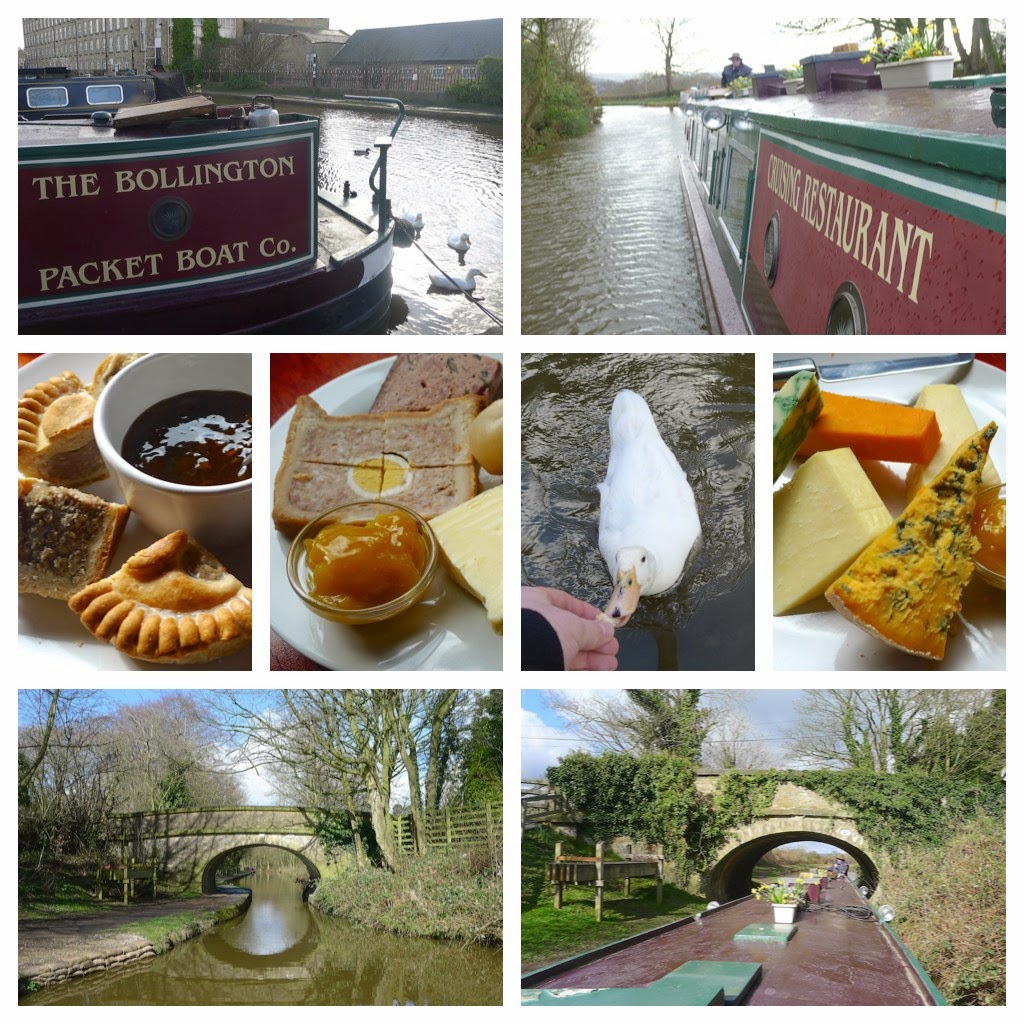 Recently, myself and some shipmates were invited on board for Ashley’s maiden voyage – he has plans to replace the modernise the kitchen galley, so give him a follow on twitter (@BollyPacket) and bear the “Bolly Packet” in mind for something a little different. 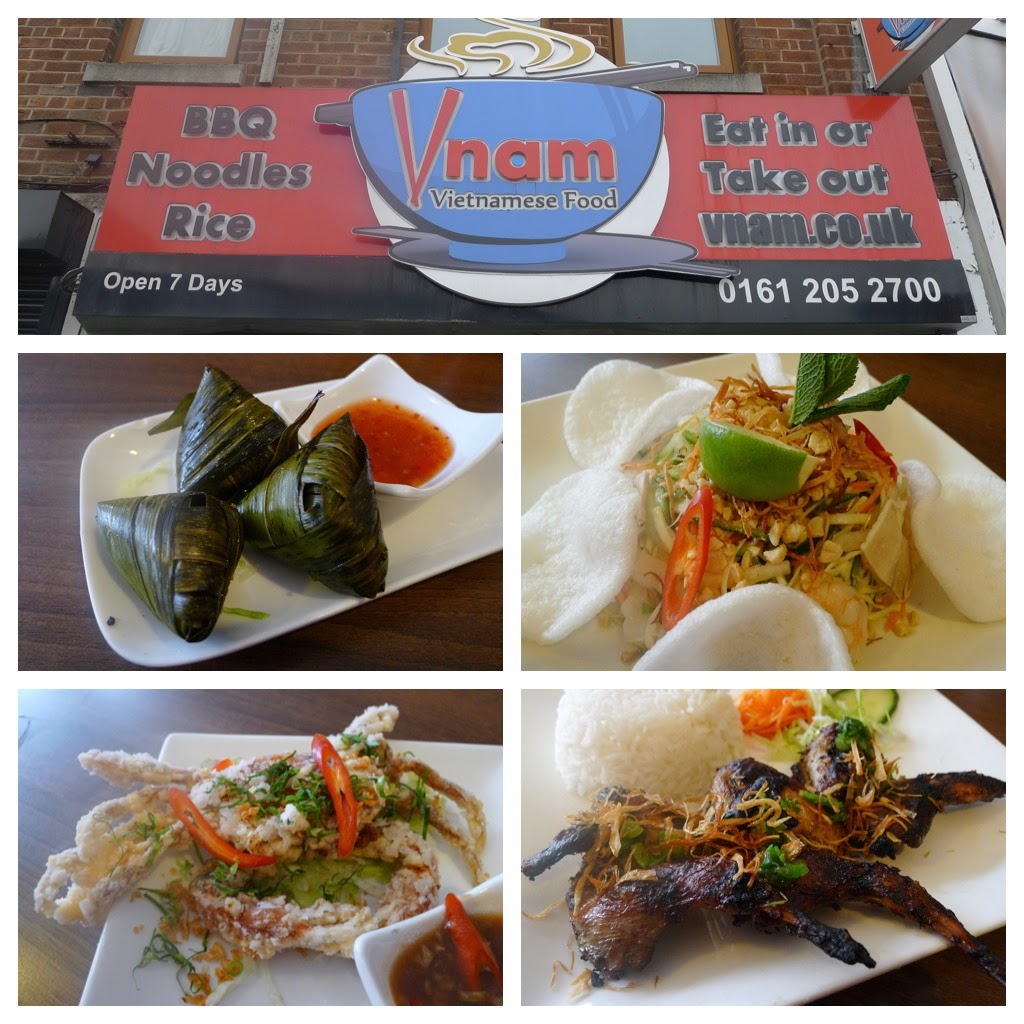 Another homely place, Mama Flo’s on the A6 in Stockport is a Jamaican restaurant and takeaway, formerly located in Gorton. It’s only been open a couple of months but has already built up a loyal local following – I have had more word of mouth recommendations for here more than any other place recently. 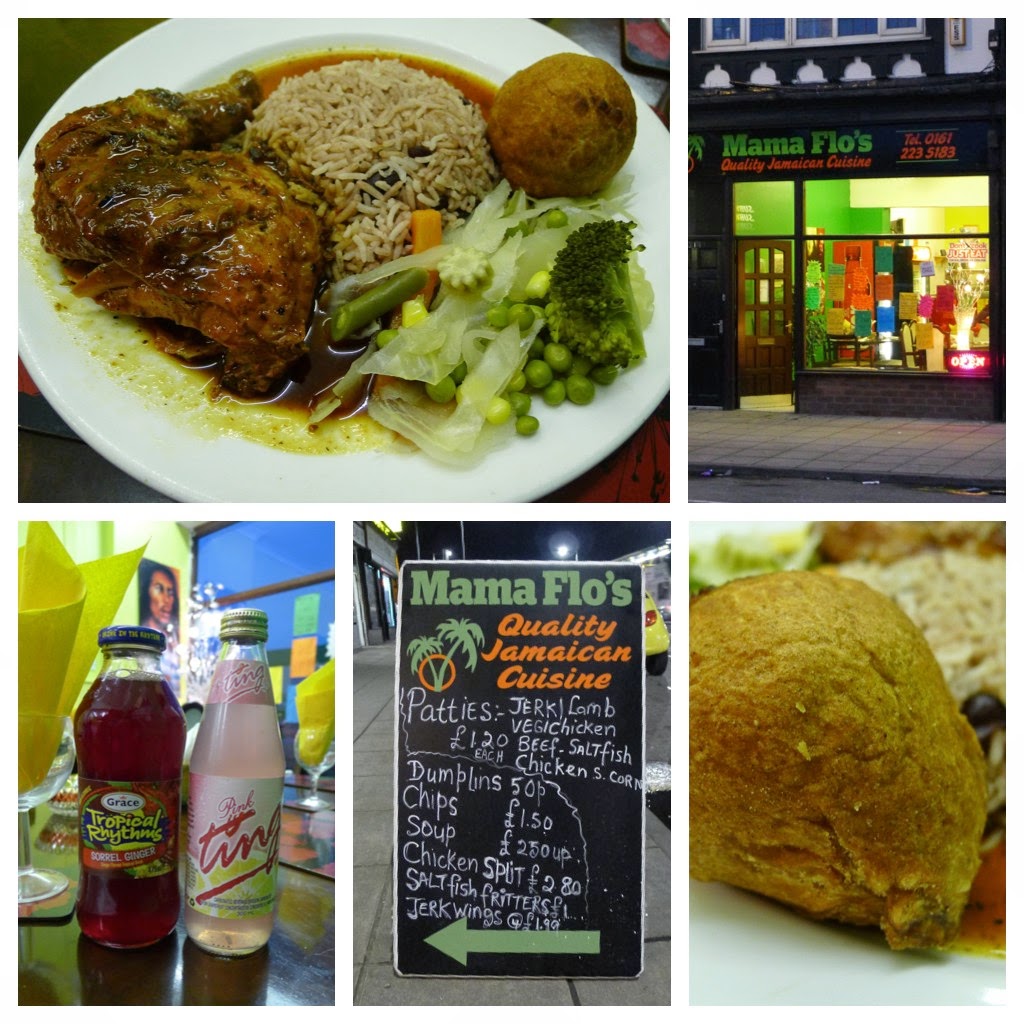 I have had takeaway on a couple of occasions, including their fish dishes and Ackee and Saltfish. Eating in, I recently had their Jerk Chicken - it may not be the best jerk in Manchester but Mama Flo’s has undeniable authentic charm. 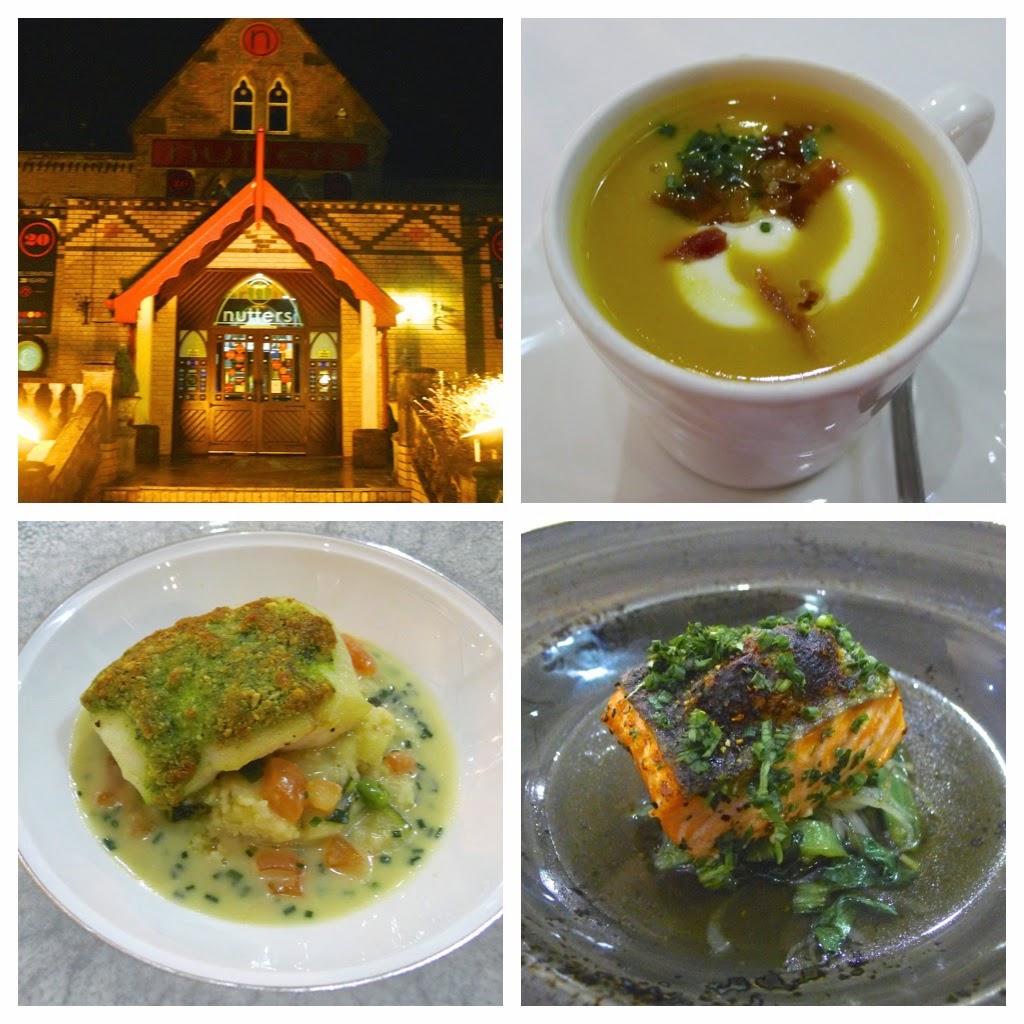 From a jerk to a Nutter – for her birthday, my wife gave me the simple brief of taking her “somewhere with a tablecloth”. Not many places these days afford such luxuries but Nutters is the perfect place for old school indulgencies with a modern twist. 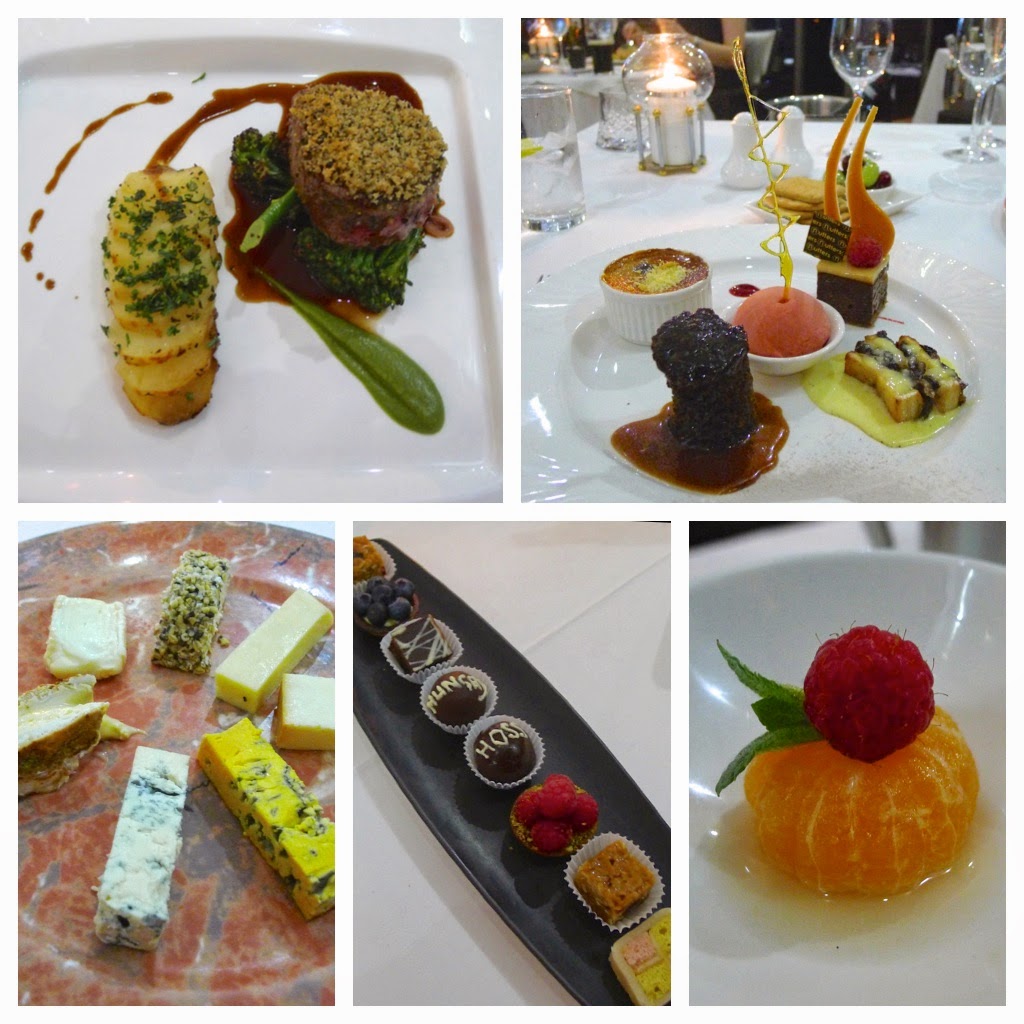 At £42 for six courses at dinner, his surprise ‘Gourmet Menu’ provides almost unparalleled value. We had: Canapés, Butternut Soup, Brill, Salmon, Peppered Limousin Beef, Cheese or The Dessert Medley (or one of each to share) as well as Coffee & Petit Fours - plus a baby clementine soaked in Grey Goose Vodka!