Nobu - London at The Metropolitan

Through many of my blog posts now, I have declared my love for most things Japanese. Although not yet lucky enough to have visited the country, I am fascinated by its culture and cuisine. Occasionally though, I hear something that is a little strange, even for a certified Japanophile like myself. 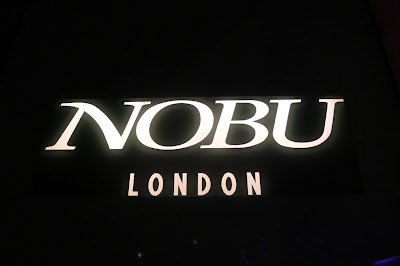 No, I’m not talking about the eating of the potentially fatal puffer fish, ‘Fugu’ or the live ‘Dancing Icefish’ known as ‘Shirouo nor Odorigui’ or even the semen filled male fish genitalia ‘Shirako’ – all of which I’d happily, and in fact am quite keen to, eat. 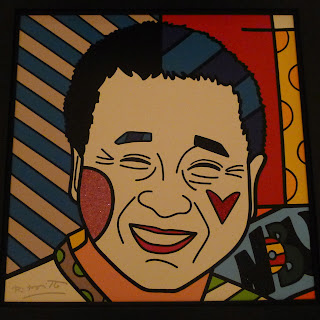 Instead, what I find strange is the occasional, ‘odd custom’ – one such being, the common assertion that some Japanese Wagyu cattle are ‘massaged by virgins’. The massaging, I get… I appreciate that the massage may help muscle tone, tenderise the meat and relax the beasts… but why ‘virgins’? 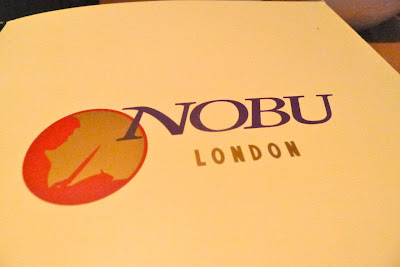 I came across something similarly ‘unusual’ to me, recently at Nobu London.

Firstly, unlike Nobu’s business partner Robert De Niro, I do not claim to be a saké connoisseur. (De Niro, apparently prefers to drink his favourite saké from a wooden cup made from the Japanese cypress tree, with a little salt sprinkled on the rim). 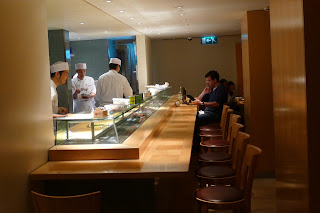 However, I do like the occasional drop of the stuff and when I saw that Nobu offered three different Saké Tasting Trays, I ordered the most expensive one… 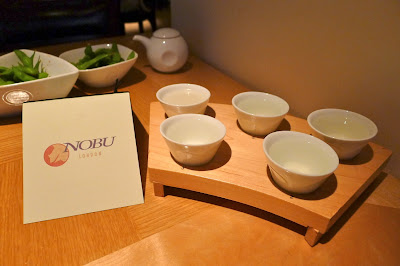 It was the third saké in the selection that made me do a double take: Ongakushu – a 10 year old, semi dry, smooth delicate Saké from Hokusetsu, ‘aged to the sound of soft soothing music.’ 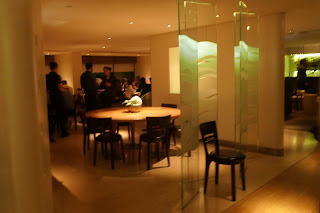 Could this be right? It turns out that Ongaku-shu, translates as “musical saké.” Aficionados claim that sakés, which have been shipped by boat, develop a deep taste as the saké is smoothened by the undulating motions of the waves… this makes sense.

Subsequently, the saké brewery (or kura) Hokusetsu, to, apparently, ‘recreate the wave-effects’ play the ‘New Age music of Japanese composer Kitaro to the bottles stored in a special cellar’ - I’d love to taste some that has been aged to punk rock; perhaps a reggae saké or even some that has been getting down with some dubstep?

Thankfully the rest of the meal did not question my sensibilities. 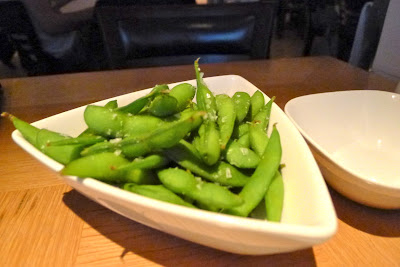 In a vain attempt to fit in with the rest of the hip ‘beautiful people’ that filled the other tables, I started with the customary bowl of Edamame beans. These are offered as you sit down, before being shown the menu. With a cost £4.50 for a small portion, next time, I’d give them a miss and peruse the menu first as there are other appetisers that are a little more exciting and possibly better value for money. 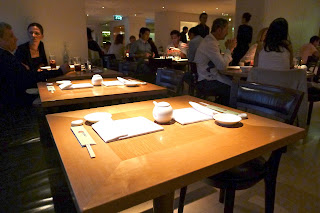 I ordered several dishes from across the menu sections – a mixture of favourite ingredients and dishes that sounded interesting. The waitress asked if I’d like them in any particular order or if I wanted the kitchen to decide the best order to send them – I left it to the chefs to make the decisions. 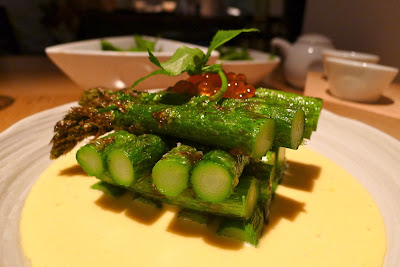 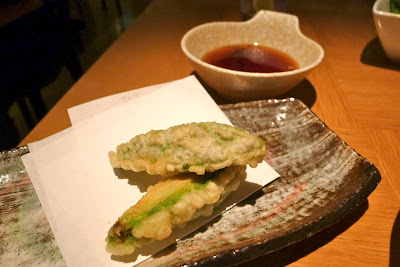 Grouping the veg dished together, an Avocado Tempura quickly followed– I selected the avocado over the other tempuras on the menu on the strength of the dish I recently had at Gaya Rive Gauche par Pierre Gagnaire (see here). This was great and something I’d definitely choose again.

I ate the vegetable dishes, with Nobu’s own Cho-Daiginjo YK35 Saké – the dry, delicate fruity and floral flavours working wonders to balance the richness. 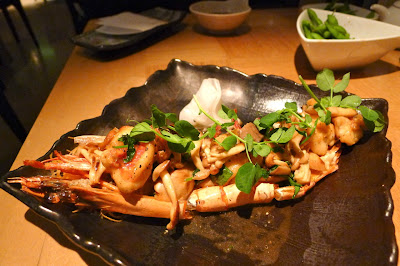 Next to arrive, showing off Nobu’s well-known Peruvian influences and presented beautifully, was a Jumbo Shrimp with Yuzu Truffle Sauce – the powerful citrusy yuzu truffle sauce had a fantastic citrusy ceviche-like flavour enriched with heady truffle. A big fan of mushrooms, they came as a welcome surprise as they were not listed on the menu. However, it was the perfectly plump pieces of jumbo shrimp that really made this dish the stand out one of the evening.

Another dry offering, I found the Junmai Daiginjo Yurara Saké with fresh, light notes of lime and peaches had a great synergy with the shrimp dish. 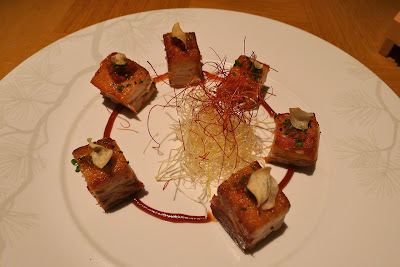 Tasty but not enough to wow me, the next dish to come was Crispy Pork Belly with Spicy Miso and Ginger Salsa – the crispiness on the outside of the cubes of pork was very good; inside however, I found them were a little dry. Whilst the spicy miso sauce was a winner, the ginger salsa seemed style over substance. 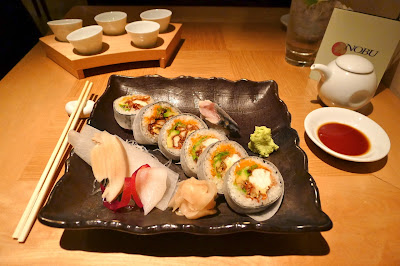 Next up, came my chosen selection of sushi and sashimi: Soft Shell Crab Roll, Mackerel Nigiri and sashimi of Abalone and Turbot. As these dishes were ‘from the sea’, I chose to have these with the aforementioned Ongakushu (musical saké) – its smooth, delicate flavours working well for me… maybe there is something in this musical malarkey after all? 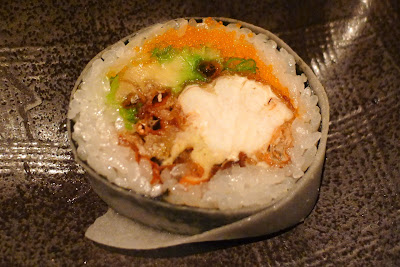 Encased in wafer thin sheets of daikon the Soft Shell Crab Roll looked impressive but I found this addition unnecessary and dry. After eating the first couple, I discarded the dry daikon for the remainder and to my mind they were much improved. The crab was deliciously sweet, the coating crisp with the tobiko (flying fish roe) adding a burst of seasoning. 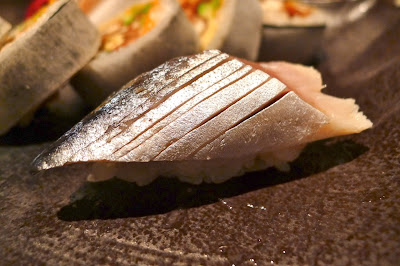 Abalone is often compared to squid and large clams in flavour and texture but I find the unique flavour incomparable, this had wonderful buttery edge to it – enhanced particularly well by the milky, unfiltered Nigori Saké. 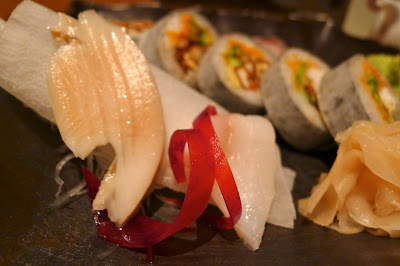 It was the first time I have had Turbot as Sashimi and I found it was not as soft and yielding as I expected it to be and was a little disappointed. I’m not sure is this was just a bit of a duff piece so would be keen to try it again for a second opinion. 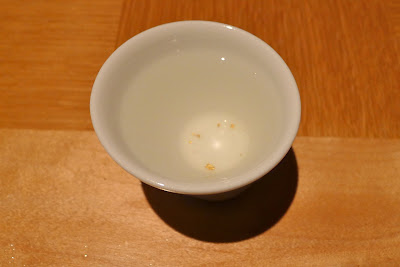 I drunk the final saké of the selection on its own without a food pairing: Honjozo Kinpaku-Iri – a dry, rich Sake with floating gold leaf, usually saved for special occasions. 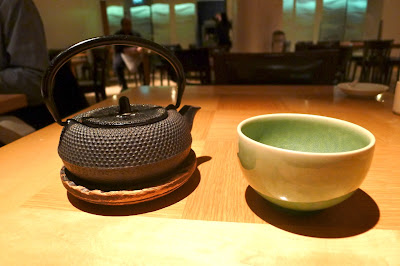 Having sat down to the meal at 21:30, it was getting late so I decided to skip dessert and instead finished my meal with some Hōjicha Green Tea. Hōjicha differs from most green teas as it is roasted over charcoal (as opposed to steamed) - although not a usual favourite of mine, tea with its umami rich, smoky and earthly flavours is a great way to end a late meal due to its naturally low caffeine content. 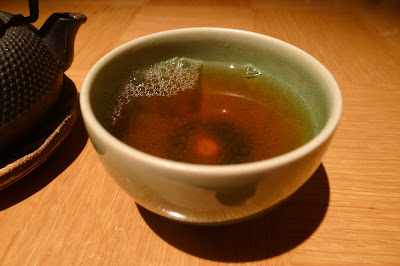 Nobu London at The Metropolitan is a top place to eat – it’s easy to see why it has maintained its Michelin star since 1998.  I’m now keener than ever to return to London to try out the newer Nobu Berkeley Street that has held its star since 2006… they even do a Japanese Afternoon Tea, which sounds fabulous.