I soon overcame the fact that they put the potato inside their meat pies and that they cover chips with gravy and mushy peas. They call rolls ‘balms,’ and a scallop is not only the delicious seafood but also a greasy battered slice of potato, commonly found in the chippy.

However, as a foodist living in Manchester, the thing that I struggle to come to terms with the most is that there are no great restaurants. Sure, there are some good ones, even one or two very good ones, but not a single ‘star’ in the whole of the city. For a Michelin devotee like me this is a serious bone of contention. Although, perhaps this does have it benefits.

Typically, I eat out several times a week, although this does often involve taking advantage of set lunch and dinner prix fixe offers. As much as I envy my fellow London based, foodies on my twitter and blog roll who have so many Michelin establishments on their doorsteps, I’m certain that my waistline and wallet would not cope if I tucked into a ten course dégustation on a daily basis.

Eating at fine dining restaurants is a hobby and passion of mine but for geographical reasons, going to a Michelin starred restaurant is a rare treat. Therefore, up until now I have tended to use my blog to share my dining experiences from holidays or special occasions, but with no ‘gourmet gallivants’ currently booked, I thought I’d blog about some of the better ‘local’ Manchester eateries.

I will start with Damson – a restaurant, which I have visited on several occasions that is based in the leafy suburb of Heaton Moor, Stockport (about 6 miles from central Manchester). 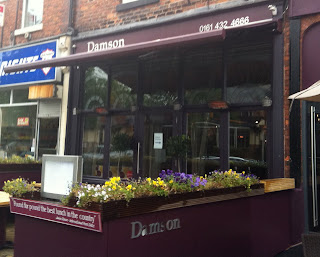 The late Anthony H Wilson was Manchester’s numero uno music impresario and Steve Pilling the restaurateur who operates Damson could be considered a contender to become his culinary equivalent. In his early days at the Midland Hotel, fresh from catering college, he once cooked for the Queen. Continuing to progress in the hospitality trade, he eventually became the man behind the neighbouring Sam’s and Mr. Thomas’ Chop Houses in the city centre.

As well as Damson, he now also owns the highly rated Red Lion gastropub in Stockport and will soon be returning to the city centre and opening the eponymous Mr. Pilling’s Roast Restaurant & Oyster Bar in the new Courthouse development on Manchester’s main thoroughfare, Deansgate.

The ‘roast and oyster bar’ and Damson are both joint ventures with Chef Simon Stanley. Once of Sam’s Chop House, Stanley is a talented chef who trained with Marco Pierre White and Raymond Blanc. With this pedigree it is no wonder Damson gets such glowing reviews from critics and contemporaries alike; Celebrity Chef Andrew Nutter is a confirmed fan, who, according to their website, once stated, “If you go to any other restaurant other than ours, go to Damson.”

Why then, is it not going to get a completely glowing and gushing review from me? Certainly, I do not purport to have a greater palate and knowledge than the more established critics and most definitely not more than Andrew Nutter. A chef whose food I have also eaten and thoroughly enjoyed on numerous occasions. The reason, I assume, is entirely my fault and as simple as this: I tend to be overcritical of the local restaurant – I will often announce to my wife that. “This bread is rubbish!” just because it doesn’t match up to that of The Ledbury, or “This cheese board stinks!” just because it doesn’t compare with the one at Le Gavroche.

Therefore, if I come across a little critical, please account for the fact that this is just my pretensions and, perhaps, slightly unreasonable expectations. With this in mind, Damson: 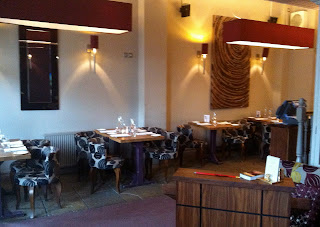 One thing I am not going to be critical about is the décor. The well spaced dining room and bar are tastefully decorated in sophisticated greys, maroons and deep reds, as well as plum shades evocative of the restaurant’s name. The textures of the exposed wood on the tables; the stone flagged floor; bold flock wallpapers and deep velvet fabrics help to further enliven the urbane opulence.

A criticism I do have relating to the ambience, and obviously one of personal taste is with the soundtrack. Phil Collin’s Easy Lover, The Eagles, Fleetwood Mac, Elton John and Dire Straits and a whole plethora of other 70s and 80s ‘legends’ being just some of the musical offerings that were obviously not to my taste or demographic. I always wondered who buys those compilations sold on various shopping channels that are, “Not available in the shops!” – Saying that, my wife loved it – no accounting for taste! 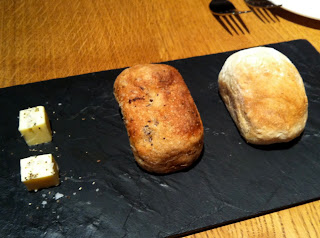 Enough of the ‘crummy’ music, let’s talk bread. Now, don’t get me wrong; complementary bread is always welcome, especially when served on a chic black slate with neat little cubes of seasoned butter. However, on my last couple of visits to Damson the breads have been decidedly chewy, bordering on rubbery.

Fortunately, music and bread aside, I don’t have too much left to be critical about.  On my last two or three visits to Damson, the best dishes, for me, have been the starters. 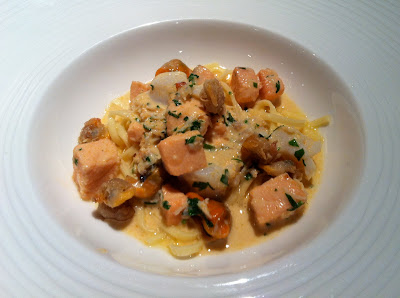 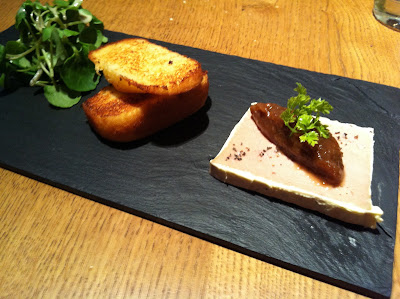 The Chicken liver & foie gras parfait, rhubarb & toasted ginger brioche – overall, is another good little dish. Perhaps the foie gras is a tad lost when accompanied by rhubarb chutney; but the excellent ginger brioche goes someway to make up for this. A dining companion and myself mooted the idea that the foie gras seemed as if it had been added to the dish merely to encourage its selection from the menu. 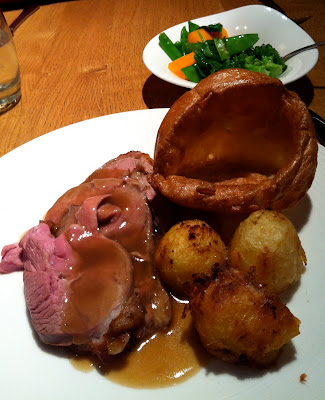 With regard to mains, on one recent trip I was lucky to get the Sunday Lunch option of Roast leg of English lamb, Yorkshire pudding, duck fat roasted potatoes & seasonal vegetables as the table that ordered after us were told that it was sold out; obviously a popular choice. The Lamb, although possibly not the best quality, was still nice and pink, even though it was the last portion to come out of the kitchen. The veg was cooked just how I like it, retaining a little crunch. The Yorkshires were, to quote a local phrase, ‘Bobby Dazzlers,’ the traditional gravy, equally dazzling. 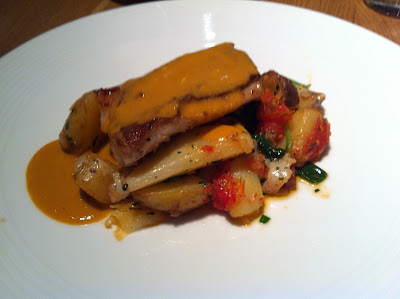 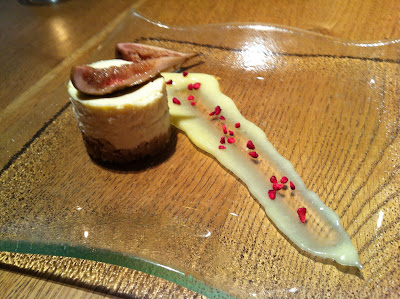 For afters, I wholeheartedly recommend, Baked lemon cheesecake, lemon curd & poached fig. The poached fig was sublime - an aromatic burst of cinnamon and a hint of star anise contrasted beautifully with the deliciously smooth and zingy lemon curd.

Another recommendation is the cheese board selected by Peter Papprill, better known as ‘The Cheese Detective’ – a nice touch being the ‘Cheese Menu’ which is available for browsing, enabling a more considered choice than the usual quick tour by the waiter. Of course, you can always, as I did, sample each of the fourteen on offer. Favourites of mine, being the Beaufort and the Barkham Blue.

Damson’s wine list is superb. To accompany the cheese, on recent visits, we have been working our way through the impressive collection of vintage Wiese & Krohn Colheita Ports. We have tried the 1961, ’64 (White) ’68, ’78, ’97 and just have the ’67 to go. For a ‘local restaurant’ the champagne collection is also pretty impressive, the Lalllier Grand Cru Blanc de Blancs going down well.

So there we have it, I wasn’t too critical was I? Just the music and the bread! I’m guessing people that who read restaurant reviews want to know, do you recommend and will you go back? Simply put: Yes I recommend; and until ‘we’ get a whole host of Michelin starred restaurants, like London, of course I’ll be going back because, at the time of writing, Damson serves some of the best food in Manchester!