Yesterday, on my way home from the International Cheese Awards, I took a short, unplanned detour to Aiden Byrne's ‘bar & restaurant’ The Church Green. I have eaten there now a number of times. 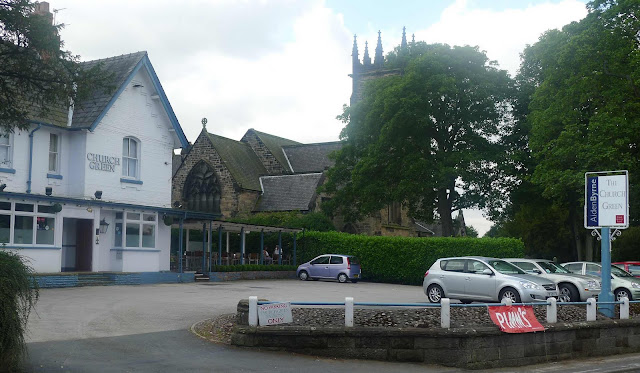 Many of you will know Aiden Byrne thanks to the Great British Menu television series where he has competed for the North West region against the talents of Nigel Haworth, Lisa Allen and the colourful Johnnie Mountain. 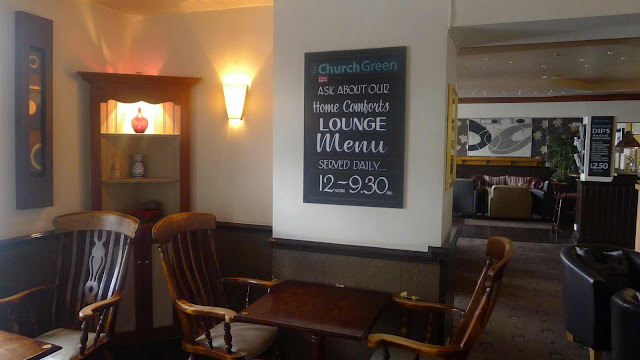 All week I have been looking forward to Friday evening when my wife and I will be dining at the official launch of Aiden's hotly anticipated collaboration with Macdonald Hotels at the new ‘Aiden Byrne's British Grill’, at their 4* Craxton Wood site.

Aiden started cooking at a young age in top kitchens such as those of Chester Grosvenor. An early starter, coupled with a prodigious talent, Aiden soon landed a head chef position at Adlards in Norwich. Here, at the tender age of 22, he was awarded his first Michelin star - making him the youngest chef ever to achieve such an accolade!

Including spells at Danesfield House and The Commons in Dublin, Aiden went on to work at some of the countries finest eating establishments. It was at the two-starred Pied à Terre that he met Tom Aikens (another young talent who, for a time was the youngest Chef, at 26, to win two stars; beating Marco Pierre White by a year). He later left with Tom to become Head Chef at his eponymous Chelsea restaurant.

Never one to rest on his laurels, Aiden then moved onto the prestigious Dorchester Hotel, on Park Lane and headed up The Grill. The Dorchester was no stranger to appointing talented young chefs; in 1975 they appointed a 28 year old to be their youngest ever Maître Chef de Cuisine, a certain Anton Mosimann.

To have such an esteemed employer with exceptional culinary credentials it certainly surprised many when Aiden took a huge gamble, seizing an opportunity, with his life and business partner Sarah Broadley, to return to the North West and open the refined gastropub, The Church Green, at Lymm. 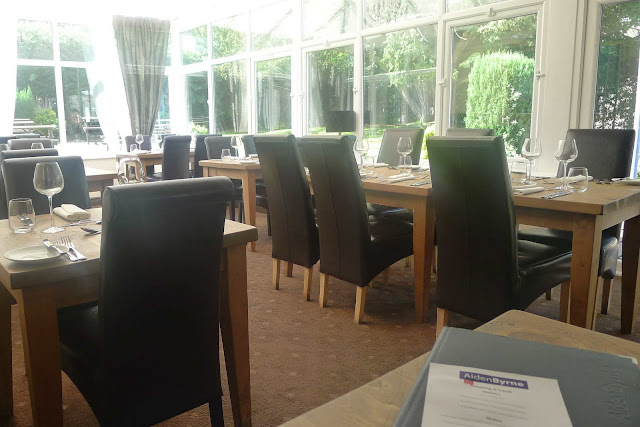 A large leafy village, Lymm is easily accessible for foodies from Manchester, Liverpool and Cheshire who may want to sample Aiden’s food. It is home to various celebrities, including Sir Bobby Charlton, Ian Brown (the singer from the Stone Roses) and Sir John Stalker (who interestingly, used to live in the house where I now live!) 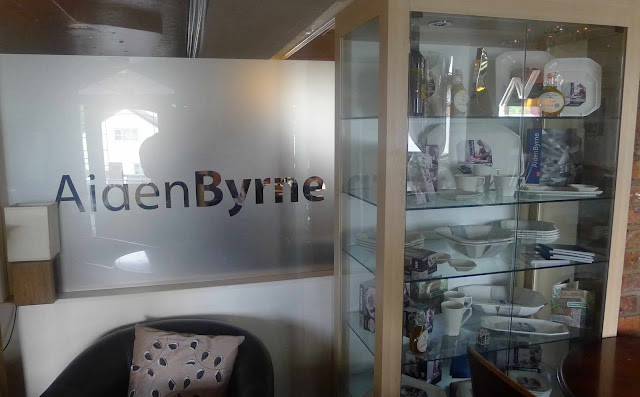 On arrival, I was greeted warmly and offered the choice of eating in the restaurant, bar or outside in the beautiful garden and spacious terraced areas. In the reception area, next to the frosted reminder of whose establishment you are about to dine, is a glass display cabinet showcasing Aiden’s ‘Made in Great Britain’ book, oils and bespoke collection of Spode tableware and cookware, called Asymmetry, which are all available to purchase.

I took my table in the restaurant, which is tastefully decorated in the typical modern British gastropub style: heavy wooden furniture; comfy leather chairs; parquet flooring all enhanced by rustic hues with subtle splashes of colour from artworks and, in places, the bold floral patterns of feature wallpaper. Individual touches including, a large collection of new and classic cookery books to peruse and some old church pews evocative of the ecclesiastical environs. 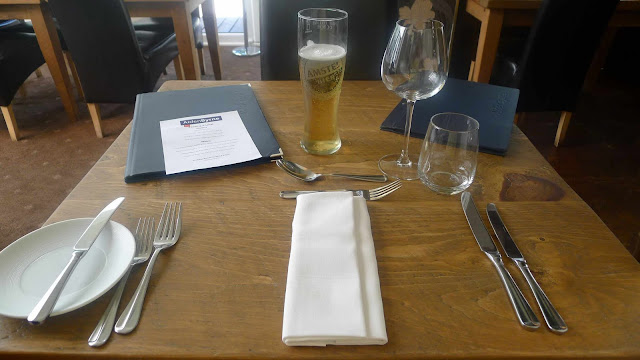 I had spent all morning sampling an abundance of cheeses so quickly dismissed the great looking Tasting Menu and instead opted for the two course 'Keeping it local' set lunch. The menu featured some tasty looking dishes. The choice of four starters including: Soup of the day (I didn’t ask, and was not told what flavour this was); Cured salmon with salad from our garden and Pork rillette with apple and walnut salad. The mains included: Poached chicken, truffle green beans and pomme mousseline; Whole grilled plaice, new potatoes and herb butter and Goat’s cheese with tomato and rosemary risotto. 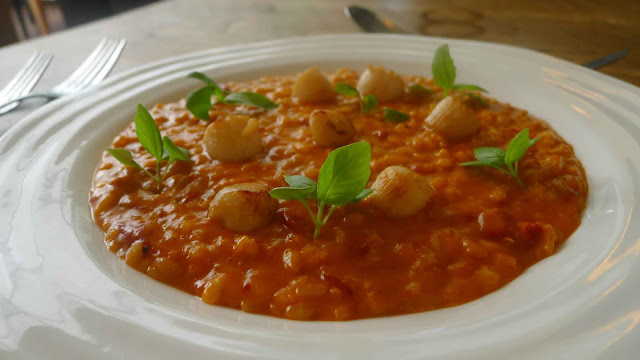 I opted for the Queenie scallops with red pepper risotto to start. Service was friendly and efficient and the food arrived promptly. The dish was vibrant and beautifully presented, with well cooked rice and scallops. I do not want this to be a criticism, but the dish was a little too sweet for my taste, appreciating that this is a nature of the component ingredients and that I simply did not choose too well. 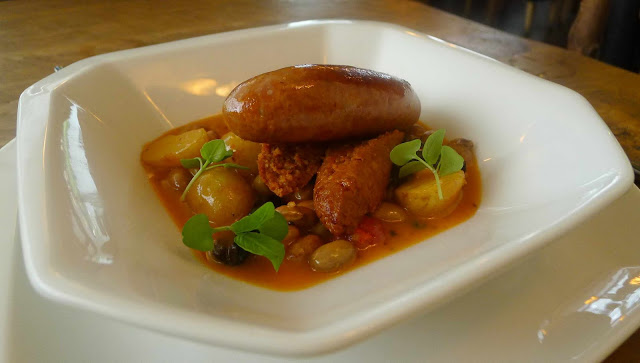 For my main, I selected Tomato and paprika sausage with new season bean fricassee – attractively presented in Aidan’s signature Spode crockery. This was another poor choice on my behalf; although, again cooked perfectly well with fresh quality ingredients, the dish once more was a little sweet for my palate. My wife, who enjoys a sweeter tinge to her food and tomato based dishes, would have loved this. Myself, I feel I should have opted for the grilled plaice.