Sketch was so good - we went three times on the same day!

Let me explain… We only usually get down to the capital, once or maybe twice a year and when we do, we like to make the most of it by eating in as many of its top eateries as we can, or more precisely, as our budget allows. Pierre Gagnaire’s London outpost has long been on our ‘to do’ list. Partly because of the extraordinary reputation of the ‘Godfather of Molecular Gastronomy’ and partly because the pictures we have seen of the dining room and decor make it look ‘right up our alley’ style wise. So, when our lunch exceeded our high expectations we decided to go for a little walk and then go back for afternoon tea.

We opted to take our tea in ‘The Glade’ as it was quieter than the usual ‘Parlour’. I love macaroons and of the four flavours on offer (Lemon and Basil, Rhubarb and Strawberry, Apricot and Almond, Chocolate and Caramel) the rhubarb one was definitely my favourite. The ‘Jing’ Japanese Sencha Green Tea was also very good and served at an appropriate temperature, which disappointingly is not always the case, even in the finest of restaurants. 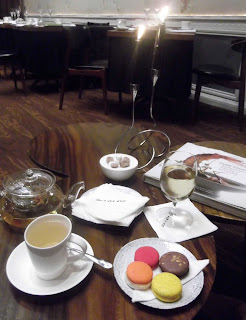 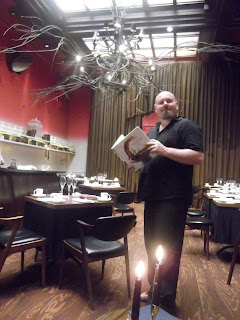 Over tea and a macaroon we fell in love: with each other all over again… and with Sketch. We hatched a plan to return for dinner next year but we could simply not wait that long, that’s why we booked for the evening!

9 Conduit Street, the Grade II Georgian townhouse where Sketch is housed, has a rich and varied history. If you are interested, it’s definitely worth Googling – or better yet, as we did, ask one of Sketch’s superbly friendly staff, such as front of house supremo David Kyle-Boyd to give you the grand tour and history lesson. It is great to be greeted by a host with such a genuine verve and enthusiasm to share his passion with guests.

When I am writing a blog post about a restaurant, I usually like to throw in a line or two about the décor, but with Sketch I could write two pages and still have only described the entranceway and reception area. Each of the rooms, individually designed, styled and bejeweled by the creative minds of restaurateur Mourad Mazouz, Pierre Gagnaire and a select group of emerging and acclaimed artists and interior designers, possess their own individual, yet harmonious vibe. Every aspect of the interior, from the original Georgian features; the evidence of the building’s previous occupants and Sketch’s additional modern embellishments are a visual delight. Sketch is the only restaurant where I have actually been excited by the toilets! Check the website. Look at the pictures. Believe the hype! A meal at Sketch satisfies all the senses.

‘The Gallery’ by day is a large gallery like space doing exactly what it says on the tin. By night, it is transformed into a hip and buzzing sensory attack of a restaurant. Still and moving images are projected 360º onto the walls. The soundtrack is hip. The clientele is hip. The atmosphere is buzzing. Everything is hip and buzzing and so wonderfully overwhelming… Is it still ‘hip’ to use the word hip?

To gain access to the Michelin Starred Lecture Room and Library (named after the room’s previous use by the Royal Institute of British Architects), you are led behind a red rope and up a dark ‘blood covered’ staircase, which, on reflection seems a little odd, but at the time is just one of the stimulating ‘arty’ superfluities that invade your senses. Another, waiting at the top of the staircase, sat a striking mirror-balled mannequin sporting a spiky ‘fro, formed from hypodermic needles. As interesting and inspiring as the art is, Sketch is first and foremost a restaurant and when the heavy wooden doors were dramatically swung open by David, our host, the most gorgeous and sumptuous dining room that I have ever seen lay before me. 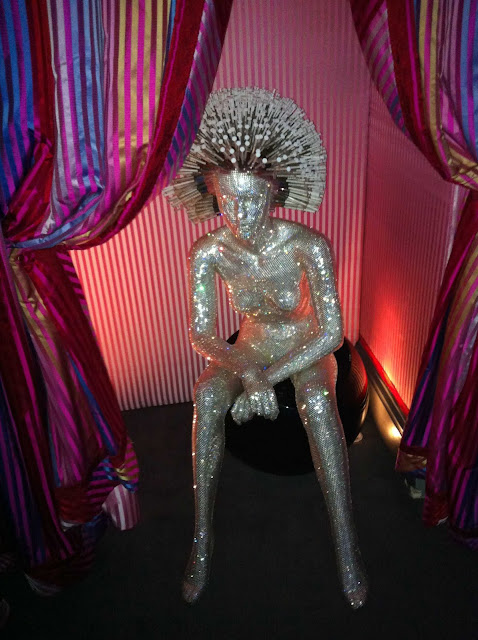 During ‘The Restaurant Inspector’ last night, it was discussed about how ‘less is more’ in a dining room and repainting the walls of the featured venue with white paint and muted colours. Sketch ignores these rules, with spectacular effects. If I was to describe the oranges, pinks, reds and yellows of the soft furnishings; the similarly coloured swirling and geometric patterned carpets and the wall coverings as being studded ivory leather, broad yellow bands and mirrored gold tiles, then you would probably imagine a garish and kitschy space with style over substance. The thing is, Sketch is garish, Sketch is kitschy but it has, in abundance, the style and the substance! Not many restaurateurs could pull this off; not many Chefs could pull this off; not many cities could pull this off - But Mazouz is not just any restaurateur, Gagnaire is not just any Chef and of course London is not just any city. Together they have created the most spectacular space to showcase the most fabulous food.

Both the lunch menus and the evening’s tasting menus started with the same amuse-bouches; which was great because at dinner I knew which ones I preferred and could save the best until last - First, I ate the Parmesan Sablé with Red Pepper; followed by the Rocket Financier; then the Seabass Sashimi with Melon, wrapped in Seaweed; saving the Goats Cheese Cream with Colombo Meringue for last. Each of them offered interesting flavour and texture contrast and showed off the chef’s delicate touch and technical skills. However, it was the subtle spicing and crumbly texture of the beautiful orange medallion of meringue coupled with the mildly tangy, creamy goat’s cheese was just delightful. 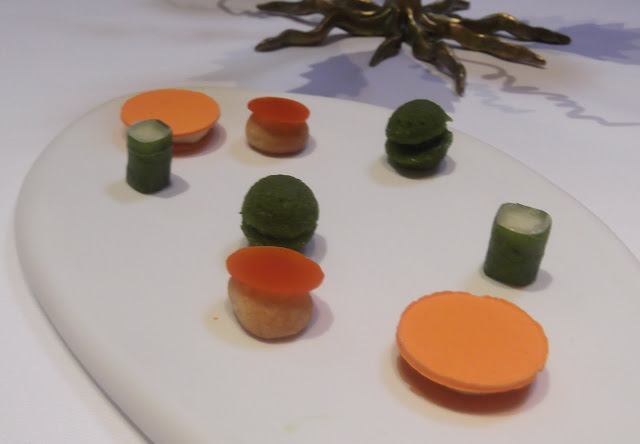 Also served as amuse-bouche were Nopli - Crunchy Vegetables with Cuttlefish and Sesame Seeds and Cumin Crackers with a White Artichoke Cream. Excellent appetisers that certainly whet the appetite for the main events. 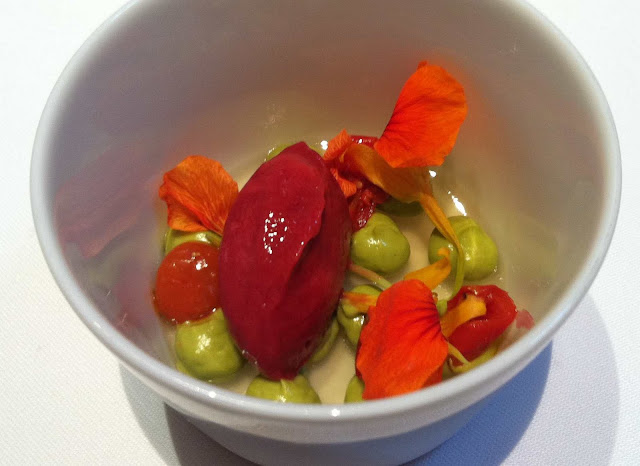 The lunch menu came with a combination of four starters. The Brie / Gingerbread / Apple / Beetroot Syrup was excellent. The heat from the ginger and the sweetness from the syrup worked fantastically well with the Brie. The Foie Gras / Red Pepper / Chocolate / Pane Carasau was phenomenal. Of the two of us, my wife is the bigger Foie Gras fan, but the red pepper, wafer thin crisp breads and disc of bitter chocolate really took it to another level. 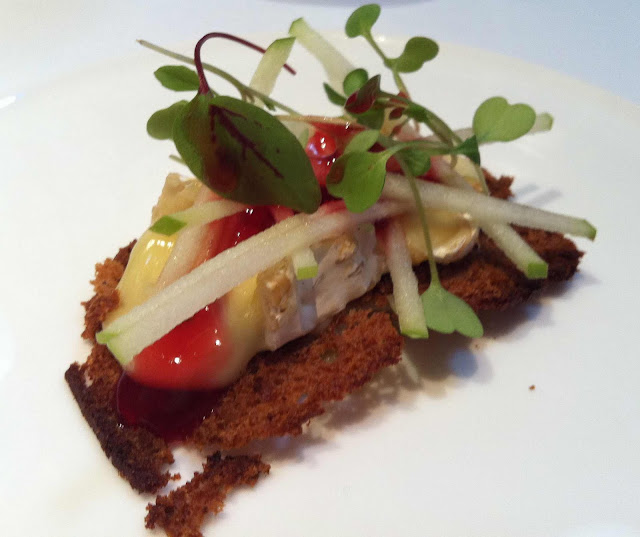 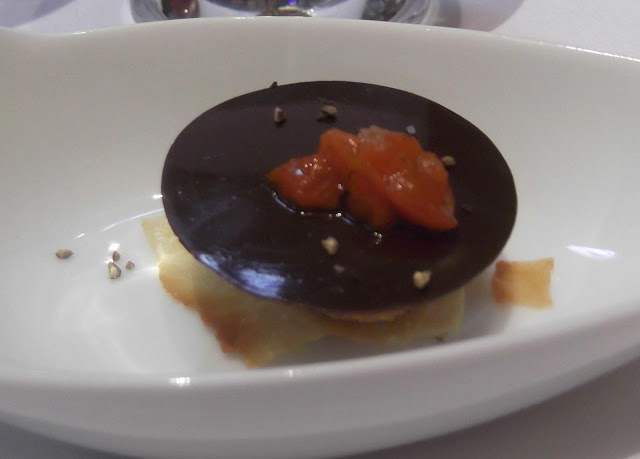 In the evening my wife chose to have the Tasting Menu, whilst I opted for the Vegetarian Tasting Menu. I am not vegetarian, but was swayed by the Morel and Asparagus and Heart of Mayfair dishes (and I knew my wife would give me a taste of all of hers anyway). 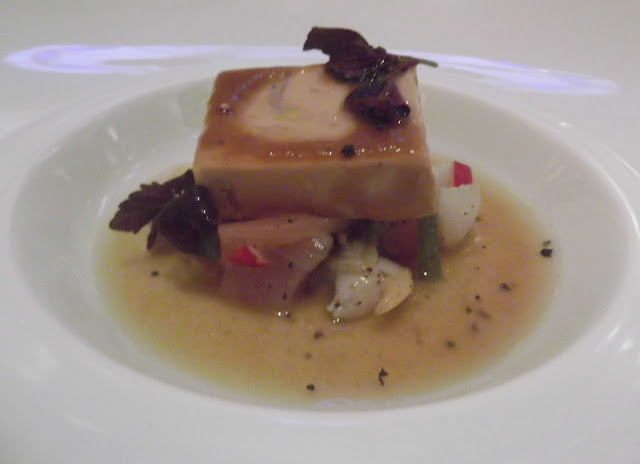 The Foie Gras was my wife’s favourite. However, of the tasters that she kindly gave me the stand out dishes were: the Stone Bass, which was so light and summery with a beautifully balanced smokiness from the lardons, and the Scottish Lobster – the tropical twist of the banana and mango bisque sauce, undercut with the warming ginger tricked my taste buds into thinking that I was sat eating this overlooking the Caribbean sea. 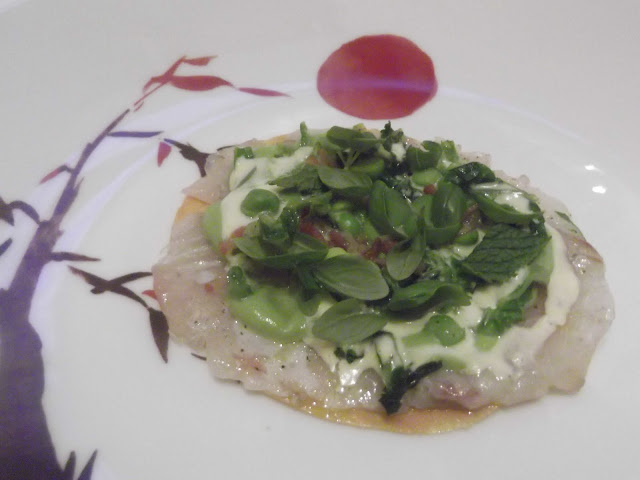 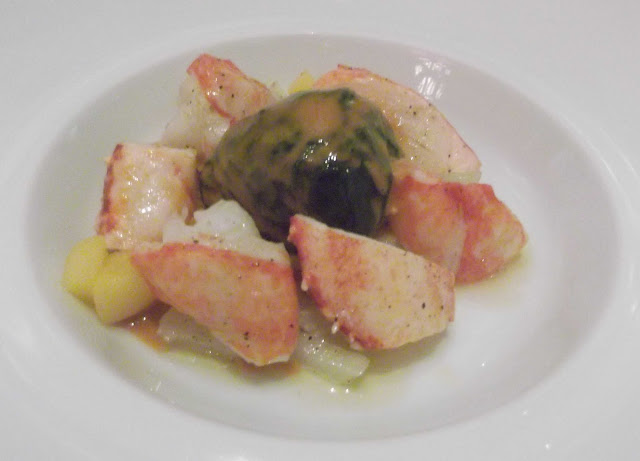 The most meritorious dishes from my vegetarian dégustation were:
Tomato – the greens and reds were so vibrant; the avocado and tomato so fresh and flavoursome; and delightful textures were provided by the crunchy French beans; the clear, fragrant tomato water jelly and the intensely refreshing sorbet. A lovely summery celebration of love apple! 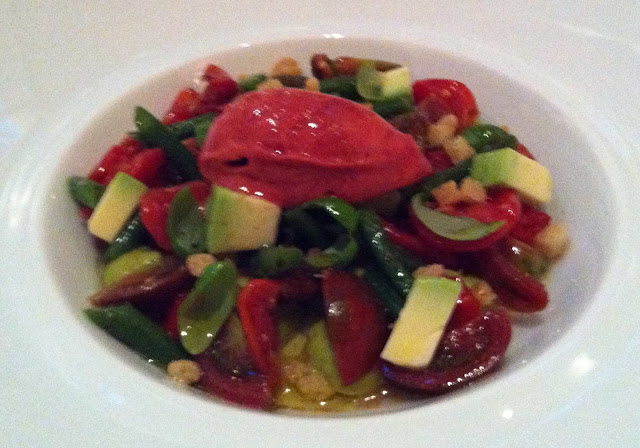 Morel and Asparagus – morels and asparagus are two of my favourite ingredients and late Spring sees them at their best; the pairing of the stronger flavoured, green asparagus and the more tender, slightly sweeter white asparagus was sensational. The rich Arbois wine bringing out the best from the earthy morels.
(For an easy dish to prepare at home, try steaming some morels in Arbois wine and serving them on some asparagus spears – a simple recipe using two seasonal ingredients, it will be tasty but will pale in comparison to Gagnaire’s fine dining version). 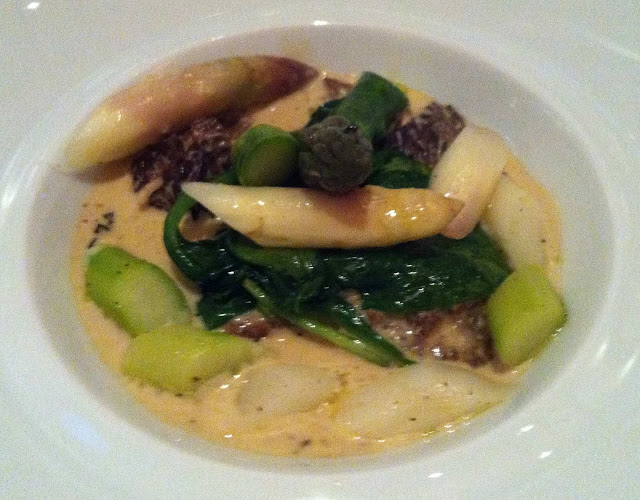 Other particularly memorable components of the meal were the nutty shards of cauliflower in the sketch Pancake and the Mint and Pepper Hollandaise espuma that covered the Vegetable Tartlet. (Espumas have their detractors but used well I think they are a great way of getting flavour and aroma into a dish, coupled with lightness. One of the best foams I have ever had was at Carles Abellan's Comerç 24 in Barcelona – an Oyster with Beetroot Foam - Simply divine!) 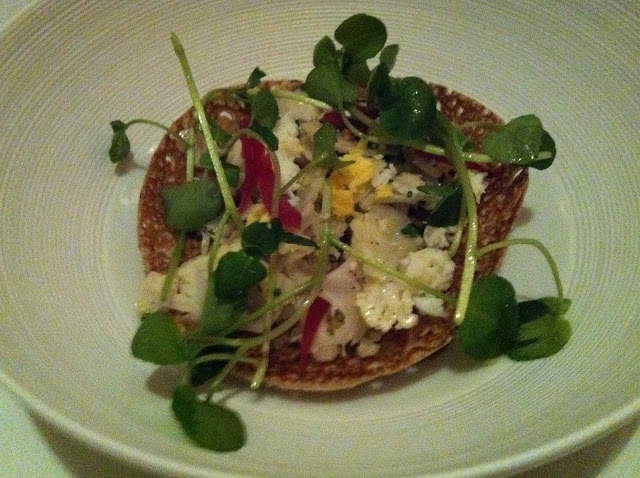 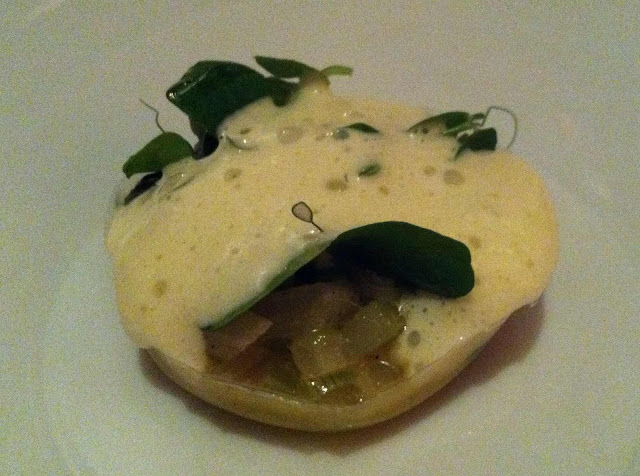 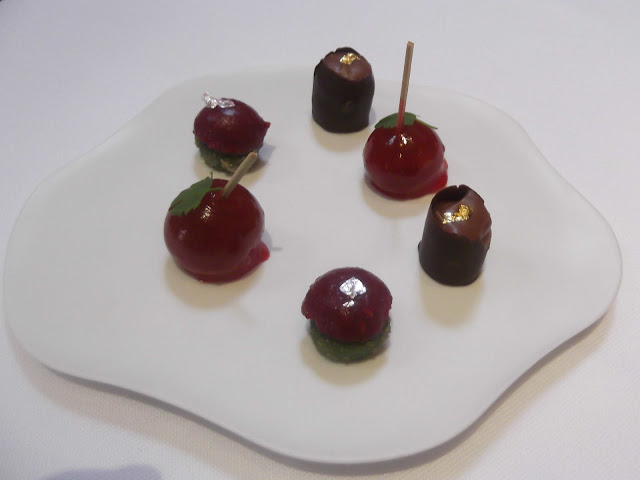 Each was indeed a ‘grand dessert’ – the grandest one in my eyes however, was the rhubarb dish. Sure, the ‘Strawberry Coulis’ tasted better but the flavour combination of Rhubarb / Black Olive Jelly / Shortbread / Mousseline Cream was enjoyably different. 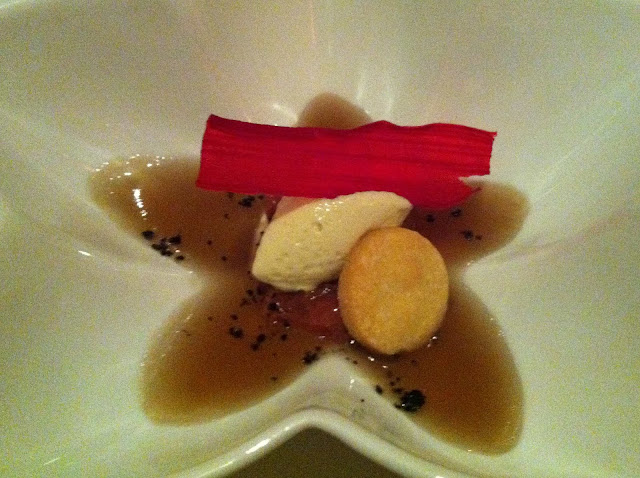 At lunchtime I opted for the Cheese Selection from Maison Mons, Roanne - with Sarasson Cream / Mostarda di Cremona / Crackers / Grapes Seasoned with Olive Oil and Maldon Salt. The Grapes were a triumph and something that I will definitely be trying to recreate. 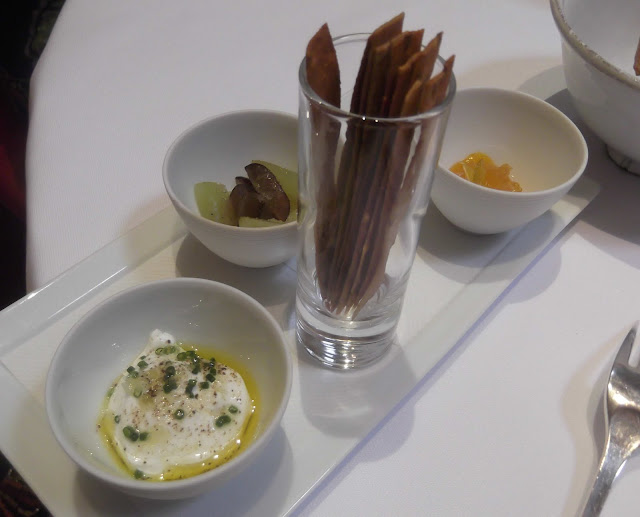 On our way out we noticed that Sketch is open from 8:00am for Breakfast – maybe next time we’ll go for the four meals and make a day of it!