With Yazz & The Plastic Population’s “The Only Way Is Up” blaring out of the cassette deck of his Ford Sierra RS Cosworth, I remember the day our family first got to meet my sister’s new yuppie boyfriend as if it were yesterday.

To my spotty teenager’s mind, the fact that he had a ‘car phone’ made him the coolest thing since Michael J. Fox’s hoverboard. With hindsight, I can only imagine what my dad thought of this ‘flash Harry’ knobbing his daughter.

To prove he had “Loadsamoney” (and obviously to win my parents over), the following week we were to be taken to the hottest ticket in town… a restaurant in Wandsworth called Harvey’s.

Some twenty-five plus years later, I now have my own ‘carphone’ (I’m yet to get a hoverboard) and Harvey’s has long since been replaced by Chez Bruce – a collaboration between Chef Bruce Poole and renowned restaurateur, Nigel Platts-Martin. Together they also own The Glasshouse in Kew and Chiswick’s La Trompette. Platts-Martin also co-owns The Ledbury – currently totalling five Michelin stars. 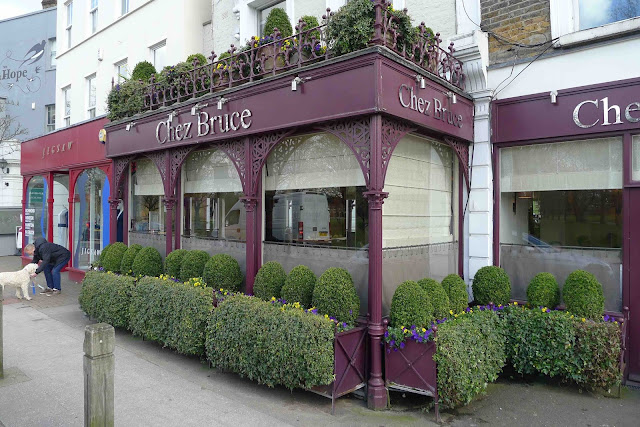 The head chef at Chez Bruce is Matt Christmas. A chef who has worked alongside Bruce Poole for over 10 years. During this time, the restaurant has retained its Michelin star (which it has held since 1999) and has been voted London’s Favourite Restaurant in the Harden’s guide for 11 years running – a pretty amazing achievement considering the volume of quality restaurants in the capital. As we arrived at what could be considered the perfect neighbourhood restaurant, I could see why.

The lunch menu cost £29.50 for 3 courses (+ supplement for the monkfish) but the kitchen also sent a soup and extra course (the eel). 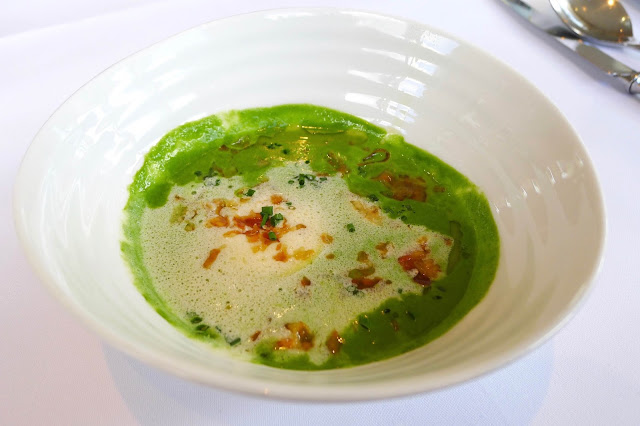 Wild garlic soup, goat’s curd tortellini & smoked bacon cream – starting out, this vibrant, colourful dish was treat for the eyes as well as the palate. I liked that that soup still retained a garlicky rawness – an invigorating harshness that was hearteningly rustic but with a refined edge. 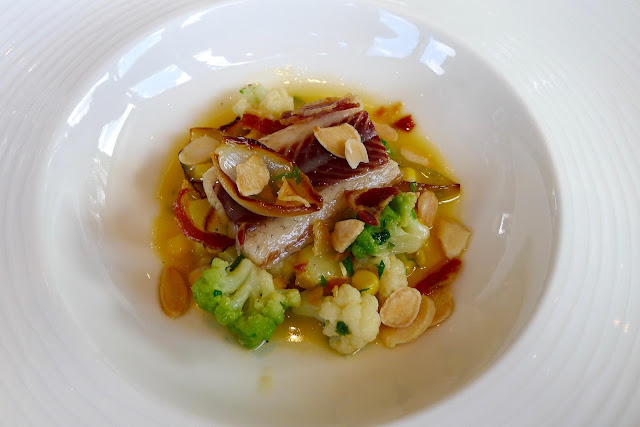 Smoked eel with sweetcorn & bacon casserole with almonds & brassicas – this was a lovely, light, elegant dish. Not only a textural triumph, individually there was a real clarity of flavour to each of the ingredients yet a wonderful synergy when eaten together. 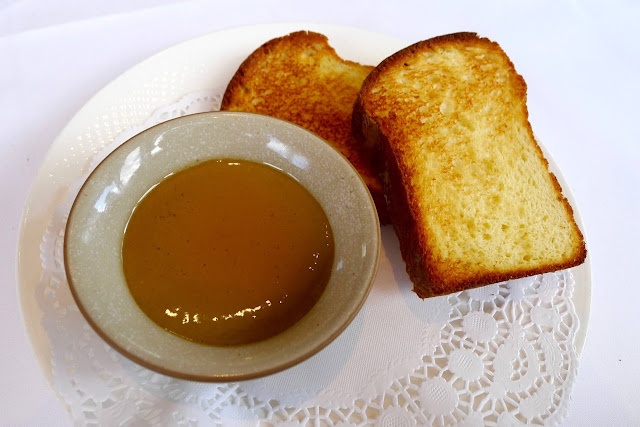 Foie gras & chicken liver parfait with toasted brioche – when done well, as this was, you can’t beat a simple classic like this - alluringly unpretentious, full of flavour and exceedingly satisfying. I was particularly impressed that it came served on a doily #oldskool 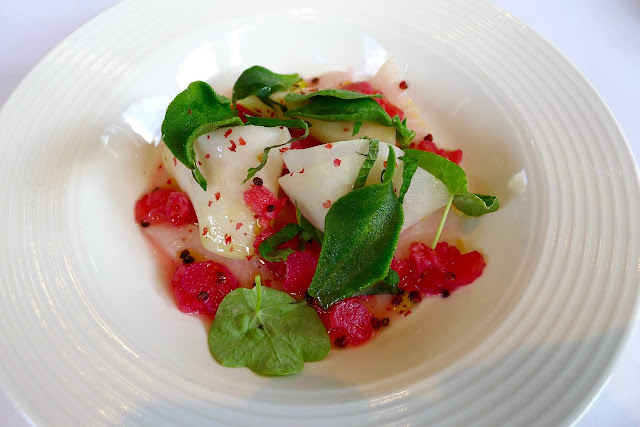 Hake sashimi with pickled rhubarb, pink peppercorns, shiso & ginger – my wife’s choice, this was the one dish that didn’t quite live up to promise. We both felt it a little lackluster – perhaps it was good that the hake’s flavour was not compromised in anyway but to our minds the other flavours just didn’t sing. 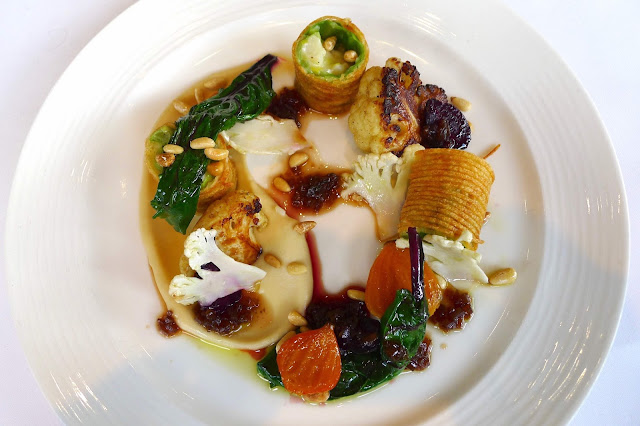 Cauliflower cheese croustillant with cabernet sauvignon vinaigrette, cauliflower purée & baby beetroot – my wife went for the veggie options and what a corker it looked too. As usual, I managed to filch a taste – it was perhaps a little sweet for my taste. More importantly, my wife was very happy with the dish – especially textually thanks to the pine nuts and the croustillant. 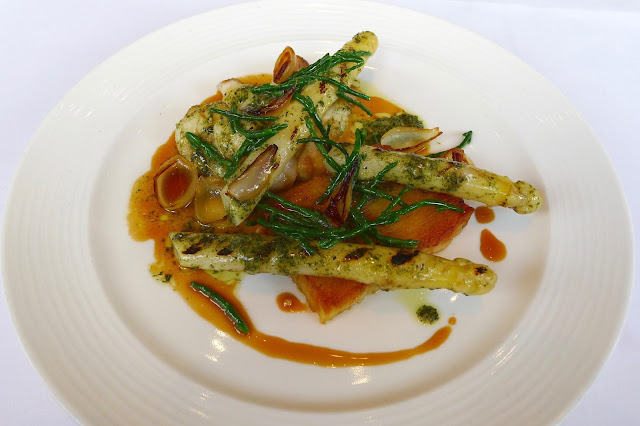 Monkfish with white asparagus, seaweed butter, pommes sarladaise, meat juices & samphire – if I see white asparagus on a menu I’m pretty much guaranteed to order it. I struggle to put into words why I like it so much, I suppose it has to do with its subtleness. Enrobed in seaweed butter, it was heavenly. The pommes sarladaise were equally delightful – a dish prepared with great skill and understanding. 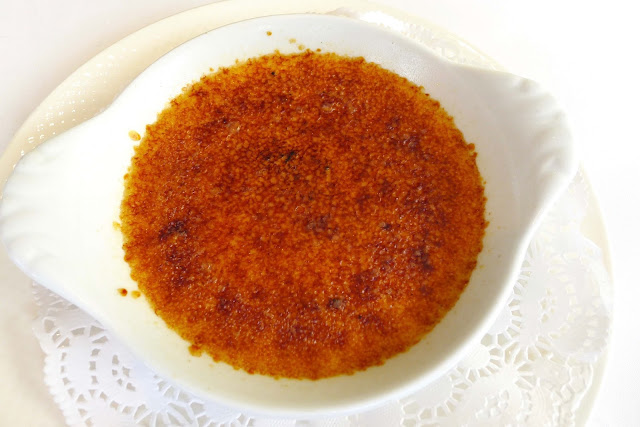 Crème brûlée – my wife is the Crème brûlée expert and she was well happy. It’s one of the few desserts that I don’t get a look in when it comes to having a taste. 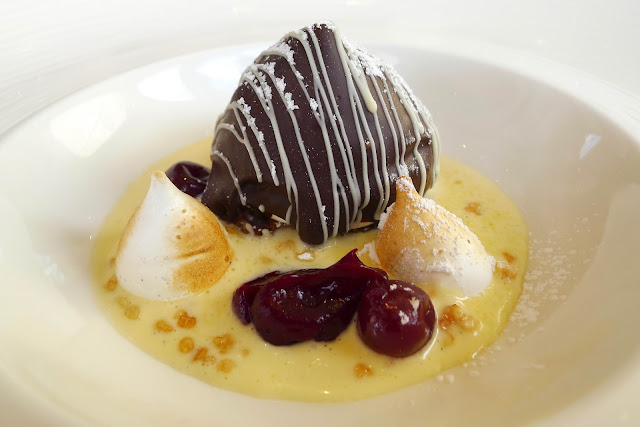 Cherry & almond chocolate teacake with toasted marshmallows & kirsch – the joy from cracking through the chocolate on a teacake to reveal the marshmallow sheltered within is always a pleasure. Add to this mix a silky almond custard, cherries and a hint of kirsch and you have an elegant dessert of classical flavour combinations. 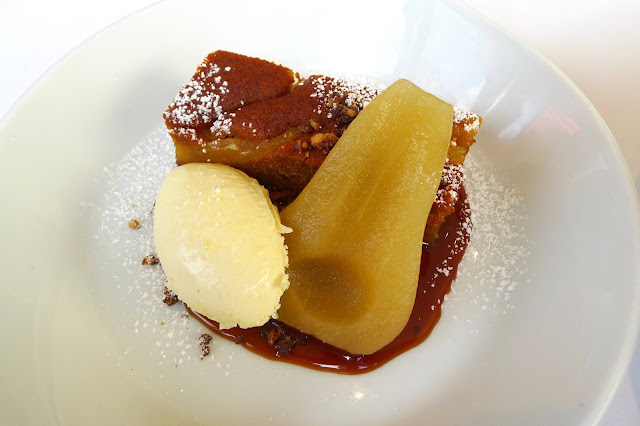 Let’s hope I don’t leave it another 25 years to return… although, by then, I may have that hoverboard.