#RestaurantWars: The Battle for Manchester

For those that haven’t seen or heard of it, ‘Restaurant Wars: The Battle for Manchester’ is a BBC2 (8pm Mondays) behind-the-scenes documentary series which aired its first episode last Monday.

Filming follows these Culinary Commanders as they rally their troops and fire food at their targets throughout the planning and opening stages of the ‘battling’ The French and Manchester House.

Making a brief background appearance on the show at the opening night of The French and having eaten at Manchester House during opening week, I visited both restaurants once again this week to see how ‘the battle is developing’… yarbles did I!

I visited both restaurants because I’m on half term and wanted somewhere good to eat in the city.

It would be all too easy, tiresome and predictable to continue prattling on giving you tedious war puns; talk about how each chef may or may not have been portrayed and edited differently from their usual day to day personalities and comment on the use of the phrase ‘funk button’ by one of Manchester House’s ‘branding gurus’…

Instead, I’ll share with you the best thing about these restaurants opening in Manchester… the food! 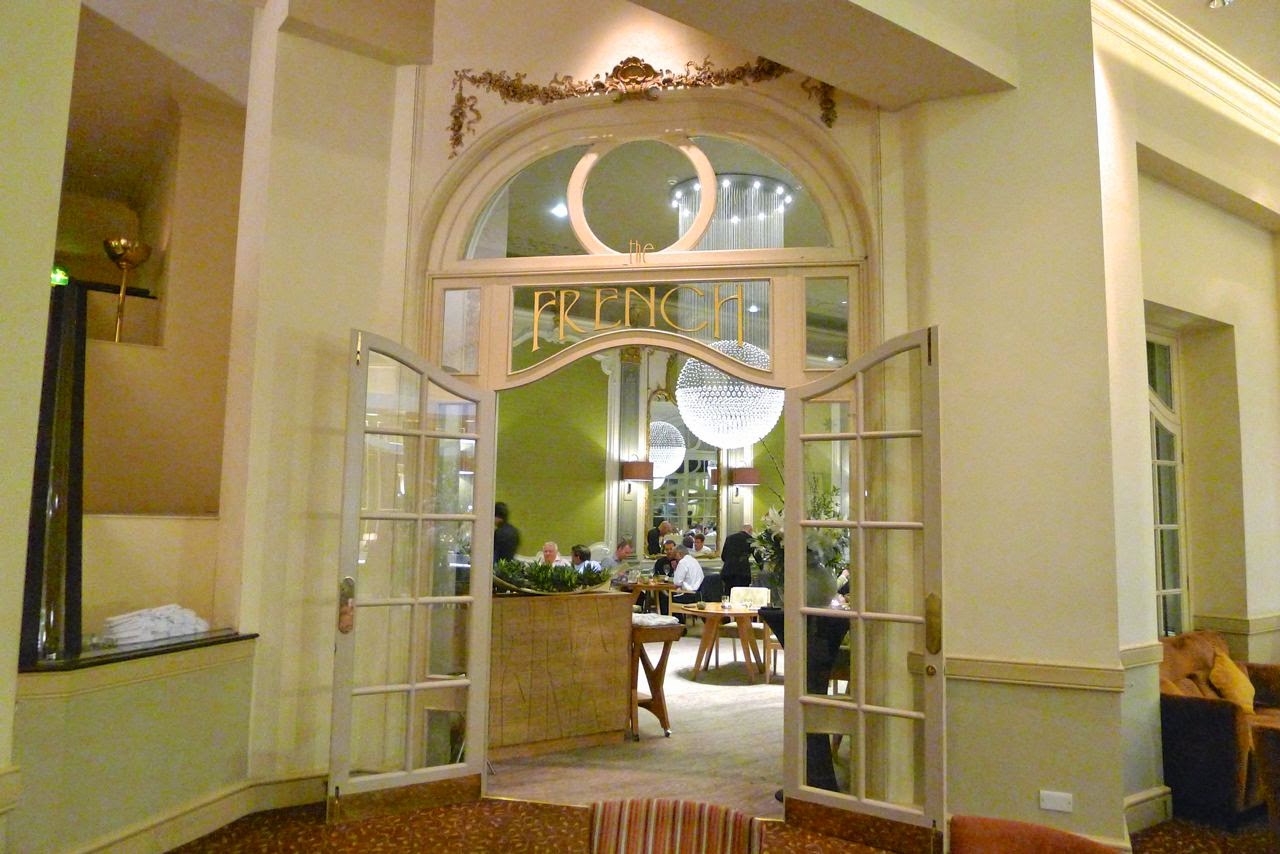 Dinner at The French by Simon Rogan: 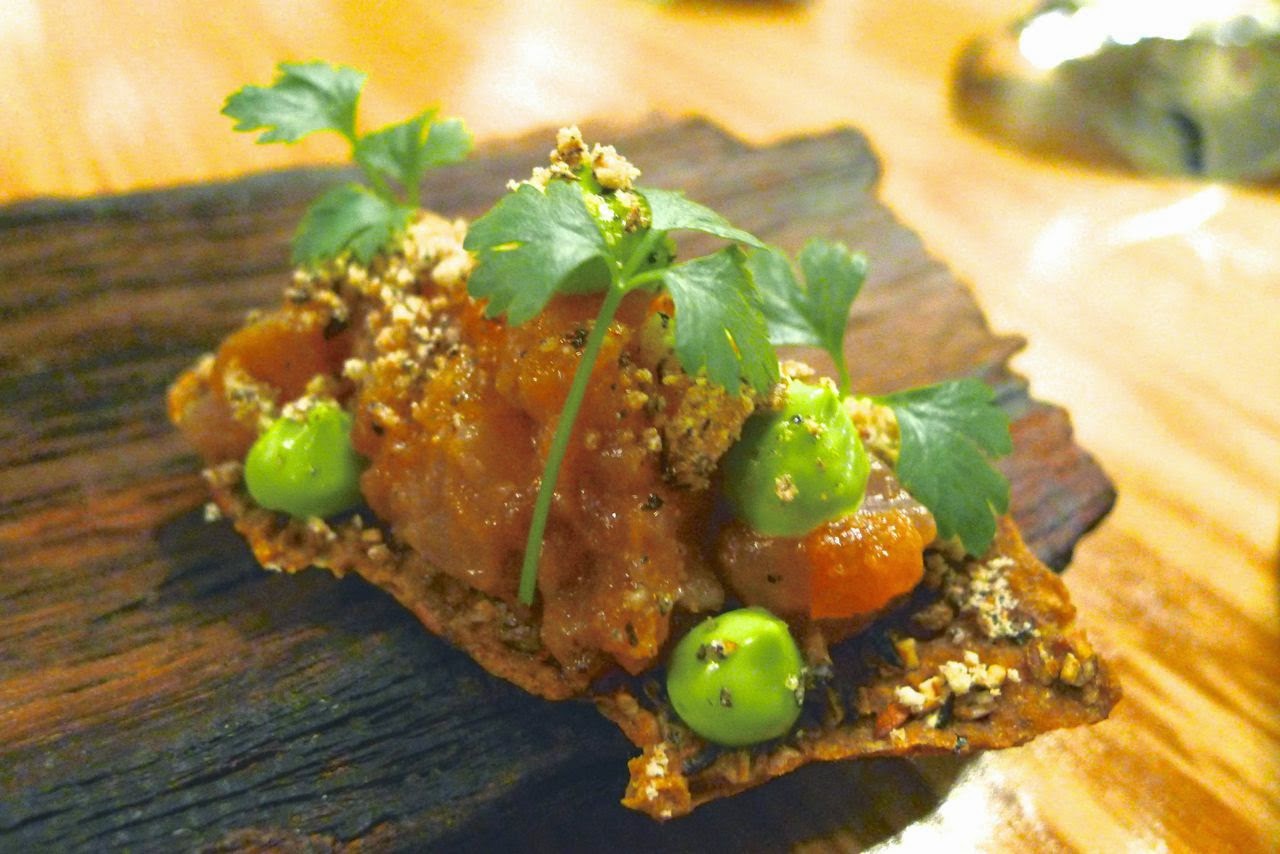 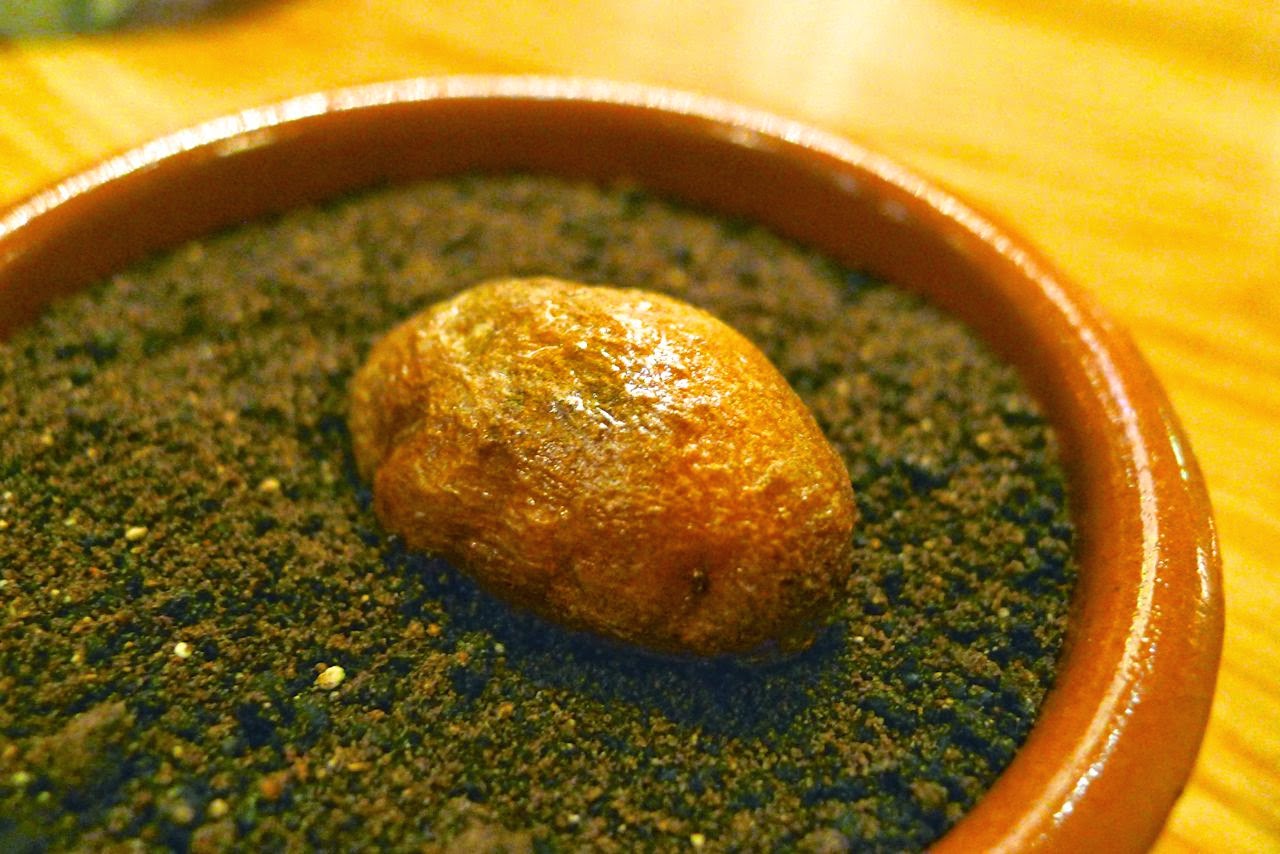 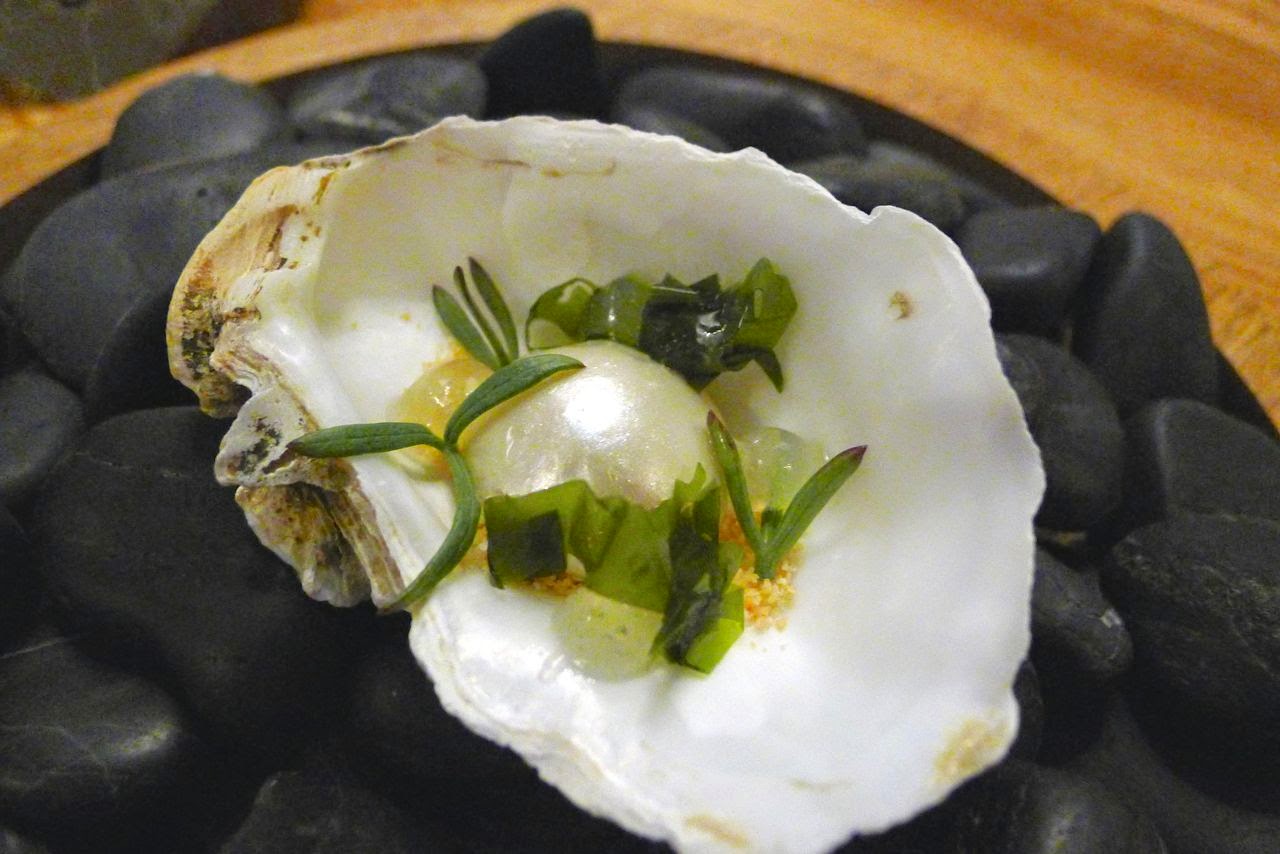 Celeriac and apple – the most striking of the canapés, what looks like a large pearl set in the oyster shell is actually a celeriac cream coated in an beautifully iridescent layer, decorated with sea herbs, apple puree and a ‘sea water’ gelée. 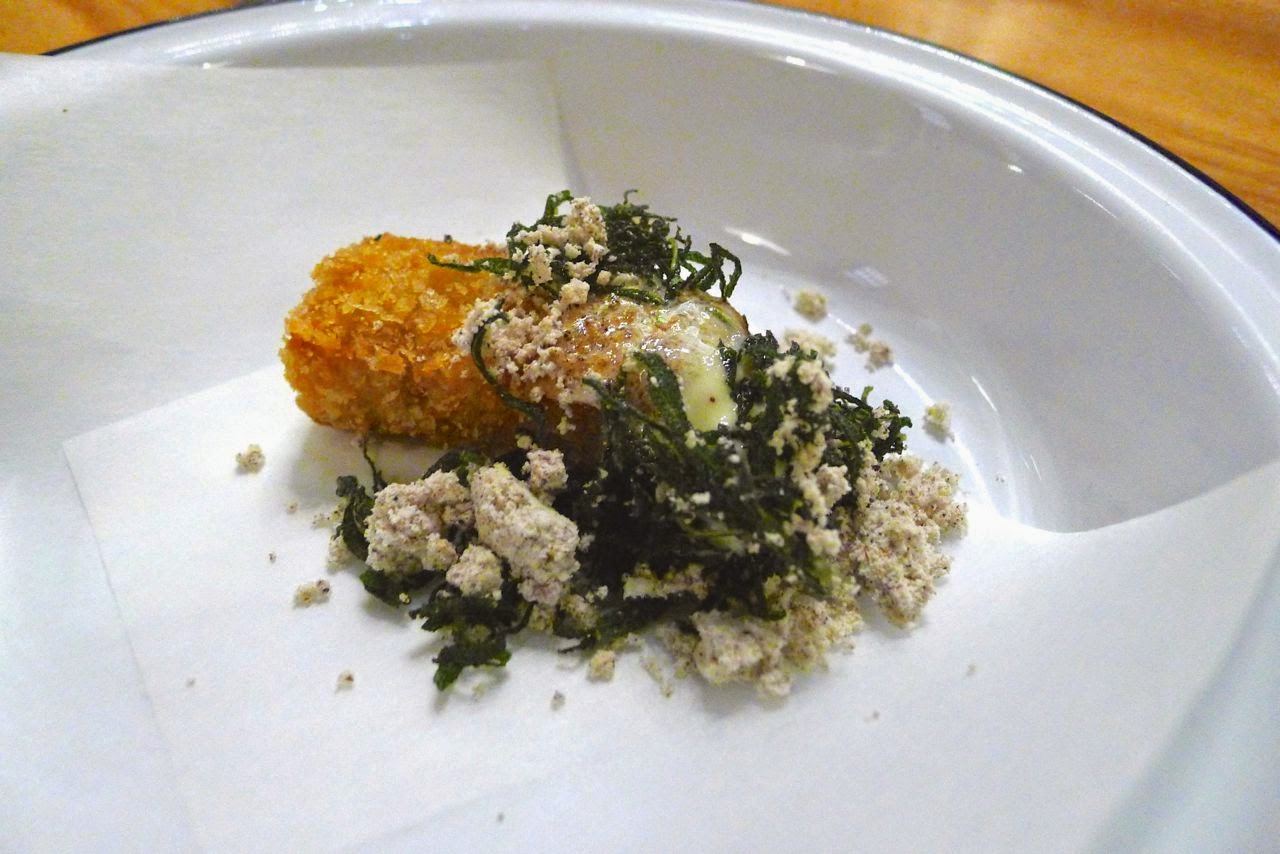 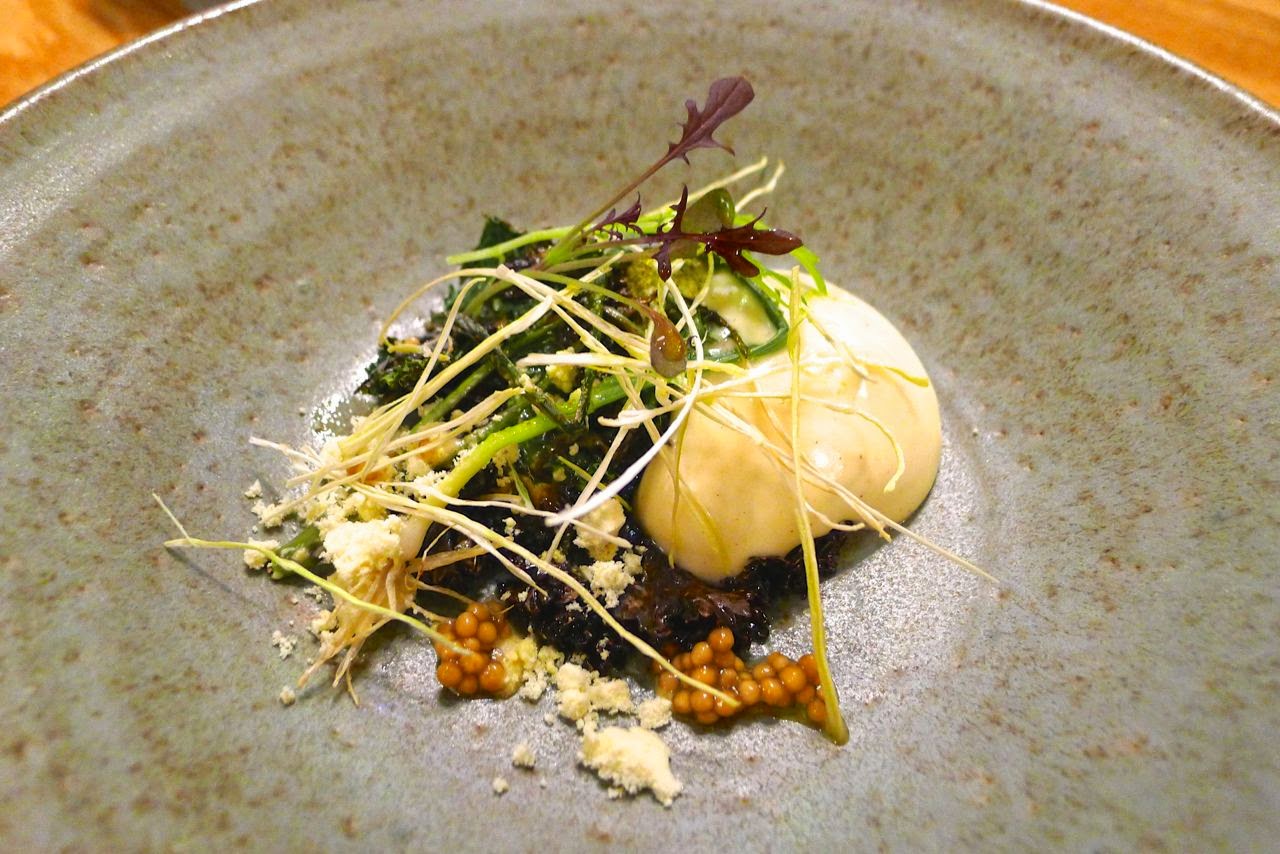 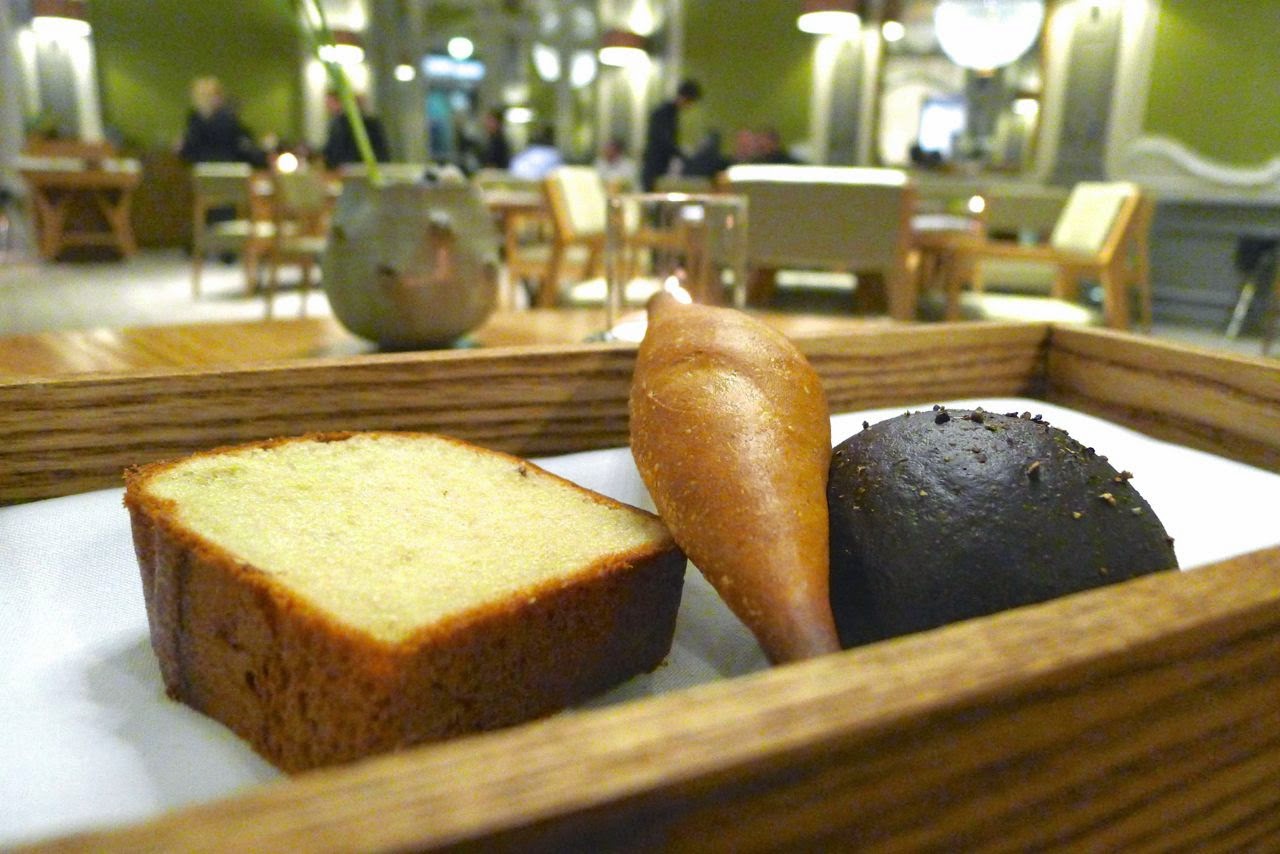 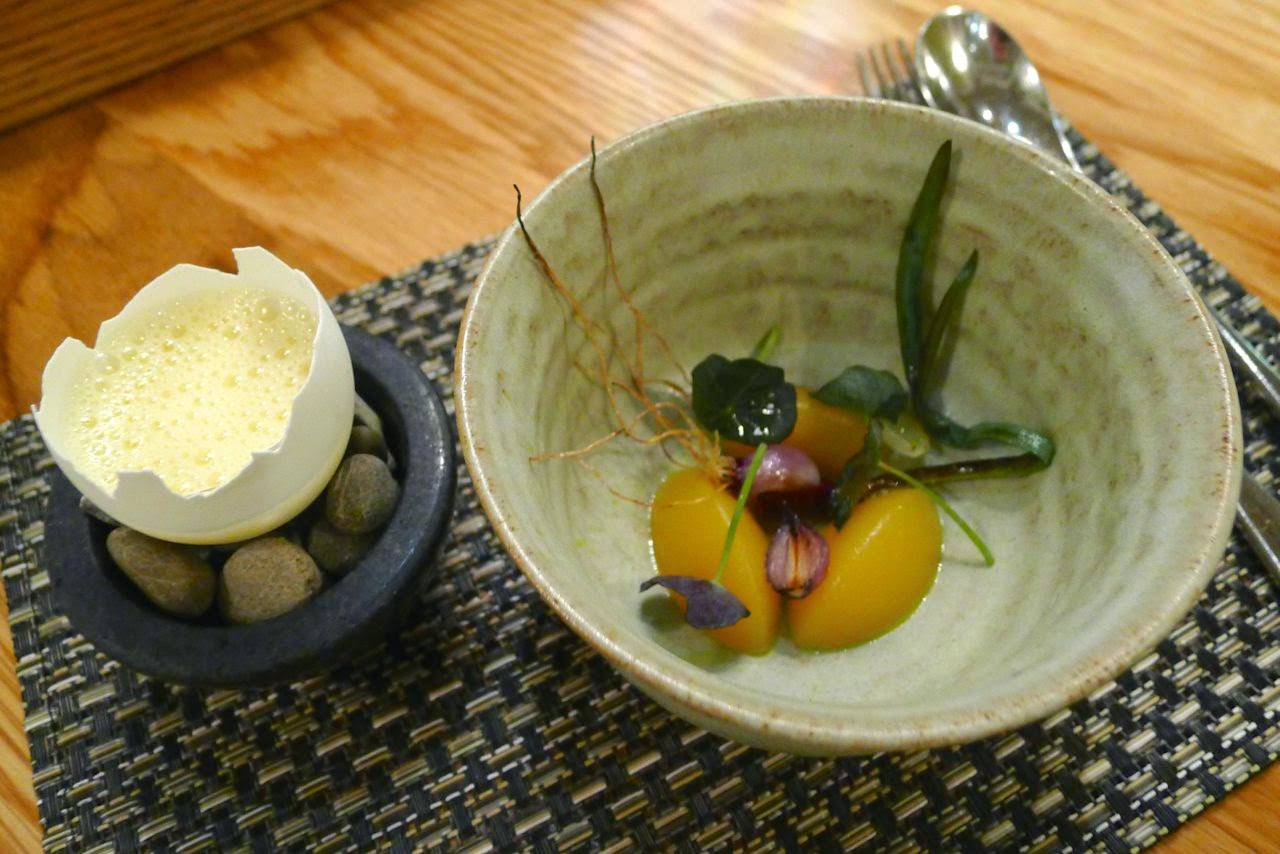 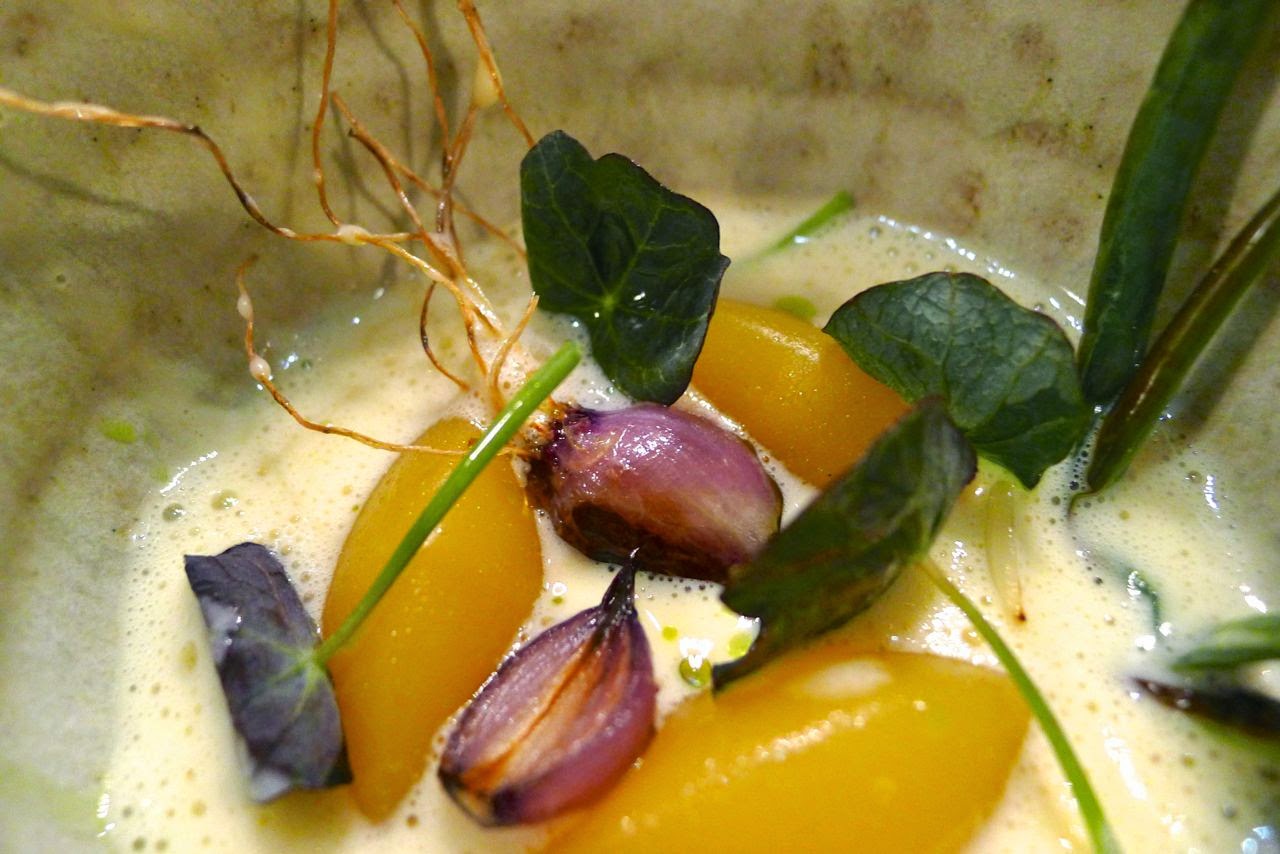 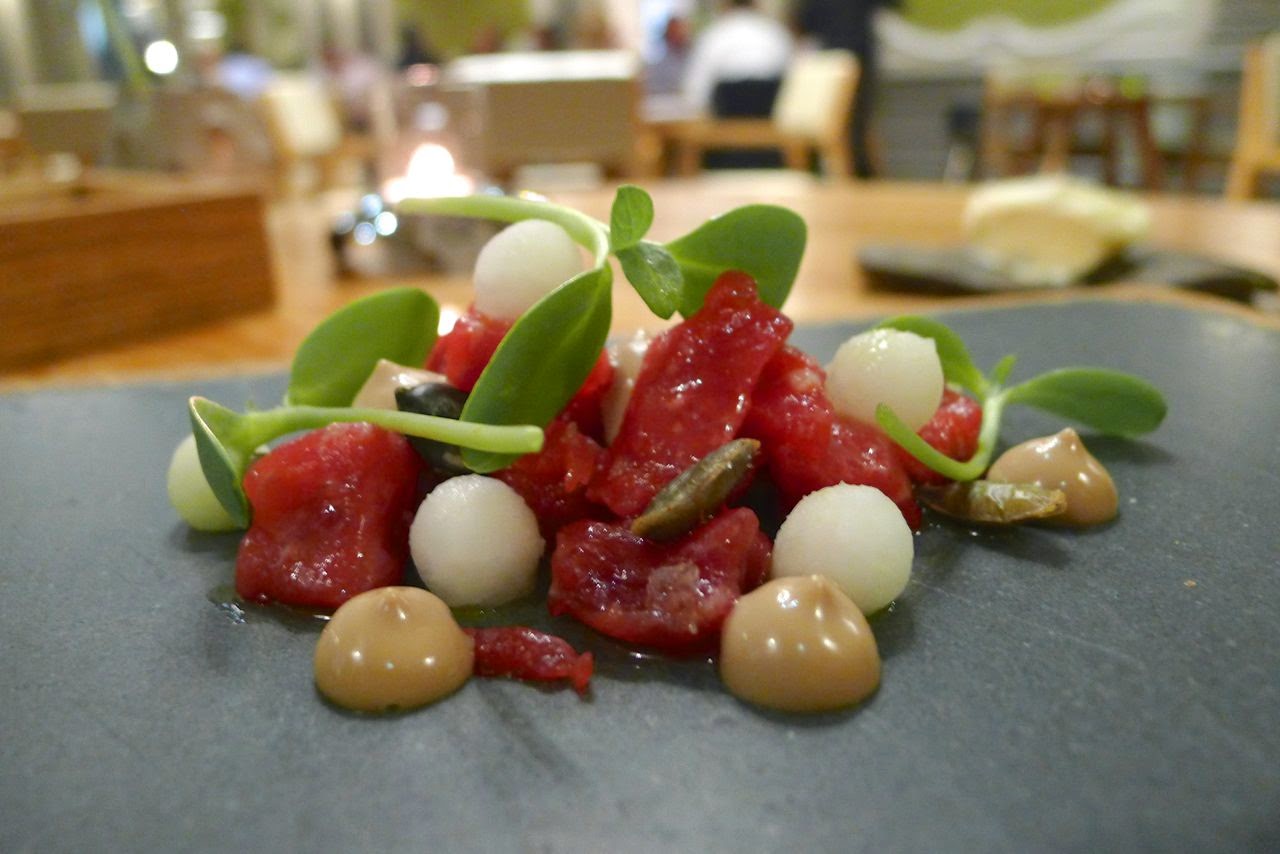 Ox in coal oil with pumpkin seed, kohlrabi and sunflower – on Thursday I ate at L’Enclume where they serve the similarly presented but completely different ‘venison tartare’. Both are exceptional dishes but I’d like it noted for the record that, after much deliberation, I prefer The French’s ox… I’m keen to taste what Simon Rogan’s Fera at Claridge’s version will taste like. 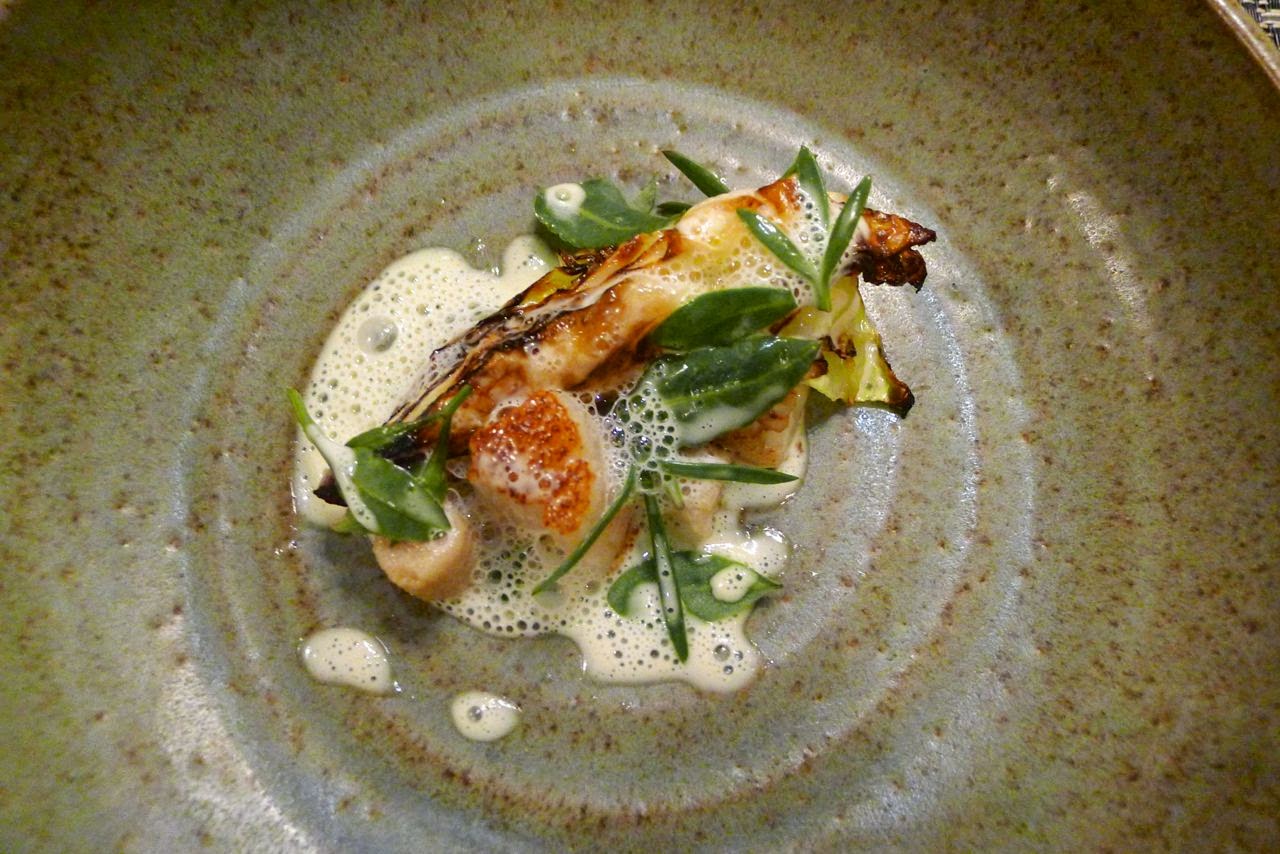 Caramelised cabbage, scallops, coastal herbs, smoked roes – this dish is one that has remained on the menu for quite some time; a perfect marriage of flavours – the sweet cabbage and scallops with caramelisation for added flavour and texture; smokiness of the roes; salty grassy notes from the sea herbs all caressed in light frothy scallop sauce. 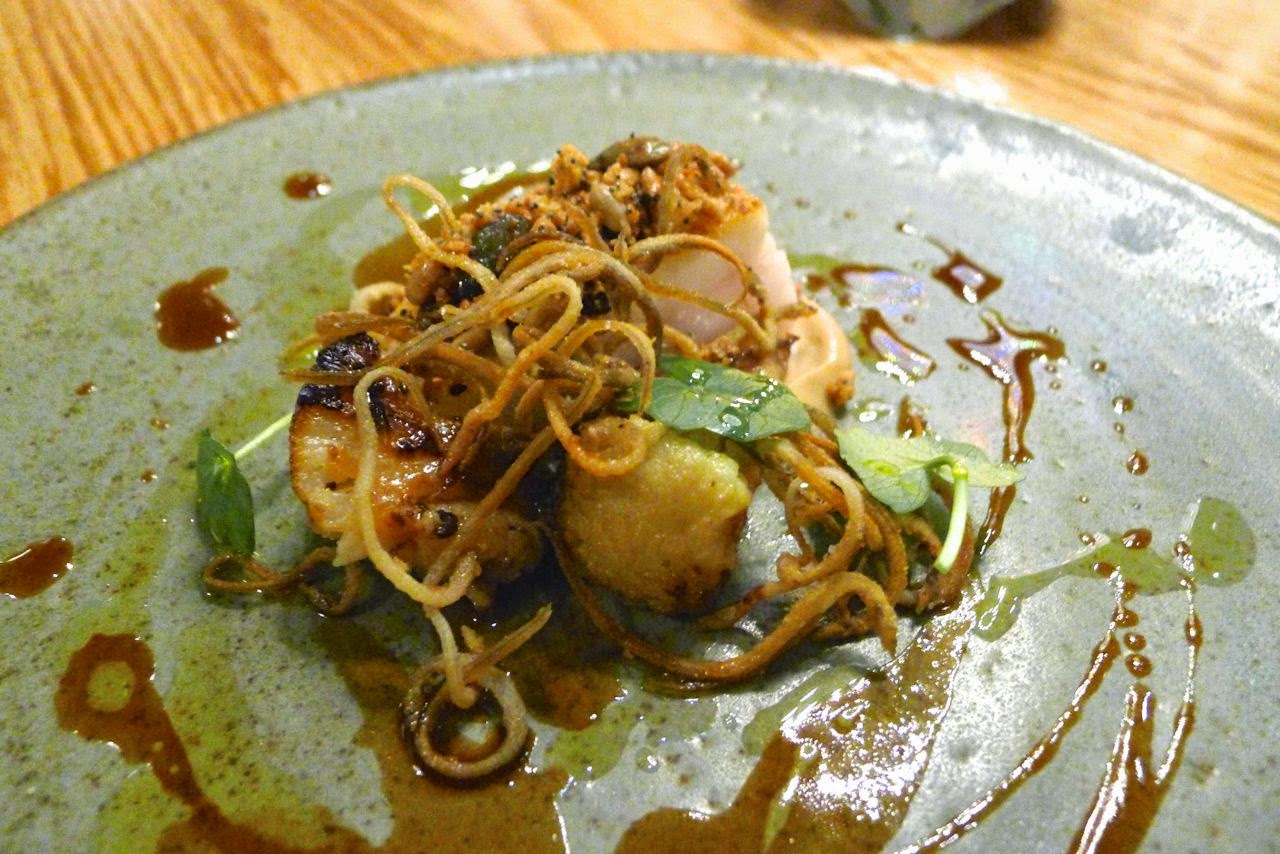 Roasted hake with seeded breadcrumbs, roasted cauliflower and crispy elvers – a piece of hake which had been given just the right number of seconds cooking to whiten its flesh but leave it silky; texture coming from the seeded crumb and crispy elvers. Elvers from Glass Eels were once popular on menus (probably around the time of The French’s heyday) but dwindling numbers pushed their price up to beyond that of caviar… hugely increased populations over the last couple of years have once again made them sustainable and viable for restaurants. 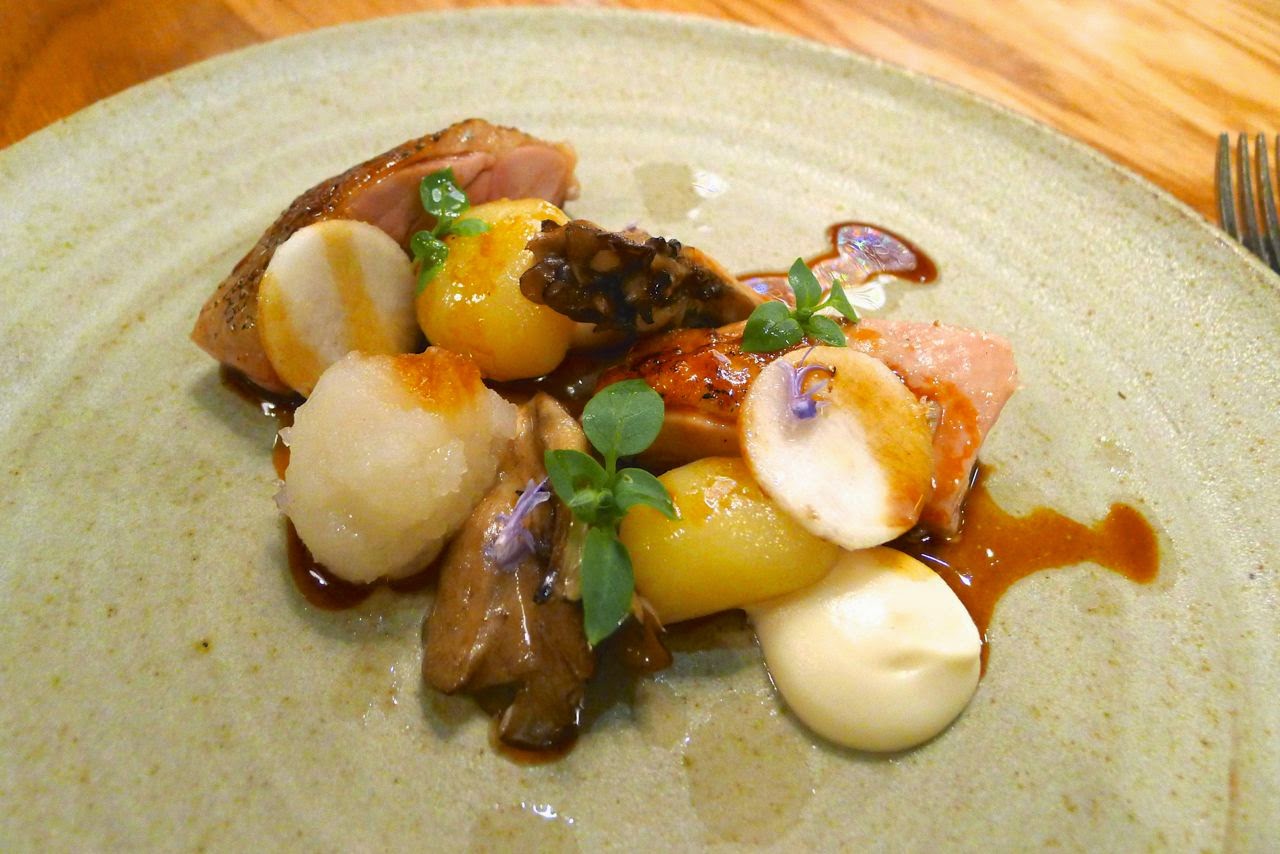 Reg’s guinea hen, bacon fat potatoes, turnips, hen of the woods and rosemary – perfectly cooked, excellent quality meat served with rich, indulgent potatoes, discs of and grated salt baked turnip, butter fried hen of the woods mushrooms and a classically prepared sauce where you can taste the bones and hours of work. 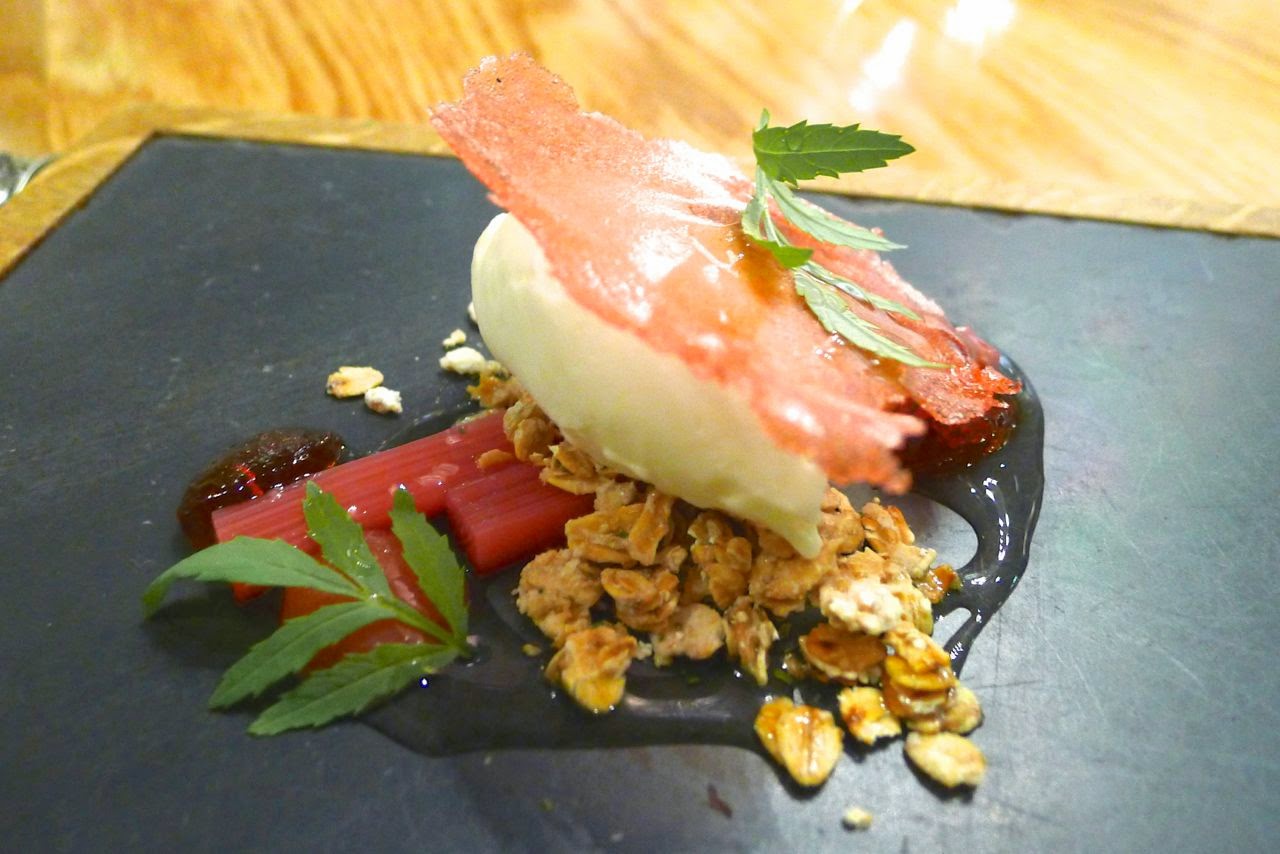 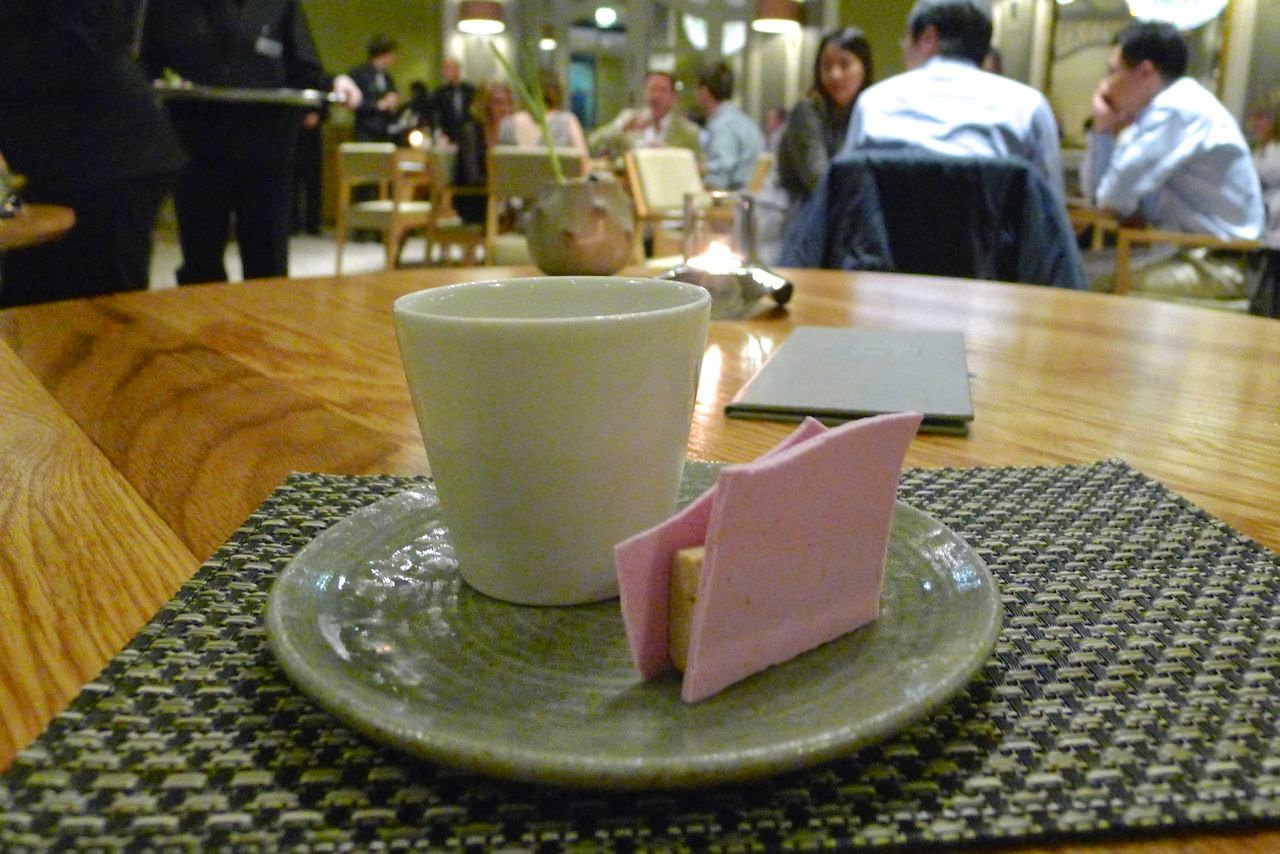 Sass ‘n’ Soda – the usual end to another great meal at The French. 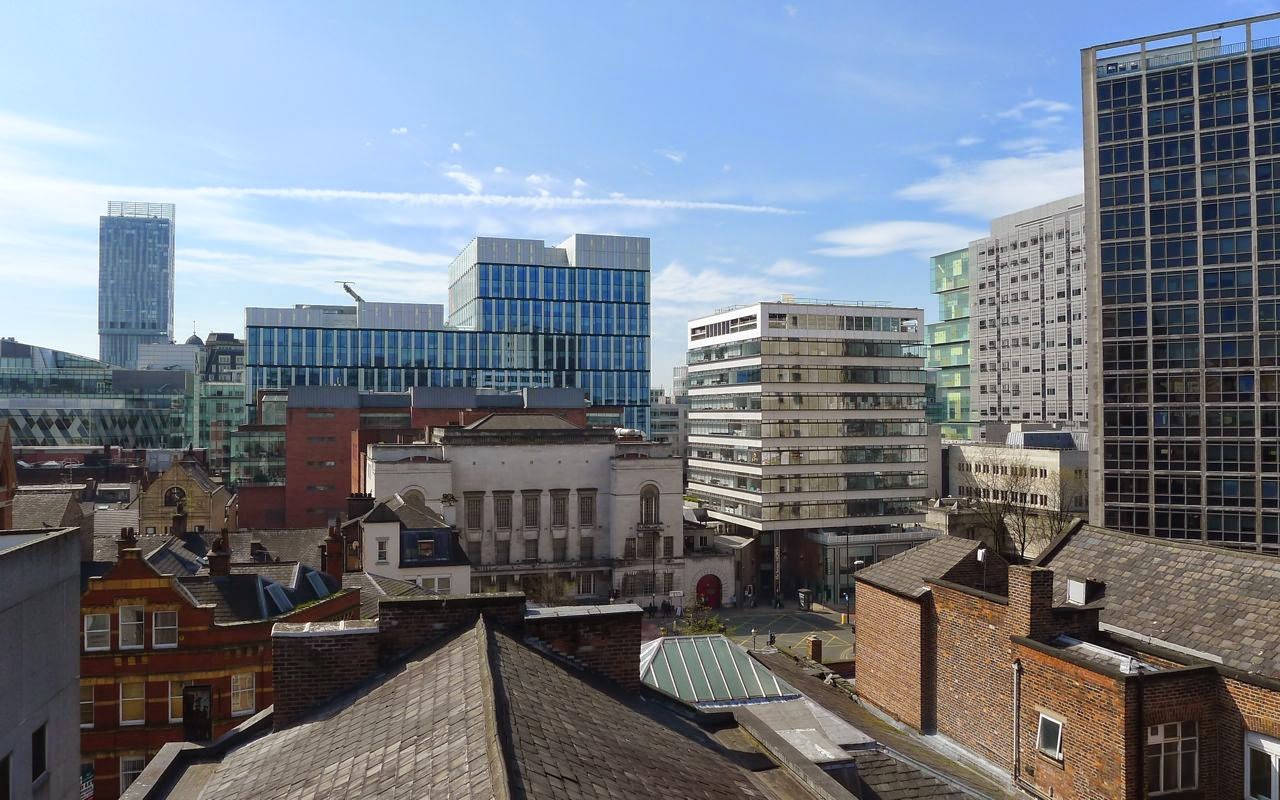 Meanwhile, across the city… Lunch at Manchester House: 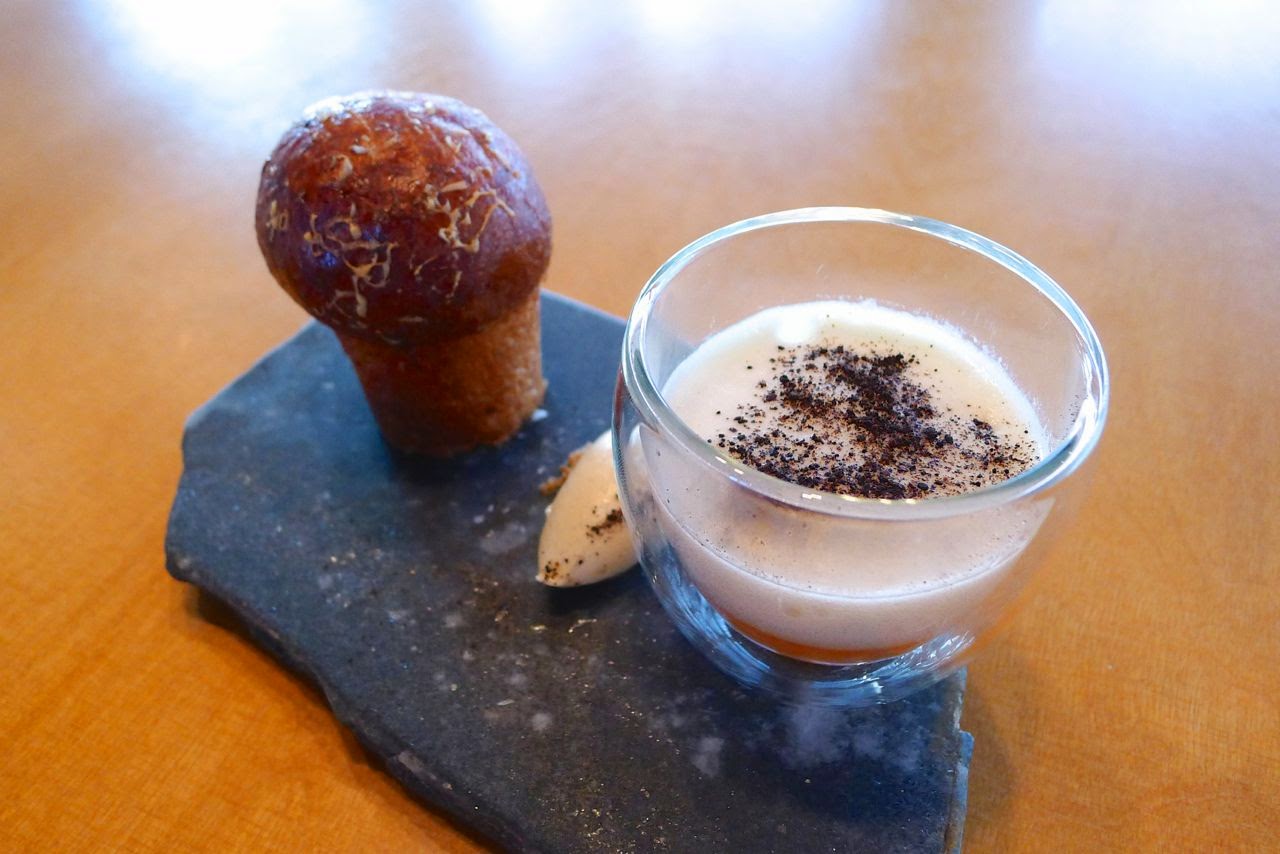 Parmesan and onion brioche – the dinky brioche is very good and I liked the creamy espuma topping on the onion consommé but it would be interesting to know if the ‘consommé’ is made in the tried and tested classical way or with some fancy pants distillation machine from charred onions as the main thrust of ‘flavour’ seemed to come from smoke and charred onion powder as opposed to onion. 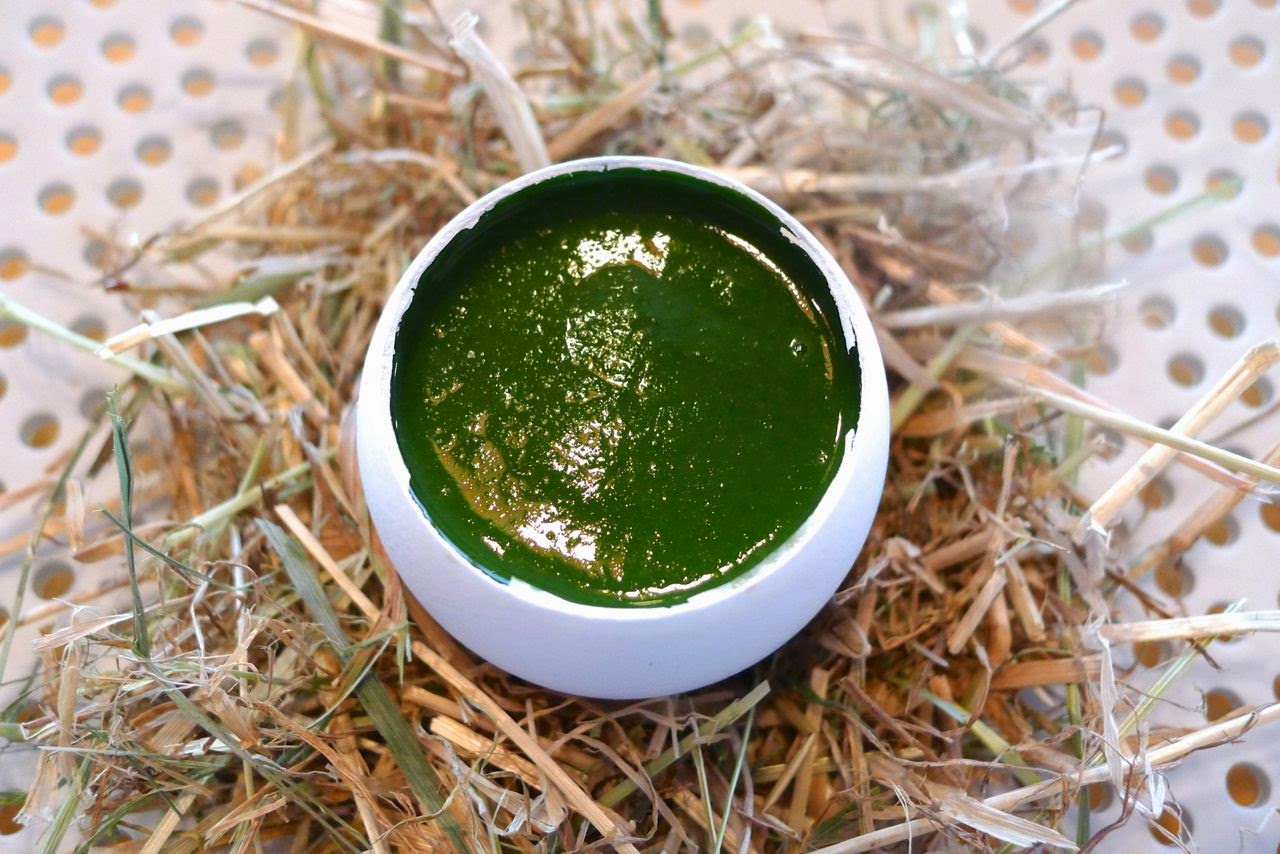 Duck confit, watercress and turnip – this is a dish that I very much enjoyed; with the rich duck confit and smooth watercress purée there was a hint of Armagnac in there and a spark of acidity from a tiny dice of pickled turnip. Delightful. 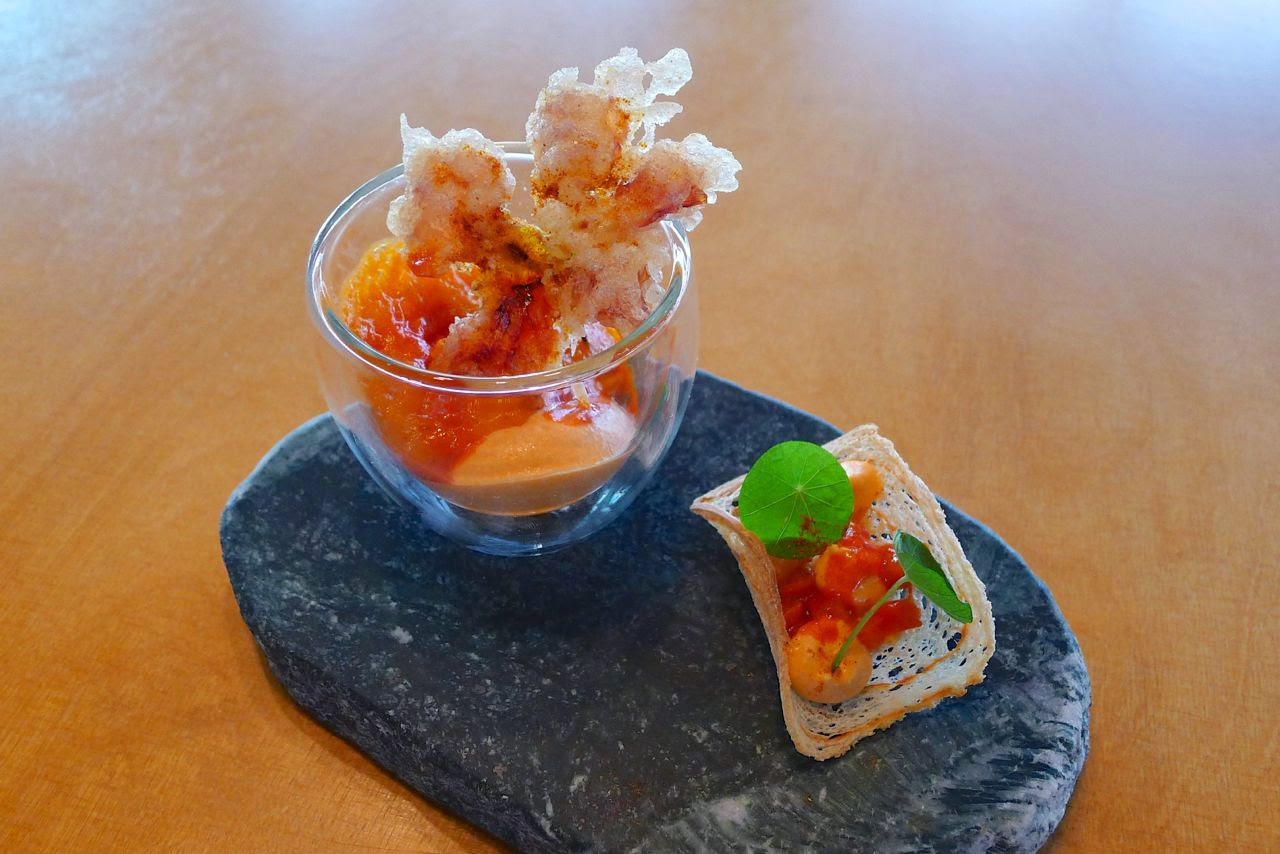 Red pepper, rose and nasturtium – another enjoyable canapé; the tempura batter on the nasturtium flower was perfectly crisp. Also good, although appearing in numerous technical forms, the flavour of red pepper remained relatively pure. I particularly enjoyed the burst of caper that came from a spherification (but the question remains, would an actual caper have delivered the same?) 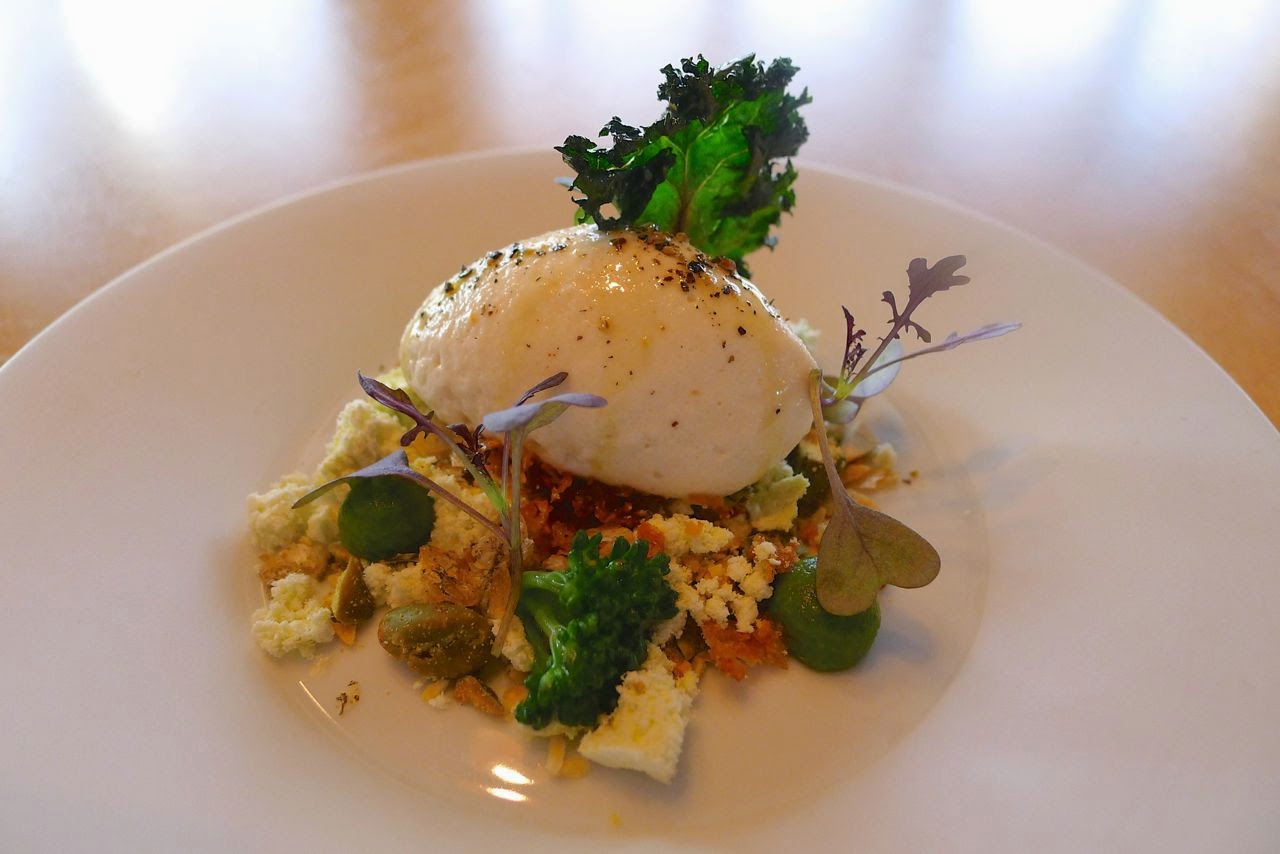 Salt cod mouse with almonds and broccoli – a mousse, delicate in flavour with a light airy texture buoyed by the crunch of nuts, crumb and brassicas; despite this being what owner Tim Bacon would call a ‘feminine dish’, it was the one I enjoyed the most. 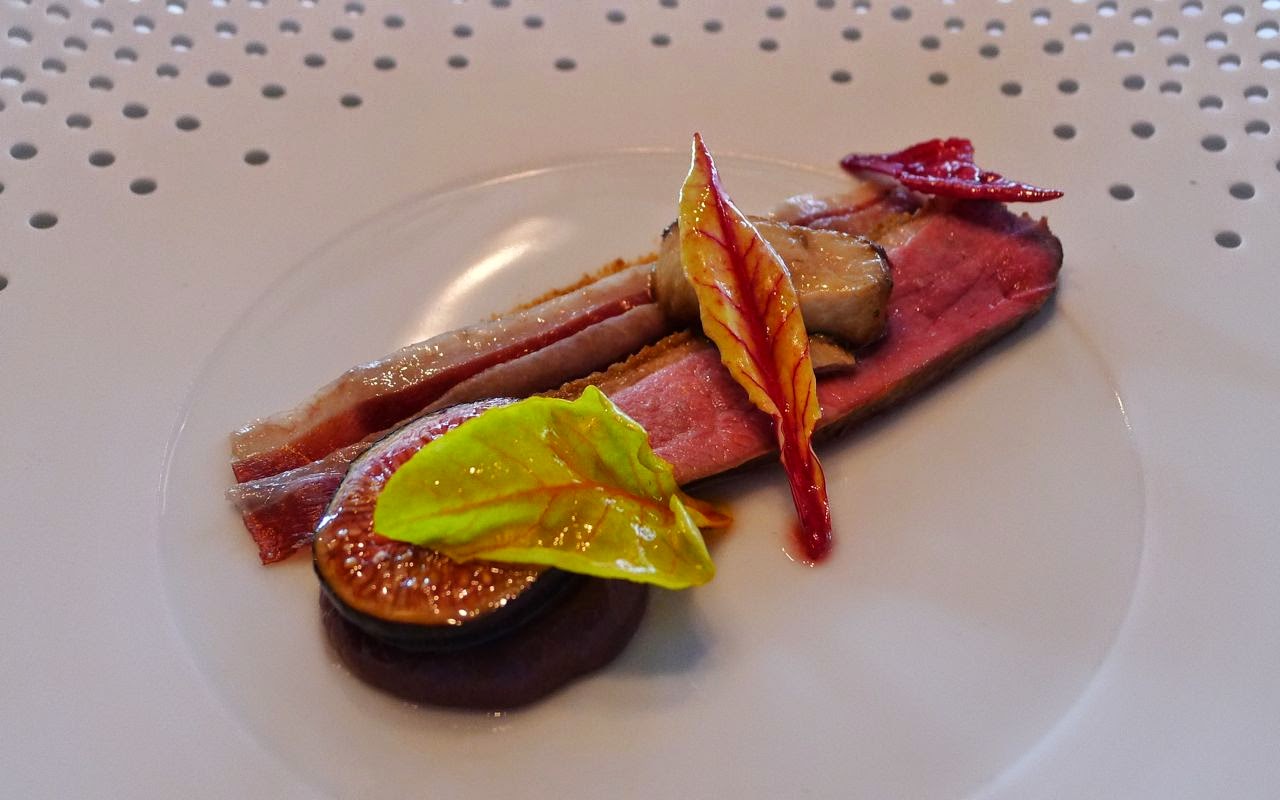 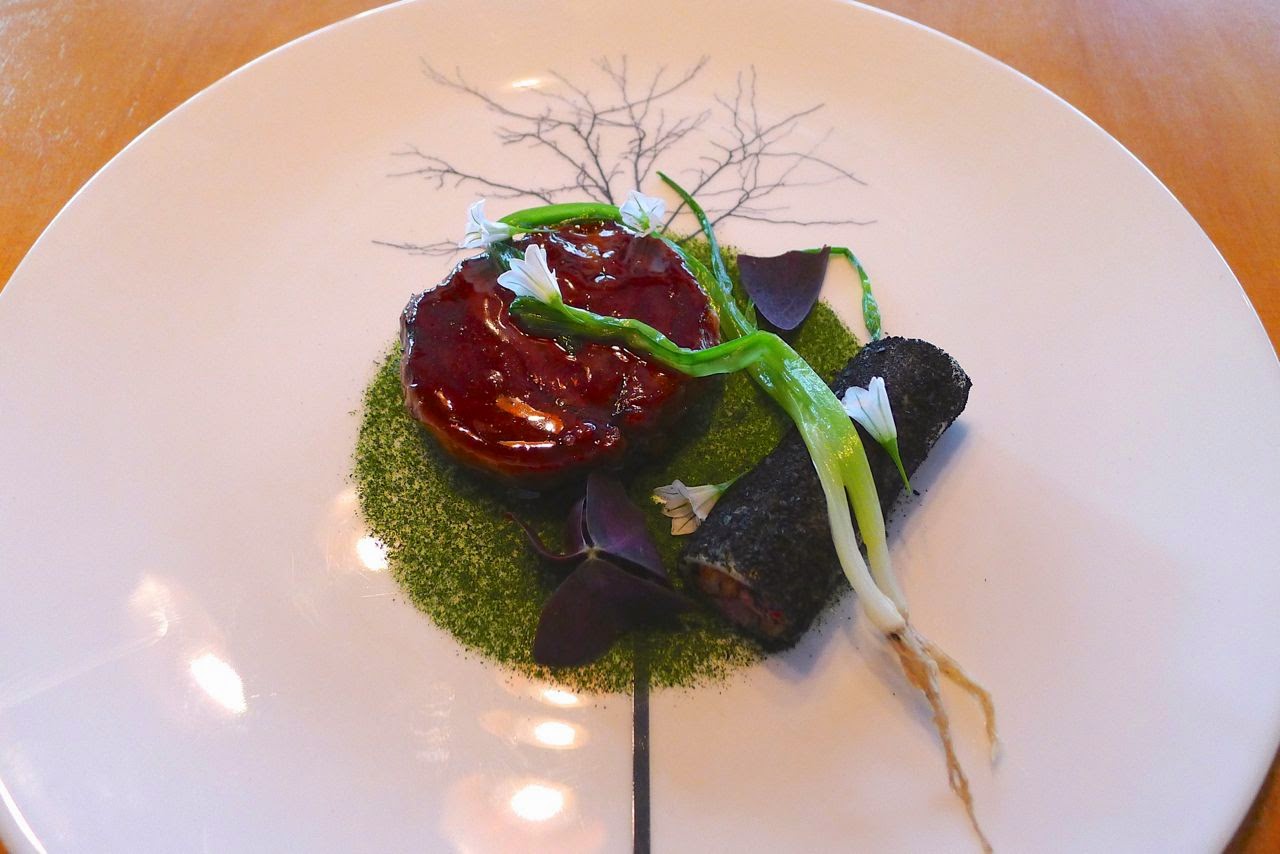 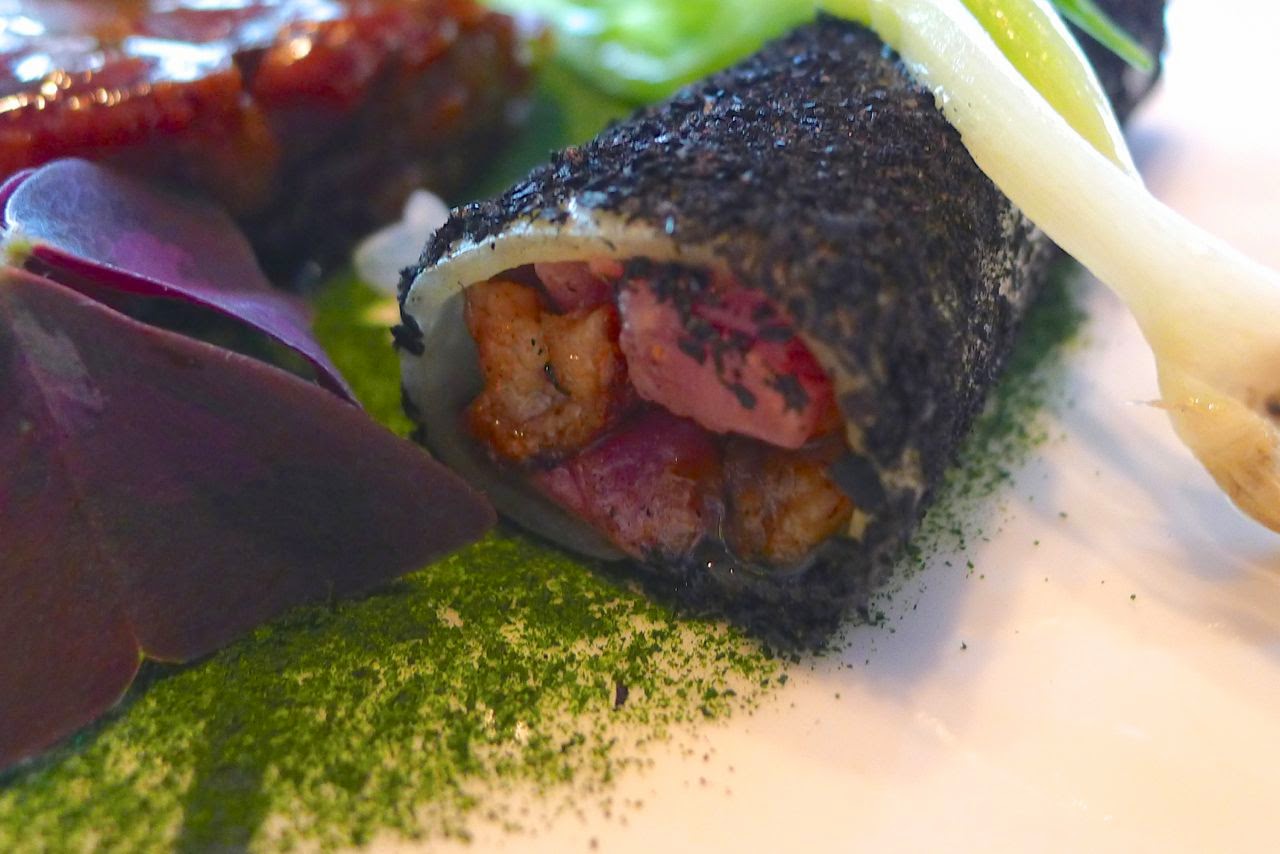 Braised lamb breast, wild garlic, lamb fillet tartare and young leek – a visually stunning dish; the braised lamb breast with its rich sticky glaze was delicious and I enjoyed the wild garlic powder and the citrus burst from the purple oxalis. The element that did not work for me was the leek cannelloni in which the subtlety of the lamb fillet tartare and diced sweetbreads was lost under the weight of the charred powdered coating. 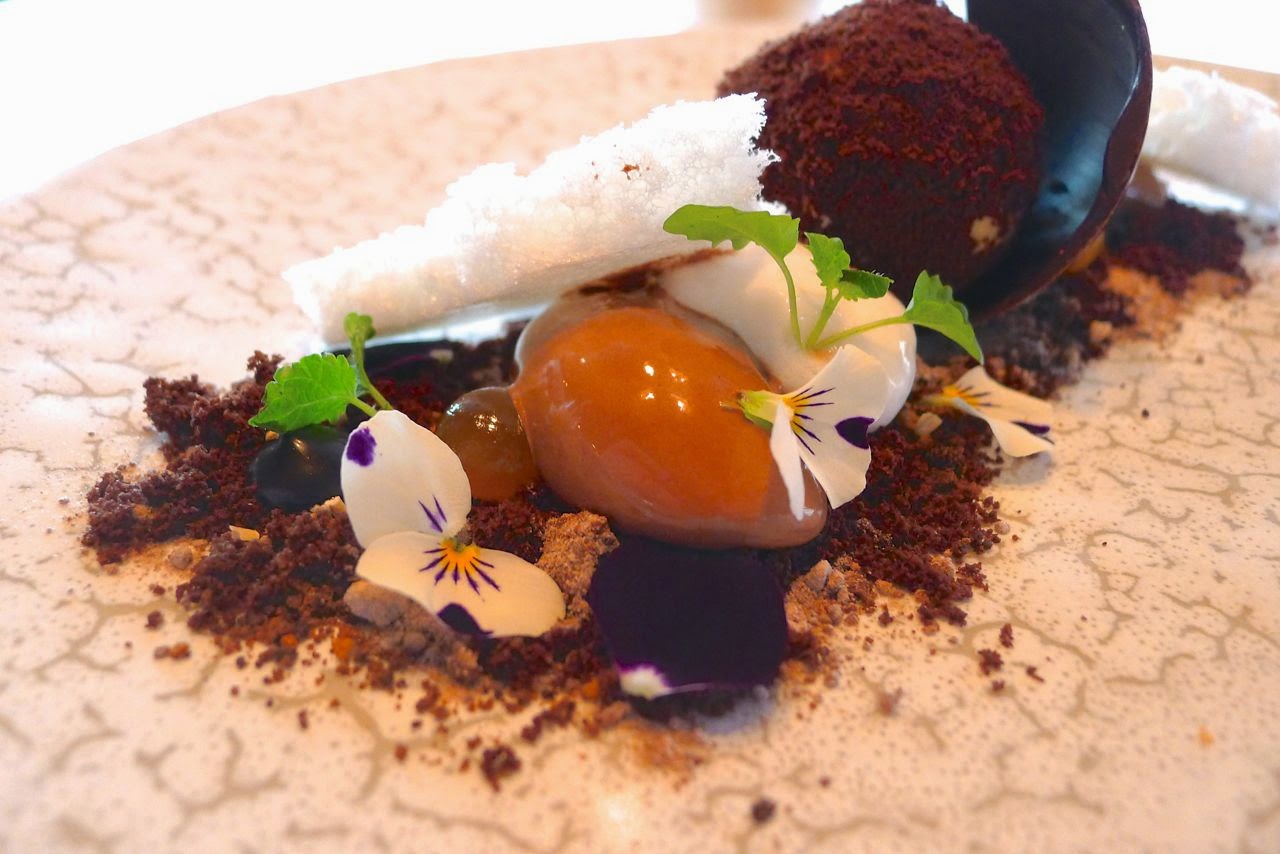 Iced malt parfait, whiskey, dark chocolate sorbet – I’ve always found the desserts at Manchester House to be very good and this was no exception. The flavours chocolate flavours were strong without being too bitter and were well balanced with the whiskey and malt. One slight tweak I feel could be made to perfect the dish is to use less soil / crumb as the final couple of mouthfuls were somewhat ‘gravelly’. 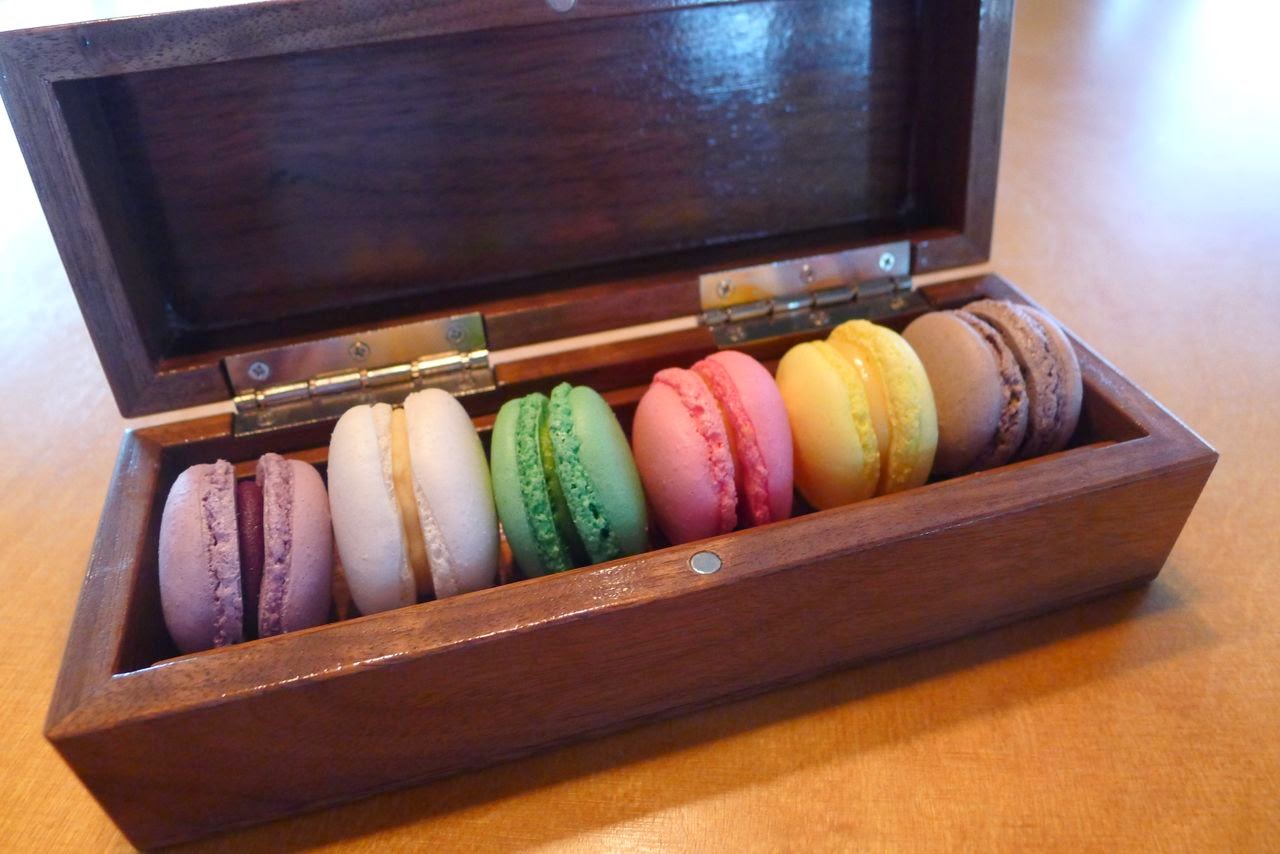 Macarons – the lemon one is my favourite every time.

Whatever ‘Restaurant Wars: The Battle for Manchester’ goes on to show in the next two episodes and whether Michelin decide to play ball and award either or both places a star… one thing is for sure, the food offerings in Manchester have greatly improved since Simon Rogan and Aiden Byrne came to town.