The Blue Pig is the latest project from Manchester’s ‘Odd people’ – more specifically Cleo ‘Queen of Bars’ Forman who also runs the Odd, Odder and Oddest bars (sorry for the nickname but the only picture Google threw up reminded me of a young Mary ‘Queen of Shops’ Portas). 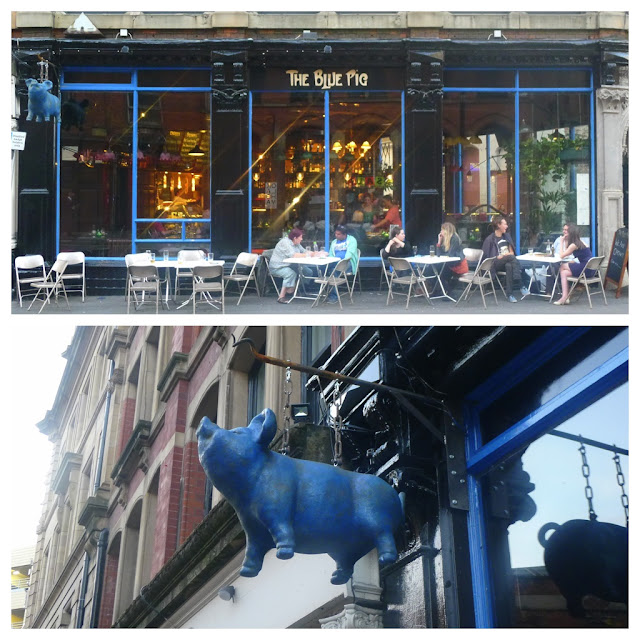 Sticking with Google, if you search for ‘blue pig’ on the first couple of pages you’ll find a graphic designer, B&B, purveyor of free range pork, ‘orchestra’, MTB frame, art studio, a deli and several pubs / restaurants all bearing the name.

Whilst ‘The Red Lion’ remains one of the most popular UK pub names, ‘blue’ crops up frequently too.  In the town of Grantham and its surrounding areas various public houses over the years have allied the word blue with pretty much every animal on the Ark, including Blue Pig, Lion, Horse Dog, Bull, Cow, Ram, Sheep, Lamb, Fox and Man - this succession of blue animal named pubs can be traced back to the Manners family; local landlords who incorporated the colour into the names to show their political affiliation with the ‘Whigs’. 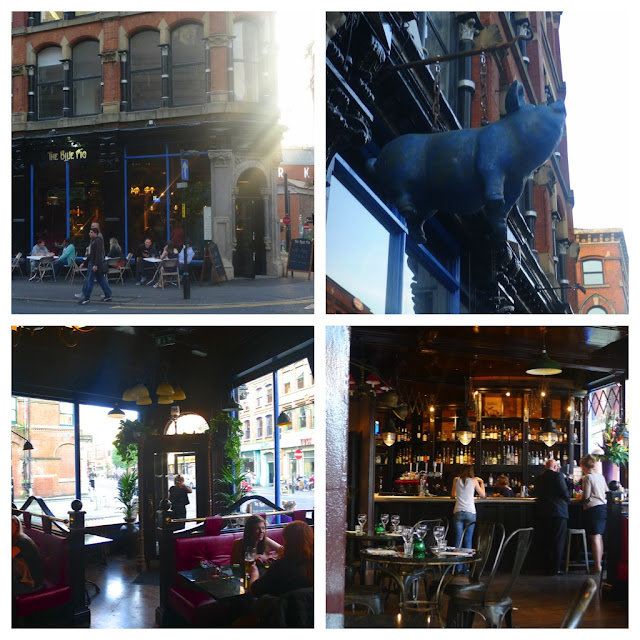 Blue can also represent hope, especially when paired with an anchor. The Blue Anchor pub near to where I misspent my youth suffered as a result of paint wielding “pranksters” who, with a penchant for covert decorating missions under the cover of darkness, liked to surprise the landlord by changing the colour of the cast iron anchor they kept chained to a tree.

Now, I’m not saying that myself and a fellow band of mischief-makers had anything to do with it but I’ve heard these shenanigans have stopped since I moved north. Also, perhaps in an attempt to thwart paint-wielding mischief-makers, the pub has since dropped any reference to colour and is now just called the Anchor.

It’s interesting that pub names do often change – if they didn't many of them would still be called the St. Peter or the Virgin Mary, because before the Reformation, they were owned by the Catholic Church and the beer was brewed in local monasteries.

When Henry VIII dispensed with the Catholic Church, landlords had an option to change the name to something more pleasing to the king, such as the aforementioned Red Lion (his coat of arms) or the King’s Head or lose their own heads.

Name changes can however be unpopular with locals, I remember when one brewery upset regulars when the ‘Bear and Ragged Staff’ became ‘The Orange Kipper’ (it was soon changed back). As far back as 1710, an editorial in The Spectator denounced the introduction of what it called ‘silly pub names’ such as the Blue Boar or Flying Pig… which finally brings us nicely to Manchester’s very own Blue Pig. 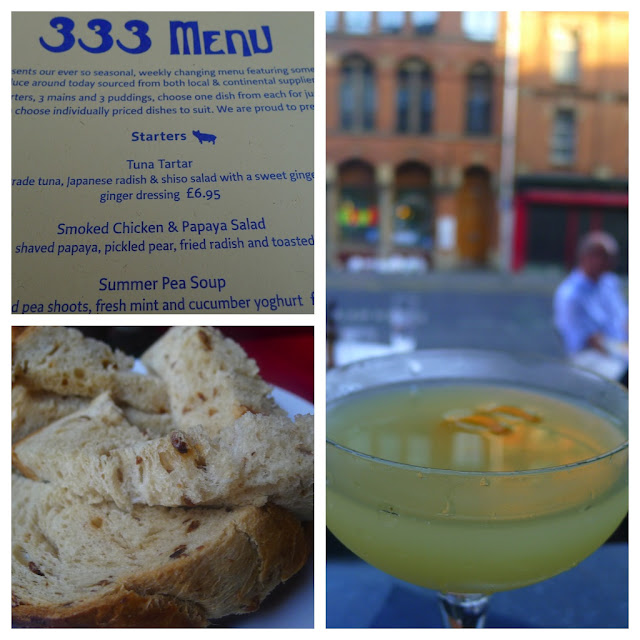 As well as deli boards throughout the day, the Blue Pig’s afternoon and evening menu is called the ‘333 Menu’ – presenting a choice of three starters, mains and puddings for £20 (dishes are priced and can be bought individually too). The menu is seasonal and changes weekly with claims that it features ‘some of the finest produce around today sourced from both local and continental suppliers’. 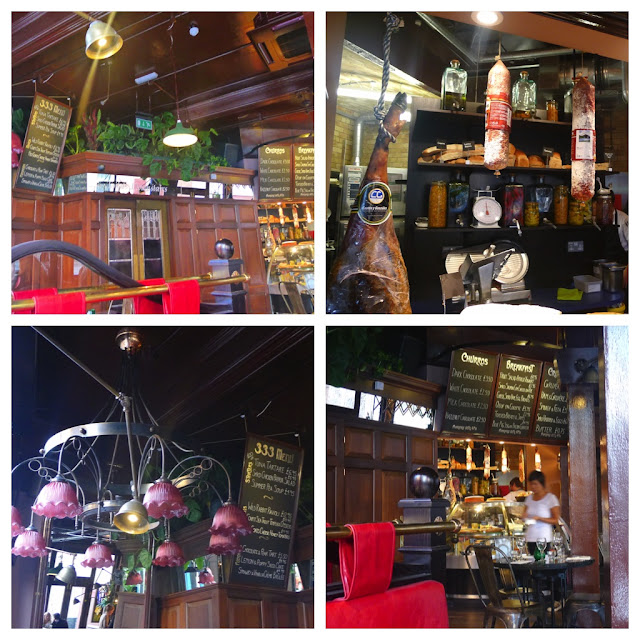 The deli boards (meat, veg, cheese, fish & mixed) that we saw other tables ordering were impressively presented although I feel, from looking at the ‘build your own’ selection they could have made greater efforts to source more of the North West’s wonderful produce.

A point in example being the cheese selection: with only one coming from the NW region (a Mrs Appleby’s Cheshire), a couple from Yorkshire and the rest from around the UK, France and Switzerland – in my opinion, Mrs Kirkham’s, Butler’s, Saddleworth Cheese Co, Martin Gott at Holker Farm, Shorrocks, J J Sandham and Dewlay are just a few local cheese maker’s whose cheeses would improve the Blue Pig’s selection. 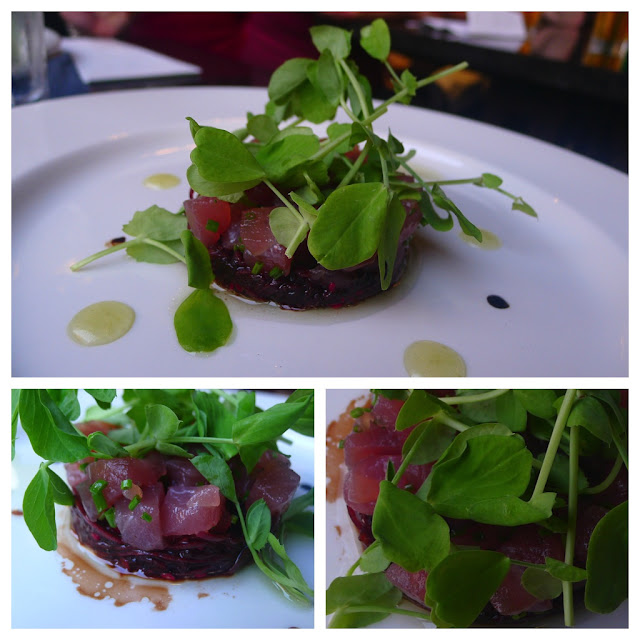 My wife and I both opted for the Tuna Tartar – my wife and I loved this well-balanced dish with its Japanese influences: sashimi, daikon, shiso salad and a sweet ginger and wasabi dressing. 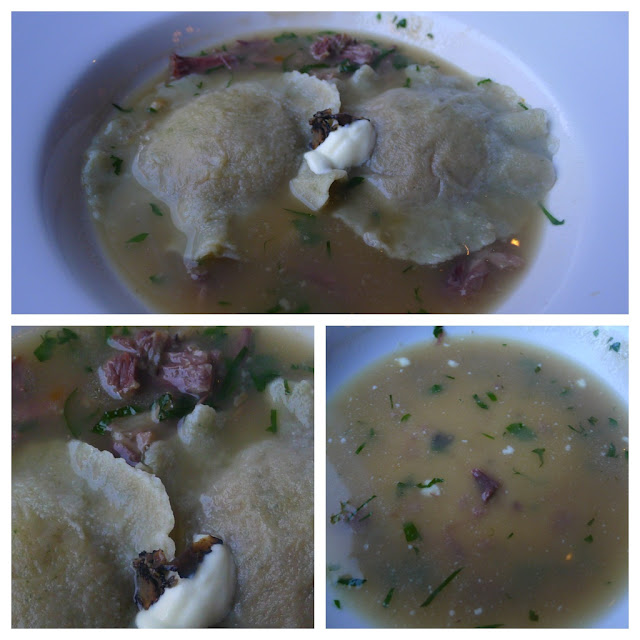 For my main, I opted for the Wild Rabbit Ravioli – this was not so good. The pasta was nice and thin but oxtail and truffle broth lacked a little in flavour for me. The whole thing looked a bit murky and unappetising and was also served lukewarm with no spoon to eat the broth. 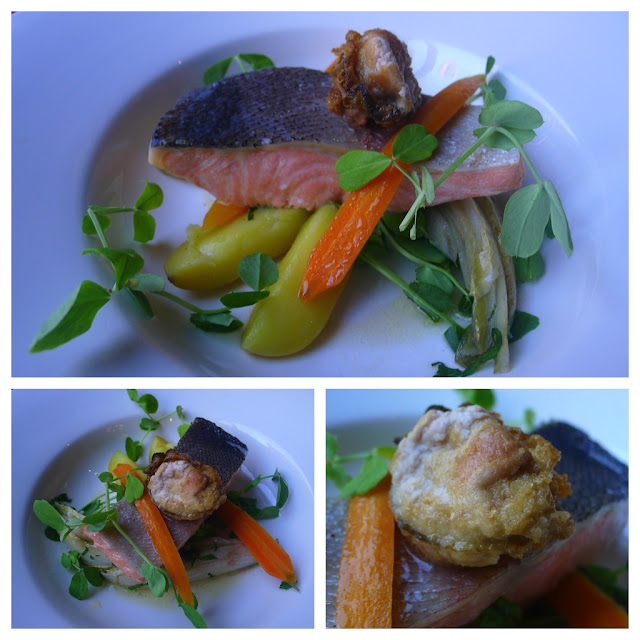 My wife’s main, of Confit Sea Trout & Tempura Oysters was a little better. The fish was good well (if not a little over for personal taste). The tempura ‘oyster’ was excellent but it was in the singular and not the multiple that the menu description implied. The baby carrots, chicory and saffron potatoes got the thumbs up but the ‘smoked garlic’ dressing was another disappointment due to its subtlety. 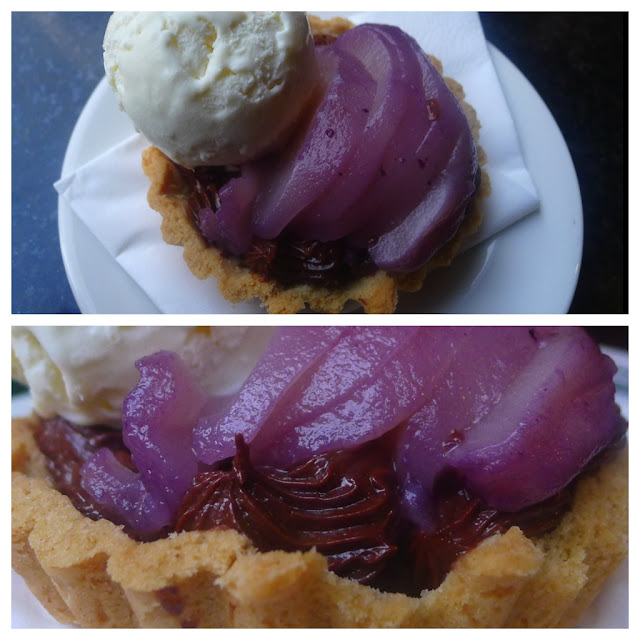 My wife had eaten enough, so I ate both of our desserts. The pick of the brace for me was the Chocolate & Pear Tart that had a rich, bitter chocolate flavour, decent pastry, sweet vanilla poached pears and a smooth white chocolate ice-cream. 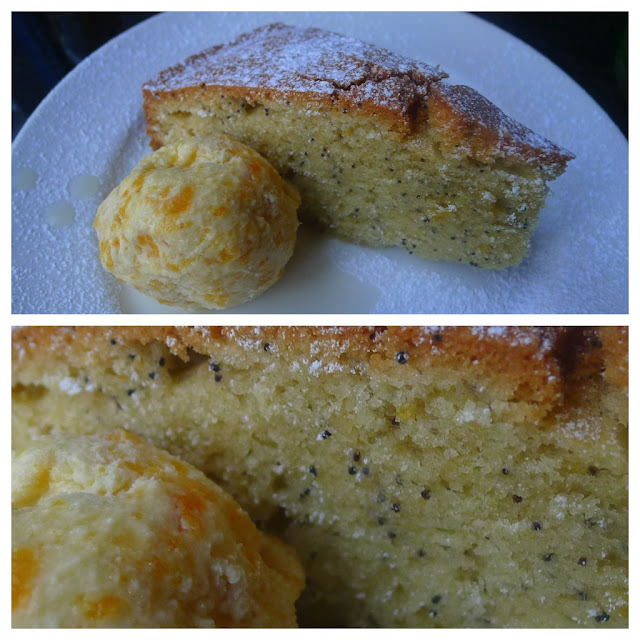 I didn’t like the Lemon & Poppy Seed Cake – the lime syrup was very good but I found the cake itself lacked in lemon and the accompanying ‘apricot mascarpone’ was an anathema to me (it’s highly unusual for me not to eat something – this, I left.)

Service on the evening too was a little dodgy (but I don’t like to knock a place on the incompetency of one ‘obviously new’ individual); I have since been in on a couple of occasions for drinks and received friendly and competent service.

As a ‘pub’ where you can have a light snack – I think the Blue Pig is a great place and good addition to the city centre and Manchester’s Northern Quarter. Those looking for a ‘gourmet experience’ could find better. I do like the décor and the Parisian vibe.

One more thing, up until 4pm everyday, they do Churros with a choice of dark, while, milk or hazelnut chocolate – I’ll be back for this, greedy pig that I am!