A typical Sunday for my wife and I usually involves popping into Manchester for a mooch about the shops. Unsurprisingly, my requirements for the day’s itinerary typically comprises of (parking in Chinatown) going in to all of the Chinese grocery stores; the fish mongers in the Arndale and then onto the food hall in Selfridges and the deli / food emporium in Harvey Nicks.

My wife’s ‘must dos’ normally include an hour or so in Primark, then onto Hotel Chocolat, Lush and Pandora. Despite our differing ‘shopping’ agendas, one thing we both equally enjoy about our Sunday shopping trip is the, invariably lengthy, ‘discussion’ about where to have lunch (I say discussion, somehow I generally get my own way!) 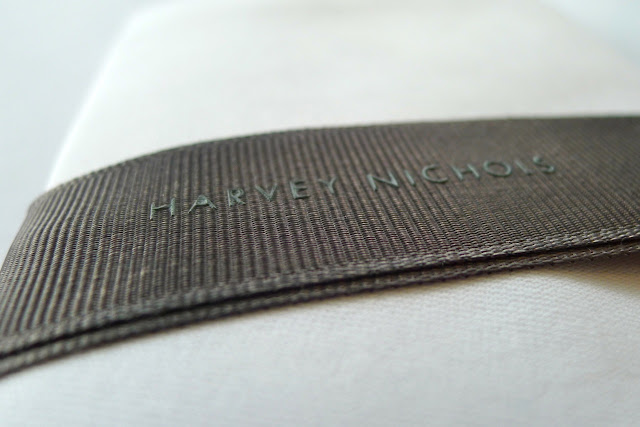 We often visit the Harvey Nichols bar for drinks and light bites and have been meaning to dine in the restaurant for some time. Recently, I have been hearing increasingly positive things about the ‘Second Floor Restaurant’ and after reading their entry in the ‘Relish Greater Manchester & Cheshire’ book and noting they they have been nominated as 'Restaurant of the Year' in the Manchester Food and Drink Festival (MFDF) 2011 Awards, decided that it was about time we stopped talking about it and went to see for ourselves. 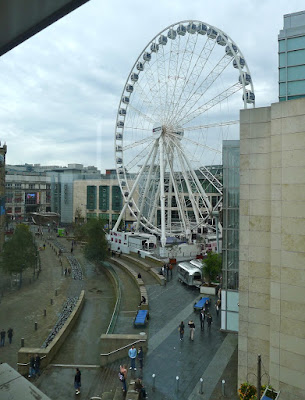 The Second Floor Restaurant at Harvey Nichols overlooks Exchange Square, The Shambles and the Arndale and Triangle shopping centres. The area was regenerated extensively after the 1996 IRA bombings and as well as being the site for branches of the prestigious Harvey Nicks, Selfridges and the world’s largest Next store, is the location for the Wheel of Manchester.

After five years working in the restaurant, Chef Stuart Thompson was promoted to the Head Chef position in 2009 and has been nominated as 'Chef of the Year' in this year's MFDF Awards. Originally from Edinburgh, Stuart dreamt of becoming an electrician when he grew up which gives me ample opportunity to make lots of puns about how electrifyingly good the dishes were and how the menu lit up my face – but I really should resist and pull the plug on these shocking jokes before I get carried away. Go on then, one more before I get to the serious stuff (the food)… the champagne cocktail aperitif was sparkling! 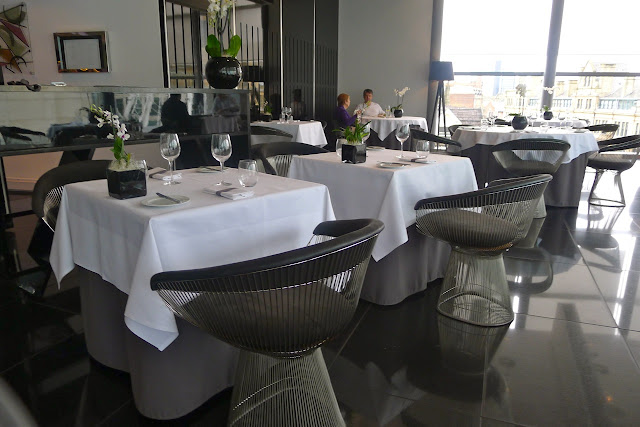 As well as menswear and the main restaurant, the ‘Second Floor’ comprises of a bar, brassiere and café area, serving food from the in-store delicatessen. All areas are sleek and modern with grey, black and white décor set off with pops of colour from modish lighting but it’s the main dining room with its crisp table linen, fine tableware and fresh flowers that is particularly striking. The floor to ceiling windows for taking in those magnificent views along with the marble floors and well-spaced tables make for one of the finest dining spaces in Manchester. 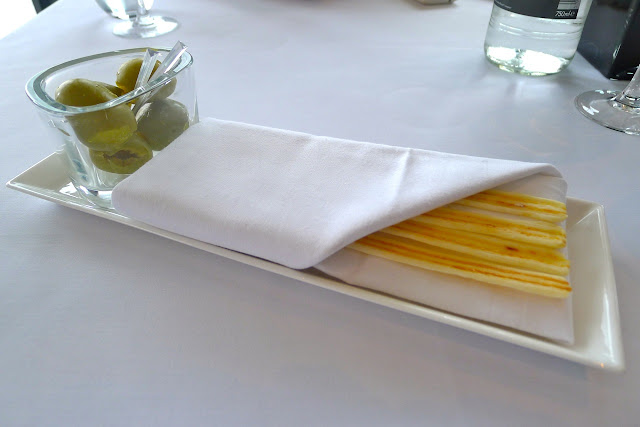 With the knowledgeable former restaurant manager from the Michelin starred Fraiche working front of house, the service is also exemplary.  After enjoying the amuse bouche of deliciously briny plump olives and ‘Parmesan straws’ we opted for the chef’s six course tasting menu. 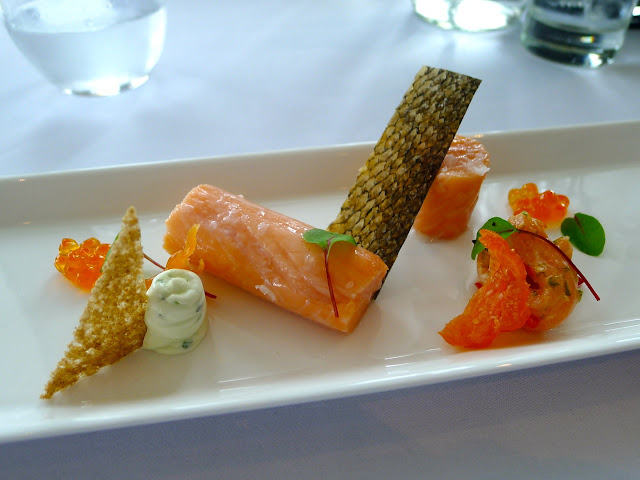 The first course was a delightful Scottish salmon dish featuring a cylindrical portion of perfectly poached salmon along with a tiny triangle of toast and a smooth cream cheese. Adding texture, a crisp shard of salty salmon skin; the interesting salmon ‘jerky’ and one of my wife’s favourites, the popping salmon roe. The best thing on the plate, for me, was the citrusy kick of the salmon ceviche. 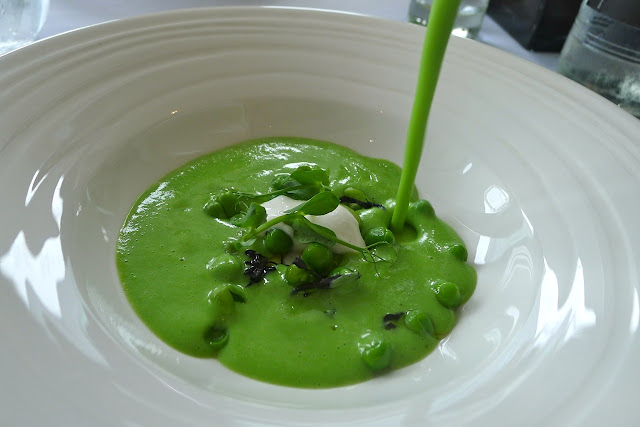 The second course was a wonderfully fresh Garden pea soup. Of all the dishes on the menu, the soup sounded the least noteworthy – however, it proved to be one of the tastiest soups I have had in a long while. Beautifully presented, perfectly seasoned with a vibrant pea green colour and a quenelle of crème fraiche. 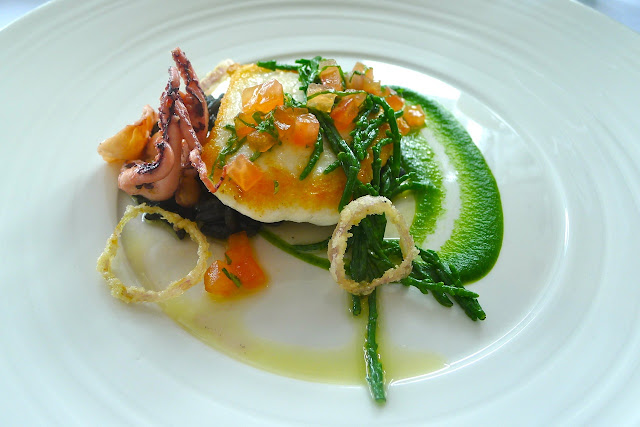 The fish course featured a fabulous fillet of Fleetwood Brill, served with squid ink risotto, baby octopus and a sauce vierge. The brill was locally sourced from Fleetwood (about an hour from Manchester) and was just fabulous. The delicate onion rings were exquisitely crisp and the tiny tomato dice added yet more texture and sweetness. The whole dish was brilliantly conceived and executed but it was the baby octopus that especially shone - delicately cooked and meltingly tender. 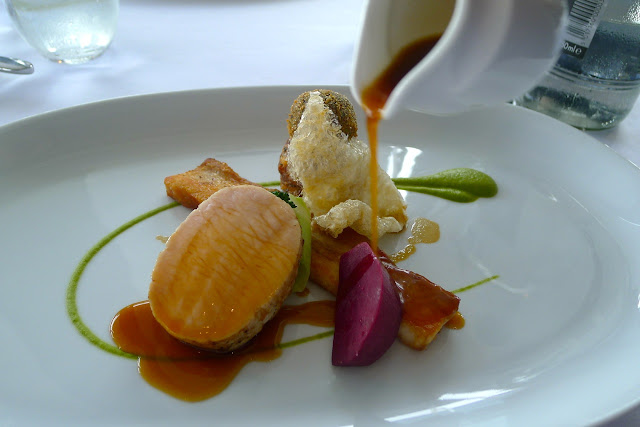 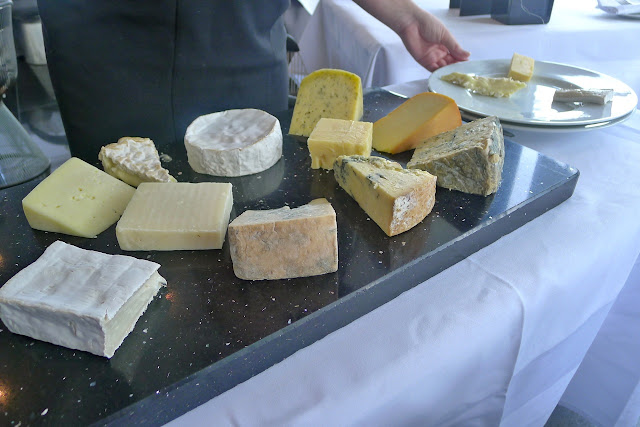 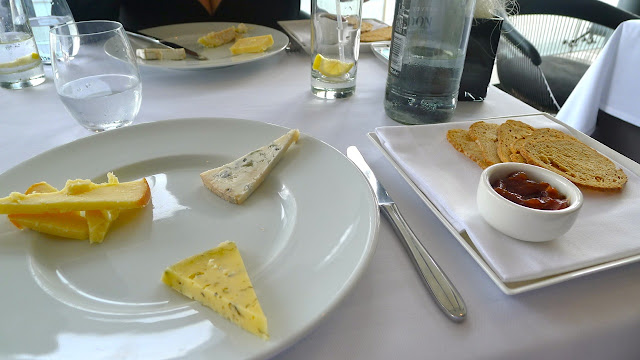 Next, we each selected three British farmhouse cheeses from the trolley, served with Homemade bread wafers and a pear chutney. The stand out cheeses, for me, included a fine Lincolnshire Poacher, a strong and pungent Norfolk White Lady that had a Brie like texture and similarities to Époisses or Langres and a Welsh Teifi cheese, flavoured with Laverbread (seaweed). 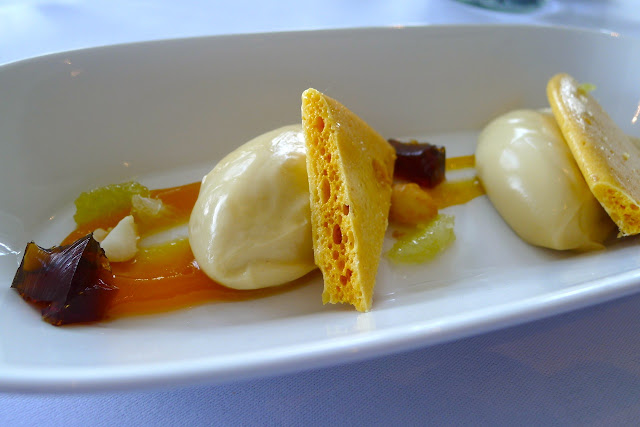 The dessert was called Manuka Tea Set Cream – one thing I particularly enjoy about tasting menus is that you occasionally get to eat something that you probably would not choose, as was the case with this pudding. I loved this dish; it had interesting flavours and good textures, including a brown sugar jelly, apricot purée, lime confit and of course the Manuka honeycomb and creamy Manuka brûlée. Incidentally, my choice of dessert from the the À la carte would have been the ‘70% Valhrona Chocolate Soufflé with white chocolate sorbet and cocoa nibs’ which I’m sure would have been fantastic but I’m glad I had the honey dish.

My one slight criticism would be aimed at the chairs; at first I thought they looked cool but they seemed a little low and after a couple of hours sat in them I was suffering from pins and needles. As a result, we decided to skip the coffee and the playful looking lollipop petit fours in order to catch the last few shops before they shut.


Not our typical Sunday in Manchester but a pleasant change to the more informal city centre eateries that we usually frequent. We’ll definitely revisit.