From the moment chef Isaac McHale and front of house duo Johnny Smith and Daniel Willis opened the doors in 2013, The Clove Club in the former Shoreditch Town Hall, has been one of the hottest tickets in town. A Michelin star and the ‘highest new entry’ ranking, at 26, on ‘The World’s 50 Restaurants’ list, have helped to ensure that this is still the case. 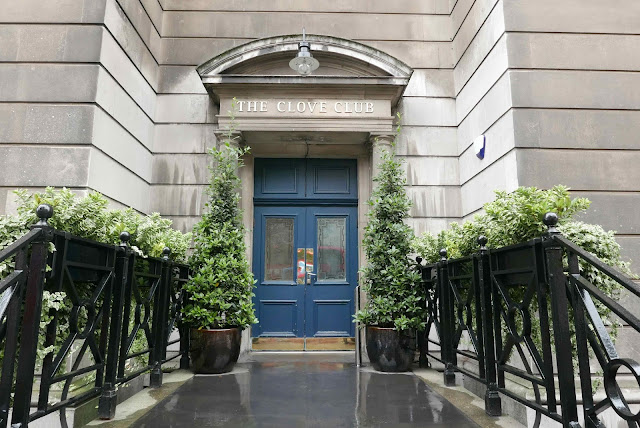 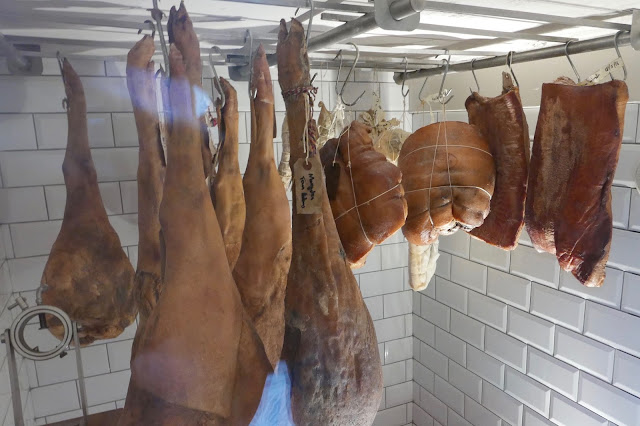 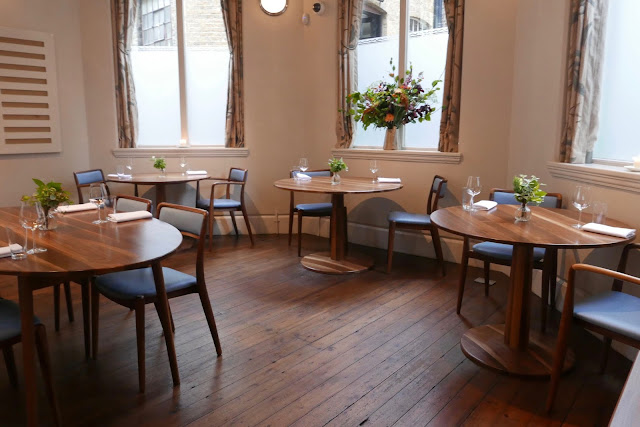 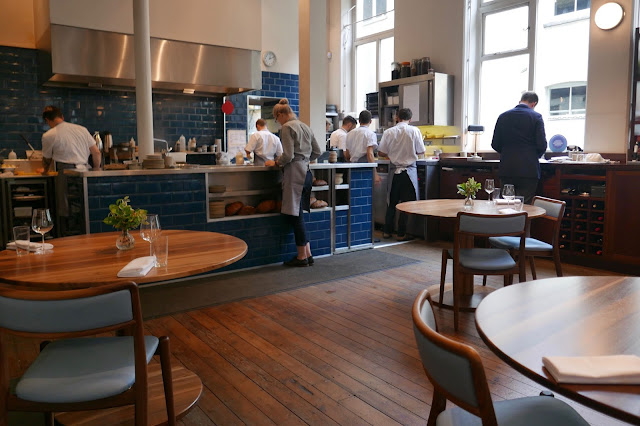 As well as the a la carte, The Clove Club offer a ‘5 course’ and ‘extended’ tasting menus. I ordered from the a la carte – the kitchen also sent a taster portion of the duck and some charcuterie. 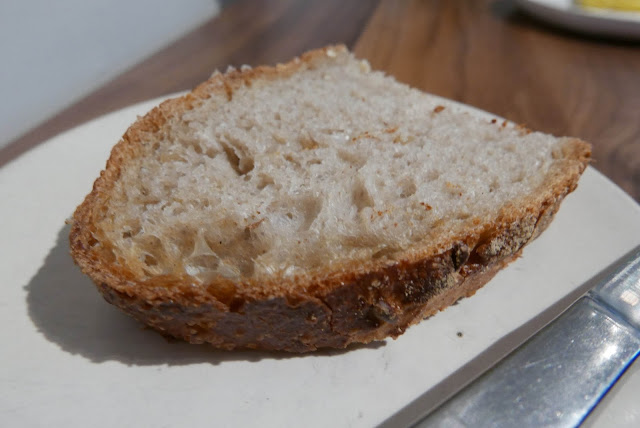 Here’s what I ate: 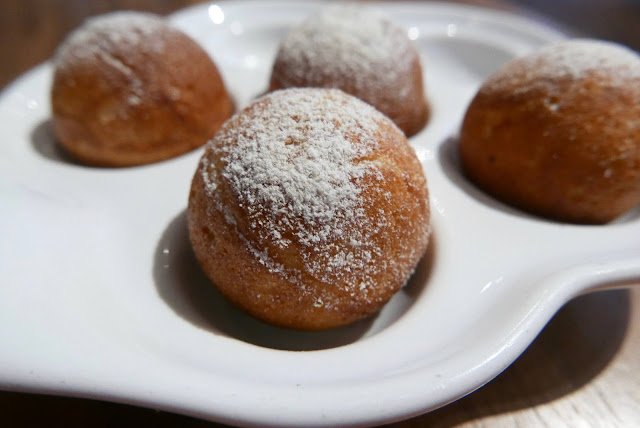 Haggis Buns – The haggis buns, dusted with a powdered Somerset cider vinegar, are magical little things. They’re like a cross between a gougére type thing, a doughnut and an Asian steamed bun – filled with haggis! 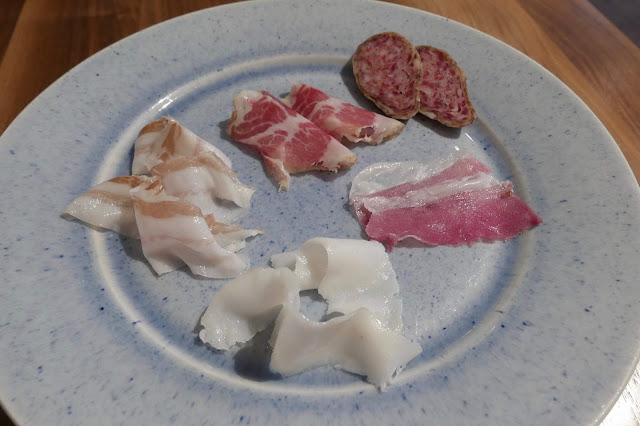 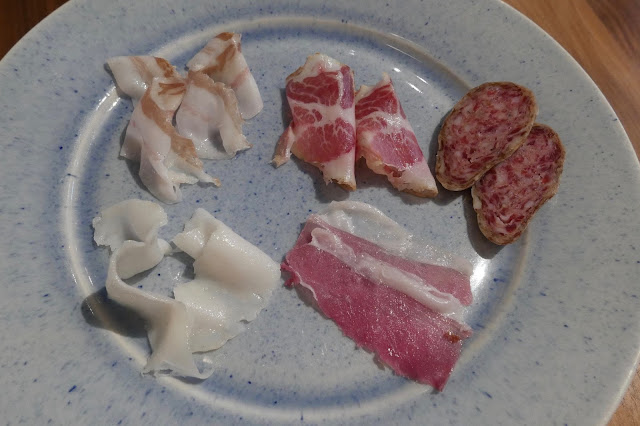 A Plate of Cured Meats – The in-house made cured meats are up there with the best I’ve sampled from some of the world’s most celebrated specialist producers. I didn’t take notes but I think these were types of speck, lardo, salami, culatello and prosciutto. 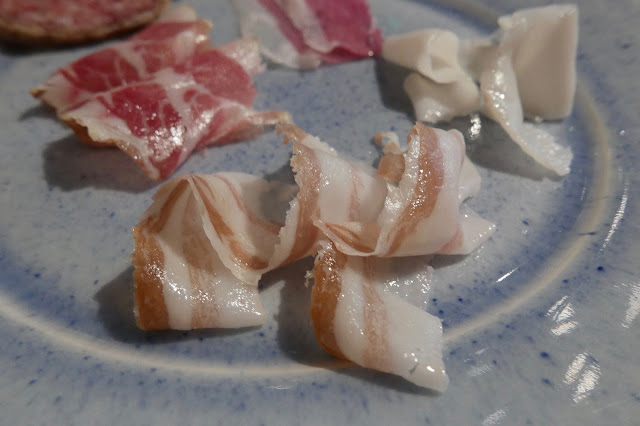 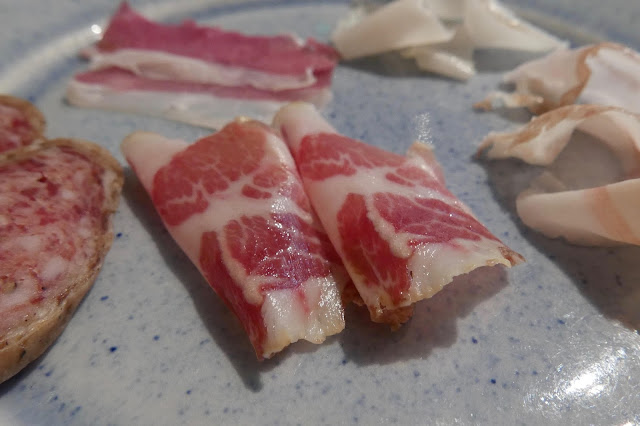 I don’t know how true this is but an old boy in a Spanish bar told me that good test of quality for certain hams (aside from taste) is to rub some of the fat between your thumb and forefinger – the good stuff will melt into the skin like moisturiser; this was most definitely the good stuff. 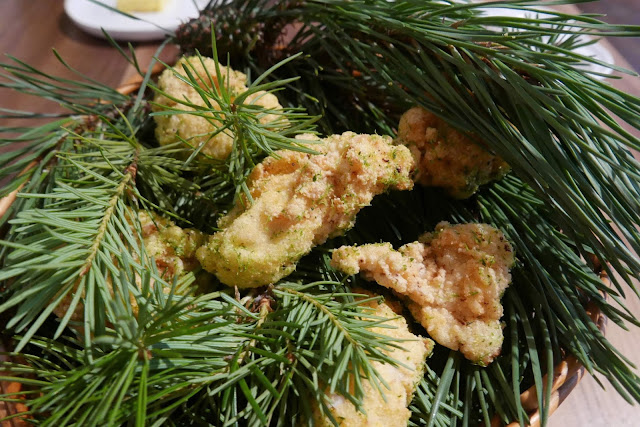 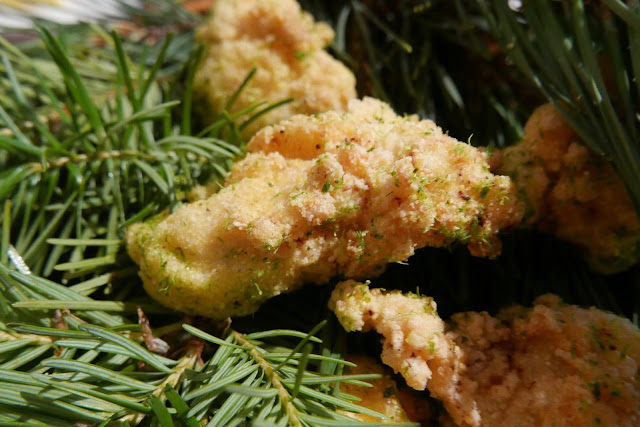 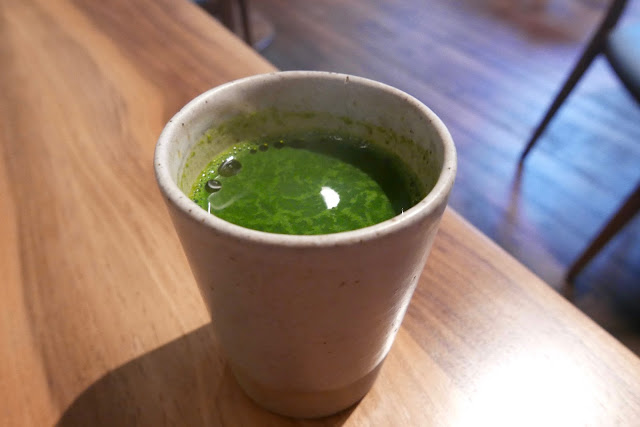 Summer Herb Broth – a fresh and vibrant dish, this lungo sized shot of broth was made from mussel stock and summer herbs (including chives, parsley, chervil and tarragon?). Tiny roundels of baby courgette floated within. 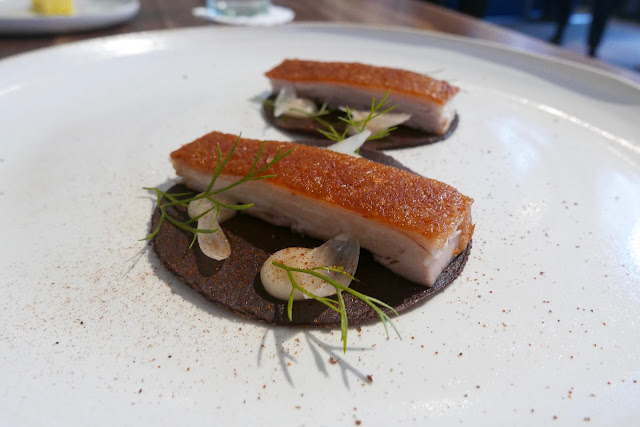 Two Little Buckwheat Pancakes of Suckling Pig – with a soft texture (not unlike chamois leather to the touch), these pancakes were delightful little things. 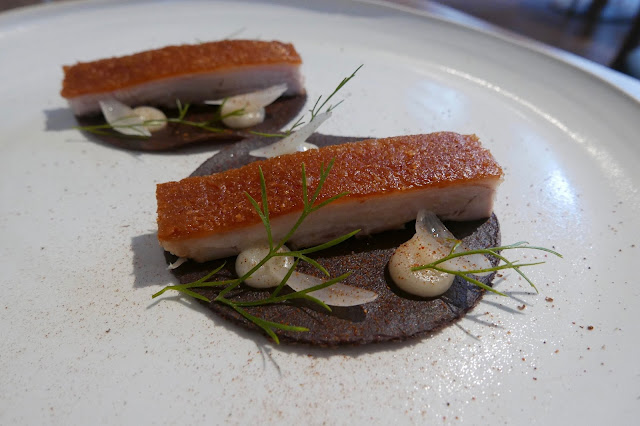 A confident, balanced and innovative dish made from buckwheat flour and pig’s blood, the ‘tacos’ were topped with alliums, fennel, suckling piggy and a smattering of “devilled spices” (I’d guess mustard, cayenne, celery salt, ginger, mace and such like). 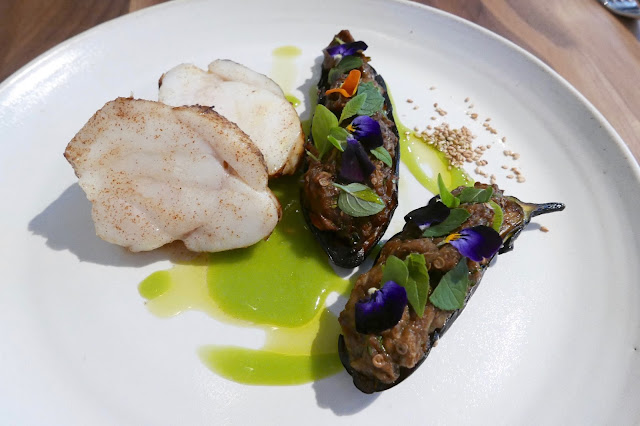 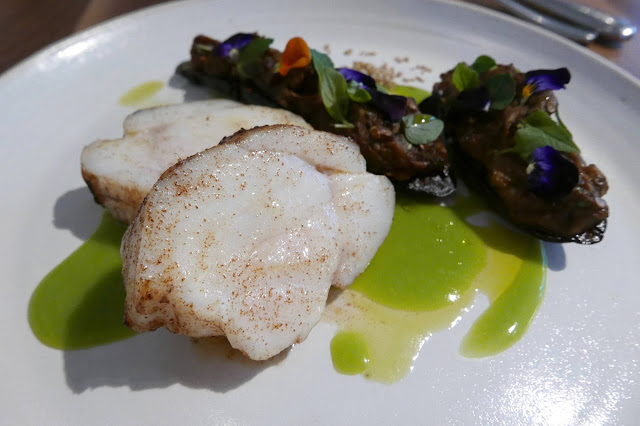 Hazelwood Grilled Monkfish, Organic Aubergine & Green Tomato – an artfully presented dish thanks to the flora fandangle, it was the flawlessly cooked monkfish that held the real beauty on the plate. 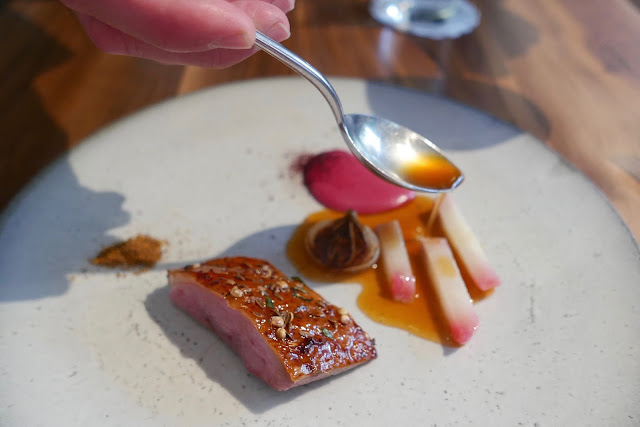 21 Day Aged Aylesbury Duck Breast, Fermented Red Cabbage & Beetroot – having pretty much perfected the cooking of the ducks (often using Challans), this dish has become somewhat of a signature dish for The Clove Club. 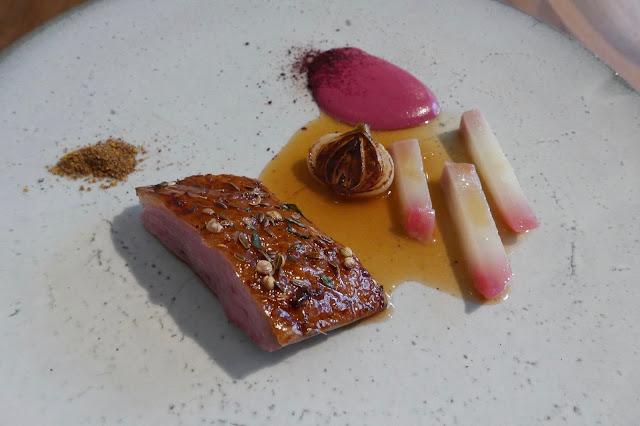 It usually comes in three parts, including a consommé with 100 year old Madeira. I sampled ‘Part 2’ – a piece of the roast breast in an aromatically spiced, black beer and heather honey glaze. 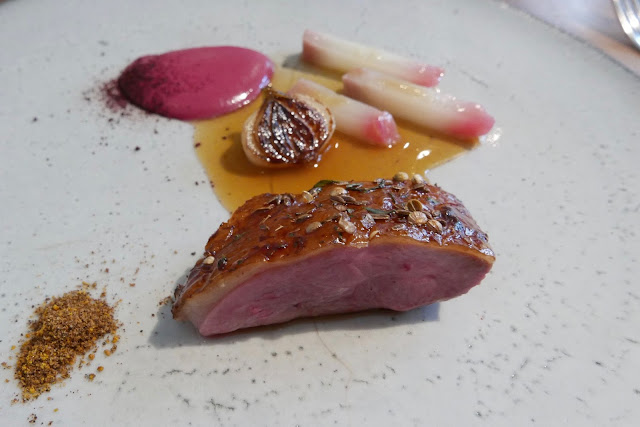 The pink hues of beetroot and fermented red cabbage forming a visually striking marriage with the joyously cooked duck’s flesh. 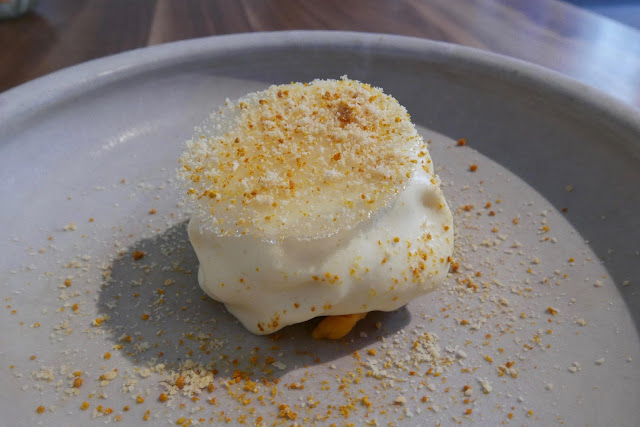 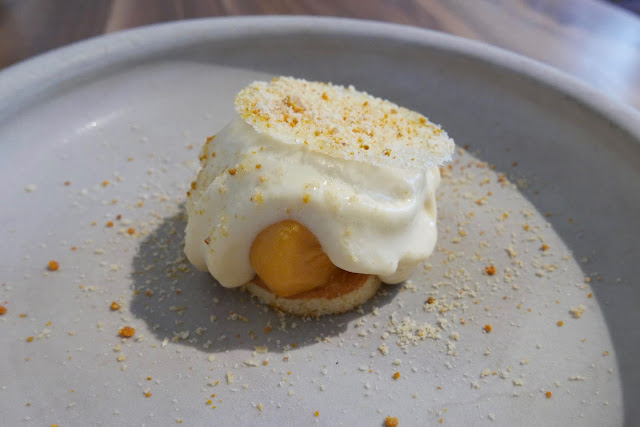