Having just got back from Spain, I’m eager to share my pics (and picks) from the ‘tapas trail’ we enjoyed in Seville… but before I do that, let me tell you about Splendid Kitchen’s ‘Chicken Tuesdays’. 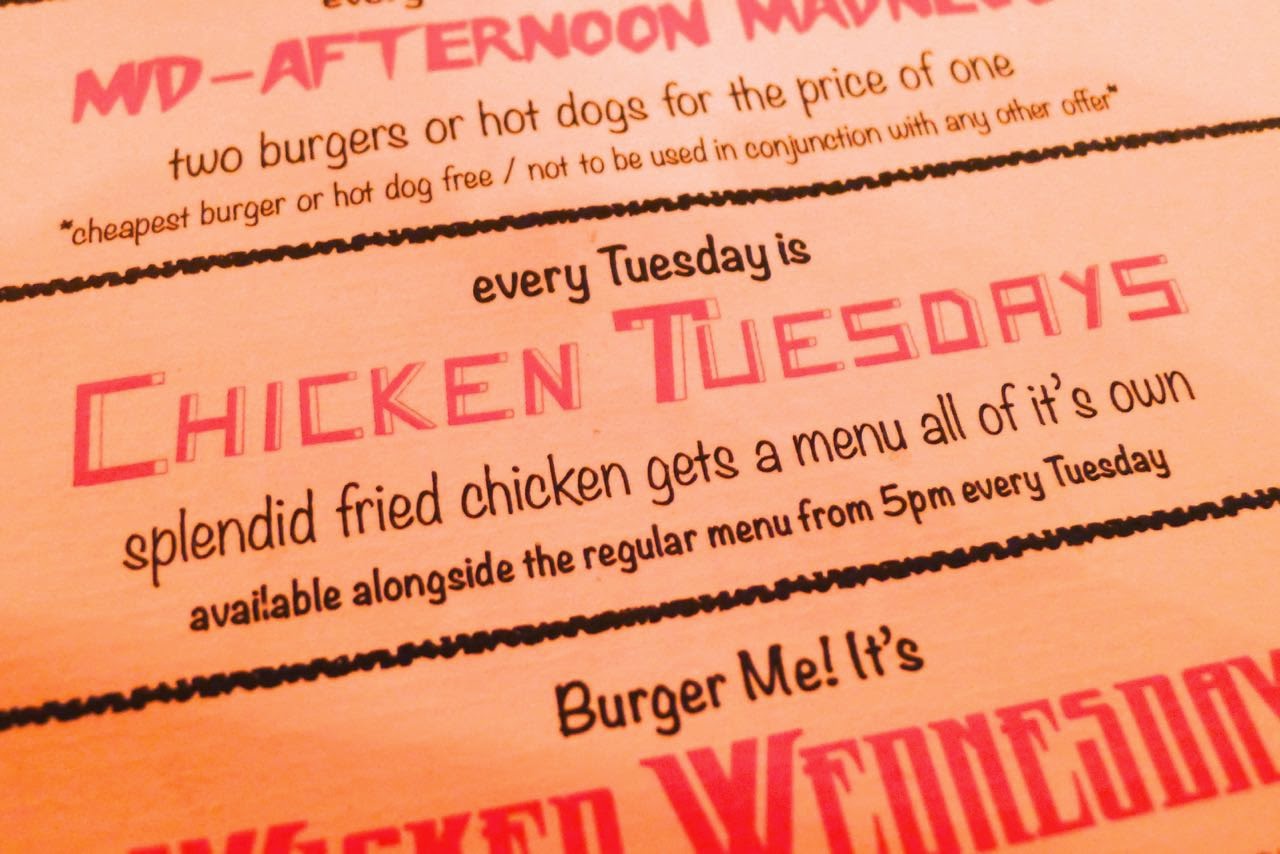 Splendid Kitchen used to be known as the Splendid Sausage Co. but changed their name when they expanded their menu of speciality sausage hot dogs to include a much wider range of American based junk foods… think: hush puppies, corn dogs, sliders, tacos, po’ boys, mac ‘n’ cheese and, of course, fried chicken (their fab beer battered gherkins should also get a special mention). 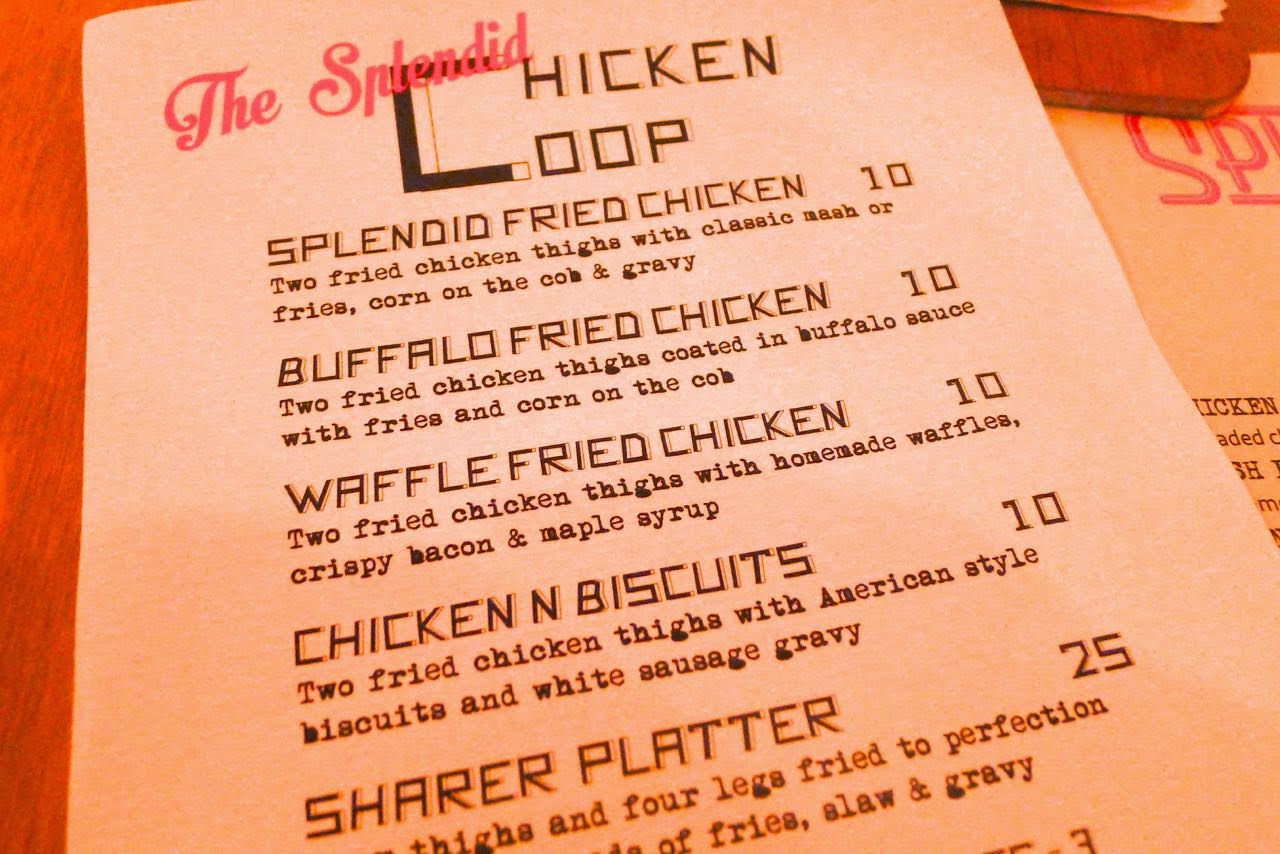 Splendid are currently running a few promotions and special events, including ‘Lunch for a fiver’ ‘Mid afternoon madness’ ‘Kitchen takeovers’ and the ‘dirty burger’ driven ‘Wicked Wednesdays’ but it was talk of the ‘Waffle fried chicken’ that had me and a group of pals excited. 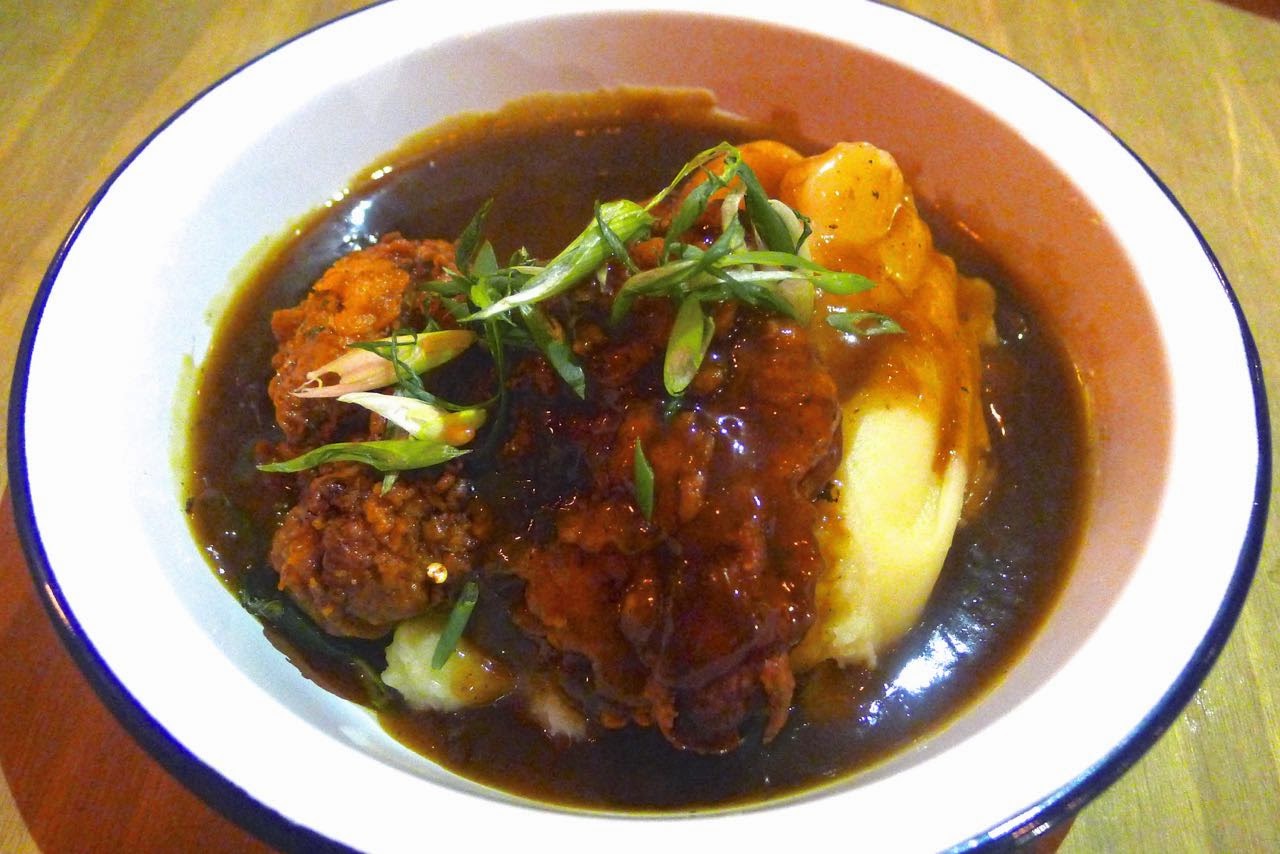 As well as two portions of the ‘Waffle fried chicken’, we shared ‘Chicken bites in Buffalo sauce’, ‘Splendid fried chicken’ with mash and gravy, ‘Nacho fries’ and ‘Chicken ‘n’ biscuits’. 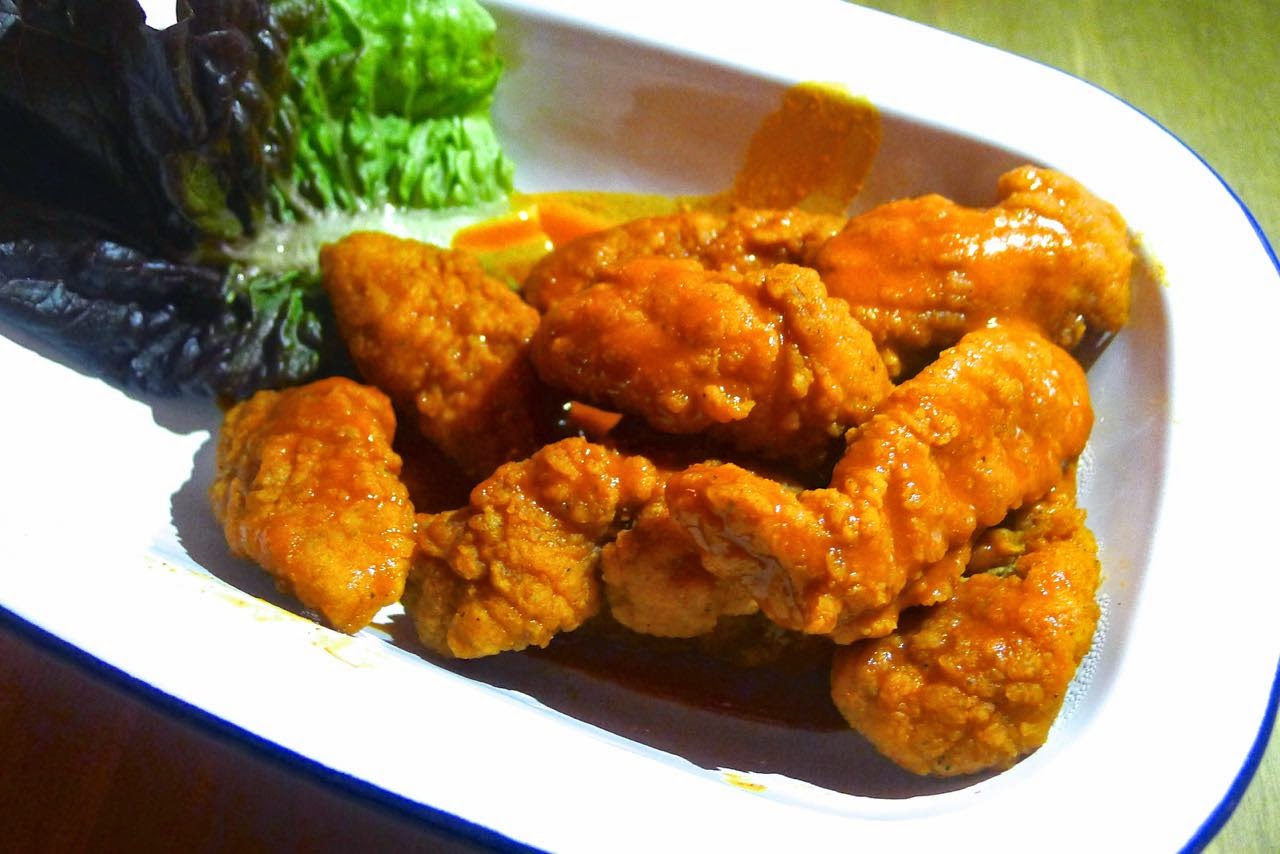 The Buffalo chicken bites were great. One globetrotting pal declared them better than Bubba Gump’s spicy chicken strips in New York but insisted they needed a blue cheese sauce – this request was passed onto the management so hopefully they will be served this way in the future. 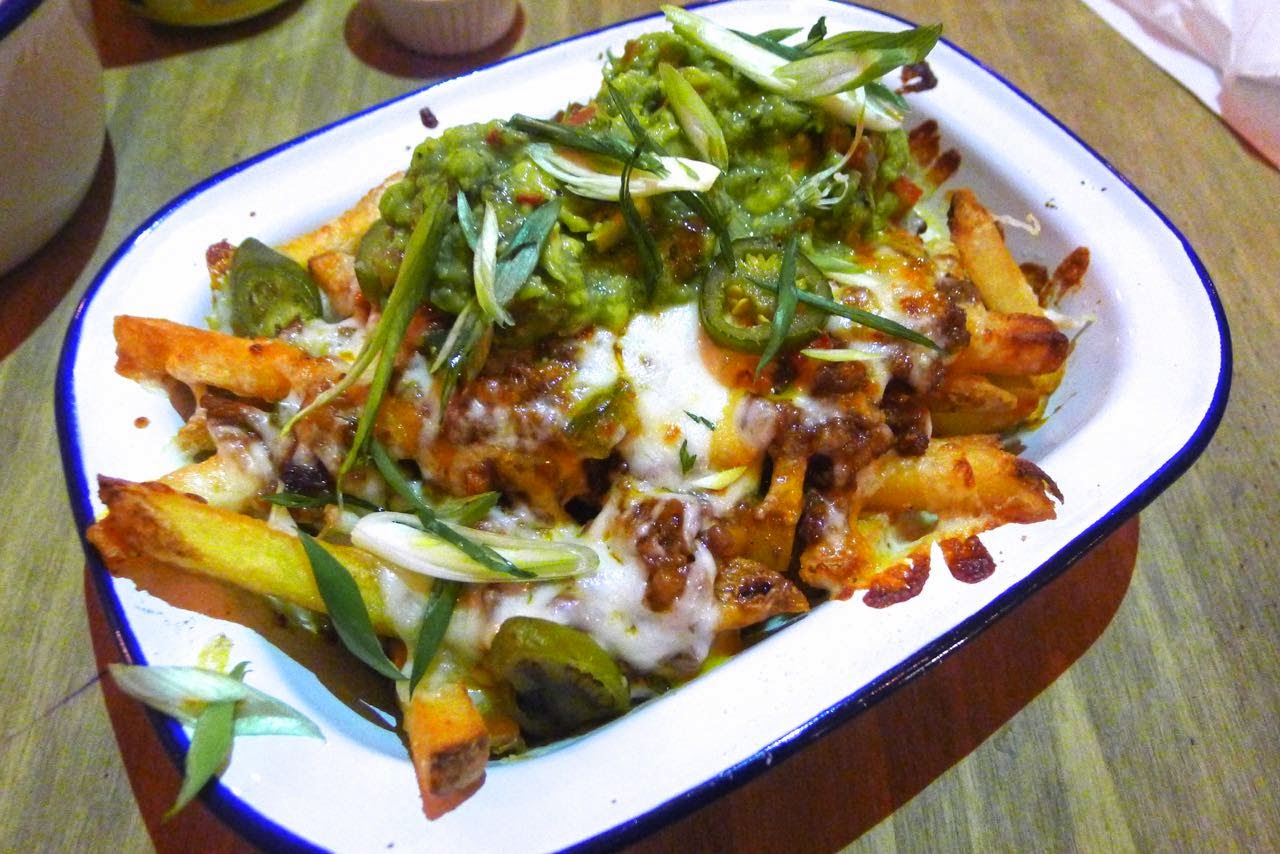 The ‘Nacho fries’ came slathered in a “Sloppy Joe” beef topping with spring onions, jalapeños, guacamole and cheese – these were a real winner (their Eggs Benedict Fries are also worth checking out). 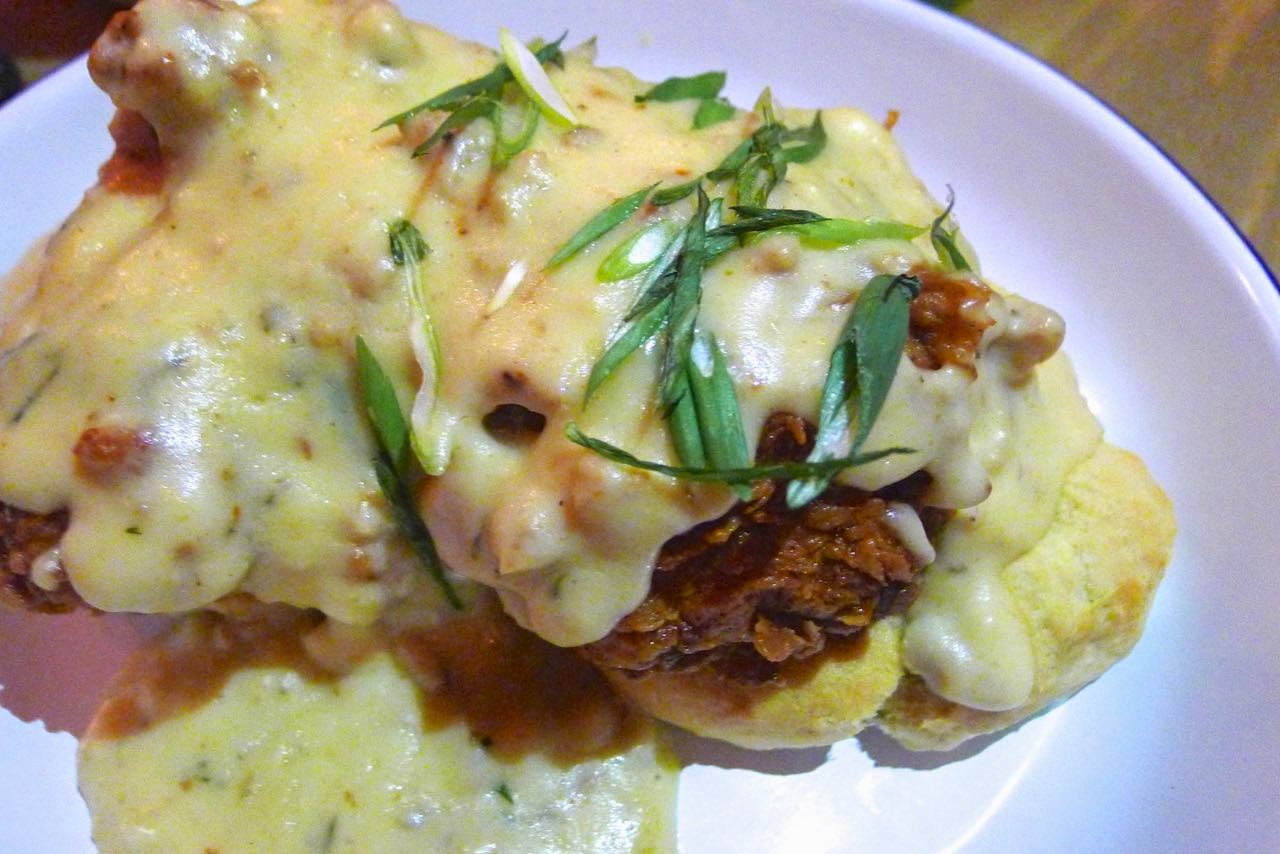 Similar to a scone, the ‘biscuits’ in the ‘Chicken ‘n’ biscuits’ were not to my liking. I found them a little floury and stodgy; the sausage gravy did not do it for me neither but then I ain’t no Southern belle. 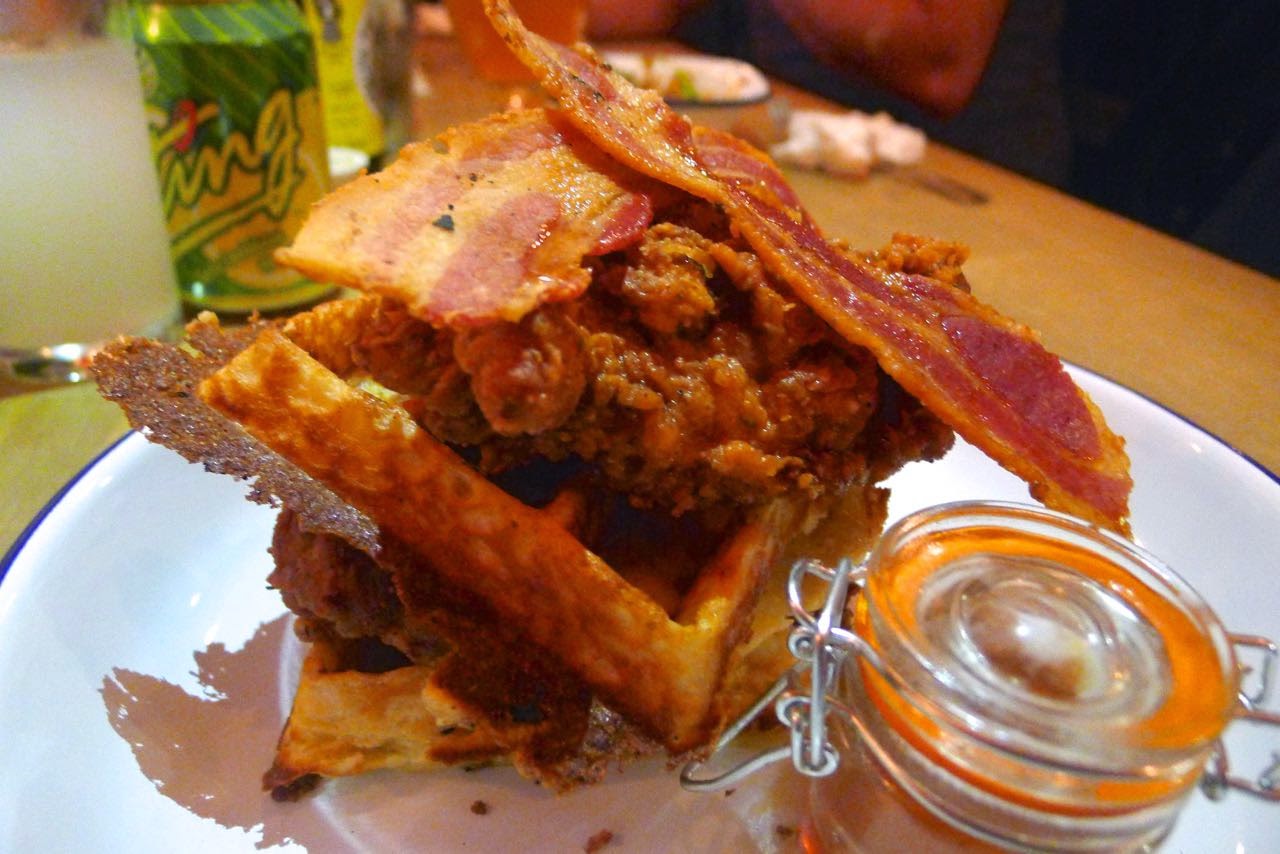 The general consensus was that the ‘Waffle fried chicken’ was indeed the winner! This soul food classic was the reason we went to Splendid Kitchen in the first place and it did not let us down. Whichever yank first decided to put crispy fried chicken and bacon on a waffle and drizzle it in maple syrup was not as daft as he sounds.

Two other positives re Splendid Kitchen: they sell Ting (and a selection of craft ales if that’s your thing) and they are one of the restaurants that have been helping out @NotJustSoupMcr feeding Manchester’s homeless. Splendid.