About 200 metres from my house in Cheadle Hulme, there is a small, family run Italian restaurant - Trattoria D’Agostino. It has been open a few months now and despite the close proximity we have only just got round to paying them a visit. 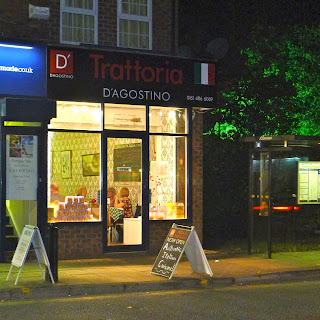 The main reason for our delay was, when it first opened we mistook it for a sandwich shop. Although, driving past, we started to notice that they always seemed to be busy in the evenings. We thought this might just be because they were new and that things would settle down.

When the business continued we decided to stop and take a look at the menu. It didn’t seem especially inspiring but helped us come to the conclusion that, in order to be so busy, they must be getting the simple stuff right - this was confirmed to us by the people we spoke to who had visited.

Last week, having planned to cook Hugh Fearnley-Whittingstall’s Stuffed Butternut Squash for tea we where scuppered when the Waitrose next door had sold out of squash. Luckily Trattoria had a table and they also do B.Y.O. (with no corkage) and Waitrose had 25% off of a nice bottle of Sancerre. All good! 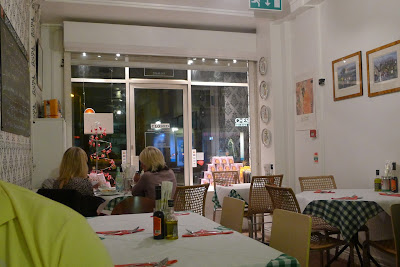 Inside out initial ‘sandwich shop’ impressions were reinforced. Tacky pictures (including an unframed Gustav Klimt poster), ‘economy’ furniture and a fridge in the dining room made for a (politely put) ‘unpretentious eating experience.’ Paper tablecloths and paper napkins completed the ‘modest’ feel.

Technically, there is not a ‘front of house’ as the Italian chef/proprietor cooks from the open kitchen, cornered off by a wood panelled counter but the two waitresses do a great front of house job - meeting, greeting and delivering a friendly and efficient service. 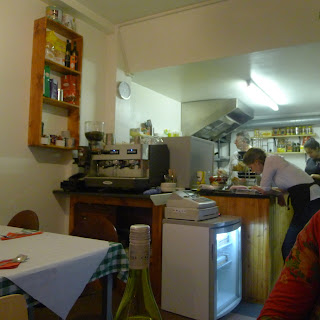 If they had been open for some years the broken clock on the wall may have stood as a metaphor about how time has stood still; for unlike some Italian restaurants, the lavish décor will not transport your spirit to renaissance Tuscany. But it is what it is; and what you have to consider is that this is a local restaurant that has bucked the trend and opened in the middle of a recession.

Supporting local businesses is important in these times and despite the fact that the owner clearly hasn’t spent a lot of money furnishing the place they always seem full of local people doing just that. With a glitzy outpost of the quality Gusto chain in sight and the long established Il Maestro (formerly La Piazza and Il Signore) just over the road in the precinct, Trattoria’s customers either come to support the local underdog or, more likely, for the overriding reason that - the food is good. 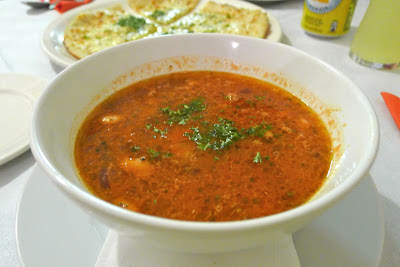 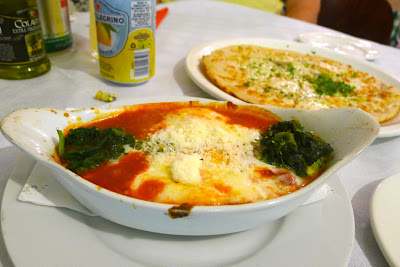 My wife chose the, Egg Fiorentina (v) – egg baked in the oven with spinach, tomato, mozzarella finished with Parmesan cheese (£3.95) – more simple ‘home cooked’ fare. I don’t often eat out at Italian restaurants because I usually feel I can cook better at home, this may still be the case but at £3.95, why would I? The egg was well cooked with a liquid yolk. 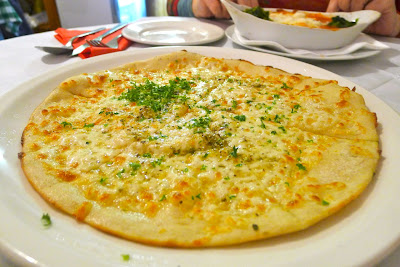 Accompanying the starters we also ordered a garlic bread to share; the Al Formaggio – with mozzarella cheese. The bread, priced at £3.95, had a delightfully thin crispy base and a subtle garlic undertone. 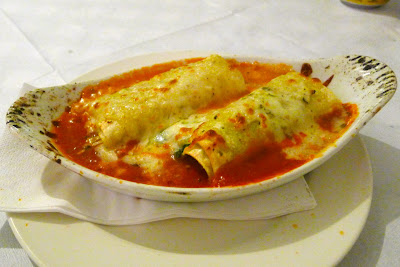 My main was not too dissimilar from my wife’s starter Cannelloni al Forno (v) - hand rolled cannelloni filled with spinach and ricotta cheese £6.20. The tomato sauce tasted identical to the starter and it was served in the same plate – out of the two I would say the Egg Fiorentina is the stronger dish. 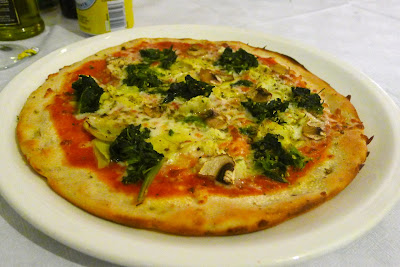 My wife opted for a pizza for her main, the Campagnola (v) - tomato, mozzarella, mushroom, spinach & artichoke   £6.95. A decent pizza, well cooked with fresh ingredients and delicious artichoke petals. 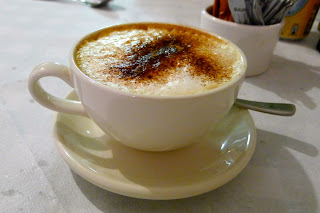 Ultimately, would I recommend Trattoria D’Agostino? I don’t think I’d travel far to eat there but what I would say is, if you live local and believe in supporting local businesses then, next time you don’t feel like washing up, definitely get yourself along for some simple but tasty (and inexpensive) home cooked Italian cuisine.