To quote the opening credits of Masterchef: The Professionals, ‘Only an elite group of chefs holds two Michelin stars’ and Michael Caines is one of them. It was at his eponymous restaurant at Manchester’s ABode Hotel that my wife and I recently decided to have our last lunch before having another attempt at starting and sticking to a pre-Christmas diet. 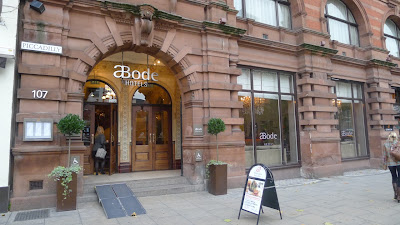 We had arrived in Manchester and decided to split up – my wife seeking to acquire ‘essentials’ to add to her ever expanding Imelda Marcos-esque shoe collection and me with the goal of finding something to dazzle in at my work’s Christmas do! A couple of fruitless hours later we met up and, empty handed, I declared, ‘I’m too fat!’
‘For what?’ my wife innocently asked.
‘Chimney sweeping… and clothes!’ was my sarcastic, yet truthful response.
‘Well, we’ve got six weeks you can lose at least a stone in that time.’
'Yeah, I suppose.’ I replied. ‘So, where shall we go for lunch?’ 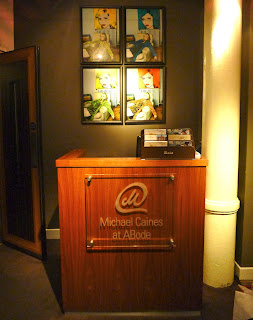 Having been there a few times in the past (although not since I started my blog) Michael Caines Restaurant seemed to fit the bill; the thinking being that if this was going to be our ‘last supper’ before a month of dieting we may as well go to one of the ‘best places in Manchester!’ We hadn’t booked, so upon arrival we were shown into the ‘Champagne Bar’ to wait for a table. Having spent the morning shopping, the prospect of sitting down and having a glass of something bubbly appealed. What didn’t ‘pop my cork’ was the shabby décor. 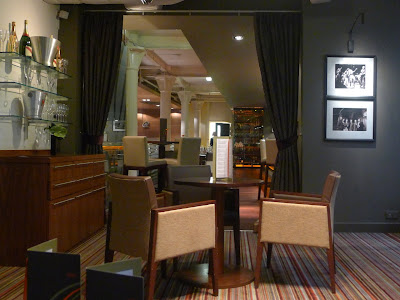 It all depends on what your expectation of a ‘Champagne Bar’ is – if the expectation is a bar that has a decent selection of champagnes and accompanying cocktails then you’re in luck. If however, you expect a swanky, swish and chic setting, the threadbare chairs at ABode may dissatisfy. Sure they've put up a trio of glass shelves with a couple of champagne buckets, some bottles and a few glasses, but as my wife said, ‘They may as well have put a tail on it and called it a weasel.’ 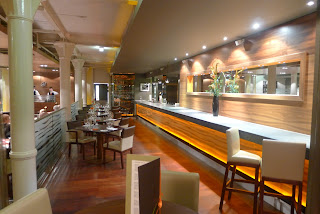 At lunchtime, as well as the À la Carte, they offer a three (£13.50), four (£18.00) or five (£22.50) course ‘Grazing Menu’ – we selected the five, naturally. We were glad we did, I’m not one to complain about portion sizes, especially considering the highly competitive prices, but even after the five we were left hungry! (Even though I had devoured a bag of Peanut M&Ms and some Minstrels on the journey into Manchester).

It’s not just the portion sizes that were a let down to us, although each of the dishes were artfully arranged and technically (for the most part) well cooked, we found them to be largely lacking in flavour. Our opinion being that most of the courses had seasoning issues and others were just plain bland – some chefs seem to have a knack of getting the most out of their ingredients, showing them at their best and maximizing flavour – we just did not feel this was the case here. All in all, very disappointing for a restaurant with Michael Caines’ name over the door and Chef Mark Rossi (formerly of the two Michelin starred Gidleigh Park and The Square and the three starred Waterside and Chez Nico) as Executive Chef. 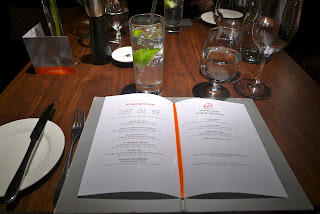 It was not just the food that was bland, aside from the ‘meet and greet staff’ (who were very pleasant and efficient) much of the service was also lacking. The staff presenting the dishes seemed disinterested; mumbling some cursory comments about the constituents of the course, most of which we failed to hear or comprehend. The bill came to £77, including the 12.5% service that was already added – I left £80 because we couldn’t be bothered to hang around. On reflection, I wish I had asked for the service amount to be removed from the bill and just paid for the food. 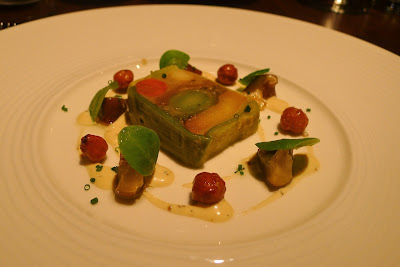 With regards to the actual dishes, unusually, my wife and I selected the same (with exception of the dessert), the first one being the beautifully presented Terrine of roasted winter vegetables. This course did look the part and, being well cooked, was certainly one of the better dishes – the only criticism, our belief that the terrine seemed ever so slightly under seasoned – if the following courses were better I probably wouldn’t have even mentioned it. The Truffle Mayonnaise was good, whereas the Caramalised Hazelnuts were excellent. They added a delicious sweetness and a crunchy texture - the best thing about the meal! 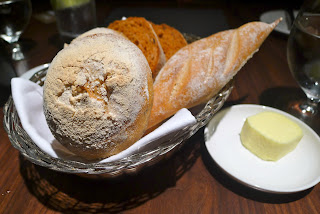 To go with the starters, we were served a trio of breads. The Tomato and Olive bread was a little dry the others though were delicious - I do love the metal baskets. 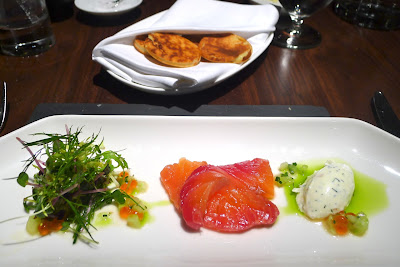 Next up was the Beetroot cured trout. The best elements of the dish were the delicious blinis and the lovely little dill and roe dressed salad. The biggest disappointment being the ‘trout’ itself, as I found the curing to be (politely put) ‘very subtle’ – preferring it when the beetroot cure imparts more of an earthiness and sweetness. Similarly, I felt the horseradish and dill crème fraiche also could have hit with a bit more impact – Maybe some more horseradish? A twist of lemon? Something! 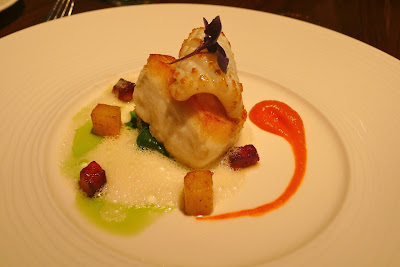 We then opted for the Pan fried hake. With its red pepper and chorizo purée, pan fried squid and lemon foam this dish should have been a winner. What made it a loser for me was the rubbery squid and lacklustre ‘lemon’ foam. On the plus side, the piece of Hake itself was perfectly cooked, as were the rest of the trimmings. 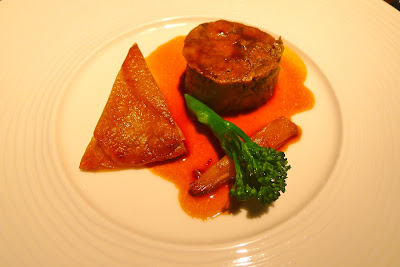 Surely, the next dish, ‘Orange glazed veal shin with a veal jus’ had to deliver on flavour? Alas, not. I was expecting a rich and flavoursome offering but once again was regrettably underwhelmed. To be fair, the shin was in fact deliciously tender and very unctuous and the Pomme Anna was nice and buttery – once more, the apparent lack of seasoning being our major issue. 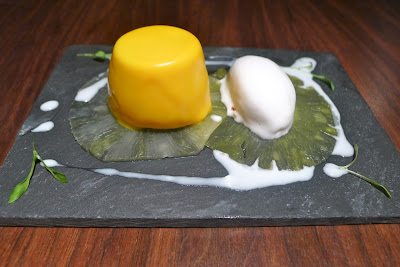 My wife’s chosen dessert was the Mango panna cotta – the pineapple carpaccio was fresh and tasty; the coconut sorbet also had good flavour with a wonderful smooth finish, embedded with crunchy shards of coconut. The panna cotta itself had good texture but, for me, lacked the anticipated tropical tang. 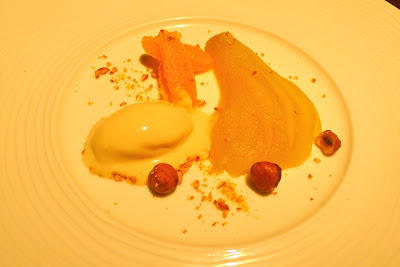 For my starter, I plumped for the Poached pear. Another dish that I felt was let down by the main component, which was without pizzazz. More positively, the nut-brown butter ice cream tasted good (but its melting state hinted that it may have sat on the pass for a little too long and went some way to explaining the rather long wait.) Another positive was a welcome return for the caramelised hazelnuts! 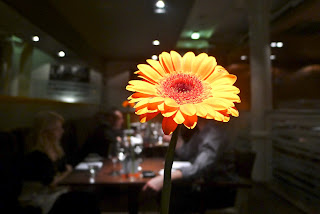 Talking of returns, when we’ve had a disappointing meal, I suppose the principal question is, ‘Will we return?’ The simple answer, taking everything into consideration is, ‘Yes we will.’ I am basing this on the fact that we have eaten there before and had enjoyed a better overall experience and food. Also (perhaps sadly) it does remain one of the few 'fine dining' restaurants in the centre of Manchester and as long as Michal Caines’ name is above the door you have to expect quality. 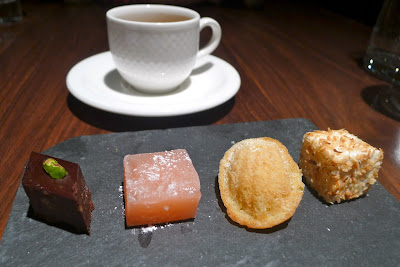 One thing that certainly had quality was my cup of Ristretto and the delicious Petit Fours: a Dark Chocolate with Pistachio, Turkish Delight, Coconut Marshmallow and, my personal favourite, a dinky Honey and Lemon Madeleine.