Like any restaurant with 2 Michelin stars and a ranking in The World’s 50 Best (No.6), Mugaritz was always “on my radar”. Then I met and shared a meal with Per-Anders and Lotta Jorgensen. Together they founded FOOL “the best food magazine in the world” (my quote).

As well as editing FOOL, Per-Anders is probably “the best (food) photographer in the world” (his quote), and it’s his photography in Chef Andoni Luis Aduriz’s cookbook that helped Mugaritz move to the top of my list.

Many times I’ve said how ‘expectation’ can play a role in my enjoyment of a restaurant – too high may result in a let down; conversely, low expectation can lead to being pleasantly surprised. I’ve read many mixed reports of Mugaritz but somehow I just knew I’d “get it”.

Mugaritz seems to have a reputation as a love it or hate it kind of place. When eating a tasting menu with an excess of twenty dishes, it's reasonable to assume that there may be one of two that will not "hit the spot" but I loved every mouthful. 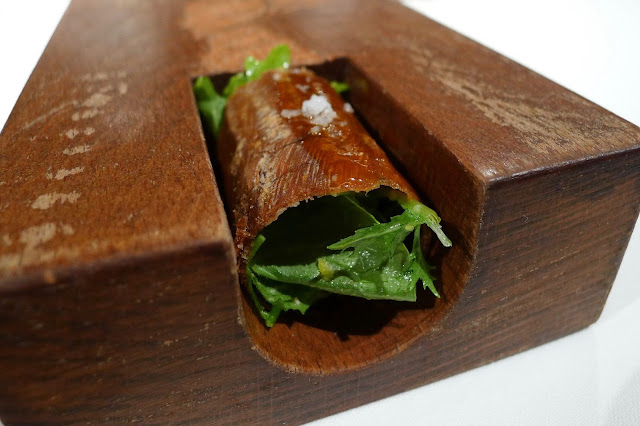 Lacquered duck neck with herbs from the garden (Cuello de pato locado con su jugo, hierbas de la huerta) – I loved this one, for something so light it had deeply rich and sticky umami flavours which were contrasted by the freshness of sprout, nasturtium and radish leaves from the Mugaritz garden. 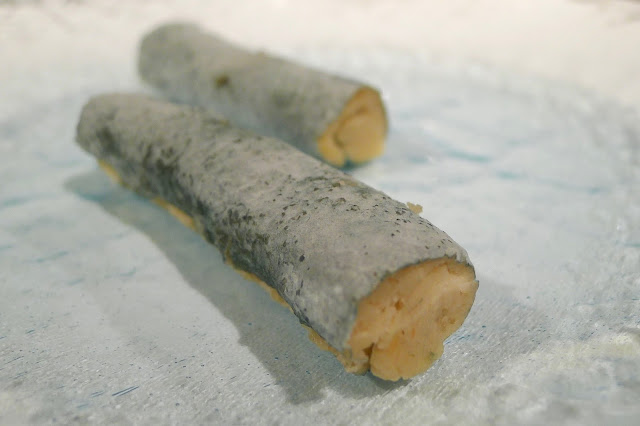 Blue bread and anchovy (Pan azul y anchoa) – made to resemble a blue cheese, this dish was essentially a mouldy anchovy sandwich. As delicious as it was, I wouldn’t recommend trying to recreate this dish at home with a tin of anchovies and some rotten Warburton’s. 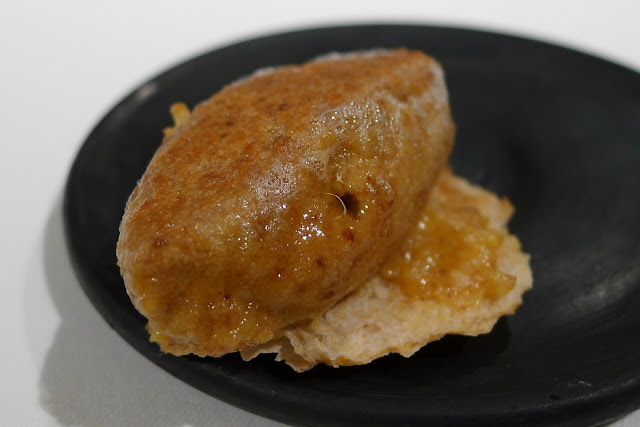 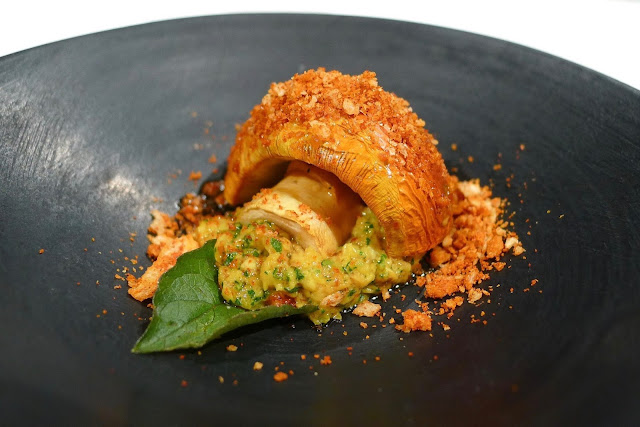 Caesar’s Mushroom with sesame (Amanita Caesarea) – Amanita mushrooms are the kind that the Smurfs live in; this one came halved with a crust of pine nuts and red pepper powder. A citrusy cream added an acidity which balanced the earthiness. 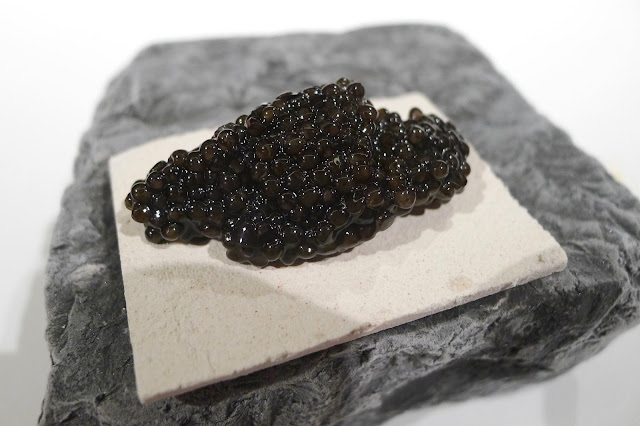 Tiger nuts with caviar (Chufa con caviar) – I’ve not come across tiger nuts before, however a little research tells me that they are in fact not a nut at all but a tuber. They are most commonly used to make Horchata. In this instance they had been used to make a wafer like tile, topped with caviar. 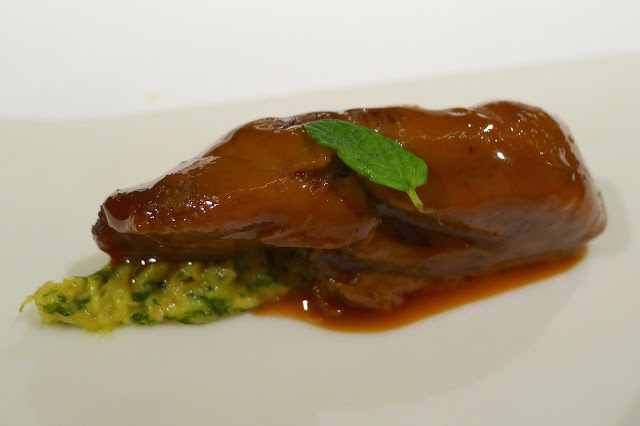 Stewed and aromatic lamb’s tongue (Lengua de cordero guisada y perfumada) – another corker of a dish for me (I got to eat my wife’s too as she’s squeamish about tongues, from animals). More rich, umami flavours comong from another glossy glaze; this time lifted with a little mint. 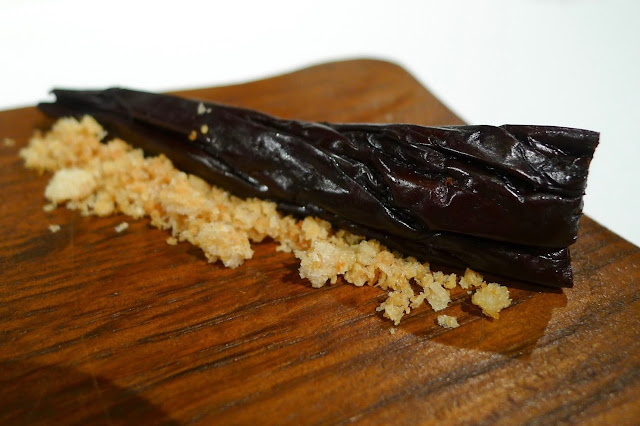 Vegetal bestary (Bestiario vegetal) – served alongside a garlic and almond crumb, this dish consisted of shrivelled aubergine skin with smoky and peppery flavours. 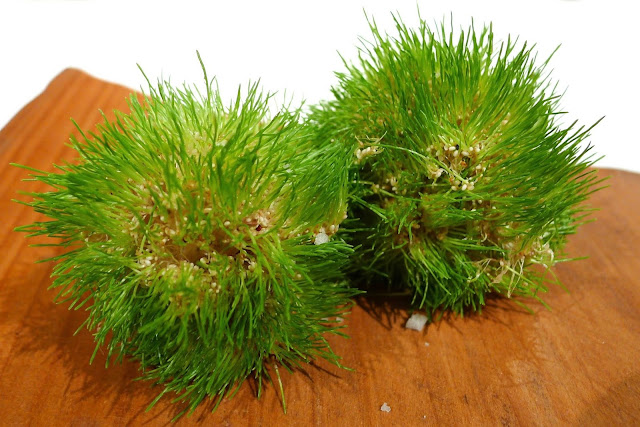 Vegetable tiles: A handful of Highland grass (Teselas vegetales: Un manojo de semillas y brotes de teff) – resembling a Furby, this was one of the most delightful things I’ve ever been served. A creamy hazelnut centre lay within the tufty outer, made from a species of African ‘lovegrass’ called teff. 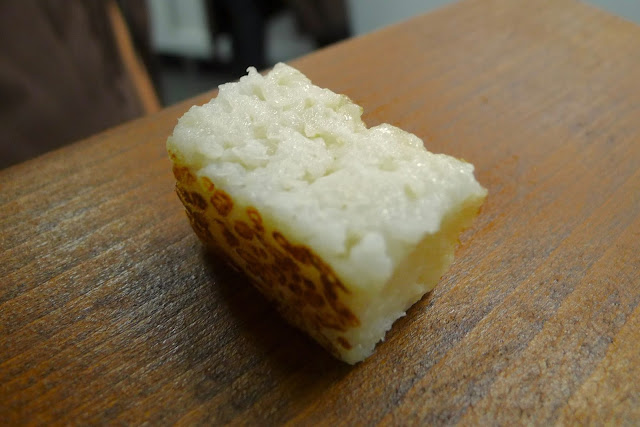 At this point in the meal, I accepted the invitation into the kitchen but only because one of the dishes was to be served there. My wife declined the offer so they served her portion of fermented rice at the table. 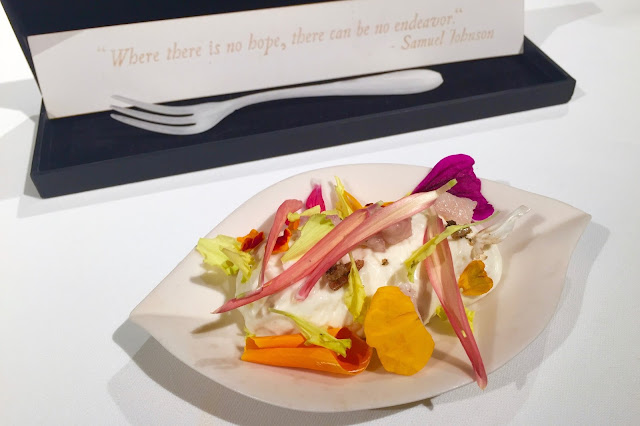 …decadentia… another extraordinary dish. A smoked eel mousse came festooned with petals from hibiscus, mallow, dahlia and basil flowers – the brilliance being you could actually eat the fork! It’s certainly one way of cutting down on the washing up. 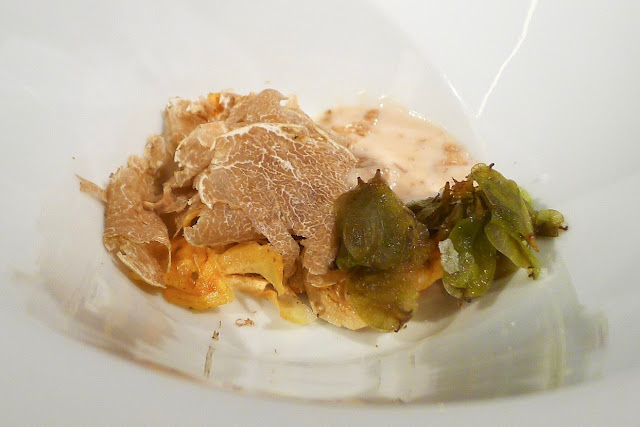 Chestnut, truffle and garlic (Castañas, trufas y ajos) – after the previous dishes, the next dish disappointed in its creativity, fortunately what it lacked in this area, it more than made up for in flavour! Along with the crispy garlic and and ultra thing shavings of truffle, the appearance of fermented acacia leaves particularly pleased. 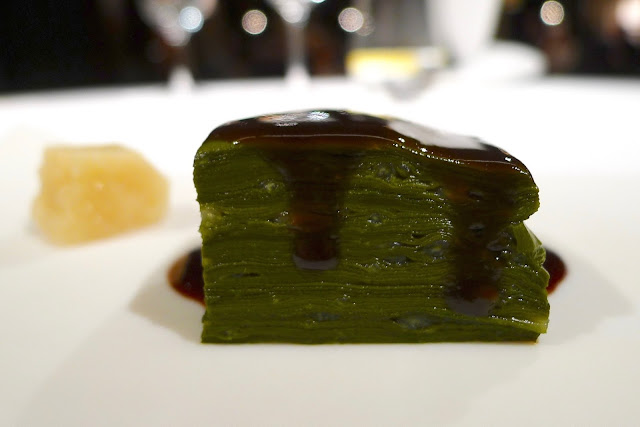 A thousand leaves… (Mil hojas) – served with a cube of the region’s famous Idiazábal cheese, the “thousand leaves’ referred to the layers and layers of chard leaves cooked in a beef stock and glazed in a lustrous beef reduction. 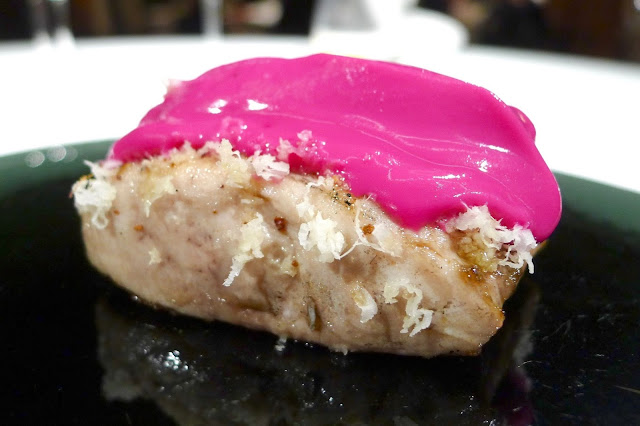 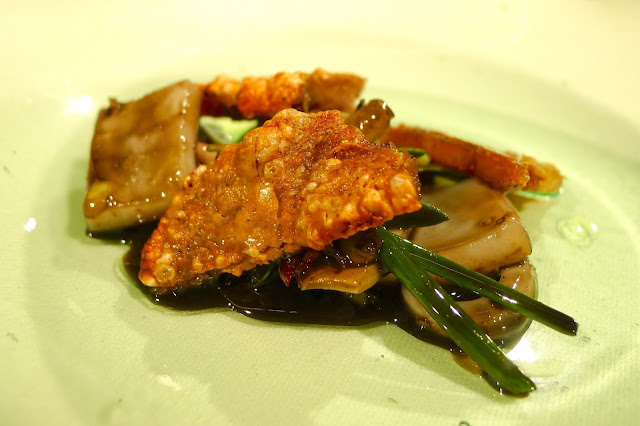 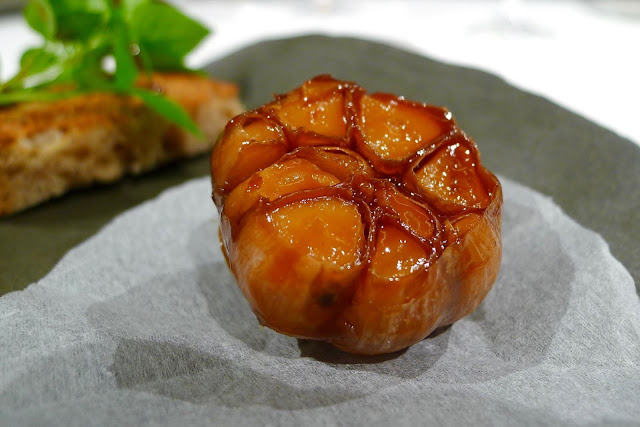 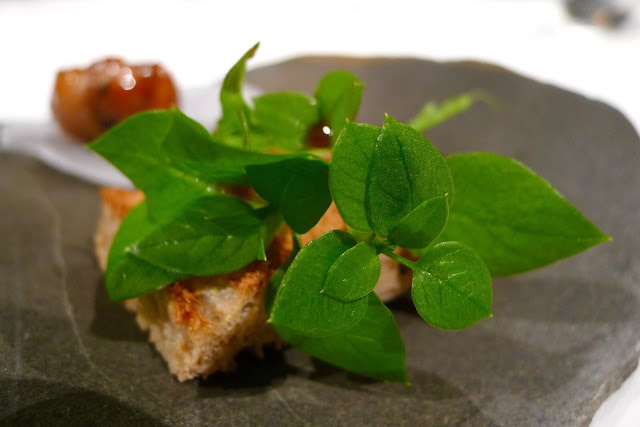 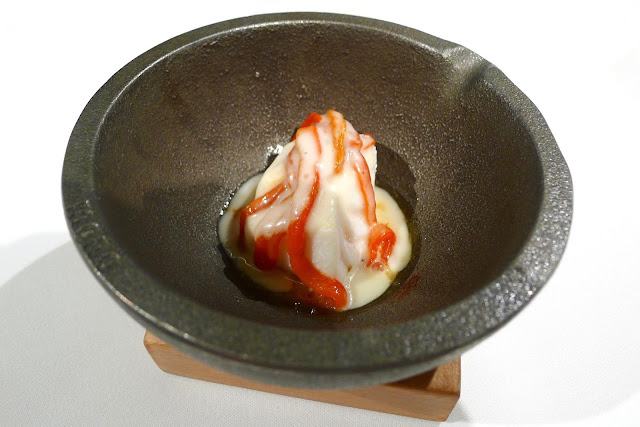 Grilled fish and beef essence (Prescado a la parrilla y esencia de chuleta) – a beautiful piece of grilled fish with a sauce made with beef fats. It worked for me. 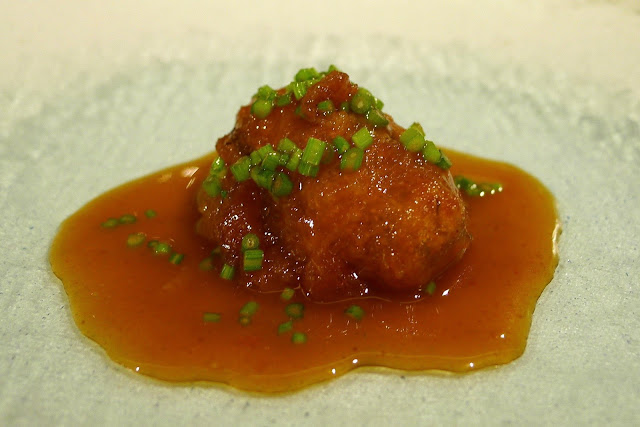 Sea anemones and vegetable touch (Ortiguillas y acentos vegetales) – a speciality of Cádiz, I’ve had breaded sea anemones before but this one had been elevated to another level. 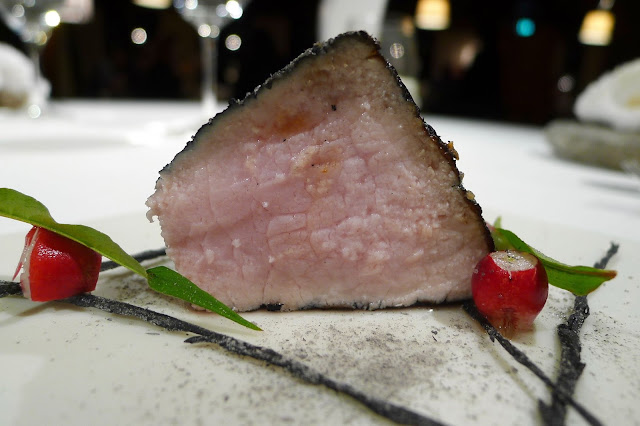 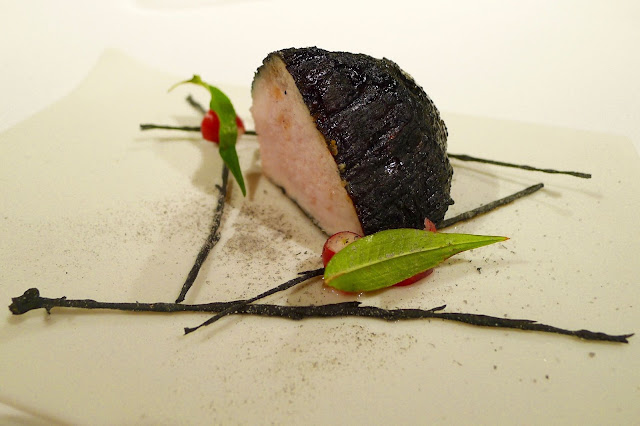 Veal, radishes and vine shoot (Ternera, rabanitos y sarmientos) – a Mugaritz classic, I’m so glad the milk fed veal was served as part of this menu. The meat was so juicy and sweetly flavoured, which contrasted perfectly with the bitterness from the charred vine shoots and sharpness of radish. 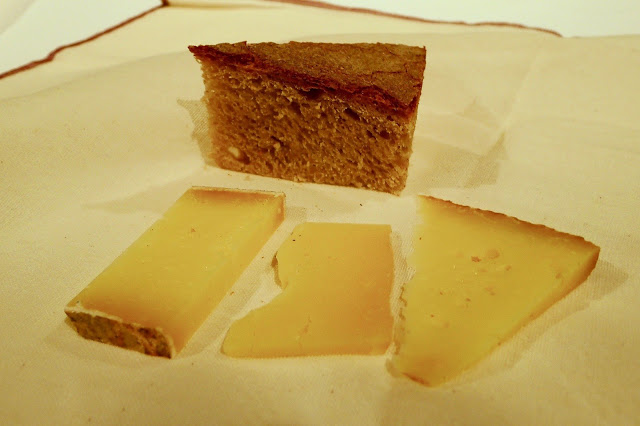 The cheese (El queso) – served in a folded piece of muslin, I loved the simplicity of the cheese course. A sheep’s cheese similar to an Idiazábal, the pieces came from cheeses matured for 3 months, 6 months and 12 months respectively. This allowed for their individual nuances to be appreciated; such a simple, yet great idea. 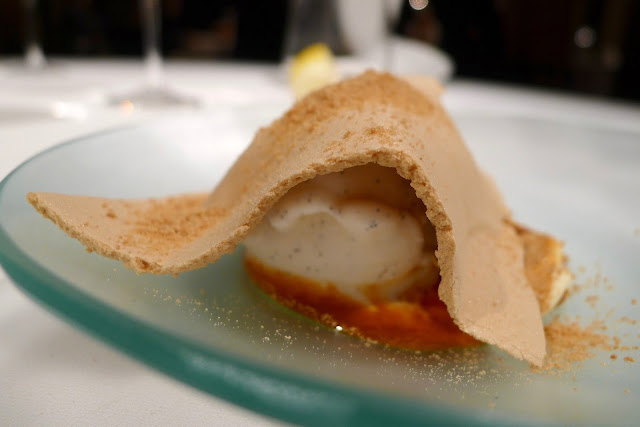 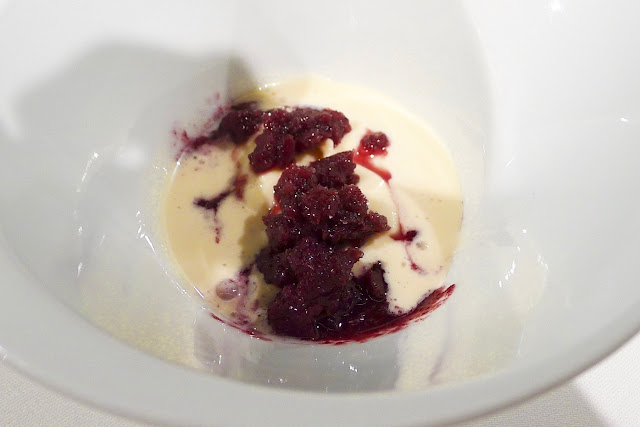 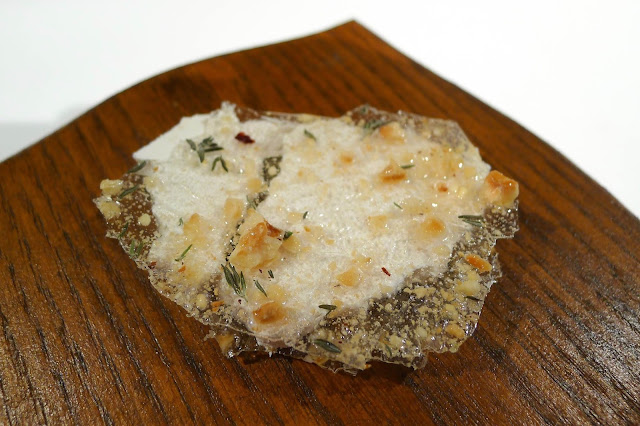 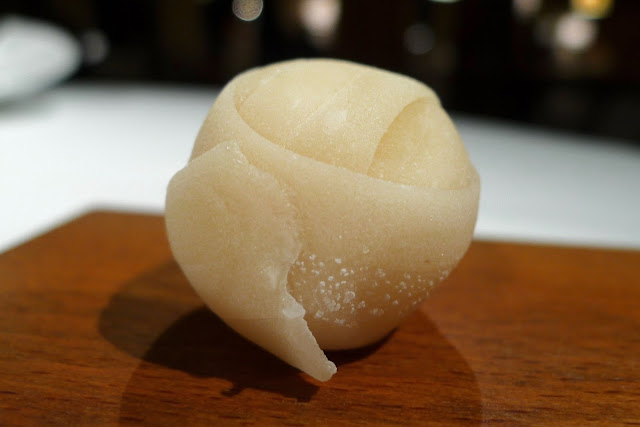 Jasmine & hay (Ovillo de jazmín y heno) – I love Japanese mochi sweets so this was a pleasant surprise. The jasmine flavour was distinct with a considered use of hay. 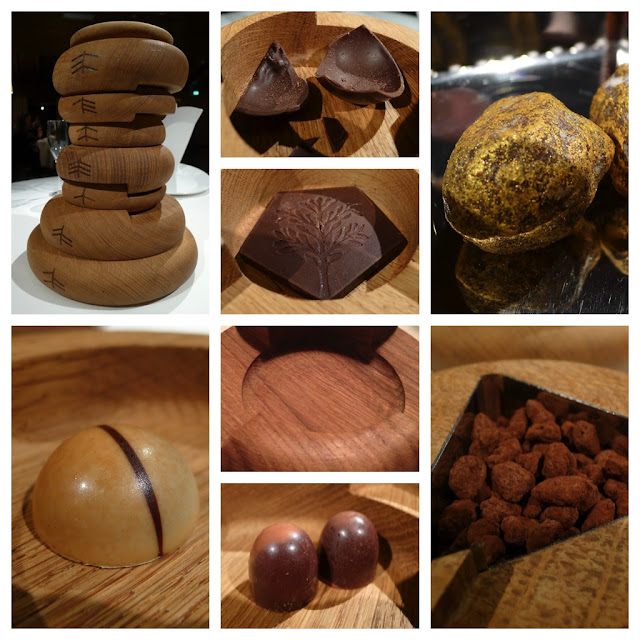 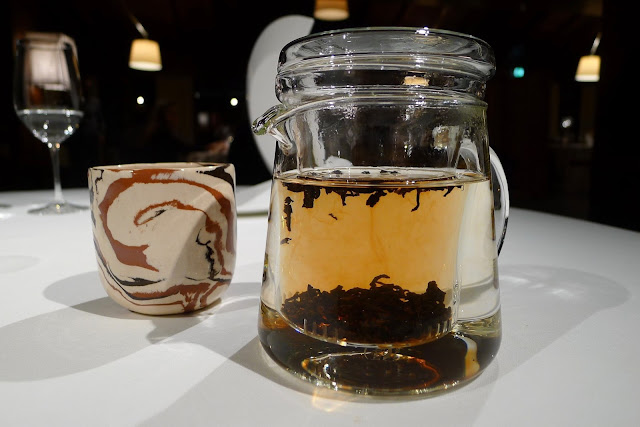 We’ve booked to return to San Sebastián / Donostia in May and Mugaritz will be on the itinerary again!