In ‘Part 1’ (see here) of this, my ‘A beginner's guide to Saigon’s Street Food’ I focused on the crowd pleasing favourites such as bánh mì, phở and gỏi cuốn (summer rolls); plus a few other dishes that should not be missed when visiting Vietnam.

In Part 2, I’ll cover ‘The Next Steps’ – dishes that may not appeal to the majority of Western palates. The final entry will be about Cẩy tơ (dog meat). I understand that breaking this “taboo” may be a step too far for many so I’ll warn you before you scroll down and accidentally see some pics of cooked pooch! 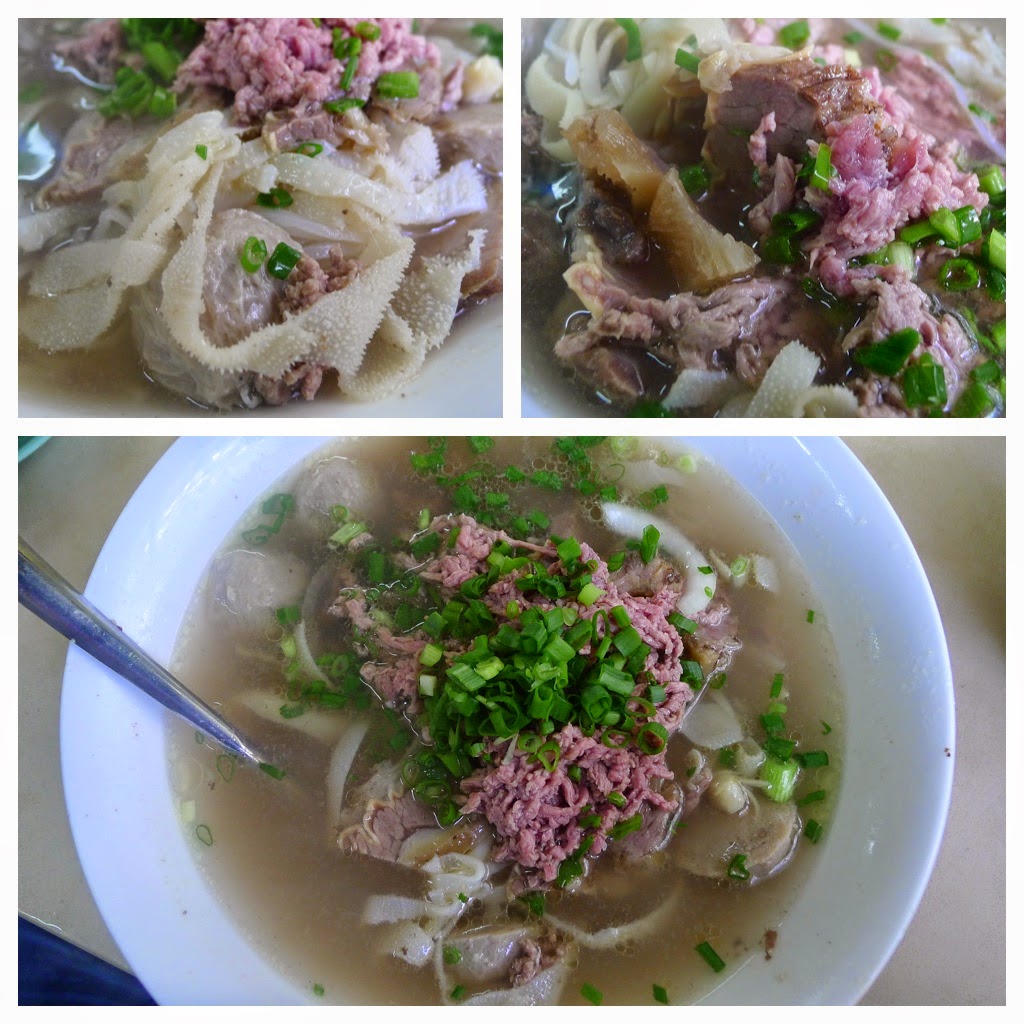 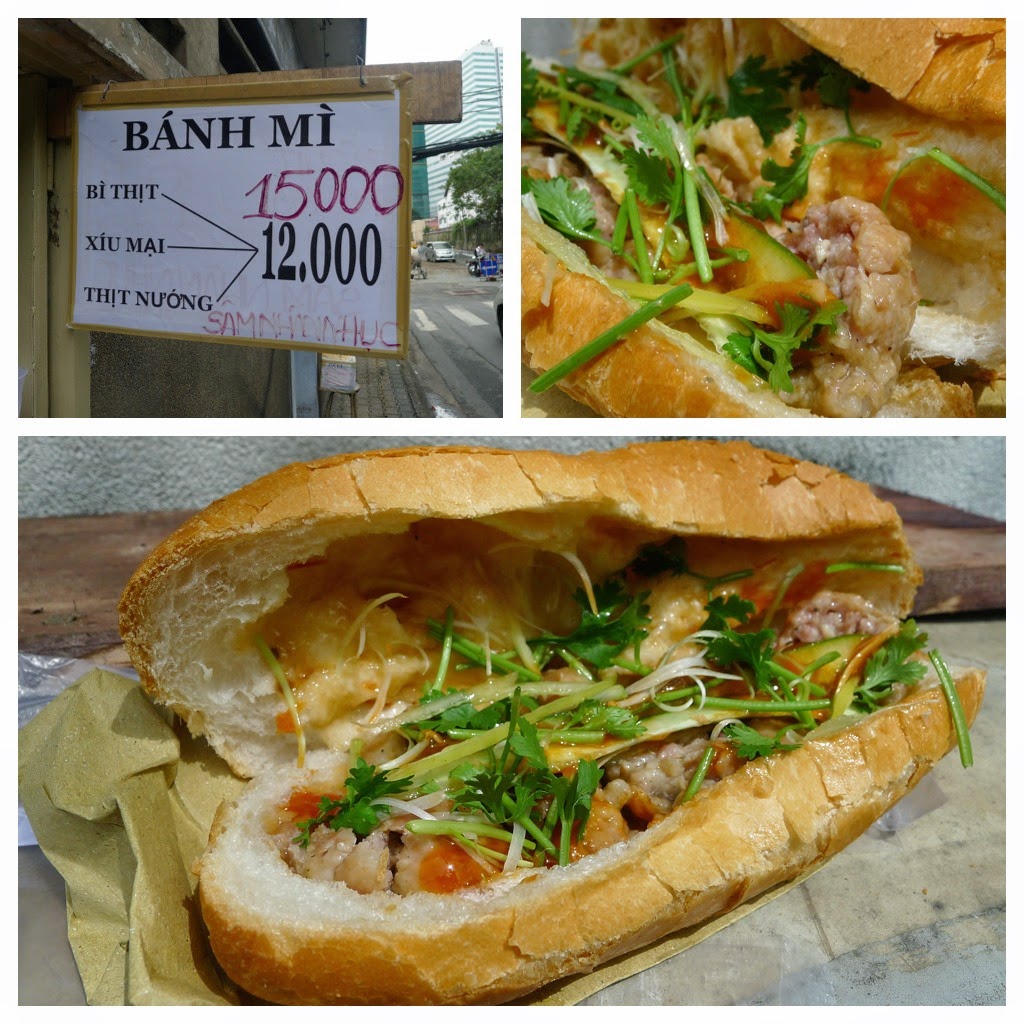 Bánh Mì Xíu Mại @ Bánh mì (6 Nguyễn Siêu, Quận 1)
Another safe dish ingredients wise but worthy of “The Next Steps” as it’s slightly less common is the Bánh Mì Xíu Mại – basically a meatball version of the traditional Bánh Mì – think of the Meatball Marinara from Subway but better! (If you’re wondering how it’s better… for a start, the meatballs actually had the texture of meat!) 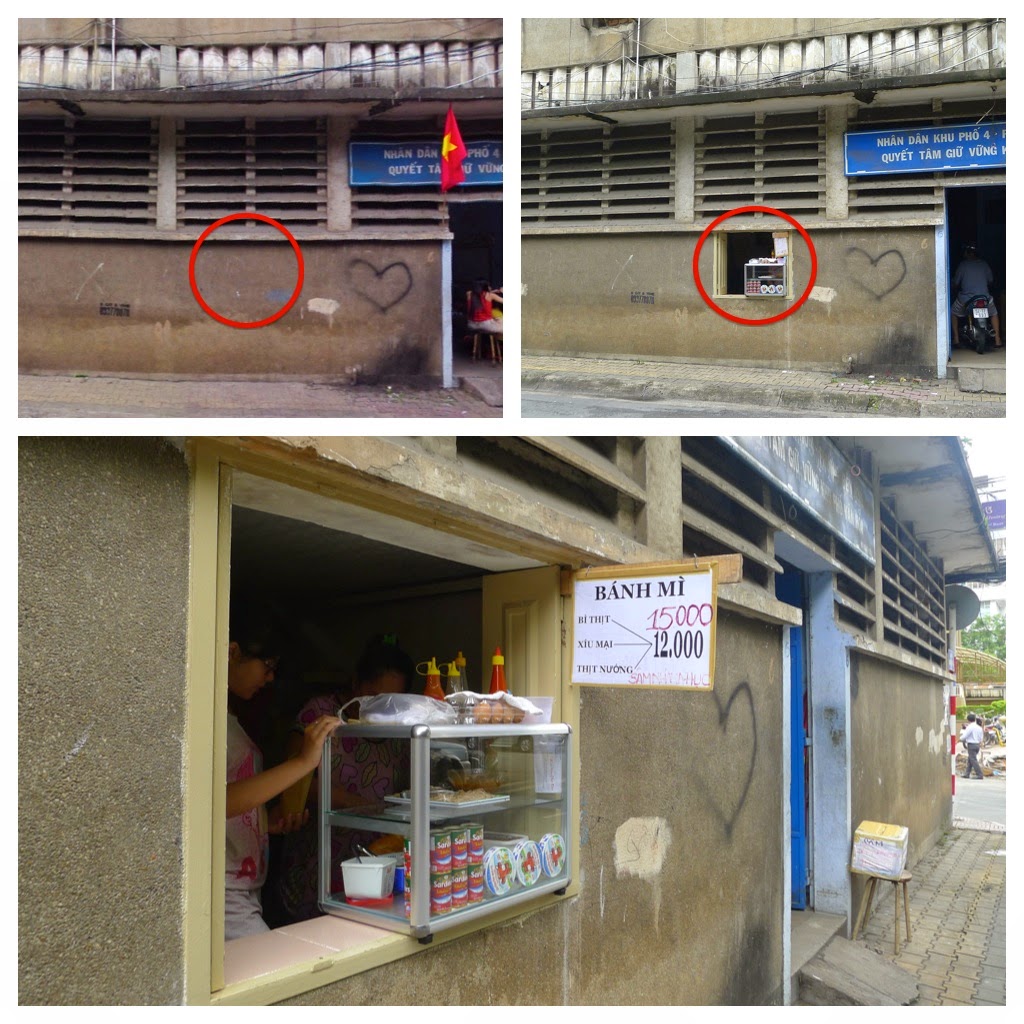 What I particularly like about this place is the fact that the owners have cut a hatch into the wall of a bedroom / living space and they’re serving their Bánh mì from there. If you look at the location on Google Maps from March 2014 there is no window… now there is a shutter from where mother and daughter delight passers by with their Bánh mì selection… a real window into Vietnamese life and culture. 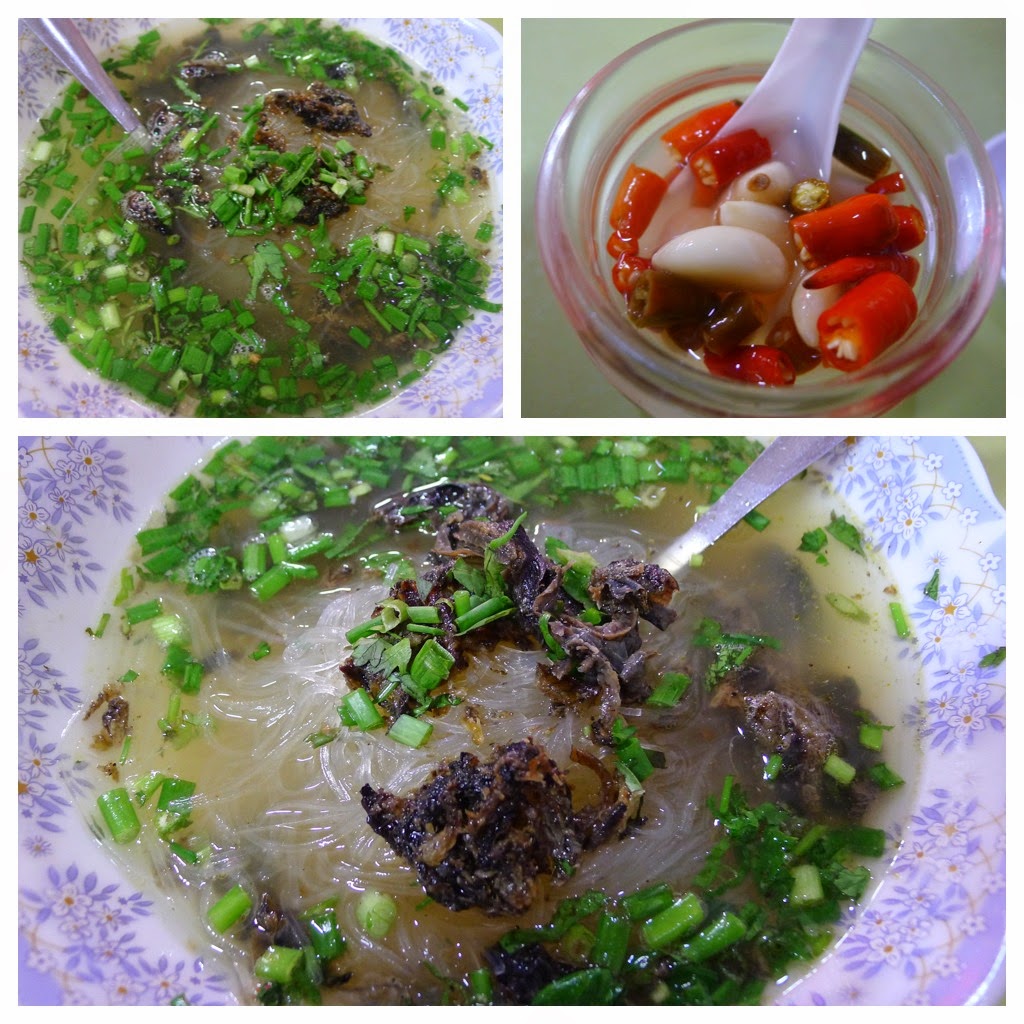 Miến lươn (eel) @ Cát Tường (61 Thủ Khoa Huân, Quận 1)
Getting a little riskier, we have Miến lươn from the centrally located Cát Tường; their version is made with a rather skimpy serving of dried eel but I’ve read that some places make it with fresh ones. I reckon there has to be better versions available in the city but I didn’t get a chance to seek them out. 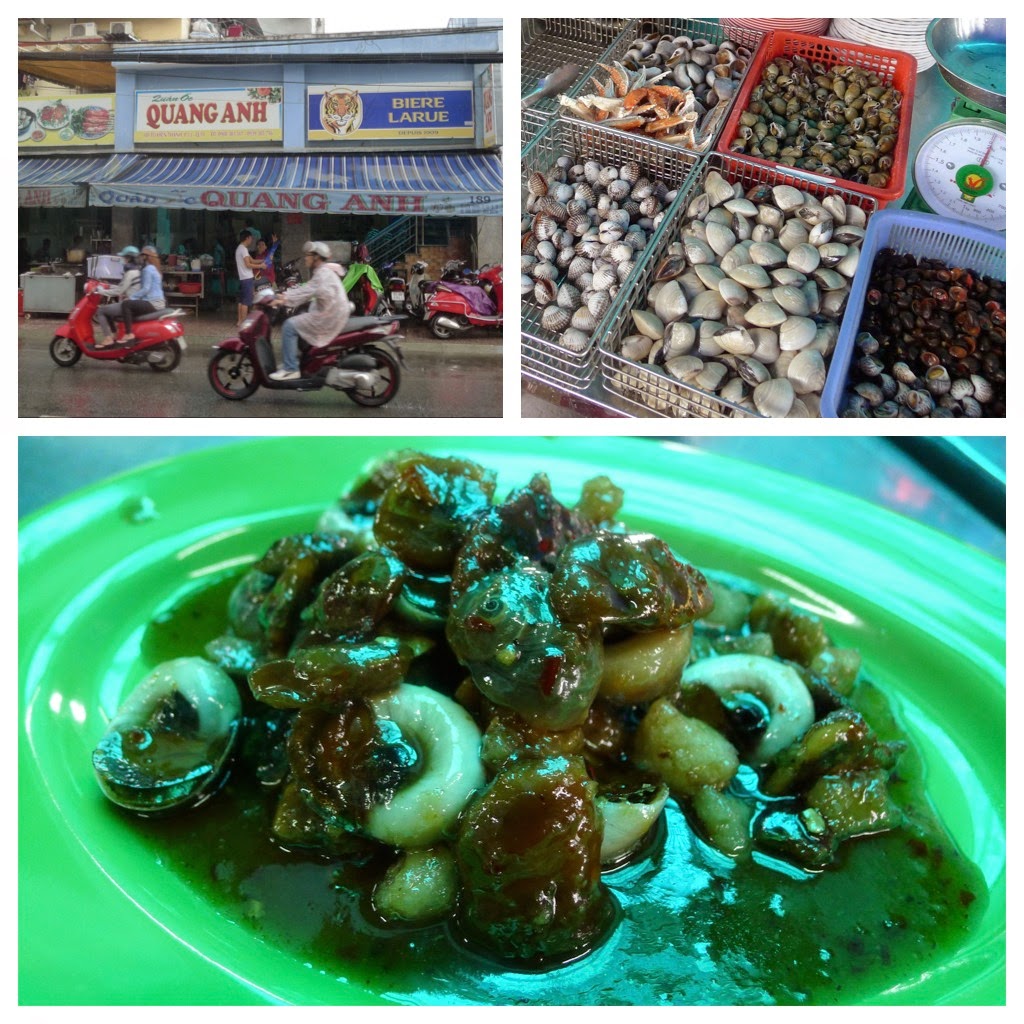 Ốc mỡ xào me @ Quán Ốc Quang Anh (189 Tô Hiến Thành,  Quận 1)
Until I had walked the streets and markets of Ho Chi Minh, I didn’t realise how many wonderful varieties of snails existed. Having seen them in the markets, I took to the Eating Saigon website to find somewhere that specialised in said gastropods – it seemed the place to go was Quán Ốc Quang Anh. With screen shot saved onto my phone I headed off to District 10, found the restaurant and pointed at the snail dish that I desired (much easier than trying to decode the menus with my limited Vietnamese vocabulary and dodgy pronunciation). I was soon eating a fab plate of Common Periwinkle (ốc mỡ) covered in a sticky sweet garlic (tỏi) and tamarind (me) sauce. 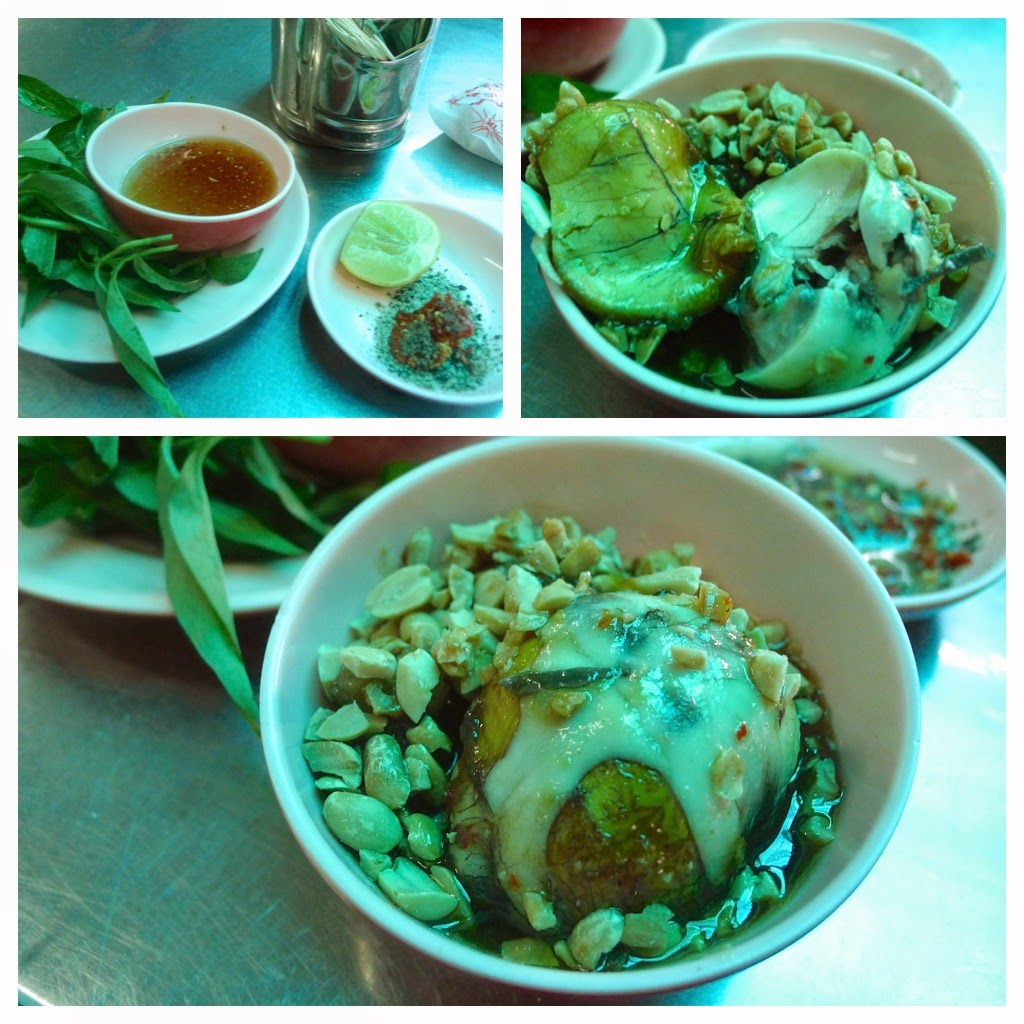 Hột vịt lộn xào me @ Quán Ốc Quang Anh
Whilst waiting for my snails, I noticed that Quán Ốc Quang Anh also served Hột vịt lộn – more commonly known as ‘balut’ in some parts of the world, Hột vịt lộn are fertilised duck embryos. The fact that they are cooked “alive” puts some people off. If you can get over the mental image of a cute little duckling, I recommend you try them like this, swimming in a sweet tamarind sauce with roasted peanuts and served with Muối tiêu chanh – a dipping ‘sauce’ made by mixing lime with salt, pepper and chilli. 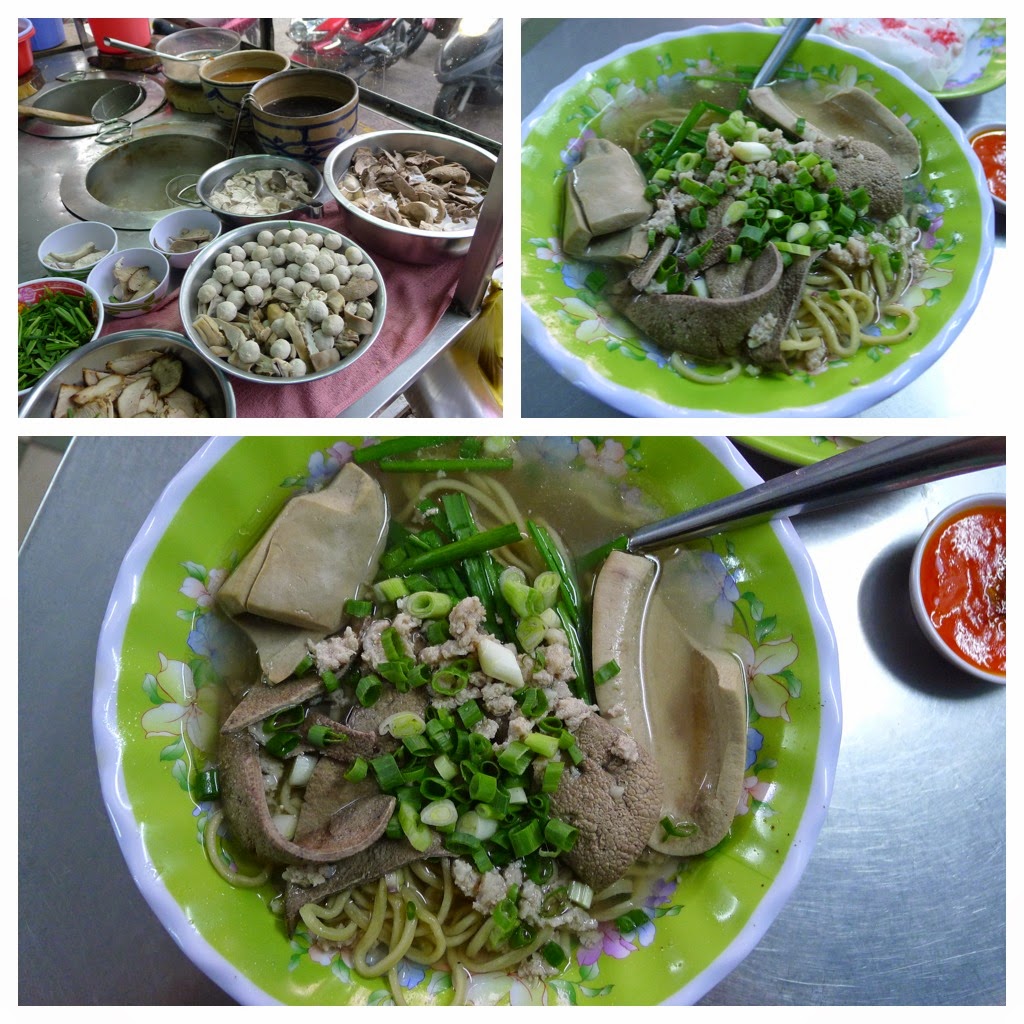 Cật Gan Vịt (duck kidney & liver) @ Mì Vịt Tiềm (3 Hoàng Diệu, Quận 4)
In Vietnam not all ducks (vịt) are eaten before they are born. Some are allowed to grow up, lead happy lives swimming and quacking before they are dispatched to be made into delicious broths. Sometimes their kidneys (cật) and (gan) livers are added to these broths – when that happens it's a very special thing! 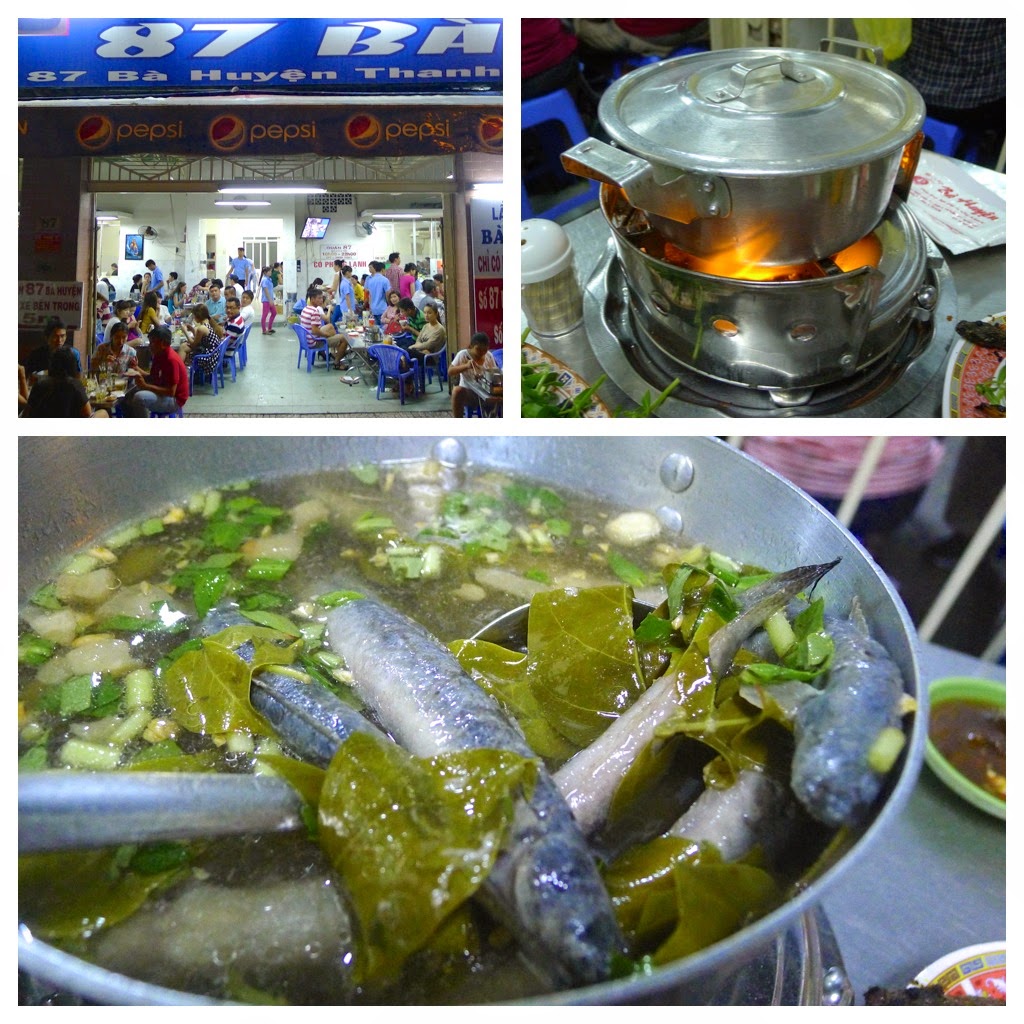 Lẩu cá kèo (hotpot with goby fish) @ Lẩu cá kèo (87 Bà Huyện Thanh Quan, Quận 3)
Lẩu refers to the hot pot that are communally kept bubbling at the centre of the table. These restaurants are highly sociable places, mainly serving large families or groups of friends. Cá kèo refers to the ‘live’ Vietnamese Goby fish that are popped into broth. 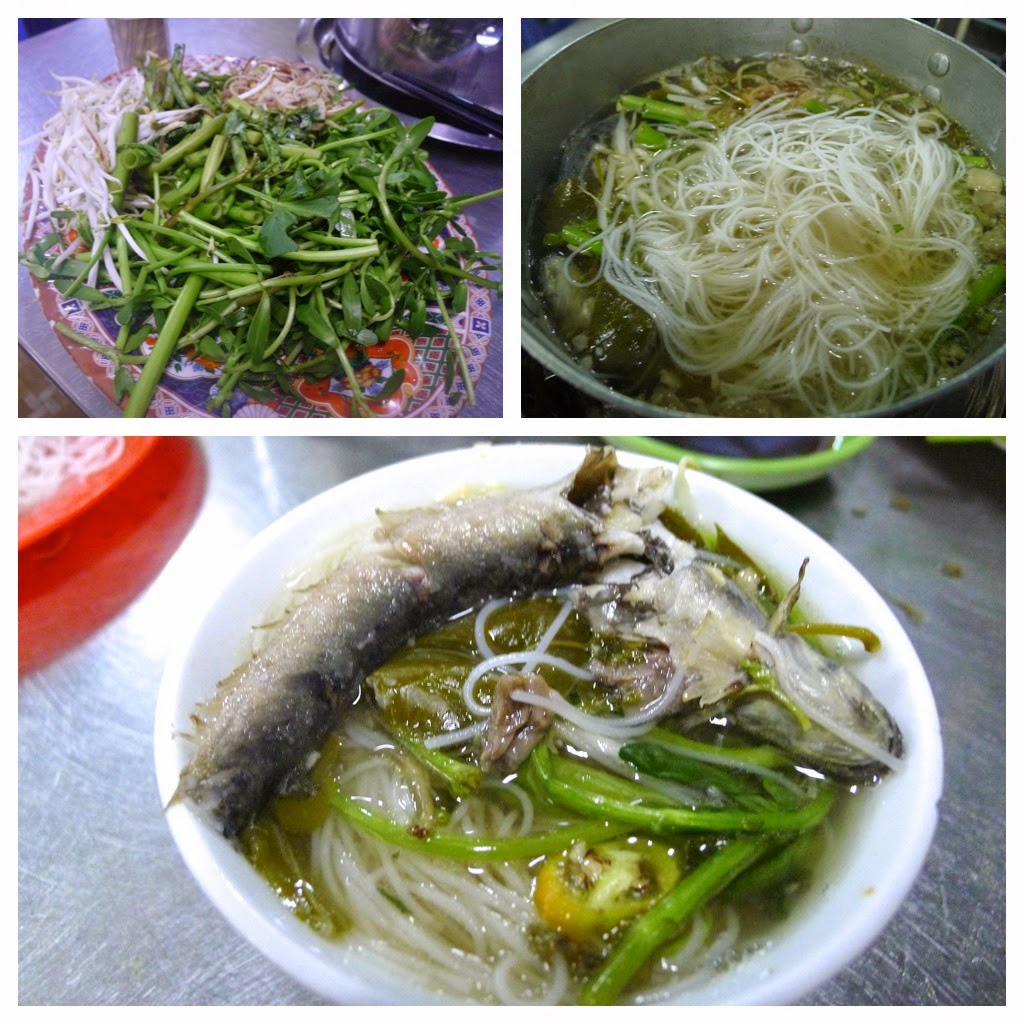 When the Cá kèo stop wriggling, they are ready to eat; along with the complex broth that has sweet and sour flavours coming in the main from me (tamarind) and lá giang (river leaf); the broth also and bitterness from rau đắng (water hyssop) and lots of lemongrass (sả). The fish are eaten whole; but be warned, they have some pretty crunchy bones, especially in the head. 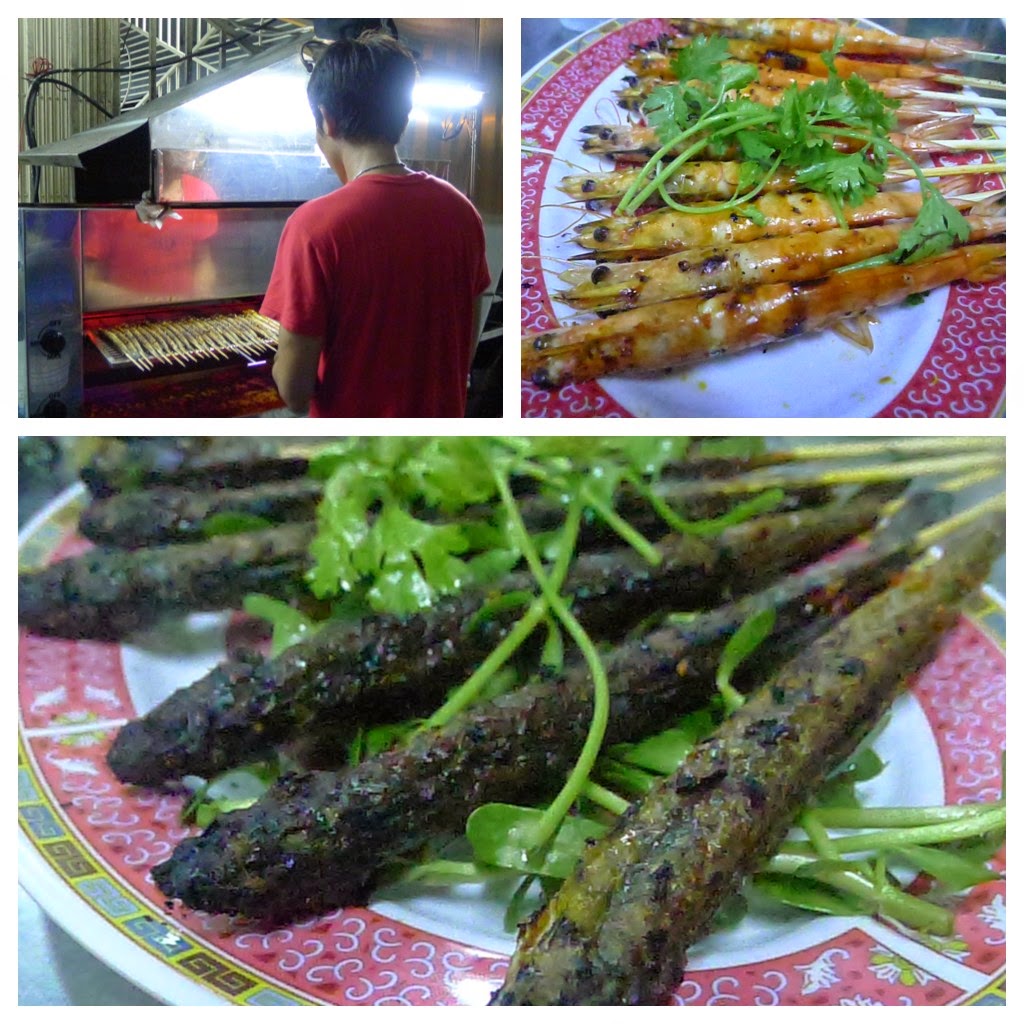 Cá kèo nướng & Tôm sú hấp @ Lẩu cá kèo
As well as cá kèo in the hot pot, we also ordered some that had been grilled on sticks, along with prawns served in the same way.  These were served with a Muối tiêu chanh – a dipping ‘sauce’ made by mixing lime with salt, pepper and chilli. 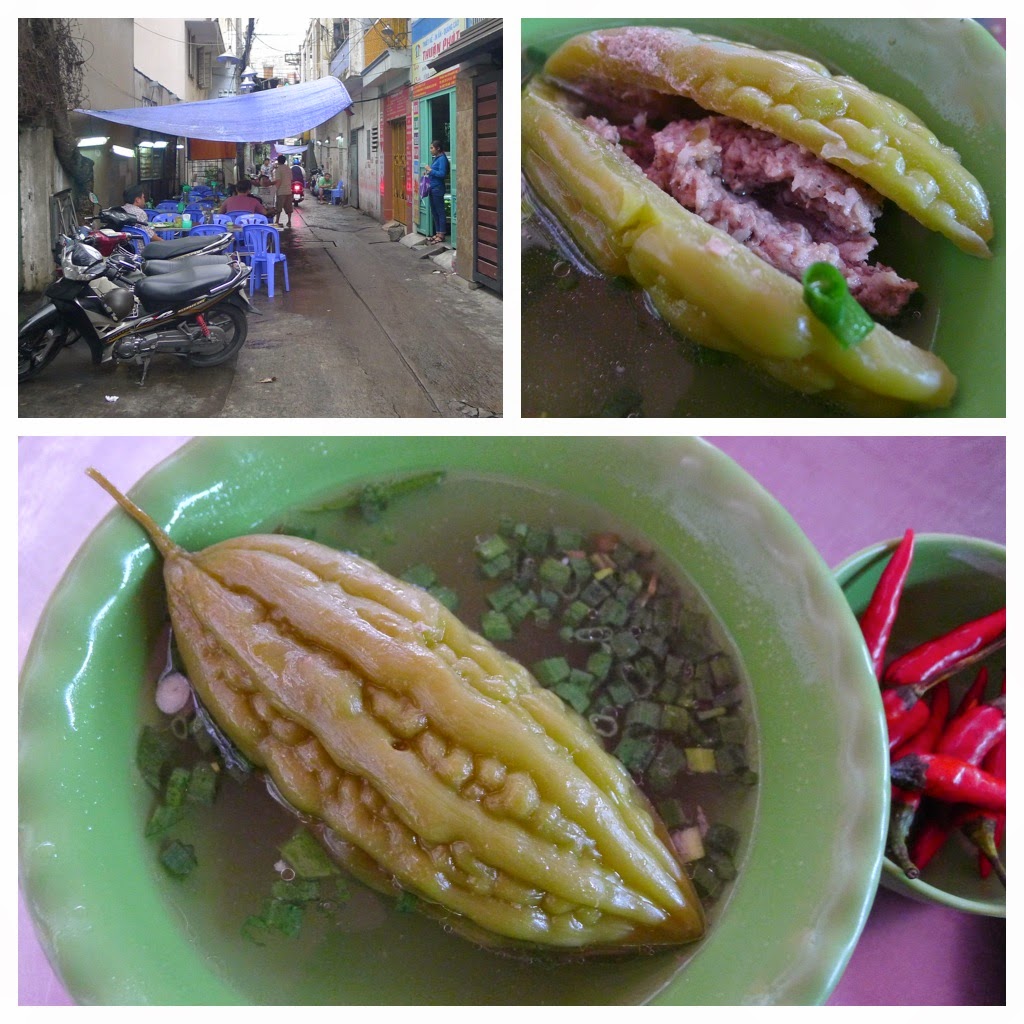 Canh khổ qua @ Cơm Tâm 390 (390 Cách mạng tháng Tám,  Quận 3)
As a lover of bitter and sour flavours, Canh khổ qua (bitter melon soup) is right up my alley. Stuffed with pork and wood ear mushrooms there are no ‘unusual’ ingredients here but the bitterness of the vegetable may be too much for many people… especially those with a sweeter tooth. 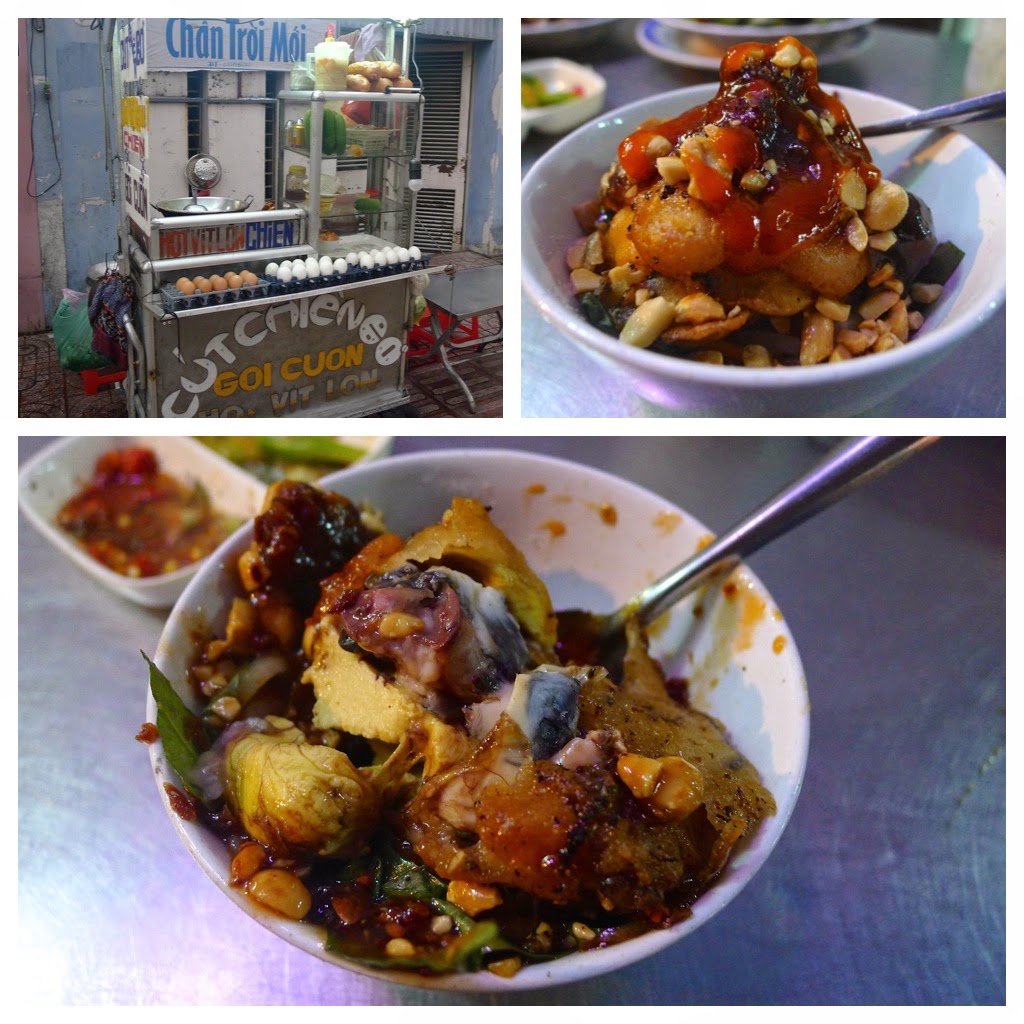 Hột vịt lộn xào me @ Cútchiêneo (In front of 368 Cách mạng tháng Tám, Quận 3)
Walking along the street after visiting Cơm Tâm 390 we stumbled across a smiling street food vendor who had set up a tiny table and two small plastic stools. I noticed that she sold Hột vịt lộn. Having enjoyed them before I ordered some cooked and served with tamarind as well a couple in their shells. Hột vịt lộn @ Cútchiêneo
I’d not yet tried the Hột vịt lộn presented in their shells, so the woman on the stall kindly gave me some tips on how to eat. First a hole is made in the top and the liquid content then sucked out. After enlarging the hole, the ‘yolk’ and hard chewy white can be eaten with the accompanying herbs and muối tiêu chanh. This leaves the final delicacy of the duck foetus. 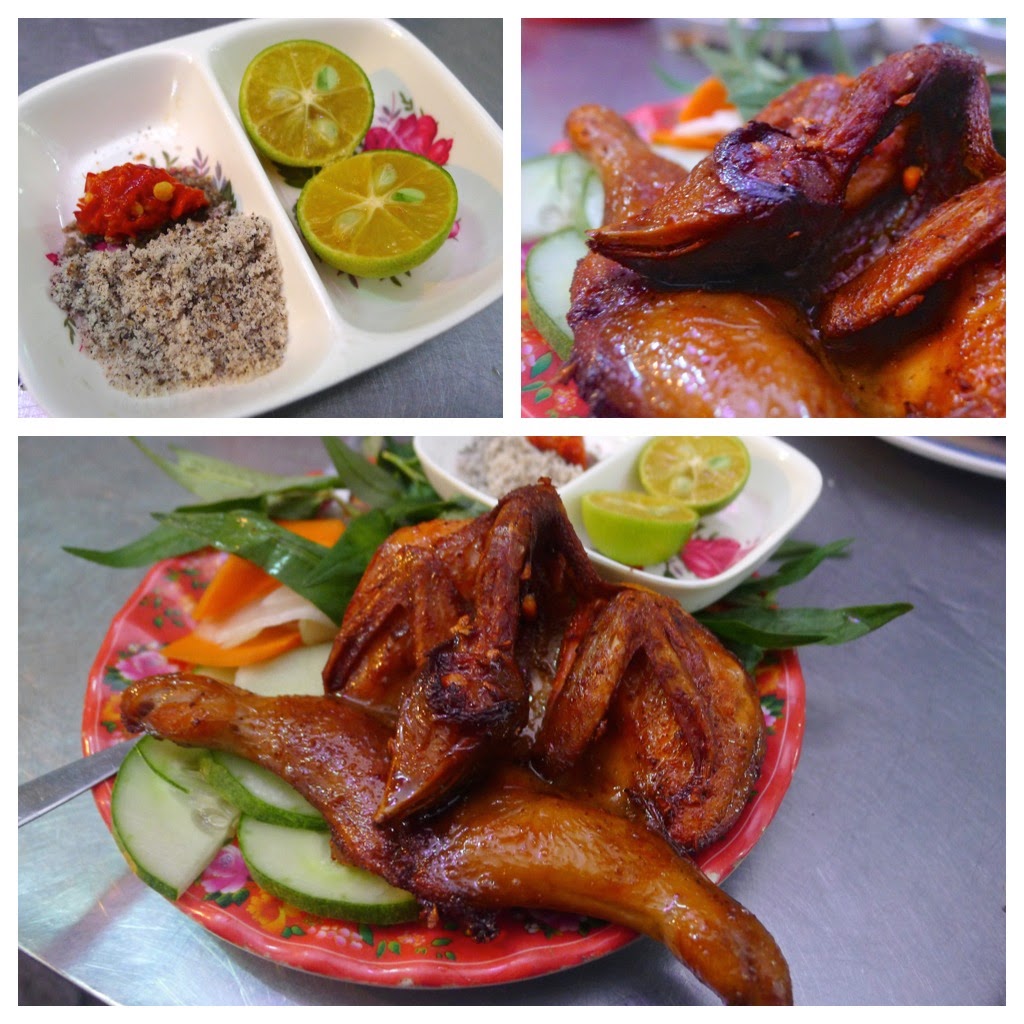 Cút chiên bơ (quail) @ Cútchiêneo
Getting up to pay, I was instructed by the stall owner to sit again. It seemed she wanted me to try her other speciality, Cút chiên bơ. Coated in five spices and butter. This came with more eating instructions: I was encouraged to twist the head off at the base of neck and eat it whole, eyes, bones, brains and beak. For 3 eggs, 2 summer rolls and a whole butter fried quail I paid 40,000 VND, about £1! 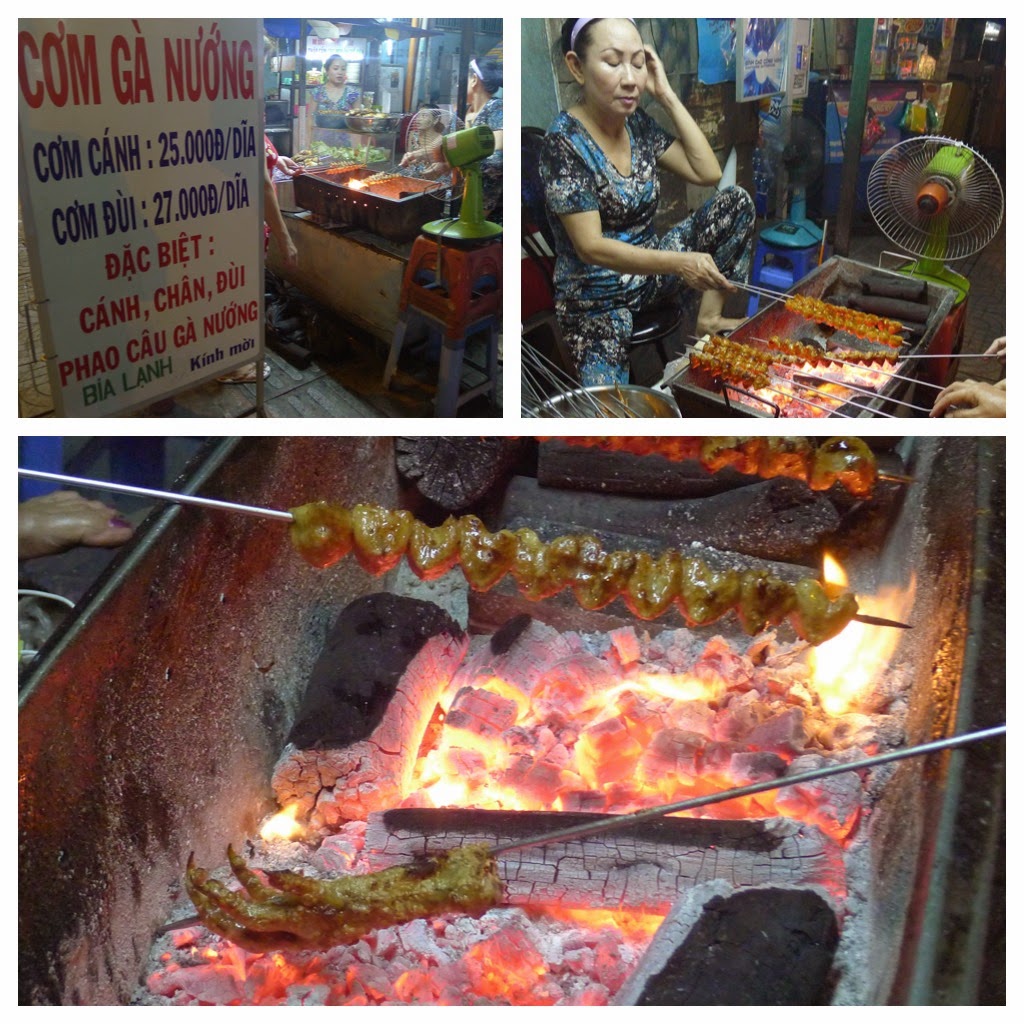 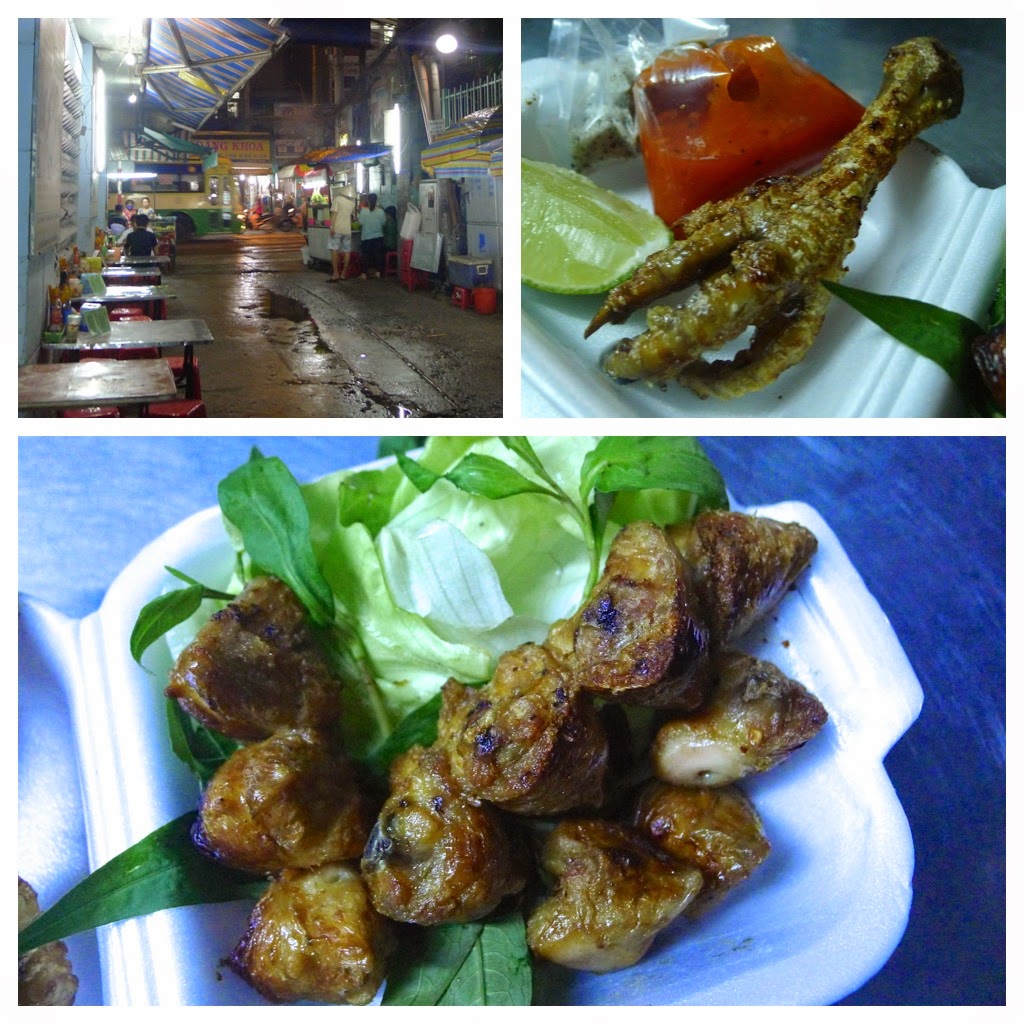 Chân gà nướng (grilled chicken feet) and a skewer of Phao câu gà nướng (barbequed chicken anus) seemed popular with the locals, so I went with that. It’s surprising what a bit of chilli, salt, lime, herbs and a few slices of đậu bắp (okra) can do to make a chicken bum appetising. 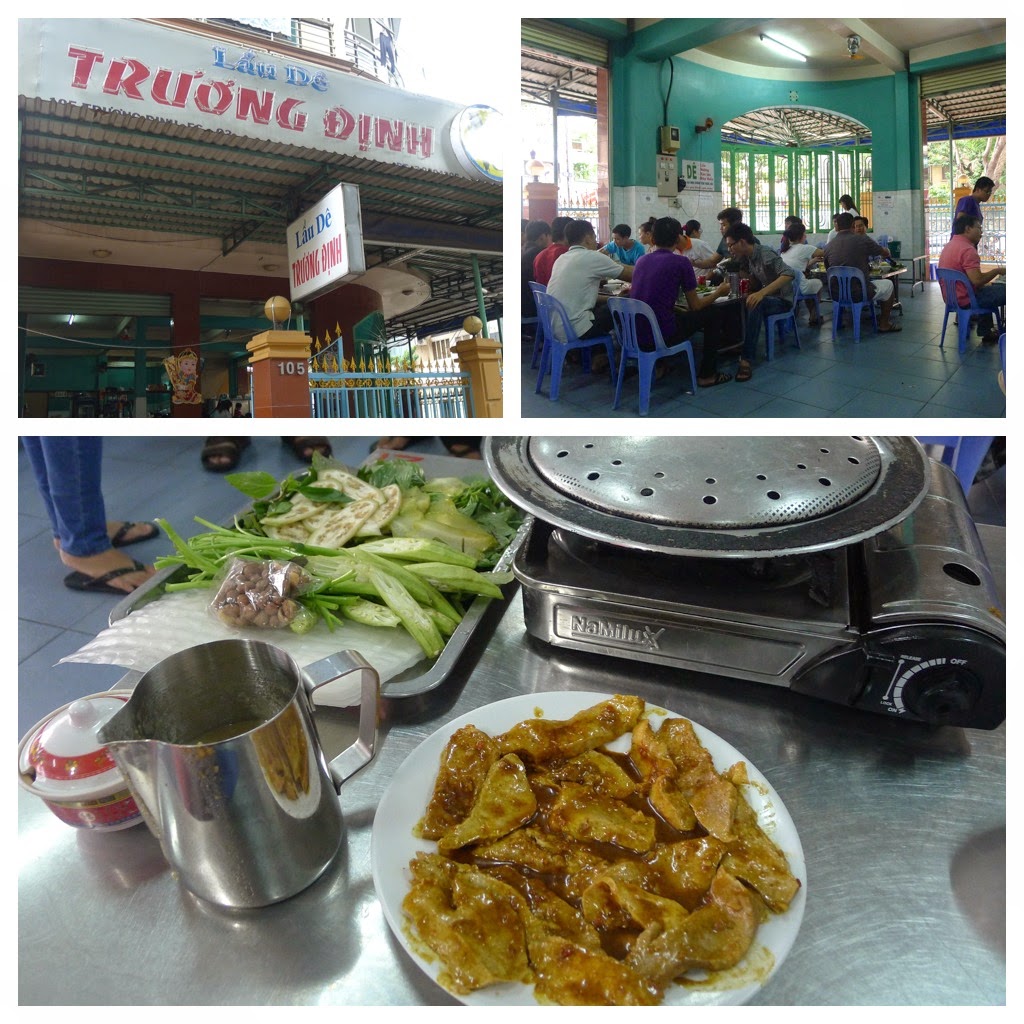 Vú Dê Nướng (BBQ goat udder) @ Lẩu Dê (105 Trương Định, Quận 3)
I fear going from BBQ chicken anus to writing about goat udders could make me look a little strange and I promise that I haven’t got a fetish for animals’ “private parts” but I am always keen to try something that I haven’t had before. As you’d imagine they were somewhat rubbery – a little more so than squid but not as much as a finger from a Marigold glove. 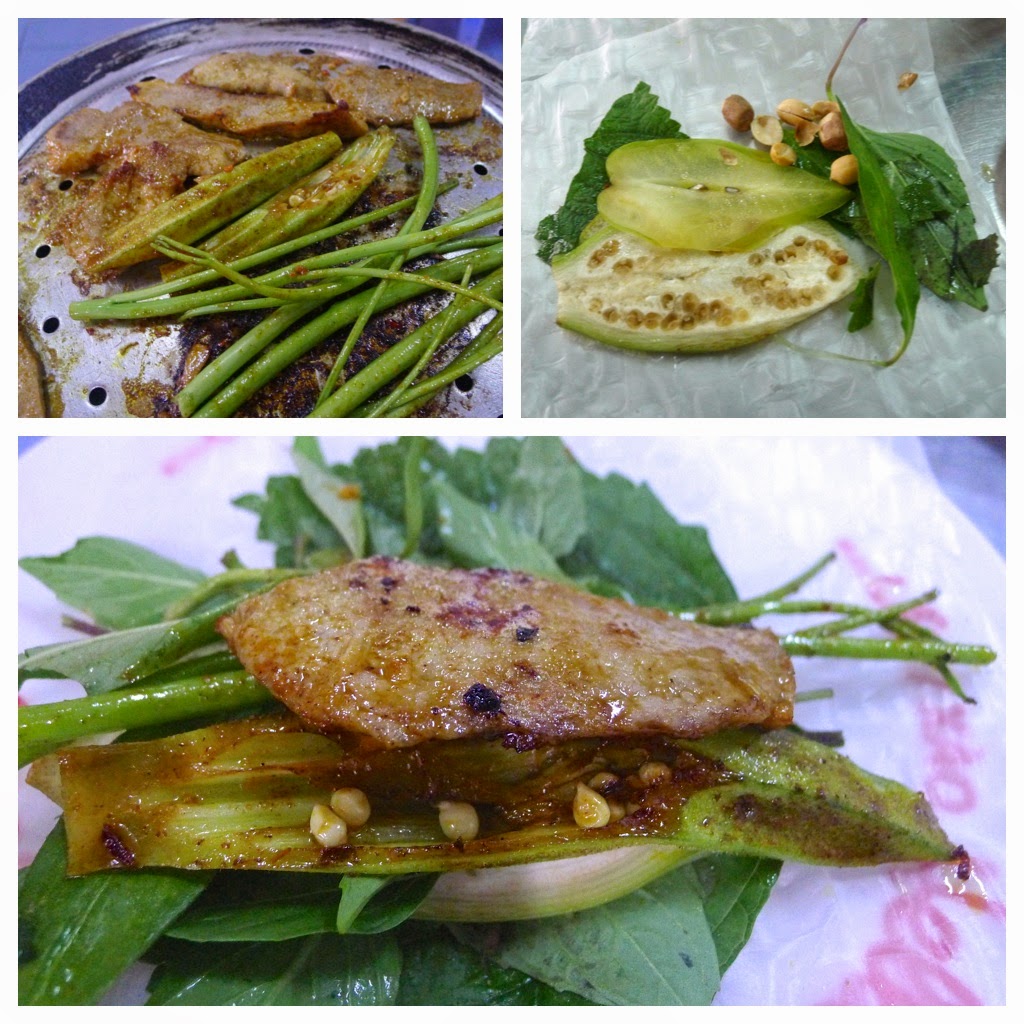 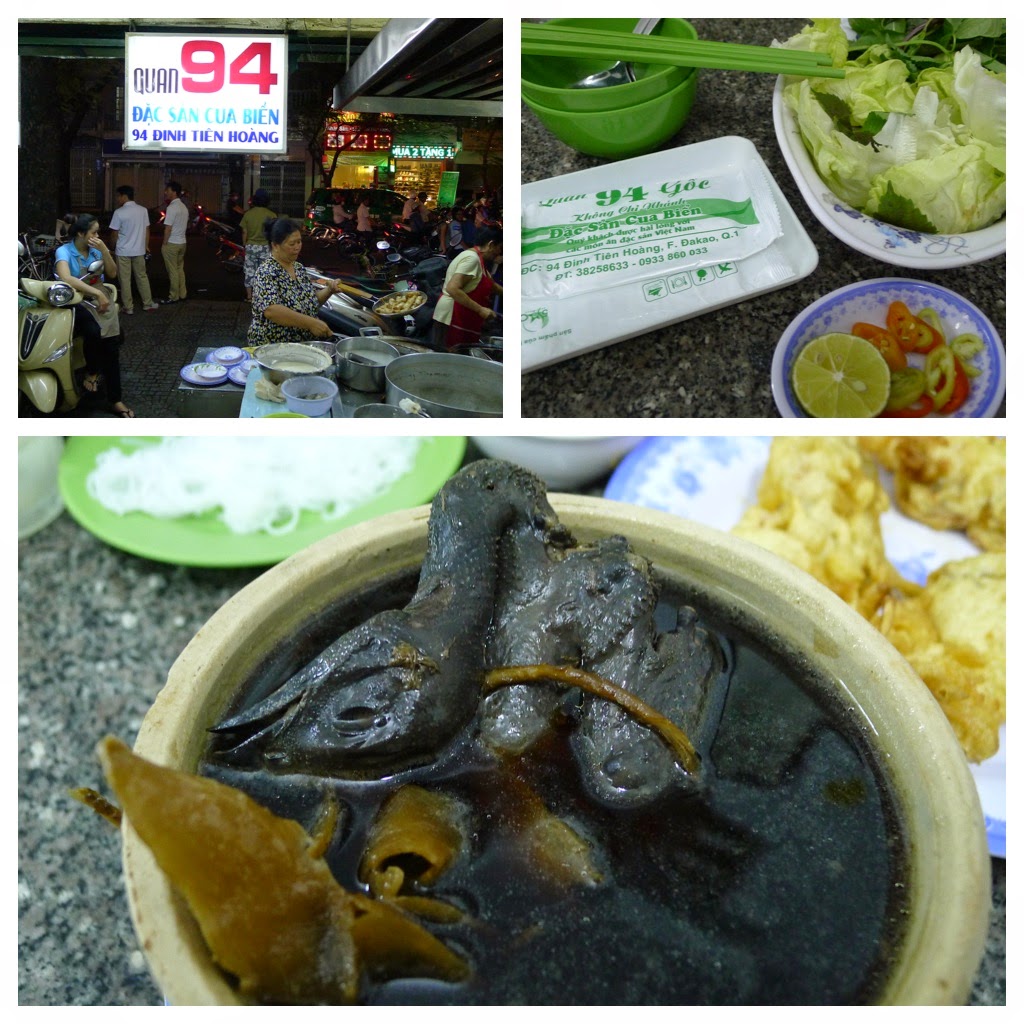 Gà ác (black chicken) @ Quán 94 (94 Đinh Tiên Hoàng, Quận 1)
I’ve wanted to try black chicken ever since seeing Ken Hom and Ching-He Huang make a traditional medicinal broth from one on a TV show. The breed in question is called a Silkie – Google them and you’ll see that they are cute with their fluffy black (or white) feathers. As well as black feathers, they also have black skin, dark meat, black bones and even black internal organs. 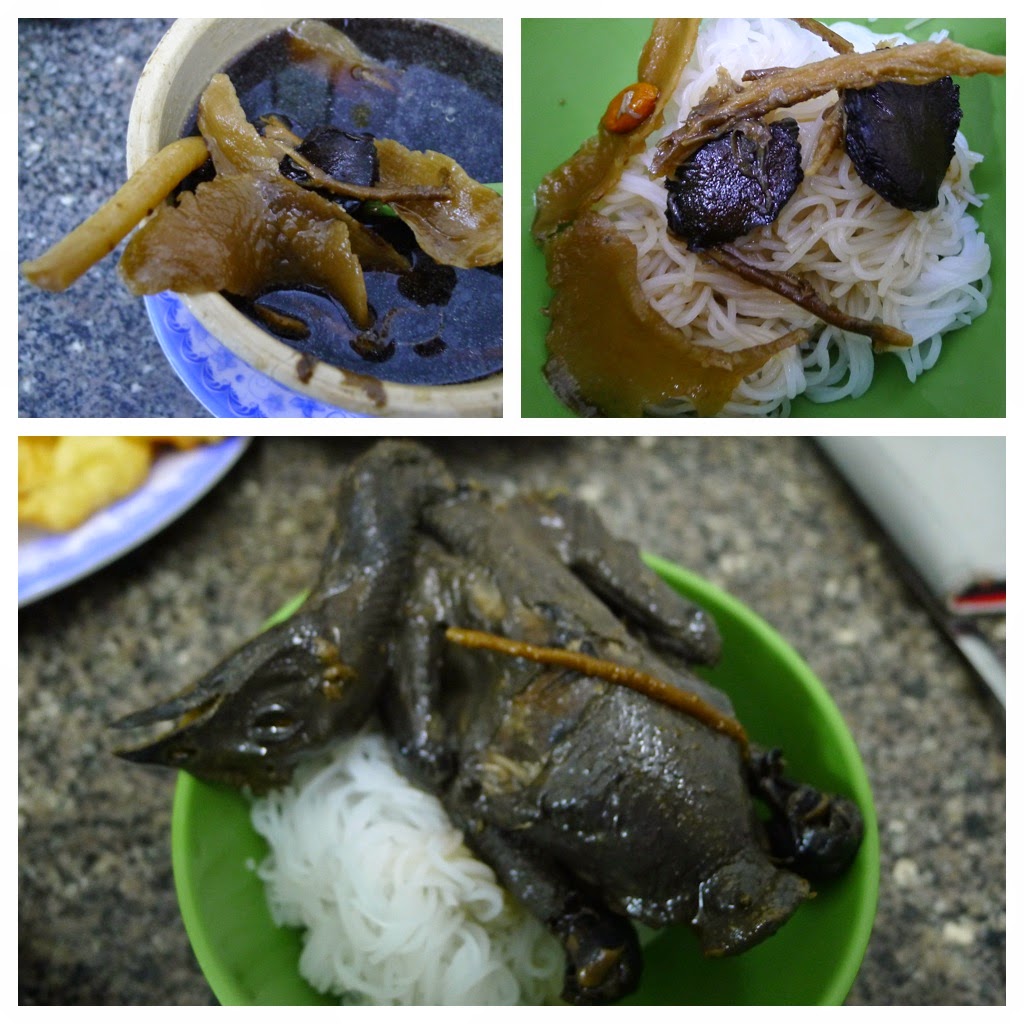 I didn’t really know what half these things were but apparently I am now guaranteed never to have a cold, backache, toothache or have problems with my spleen. To be honest, chicken aside, which was quite gamey, the whole dish lacked a little favour… maybe a seasoning issue? ;-)

BEWARE OF THE DOG!
(Don’t scroll down unless you want to read about a real dog’s dinner!)

A couple of points to make about the Vietnamese and the eating of dogs: firstly, although common enough to mean that it’s readily available, the eating of dogs is not something that all Vietnamese people do. It is more popular in the north and among the elder generations. 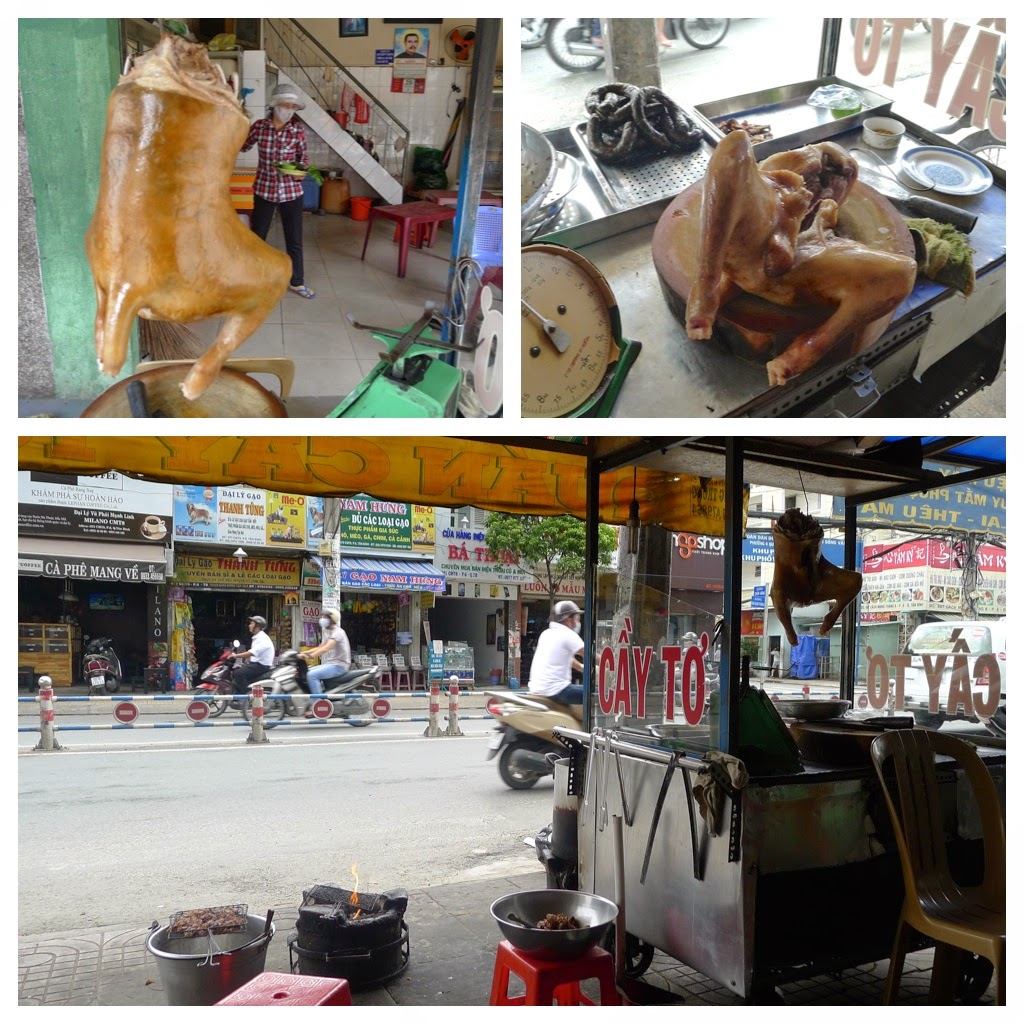 The other thing to consider is that dog meat is expensive compared to most meats. Some visitors worry that they may be served dog “by mistake” – this would be like asking for prawns and accidentally being served lobster. One of the reasons many places keep live dogs is so that customers can be assured that they are not being palmed off with a cheaper animal like goat. For this, they are commonly dispatched and prepared in font of the diner. At the place I visited I didn’t have to worry about this – the tail end was hanging on a butcher’s hook. 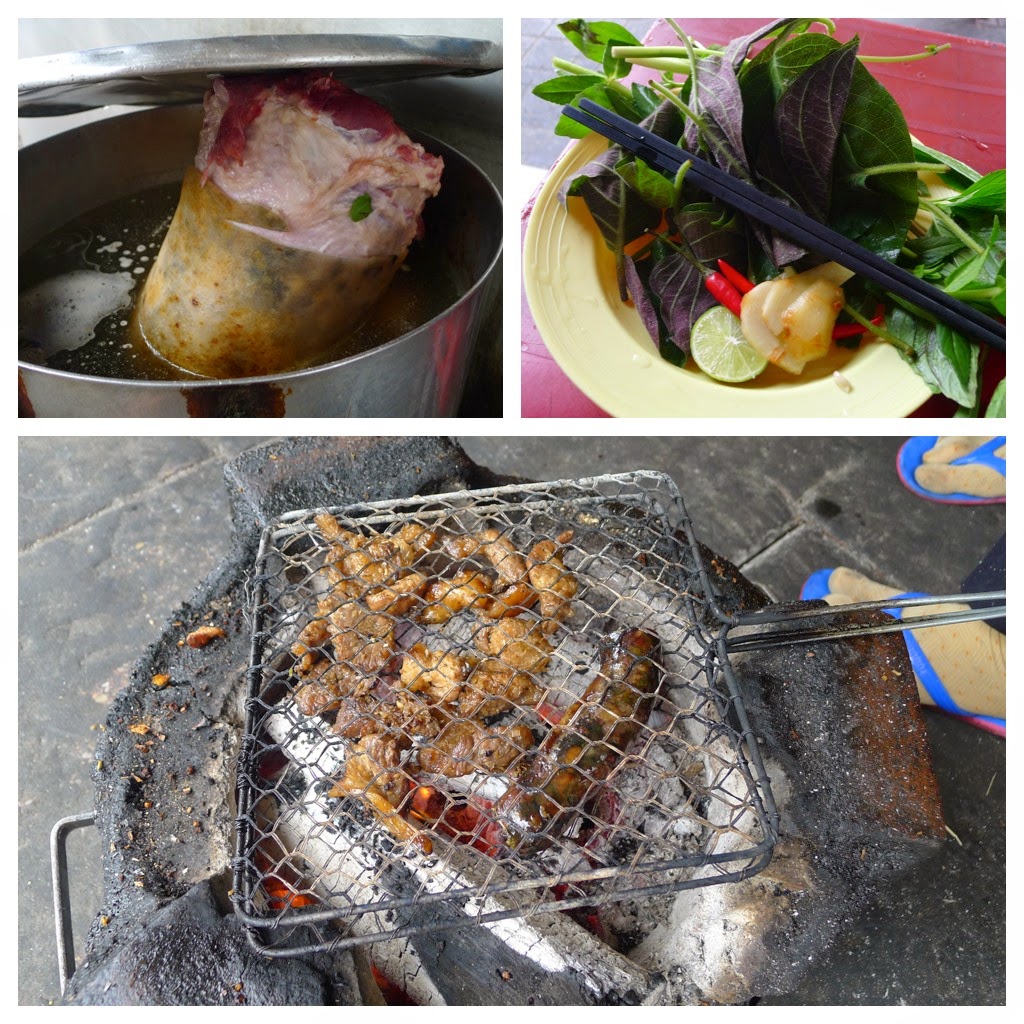 Cẩy tơ @ Quán Cẩy tơ (660A Cách Mạng Tháng 8, Quận 3)
The dish came with the meat served three ways: thịt chó nướng (grilled dog meat) thịt chó hấp (boiled / steamed dog meat) and as dồi dhó (dog sausage). To me there was no direct comparison of flavour with other meats I have had – texturally the grilled meat was similar to pieces of lamb and the steamed dog akin to duck. 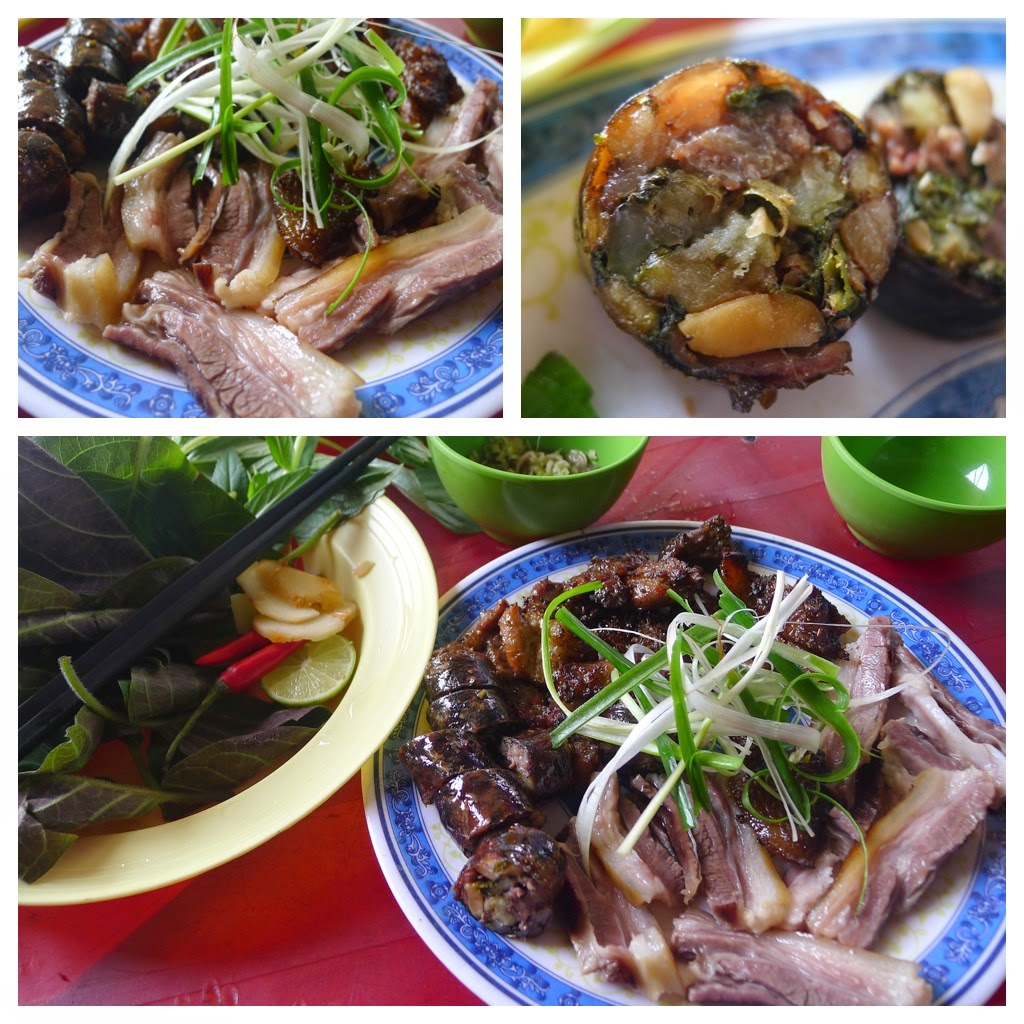 The sausage, made with the offal and nuts (when I say nuts, I mean cashew, not the dog’s bollocks) and a little spice. Like most Vietnamese dishes, this dish has it’s own special mix of accompaniments, these include: riềng (galangal), and the unglamorously named ‘Stink Vine’ leaves (lá mơ lông).

My next post on Vietnam will focus on Coffee Shops.

Email ThisBlogThis!Share to TwitterShare to FacebookShare to Pinterest
Labels: A Beginner’s Guide To..., Asian cuisine, Vietnam